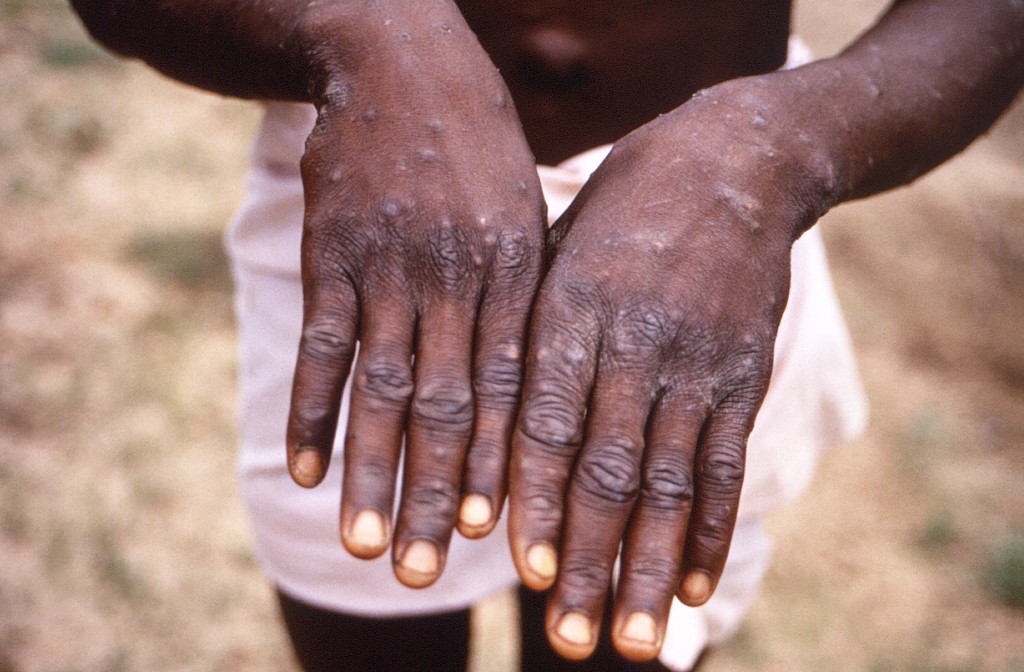 This handout photo provided by the Centers for Disease Control and Prevention was taken in 1997 during an investigation into an outbreak of monkeypox, which took place in the Democratic Republic of the Congo (DRC), and depicts the dorsal surfaces of a monkeypox case in a patient who was displaying the appearance of the characteristic rash during its recuperative stage. — Photo by Brian WJ Mahy/Centers for Disease Control and Prevention/AFP

KUALA LUMPUR (Sept 2): Fresh off most restrictions of the Covid-19 pandemic with life mostly back to normal, Malaysia and the rest of the world are now dealing with another global health emergency – monkeypox.

The current wave began in early May with the first case detected in the United Kingdom; it soon spread via human-to-human transmission to other countries in Europe and North America. To date, it has been found in 99 countries, 92 of which do not have a history of monkeypox, an orthopoxvirus. The disease used to be primarily contained in Africa and transmitted from animals, mostly rodents, to humans.

So far, no monkeypox case has been detected in Malaysia although almost all its neighbours have reported monkeypox cases, with Singapore recording the highest number at 16, according to the US Centers for Disease Control (CDC). How long Malaysia may be impervious remains to be seen as more people travel in and out of the country.

There have been close shaves – one 45-year-old Malaysian man, a resident of Singapore, tested positive in July while visiting Johor, while his acquaintances tested negative – but so far, all suspected cases have tested negative.

Experts warn that should monkeypox finally come to Malaysia, there are several factors that would determine how far it spreads.

Considering the world is still battling Covid-19, albeit to a lesser degree, the speed at which the new mutated and more infectious monkeypox strain could spread still took experts by surprise. Precautionary measures from Covid-19, such as social distancing and masking, would have been effective at keeping the virus at bay if they were in effect.

The keyword is if.

Many of the countries that first recorded human-to-human cases of monkeypox are in Europe and North America, which were the first to drop most Covid-19 precautions. After two years of limited socialising and no traveling, people are tired of being cautious and are now raring to make up for the lost time.

In other words, they are suffering from pandemic fatigue.

“When we try to recover from the pandemic, I think people just want to go back to where they were; the life of traveling, hugging, not keeping up with social distancing and gatherings. And that’s an opportunity for diseases to spread,” said Dr Rachel Ting, a psychologist at Monash University-Malaysia.

In Malaysia, while many still keep their masks on indoors as required by law, the lackadaisical attitude to wearing face masks is more obvious now that the government has dropped most restrictions. Some go about with their mask under their chin or no longer mask up indoors in offices or auditoriums.

This may backfire as this strain of monkeypox can spread via respiratory droplets, albeit in close settings. Other measures, such as social distancing and limiting contact, are no longer in effect. Monkeypox spreads more commonly via contact with body fluids, direct contact with lesions or blisters that are characteristic of the pox, and contaminated materials such as bed linens.

“(Before), people were diligent about health measures like handwashing and not being in close contact with people. But after Covid-19, they seem to not remember all these things,” Dr Nazlina said.

Dr Ting agreed, saying that the psychological toll the pandemic took on people, including depression and anxiety, may be contributing to the fatigue.

She added that pandemic fatigue could also present as social avoidance, calling for more psychological assistance for people to recover from the pandemic trauma.

Another concern experts have is over the stigma of monkeypox. Most of the cases have been reported among the LGBT (Lesbian, Gay, Bisexual and Transgender) community, mainly men who have sex with men (MSM), which is illegal in Malaysia.

University Malaya epidemiologist Associate Prof Dr Rafdzah Ahmad Zaki told Bernama the association with LGBT may drive anyone who may have been exposed underground.

“We need to be clear. Don’t have a misconception that monkeypox is only among the MSM or LGBT (community). Anyone can get it,” she said.

“So we need to remove that perception, which makes people afraid to get tested.”

She added that the stigma may cause those who have been exposed to delay getting tested, which would delay their getting treatment or cause them to self-medicate or seek help from traditional medicine practitioners.

Worse, they may continue to see people while they are still infectious and spread the disease to their friends and family.

She added awareness among clinicians was also important so that they do not confuse monkeypox with atypical chickenpox, which has reportedly happened in other countries.

Current surveillance methods include doctors reporting any case of patients coming in with symptoms of monkeypox, which include fever, fatigue, painful swelling of lymph nodes and a blister-like rash on the hands, face and genitals, among others. The doctors are required to take down the medical and travel history of the said patients, and take a sample for testing.

Health Minister Khairy Jamaluddin had said that should an outbreak occur, monkeypox vaccines would only be available for high-risk healthcare workers and close contacts.

The smallpox vaccine, which was discontinued in 1980 in Malaysia, is reported to be 85 percent effective against monkeypox. Dr Rafdzah warned that the chickenpox vaccine, however, is not.

Some facts on monkeypox remain murky. The incubation rate has been listed as between five and 21 days, while the illness can last two to four weeks. There have been reports of cases where monkeypox was transmitted sexually or asymptomatically, although the CDC was careful to say more research was needed. To date, almost 50,000 cases have been reported globally with 16 dead, the latest fatality occurring in the United States on Aug 30, according to the CDC.

Although complacency may be a concern, Dr Nazlina said monkeypox would likely be easier to contain than Covid-19 as it is not as infectious as the coronavirus. According to the World Health Organisation, the basic reproduction rate of monkeypox cases among the MSM population is above one and less than one in other settings.

“Continue with the SOP (standard operating procedure) that we have for Covid-19 and be aware of the virus if you are (at risk) of getting it from people who practice this kind of sexual activity,” she added. — Bernama