Saturday, October 1
You are at:Home»Features»A song about a mighty river 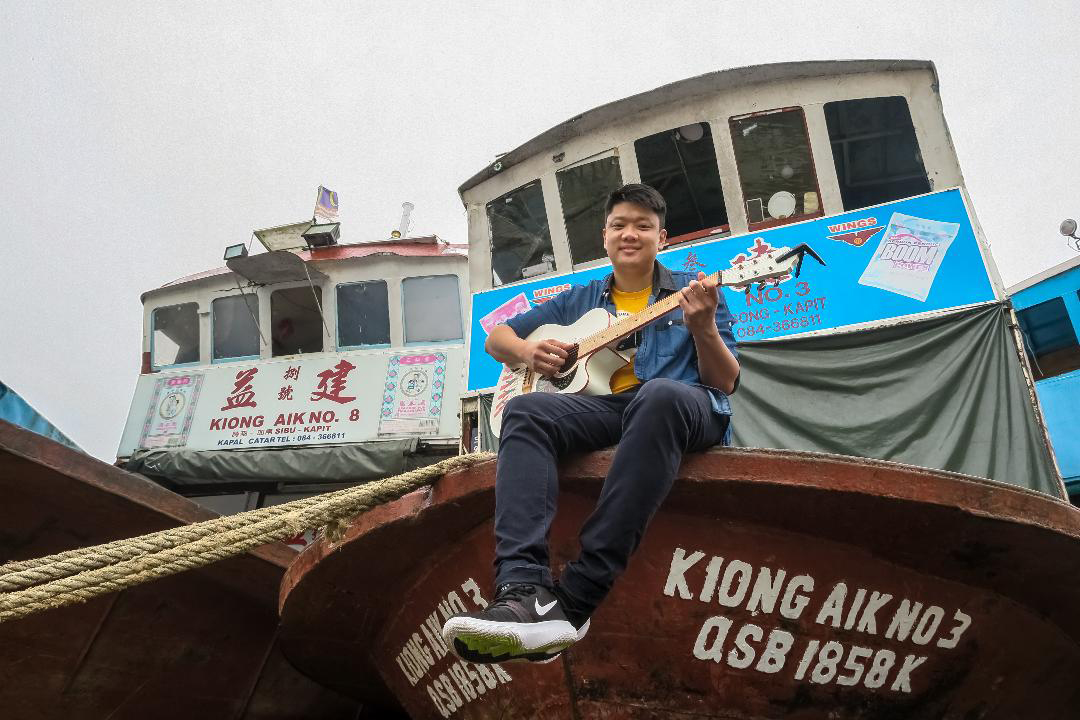 Kevin sings ‘The Great Yellow River’ on top of a vessel berthed in front of Sibu’s Tua Pek Kong Temple by the Rajang River.

FOR generations, the mighty Rajang River has been the lifeline for nearly 500,000 people, as well as the inspiration for artists and artisans.

Deriving from the Iran Mountains and running its 350 mile (563km) course to the South China Sea, the nation’s longest river is known locally as ‘Batang Rajang’.

The artist, more popularly known as Sun Yong, said the lyrics were inspired by the fertile land of the Rajang Basin, as it was when a Foochow group led by Wong Nai Siong, the revolutionary leader and educator from the Mingqing County in Fuzhou of the Fujian Province in China, migrated to Sibu at the turn of the 20th century.

Wong first landed on Sungei Merah on Jan 12, 1901 and from there onwards, the Rajang River has become the base of the Foochow settlement in Sibu.

Sun Yong, who grew up in Pulau Kerto along the river, said the lyrics highlighted the vast opportunities of the Rajang Basin, even amidst the vast migration of the local people elsewhere to seek greener pastures. 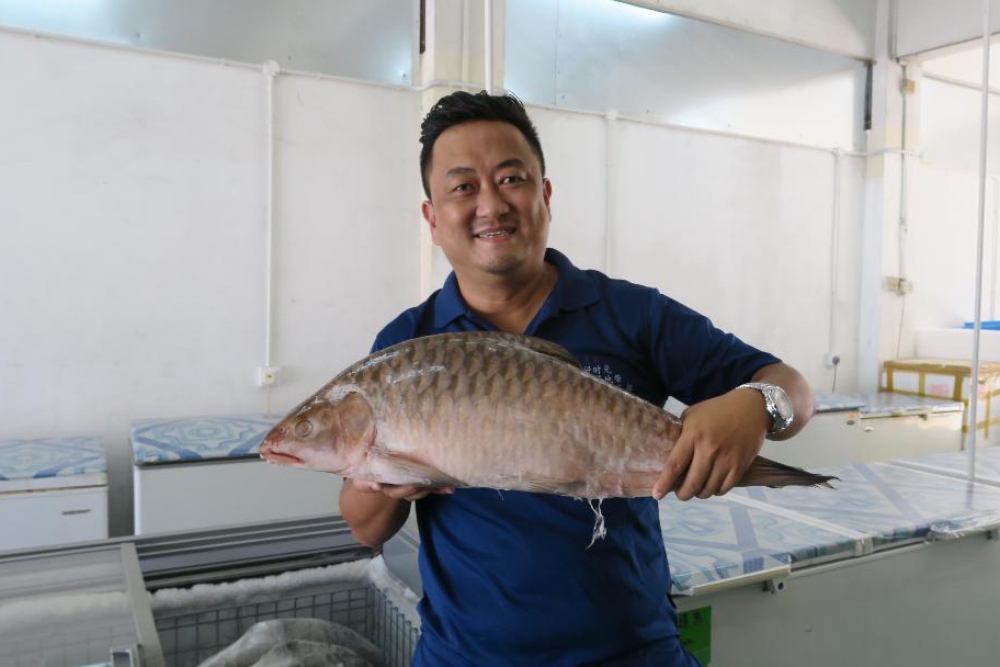 Sun Yong holds the ‘empurau’, a highly-prized fish that can only be found in the Upper Rajang River.

“Sibu is still a land of opportunities; it has its own value, rich historical background, as well as ethnic and cultural diversity that are worth exploring and promoting.

“Together we should labour and toil hard to help build a better Sibu and to make this town a window to the world,” he told thesundaypost.

After completing the lyrics, Sun Yong passed his work to his team of musical teachers for further editing and audition.

The recording for the music video kicked off in 2019, but because of the Covid-19 pandemic, everything was delayed.

“Also, since we’re all part-timers, it took us three years before the song was finally completed in 2022.”

Nonetheless, it was a labour of love for all those involved.

‘The Great Yellow River’ was sung by Kevin, and the music video also incorporated the tunes from the sape, the traditional stringed musical instrument of the Orang Ulu, to enrich the melody with some local flavours.

Sun Yong said after the song was uploaded on YouTube on Aug 2, it received more than 2,000 views in five days.

“That’s truly the best response and we are all proud of our achievements. Hopefully, the music lovers would continue to tune in to listen and support this song.” 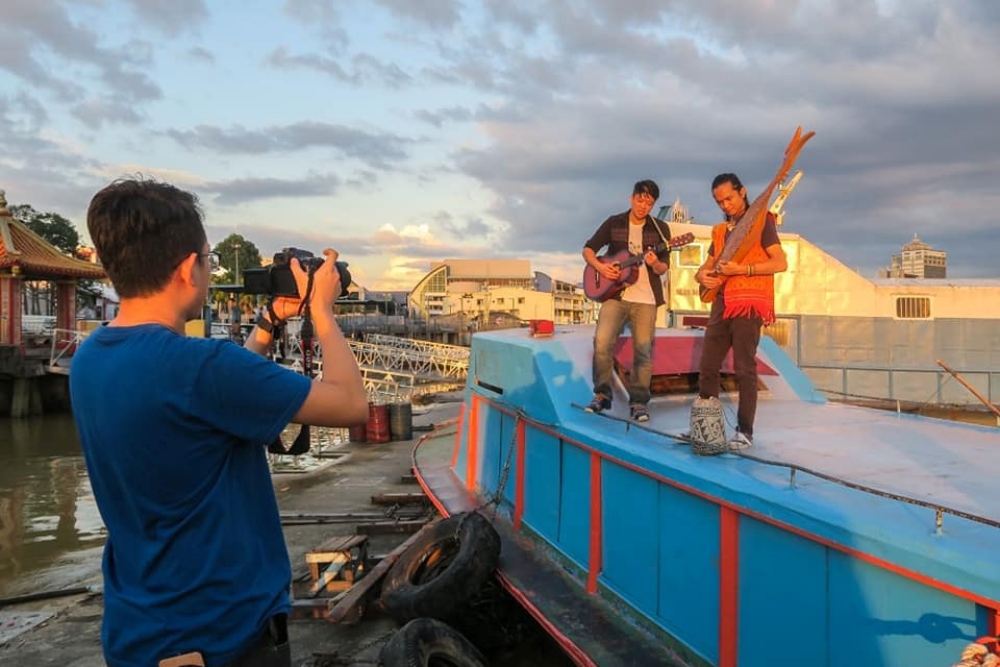 Lee (right) and Kevin strum their respective sape and guitar for a scene in the music video.

He then took a five-year hiatus, after which he returned in 2018 where he began focusing on writing Foochow songs.

To date, Sun Yong has composed more than 20 songs, nine of which are Foochow songs.

“The songs were written based on themes and also on the situation at the time when the lyrics were penned,” he said.

Citing ‘Ba Mek Nen’, which has received more than 1,700 views since it was uploaded in 2020, Sun Yong said it was about the stubborn character of the people who defied the Movement Control Order (MCO) in 2020.

On ‘The Great Yellow River’, he said it symbolised people losing hope in Rajang River and the business opportunities slipping away.

“This is represented by the big migration of people from the central region to other places every year.

“But to me, there are still lots of business opportunities to be tapped. It all depends on the creativity and innovation of the people. If there’s a will, there’s always a way, and the song also touches on that.”

Another song, ‘Xia Kampua’, was written in 2020 during the height of the pandemic where the MCO was in full force.

“The song reflected the people’s eagerness to eat ‘kampua’ (a noodle dish) but could not do so due to the threat posed by Covid-19 and the ongoing MCO at the time. And it also highlighted kampua as the best Foochow food.”

Sun Yong said the whole idea of writing Foochow songs was to promote the dialect, which was not widely spoken among the younger generation of the community.

“The children nowadays rarely speak Foochow in their conversations; the most common spoken dialect now is Mandarin. Gradually, there’s a great possibility that the Foochow dialect might be wiped out one day.”

Sun Yong said it was also his acquaintance with Kevin that convinced him to write songs with Foochow lyrics.

“Kevin has always been singing Foochow songs. When I came to know about him, I contacted him for support and collaboration – and the rest is history.”

Sibu-born Kevin, 36, currently resides in Kota Kinabalu. He has been away from Sibu for more than 15 years.

Being a church choir member, Kevin is an ardent singer – occasionally, he would pick up his guitar and sing away during his leisure hours.

“Once, it crossed my mind to compose Foochow songs just for the listening pleasure of those from Sibu who were away from their hometown.

“This is one way to promote Foochow culture and also for them to reminisce the good days of Sibu, especially for those who have been away from home for a long time.”

In 2006, Kevin came out with his first Foochow song ‘Huyew’, or ‘Pepper’ which Sarawak is famous for; followed by another Foochow number ‘Da Kah Ya’ (Life Is Like A Bicycle), which has received more than 11,000 YouTube views to date. 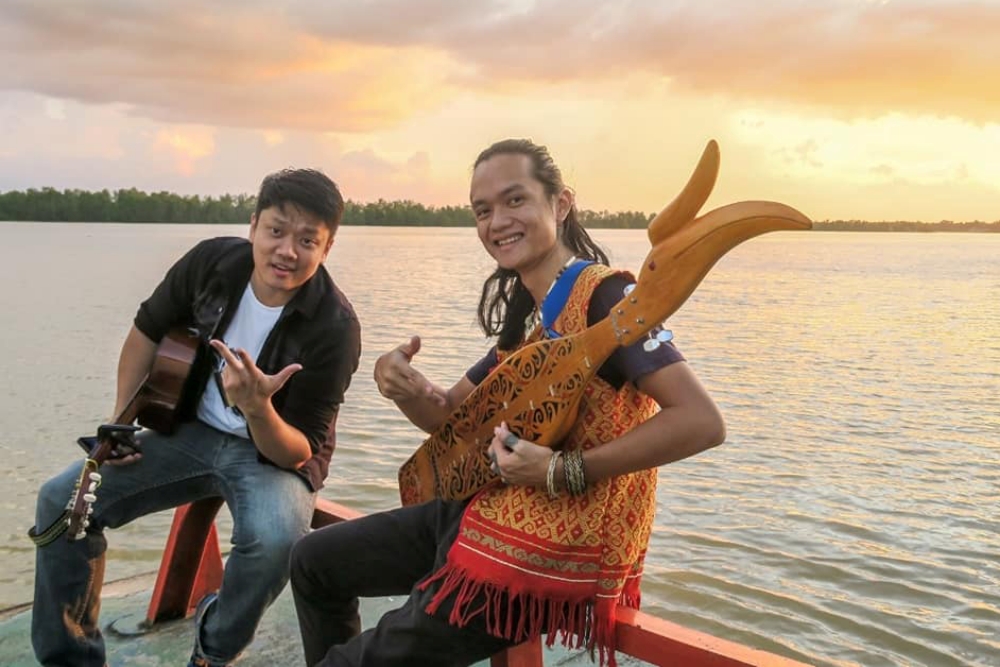 Kevin (left) and Lee during a break from filming of the music video, with the Rajang River serving as the background.

Not long after, he received an invitation from Sun Yong to join forces in capitalising on Foochow songs to promote Sibu.

“The first song that we worked together on was Mai Lei Xia Malaysia, which took us several months to complete. More Foochow songs followed soon after,” said Kevin.

On ‘The Great Yellow River’, Kevin did the music composition and Sun Yong, the lyrics.

“We then roped in Evan Lee, also known as ‘Kitai Anak Borneo’, to handle music arrangements.

“Lee also injected some local flavours into the song using different types of instruments such as the sape, the ‘er hu’ (traditional Chinese stringed instruments, similar to violin) and some traditional percussions to enrich the sound and the rhythm.” 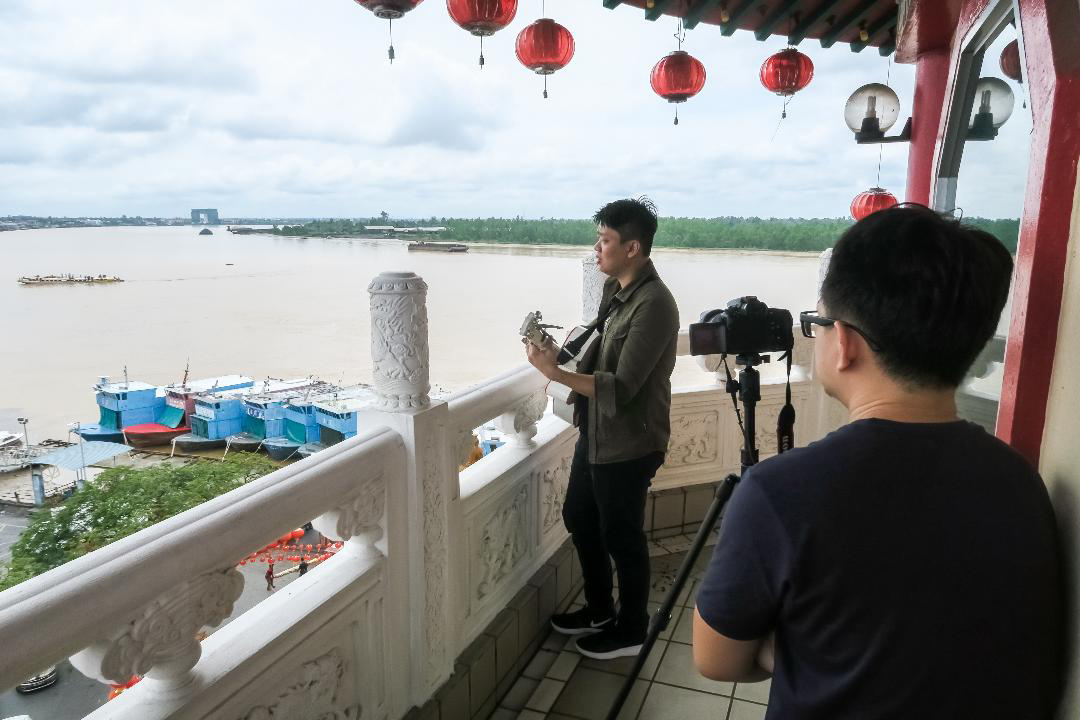 Kevin in action during one of the music video’s scenes shot at a top level of the pagoda in Sibu’s Tua Pek Kong Temple, where the Rajang River is in clear view.

The music videography and editing were done by Jordan Yong, the youngest member of the team, with most of the filming being done around the vicinity of Sibu’s famous Tua Pek Kong Temple. 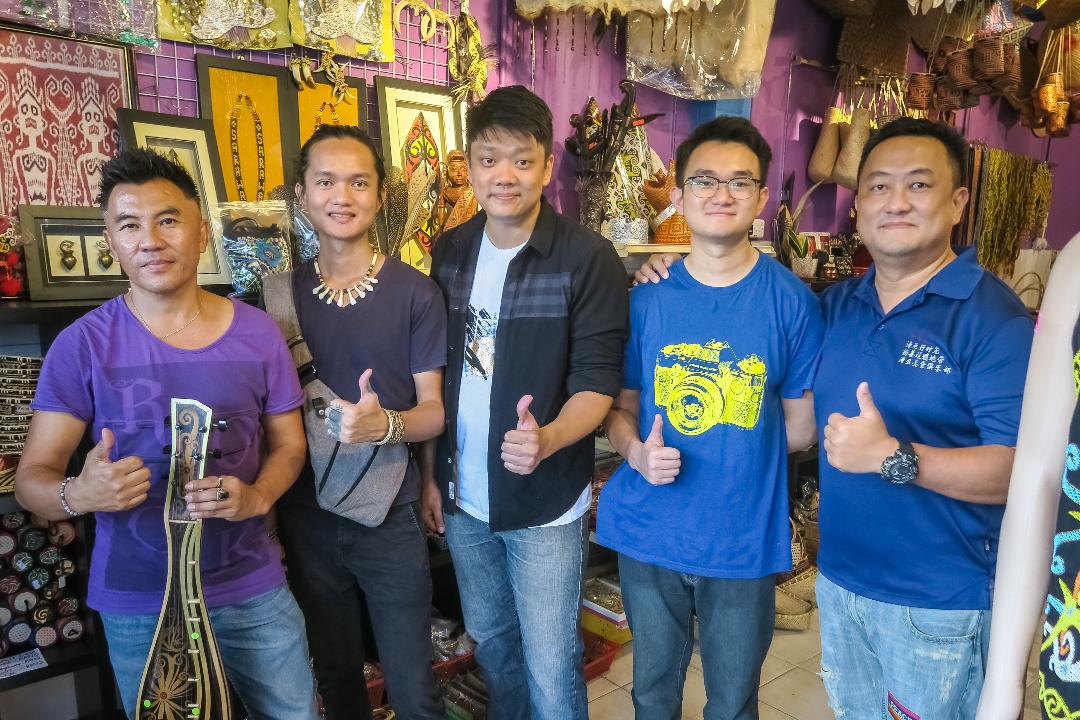 (From left) Peter, Lee, Kevin, Jordan and Sun Yong inside the handicraft shop at Jalan Raminway, one of the shooting locations for the music video.

“I am happy with the success of ‘The Great Yellow River’,” said Kevin.

“We would definitely continue to work on and produce more Foochow songs.

“We would continue to work hard and ensure that the Foochow songs produced by us would achieve a certain degree of recognition,” he added. 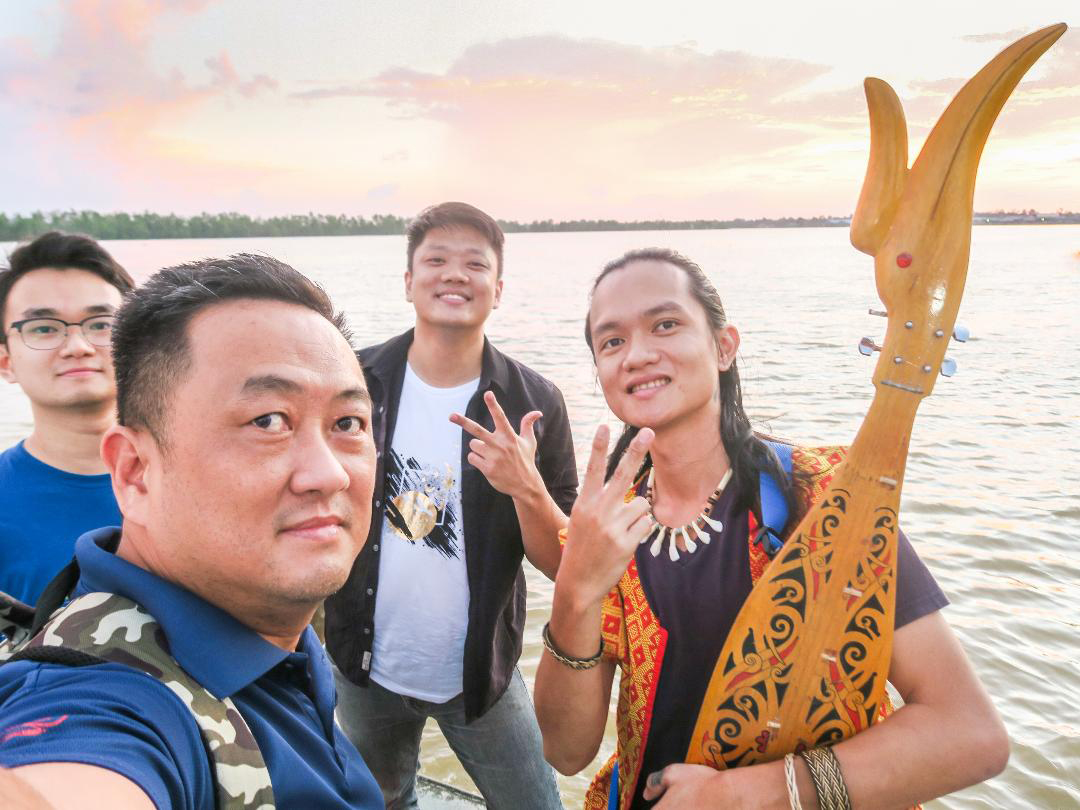 (Back, from right) Lee, Kevin and Jordan pose as Sun Yong (front) handles the phone camera to take a wefie.

However, Kevin did admit that despite having established himself as a Foochow singer, he would need to polish up his day-to-day spoken proficiency of the dialect.

“Since young, I have rarely spoken Foochow and like many children of my generation, our main spoken language at home is Mandarin. That could be the reason why many Foochow children these days hardly speak Foochow.”

To improve his command in the dialect, Kevin said he would always go to his parents for guidance.

“There are some Foochow words that I rarely know of; thus, it would take tons of effort to memorise the vocabulary.

“Nonetheless, we will continue to sing Foochow songs to help promote Sibu, whether it is for the food industry, for tourism or for the preservation of the Chinese cultural heritage here.

“Someone have to do something to ensure that the Foochow dialect remains relevant.

“If nothing is done to preserve it, then the risk of this dialect becoming extinct is a possibility,” he added.