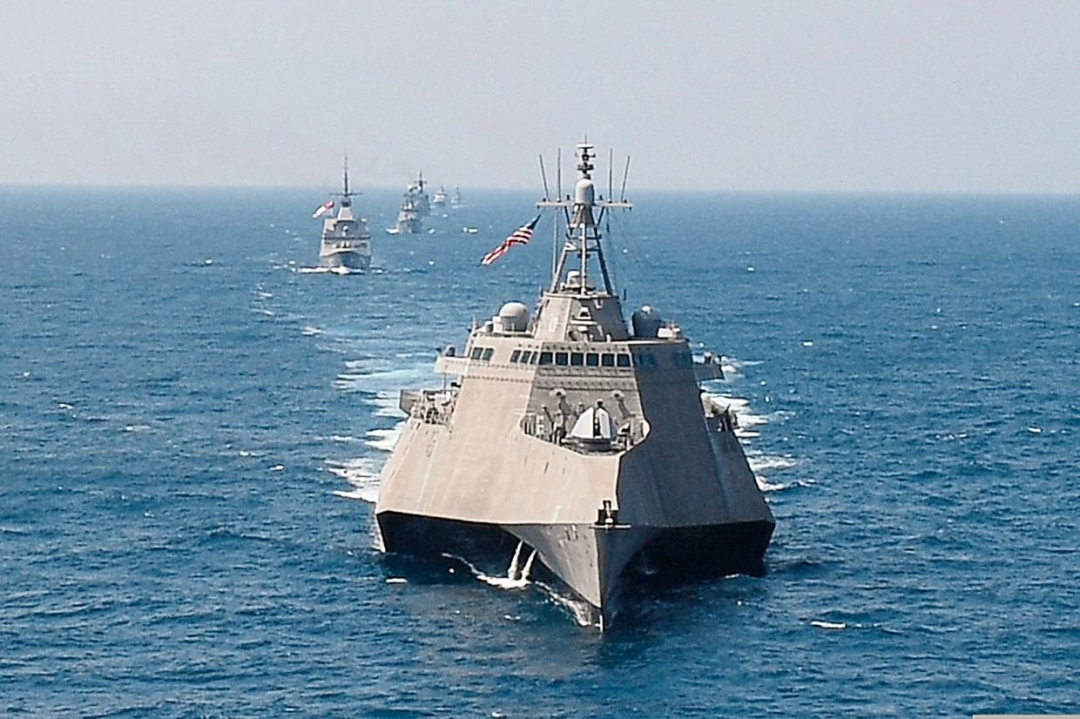 A 2019 file photo of US Navy’s littoral combat ship ‘USS Montgomery’ sailing in formation with Asean navy ships during an exercise in the Gulf of Thailand. — AFP photo

Such ships would be a boost to the existing fleet, playing a complementary role in patrolling our territorial waters. At least five of them should have been launched by last month.

By October next year, the sixth ship would be in service too.

Imagine the excitement of the Navy boys!

And think of the psychological effect this would have on the coastal inhabitants in both regions of the Federation – the assurance of security and the sense of pride in their own naval ships.

Would have… it’s not happening. Despite the fact that a huge sum of money (RM6.038 billion) is said to have changed hands, not one of the vessels would be launched any time soon. Not until two years’ time, the Minister of Defence Datuk Seri Hishamuddin Hussein, has assured.

A real let-down for the taxpayers!

The Americans and the British name some of their battleships after their great statesmen or members of the royalty.

We name our ships after heroes, real and legendary.

One night I was reading about the heroes of pre-Malaysia and post-Malaysia until I dozed off.

One of the new ships, christened Awang Anak Rawang 3617, was in port at Senari. Droves of people were braving the drizzle and waiting in a queue to get on board and talk to the sailors.

It was so vivid, but only a dream!

In real life, however, I wish that one of the ships be named after Bujang Malaya (The Malayan Hero) and the winner of the George Cross, the civilian version of the Victoria Cross, the highest award for gallantry given to the bravest of the military men of any country in the Commonwealth of Nations of which Malaysia is a member.

Just to get this straight – a ‘Bujang Malaya’ is not a Malay bachelor, it’s a Sarawak soldier, usually Iban, who served in the Malay Peninsula during the Emergency.

Back to the ships. By the time all these vessels are commissioned and delivered to the Navy, there will likely be cost overruns by at least one billion ringgit. Another hole in the pockets of the country, this financial burden will be borne by all Malaysians sooner or later.

These extra costs would not have been necessary had the choice of builders of the vessels been without controversy. The Navy, the end user of the vessels, should have been allowed to pick the best types of vessels and choose their builders carefully. After all, they’ll be responsible for the running and the maintenance of the assets. With due respect, the politicians should have heeded the views of the Navy.

While the authorities are sorting out the problems relating to the implementation of the project – who should have done what or who should not have done which – the rest of us must send a signal to the government. We want those ships built and commissioned as soon as possible.

Stop dithering. Too much is at stake in terms of national security. Ours is the case of security at all costs.

Once we’ve got the ships, we’ll need a crew. I wonder how many of the sailors among our Navy boys are from Sarawak and Sabah. I don’t remember having heard or read about an active campaign to recruit boys from this region for the national Navy.

Are Sarawakians and Sabahans missing the boat?

Sometime ago, I met with several young Iban boys in Kuching. They were going to work on the oil derricks overseas; one of them was on the way to Dubai and another farther afield, in the direction of the Gulf of Mexico. They were divers, machine operators, security guards and cooks.

I asked if there were any among them interested in joining the Malaysian Navy. Calling yourselves Sea Dayaks!

They said that they would prefer to work in the oil and gas industry – more money and regular off-days onshore to spend that bundle of notes, some to be remitted to the wife or mum.

Admiral, please take note: if you can match the pay and conditions, there are lots of trained, experienced marine technicians available in Sarawak!

Back to the ships. We need them now, to reinforce the current assets so that we are assured of national security. The estimated RM11 billion, including possible overruns, is a lot of money, but the investment in the security of the country is not measured in terms of money alone. The security of our territorial waters and the sovereignty of the country far outweighs the spending of such money on vital national assets.

Whoever will form the next federal government of Malaysia must ensure that our territorial waters are fully protected from incursion by illegal foreign vessels. The illegal foreign fishermen have been plundering our marine resources for years and we are helpless to do anything about it, except for occasional arrests of fishermen and confiscation of frozen fish.

The presence of littoral ships in our territorial waters and within our Exclusive Economic Zone (EEZ) is therefore vital. Acting in concert with other vessels from the Marine Police and the Maritime Agency, the combat ships will ensure safety to our fishermen as well as the territorial integrity of our nation.

The government and the agencies responsible for the actual management and the progress monitoring of the whole project must ensure that whoever has caused the delays in delivery of the ships will be dealt with according to the law.

Previous ArticleA song about a mighty river
Next Article YES Prime Minister to ‘Keluarga Malaysia’, but …