Saturday, October 1
You are at:Home»Features»Nothing can break her soul

Counsellor sees cancer as an experience that only makes her stronger, says she is in charge of her own journey 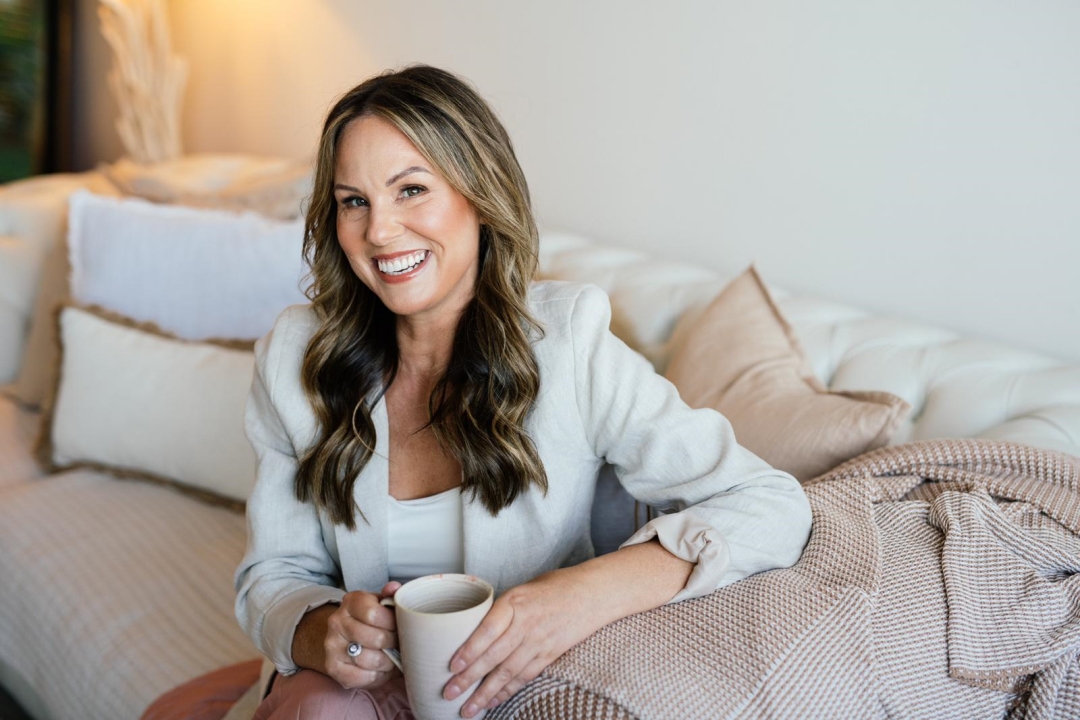 Today, Burke is a counsellor out to inspire people to take action in and change their lives.

WHEN Genevieve Burke was diagnosed with breast cancer at age 42 in 2017, she never once asked why it happened to her.

Her response: why not her?

“I am in charge of my journey and I would not allow anyone else to say what my journey should be, or for how long I would live.

“This is between me and the Creator,” she stood adamant.

Little did she realise that there would be more to the story yet to unfold.

‘There’s no history at all’

Despite her response, this mother of two admitted that the cancer diagnosis came as a total surprise for her as there was no history of cancer in her family.

“Everyone’s healthy – there’s no history at all. It was very surprising, confusing and confronting all at the same time, completely out of the blue.

“I did, though, have an aunt who died of leukaemia 38 years ago; I was only a small child then.

“Nobody in the family had breast cancer.”

She was working as a chef and at the same, raising her two children, with the help of the children’s father.

One day in 2017, while doing housework, she felt a lump in her armpit.  She thought it was her blouse that was all bunched up.

However, when she pulled up her shirt and felt the same spot, the lump was still there.

“It felt like there’s a marble inside there; I sort of could move it around. I could feel it, but I did not think too much of it (as) life’s pretty busy and a bit stressful.

“So, I went to the doctor for another reason, just to have a chat about some women things. At that moment, I just said: ‘Oh, by the way, I have this lump underneath my arm’.

“And the doctor said: ‘You must have a mammogram and ultrasound straight away’.”

Burke booked an ultrasound session, where the doctor discovered that she had a lump in her breast and in her armpit.

“I didn’t know that I had a lump in my breast. It was very traumatic – lots of feelings going through my mind, but 10 days later, I began my chemotherapy.

“So, it struck in a very short time – making big decisions, gaining as much information as I could, listening to the doctors, and really taking action as quickly as I could.  That was the start of my journey in 2017,” she told thesundaypost in Sibu.

Burke said the doctor, whom she had known since she was a teenager, told her that her condition could be addressed as long as she followed all his instructions.

Nonetheless, he also told her that she would need lots of help and support in the process.

Burke’s first thought was to protect her children from this trauma. 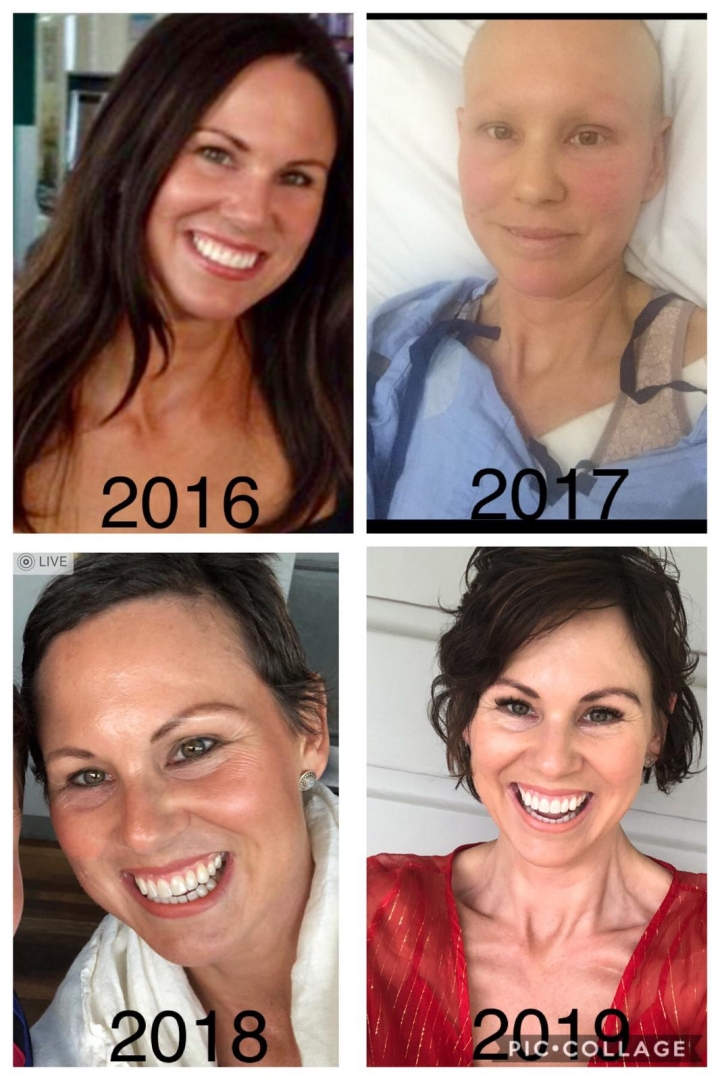 Burke says the last five years have been tough, but they only serve to make her stronger.

The day she found out that she had breast cancer, she rang a friend and asked if her children could have a sleepover at the latter’s.

Burke then arranged for her parents and a few friends to be at her house that night.

“I knew that there would be lots of adult conversations and I did not want my children to see the first round of reaction.

“That’s very important to me. I am the mother, and it is my job to protect the children.

“I needed a 24-hour period to be able to have some adult conversations, while processing the information myself,” she said.

Burke then broke the news to her children the next day, assuring them everything was going to be fine.

She explained to them that there were few cells in her body that were not working right and she had to get some treatment to fix those cells so that they would not create further problems.

“They did ask: ‘What’s the problem in the cells?’ to which, I said a couple of cells had some cancer in it, which could be fixed.

“They’re not silly children – they understood as soon as they heard the word ‘cancer’,” she recalled.

Burke said her eldest daughter – three years older than her brother – had asked: “Would Mum lose her hair due to the treatment?”

“I said I did not know. I did say to her that if I did lose my hair, it showed that the strong medicine was working.

“We did not cry. I cried and my parents cried the night before, but not with the children.

“If the captain of the ship was calm, the crew would stay calm. The last thing you’d want to see was the captain getting off the boat when it crashed into an iceberg,” she pointed out.

One bad news after another

After that, Burke underwent the treatments, which included surgery, chemotherapy and radiation.

Following those, she began rebuilding her body – eating healthy, walking, and doing yoga every day from thereon.

Everything was going well – until it was not.

In 2020, while doing some push-ups, she fell and sustained bruises on her collarbone. Thinking that she might have hurt herself, she stopped doing push-ups and started taking walks again. 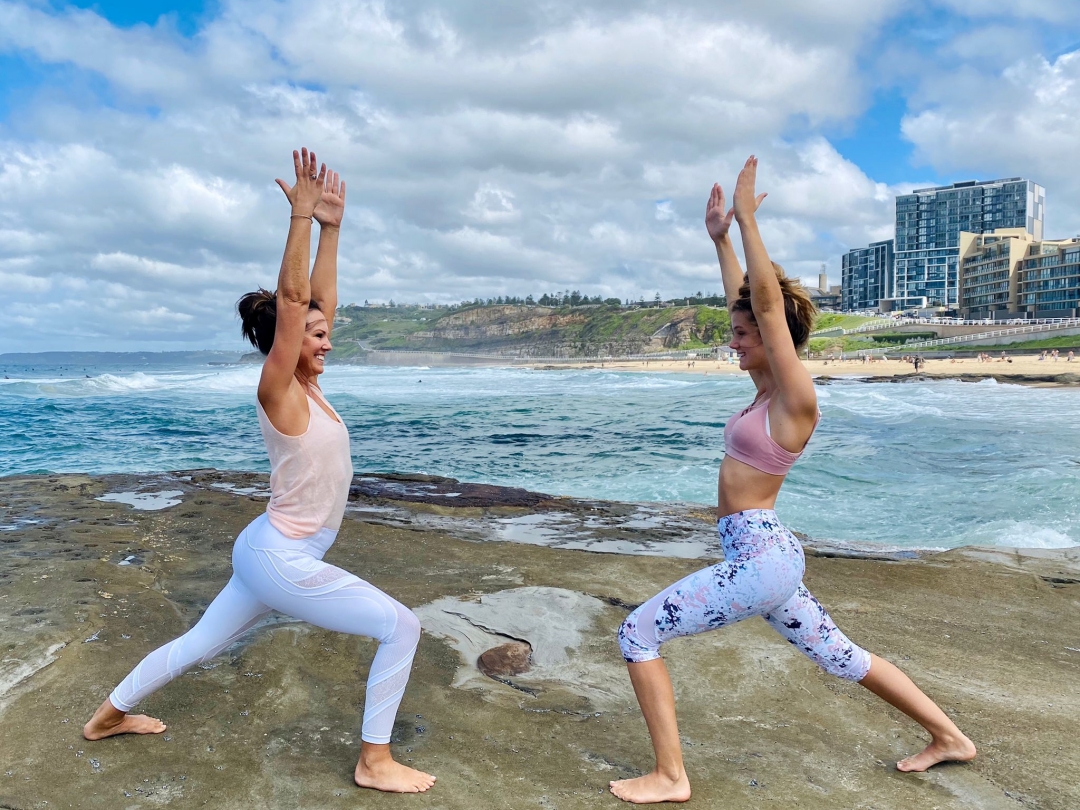 Burke (left) during a yoga session with Molly on the beach in Sydney.

As weeks went by, however, she felt soreness in her collarbone and her arm, to a point where she had to use a paper cup because it strained her to lift a coffee mug.

At times, her arm would get too weak even to use her knife and fork during a meal.

The situation led to her undergoing a scan, which brought another bad news.

“It’s discovered that I had a tumour in my sternum, and the tumour had broken the bone.

“The broken sternum was the cause of the excruciating pain,” she said.

This necessitated radiation, which diminished the tumour inside the bone, and within three days, she was no more in pain.

“I had three doses of radiation, and I did another few months of chemotherapy, which caused me to lose hair for the second time.

“Half of the year was spent on getting the treatments and recovery, but after that, I could do push-ups again.

“Once again, I felt fit and strong again,” she said. 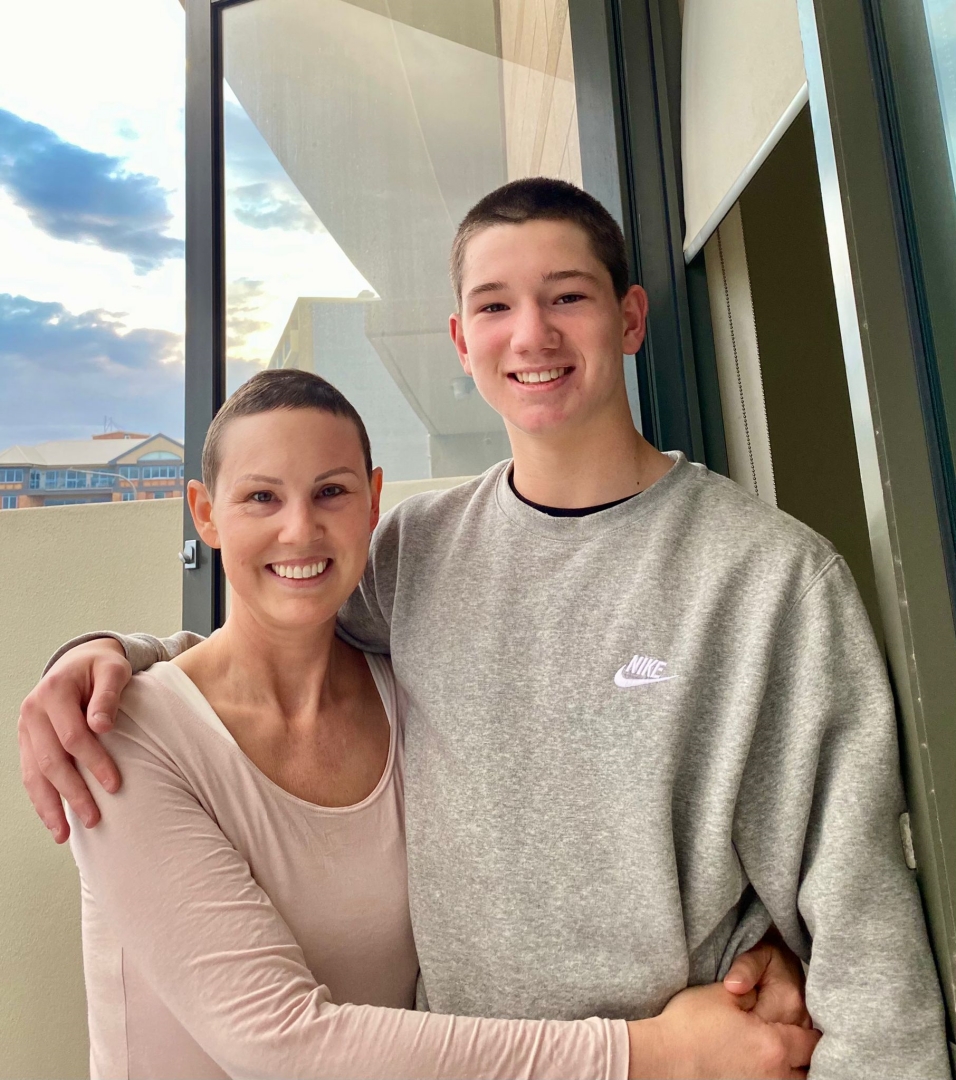 Burke loves this photo of her and Jackson, with her army haircut matching that of her 17-year-old son.

Burke thought that would be the end of it, but another thing happened at the end of 2020.

She described it as ‘the most unusual experience’: she felt like fainting, her vision started to get blurry, her hearing was also fading, her face ‘melted’, and her speech was affected – it was like she was down with a stroke.

Burke was rushed to the hospital where, based on the symptoms, the medical team there also thought that she had a stroke.

However, within an hour she could speak again, her vision came back, and her hearing returned just like normal.

Two days later, she underwent a Magnetic Resonance Imaging (MRI) scan and the result was devastating – Burke had cancer in her brain, and what she had experienced a couple of days ago was a seizure, not a stroke.

She then underwent 20 doses of radiation of a specific type – a procedure that required careful planning so as to not damage her brain.

Bright side of life 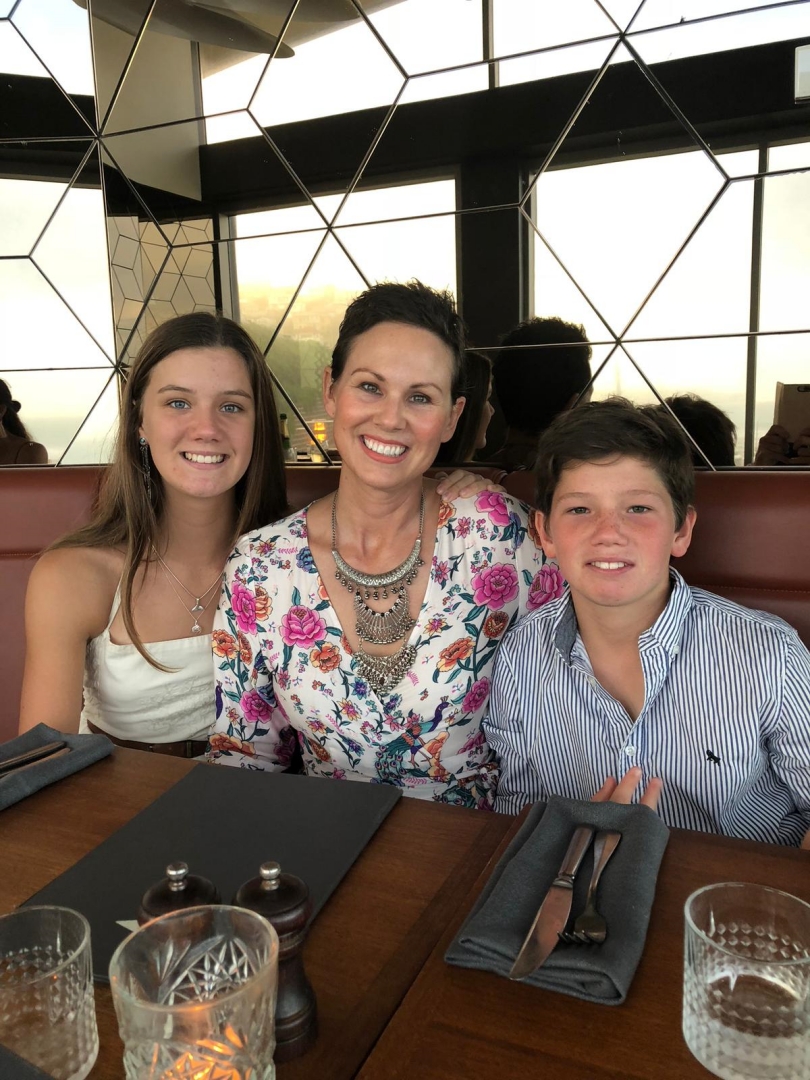 Burke with her children, Molly and Jackson, in a photo taken one year after her breast cancer treatment.

“I have this device in my shoulder called a ‘port-a-cath’.  Every 21 days, I would take this medicine; it is a very powerful medicine but it is good, as it does not have many side effects.

“Your hair can grow.”

Burke does not see herself as ‘fighting anything’, despite the adversity.

In this respect, she is grateful for the professors and the ‘medical folks’ who have spent their lives saving others.

She also believes that cancer has made her stronger.

“You do not know how strong you are until you have to be strong,” she underlines, while expressing her gratitude to her family and friends who have always supported her.

“My children, Molly and Jackson, are my best friends – they have always been there for me throughout the journey.” 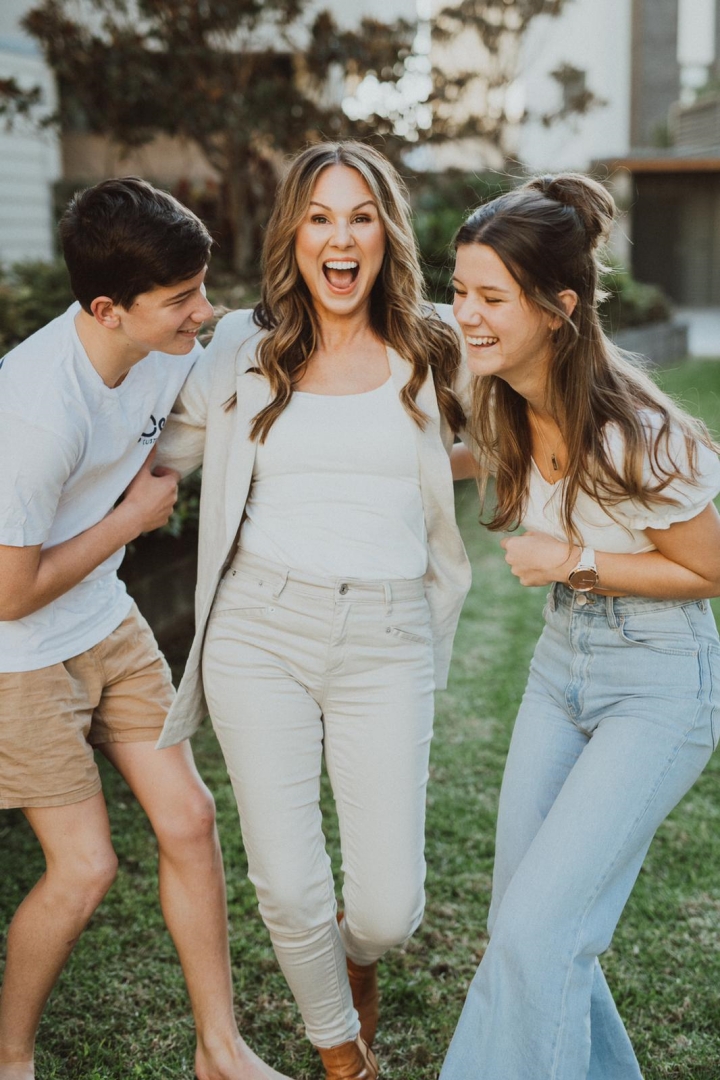 Burke with her ‘best friends’, Molly and Jackson.

Having quit her job as a chef because of cancer, today Burke is a counsellor out to inspire people to take action in and change their lives.

She points out that one of the things that have enabled her to overcome adversity is because she has chosen faith – believing in the best possibilities available to everyone.

According to her, most of the people whom she has counselled share a common thing – the fear of being rejected and not being ‘good enough to be loved’.

“You are being put on this planet to fulfil your purpose, not to fulfil other people’s purpose.”

She believes that everyone’s dreams are important, but it is not enough to just dream them.

“They have to take action – this is the part where most people are struggling.

“Your minds are tricking you into not being able to do certain things, but you have the resources within you right now – you always have.

“That’s what I found out when I had cancer.” 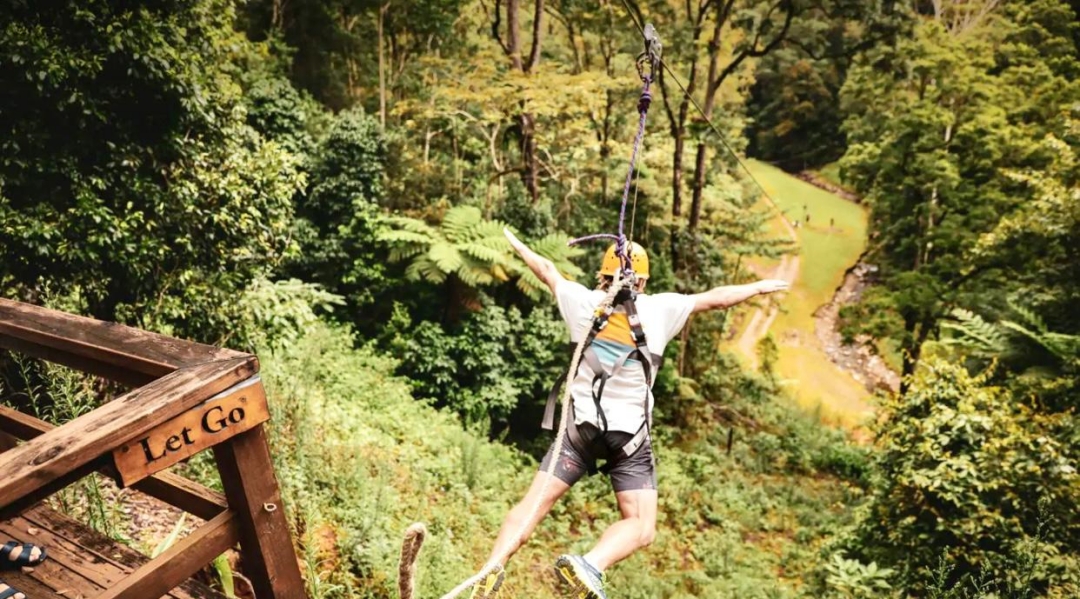 Burke says many cancer patients are asking for more time because they have been tricked into thinking that they have got no time.

“This is not true because no one can tell how much time they have left apart from the Creator.

“No one can do that.

“What’s in you, what’s already planted in you?

“Use your resources. That’s our beliefs,” she adds.