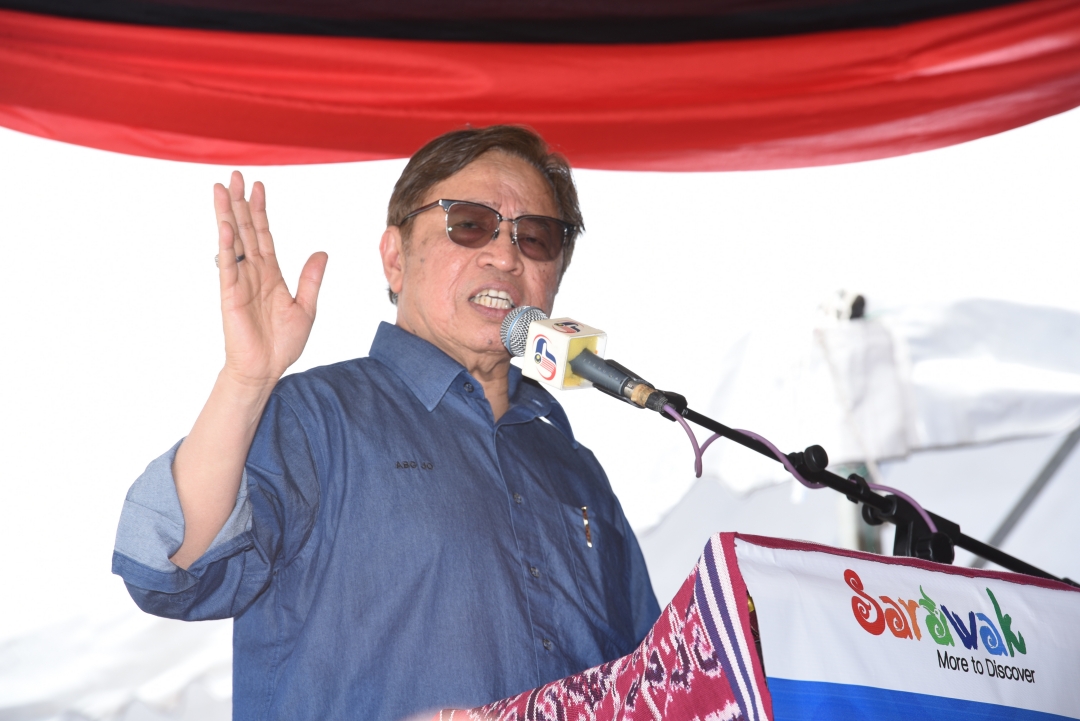 Abang Johari speaking during the launching ceremony of the 2022 Pesta Benak in Sri Aman on Sept 10, 2022. – Photo by Information Department

“Sri Aman is identified as the country’s paddy production area. This means we will develop the infrastructure which requires a lot of financial spending.

“Both will ‘ngubat’ (find solution) the development of paddy here,” he said.

On a related matter, Abang Johari said the Ministry of Modernisation of Agriculture and Regional Development (Manred) will have a new name soon in line with Sarawak’s change in approach for the agriculture sector.

“We will announce the new name of this ministry which will focus on the food industry. That is a different approach in agriculture development.

“I do not want the ministry’s image to be associated with ‘orang susah’ (poor people), of a farmer with his ‘cangkul’ (hoe) and hat like they are poor all the time.

“Actually agriculture is an important sector (by) using new methods including digital technology in food production. This will reflect a brighter future for us,” he said.

He also said new policies have been discussed and formulated by him and Dr Rundi, and would be announced soon once ‘all the infrastructure is ready to develop agriculture sector’.

Though Abang Johari did not mention the new name for Manred, Dr Rundi at a press conference in Kuching on Sept 7 had said that the ministry would be renamed to the Ministry of Food Industries, Commodities and Regional Development to reflect the new focus of the Ministry to go for commercialisation of agricultural produce.

Dr Rundi was also quoted as saying the name change, agreed recently by the State Cabinet, will take effect once an official announcement is made by the Premier.

On another matter, Abang Johari said the Second Batang Lupar Bridge project is still being implemented albeit with a slight delay to worker shortage.

“We will continue the project which will link Sri Aman to the trunk road to the coastal road and then directly to Betong. This will open up the areas to develop modern agriculture,” he said.

Though Abang Johari did not specify the project, it had been reported that the 870m-long bridge is currently under construction and cost around RM60 million.

He also pledged to allocate funds to further expand the recently completed Sri Aman Waterfront, which served as the venue for the Pesta Benak.

He said there were requests from the local elected representatives to extend the Waterfront to include a location to land the famous local fish Ikan Bulu caught at the Batang Lupar which flows through Sri Aman.

“I am still looking for more funds to increase development in Sri Aman which now has experienced changes. Insya Allah, we will continue the Waterfront project with the allocation which we will give to increase  the facilities including to land the fish,” he said.

The Sri Aman Waterfront project costing RM12 million was completed this year in time for the Pesta Benak which is held again after a two-year hiatus following the Covid-19 pandemic.