Saturday, October 1
You are at:Home»Features»A night of culinary extravaganza (Video) 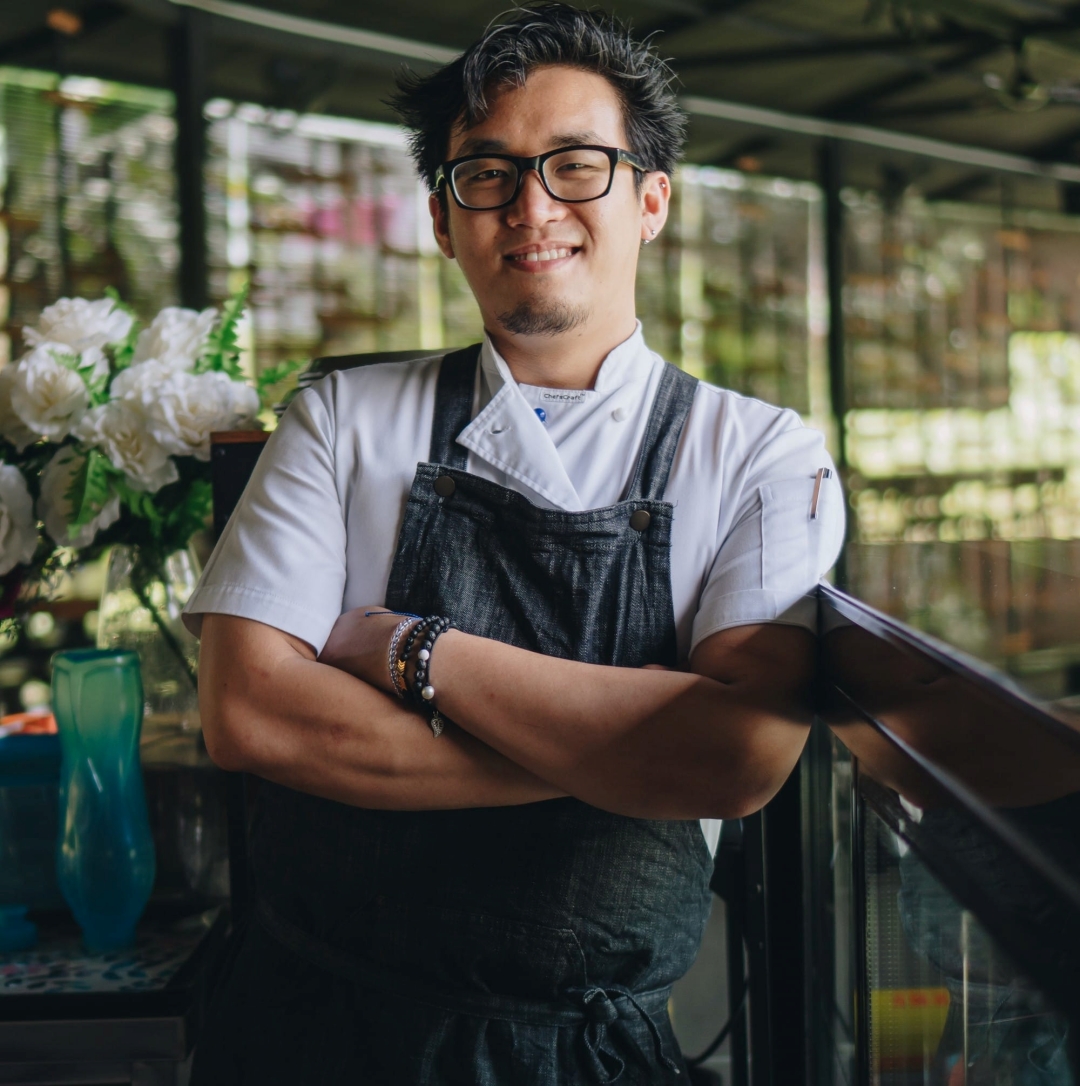 Chef Achang describes his current vocation as ‘a nomadic chef’.

WHEN it comes to art, the term covers a wide spectrum of categories, including food.

However, when the physical artworks such as paintings are translated into cuisines, the result can be quite a spectacle.

This was exhibited during the ‘Dine With Art’ showcase at La Promenade Mall near Kuching, which ran from Aug 19 to Sept 3.

Presented every Friday and Saturday throughout the period, this culinary extravaganza was coordinated by Chef Achang Libat.

These masterpieces are on display at Hoan Gallery’s opening art exhibit, themed ‘Rebirth’.
It is noteworthy to mention that as exquisite as the menu offered, the ‘Dine With Art’ showcase was also an exclusive, as well as a pricey, event.

The total number of guests per session was limited to 20, and the bill came at RM228 per head. 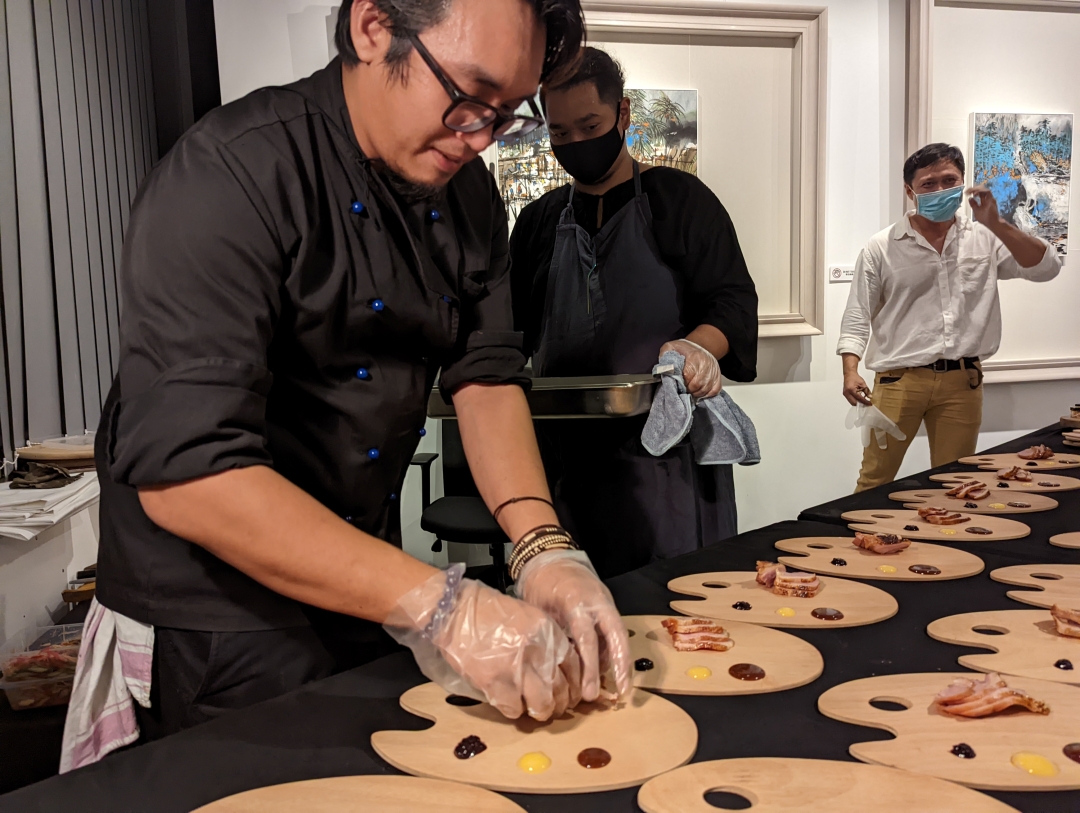 The concept for the six-course dinner was ‘omakase’, which meant ‘up to the owner’ – a vestige of a Japanese sushi restaurant culture in the early 1990s, where the patrons would ‘respectfully leave it to the owner to decide what would be best’.

Even more exciting for the ‘Dine With Art’ guests were the ‘hidden surprises’ in between the entrées, main dishes and desserts.

Every ingredient for all the dishes was thoroughly prepped and seasoned before the ‘assembly’, including those for the live show-cooking before the guests.

In line with the ‘omakase’ concept, the diners got to observe the process and preparations of the food ‘up close and personal’.

Chef Achang, the 31-year-old ‘scientist’ behind the culinary showcase, said the menu items represented his interpretation of the artworks at the gallery.

“The way I see food or basically the way I see most things, there’s always an artistic aspect to it.
“Prior to this process of interpreting the artworks, I sketched and drafted out my ideas to figure out the best ingredients and condiments for the dishes that I had in mind.

“At Hoan Gallery, there are numerous important art pieces that need to be shared and shown out there.

“It’s more like a challenge – how we’re going to interpret art in food where people would look at the food and instantly, they would know the artists and the kind of artwork that the food represented,” the Kayan-Lun Bawang chef told thesundaypost. 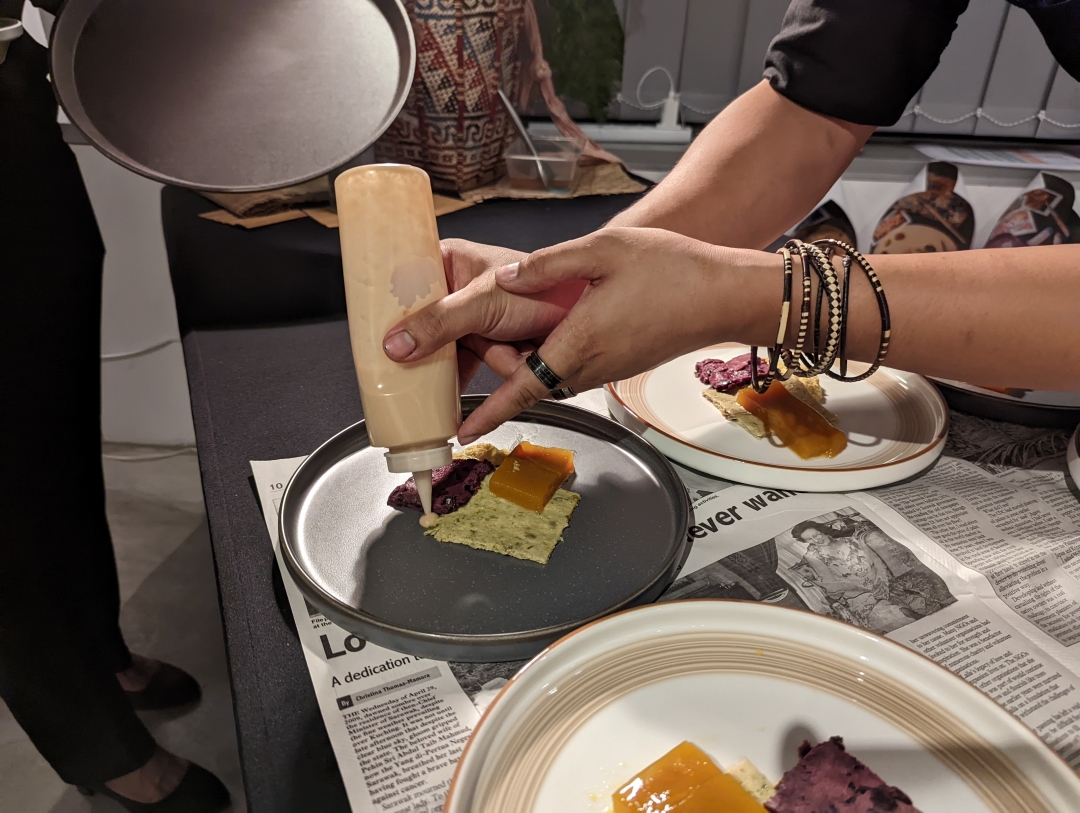 Every detail counts in the presentation of each dish served during the ‘Dine With Art’ showcase.

It took Chef Achang countless of hours to conduct research and studies on the subjects of his chosen arts, so as to curate the items for the six-course fine-dining event.

First on the entrée list was the ‘Jicama Fritter’, consisting of scorched eggplant purée, wild leaves, ferns and tapioca leaves purée, with an accompaniment of ‘terung asam’ (sour brinjals) vinaigrette and green oil.

This dish was inspired by Lee Hock Kia’s geometric-style artwork. 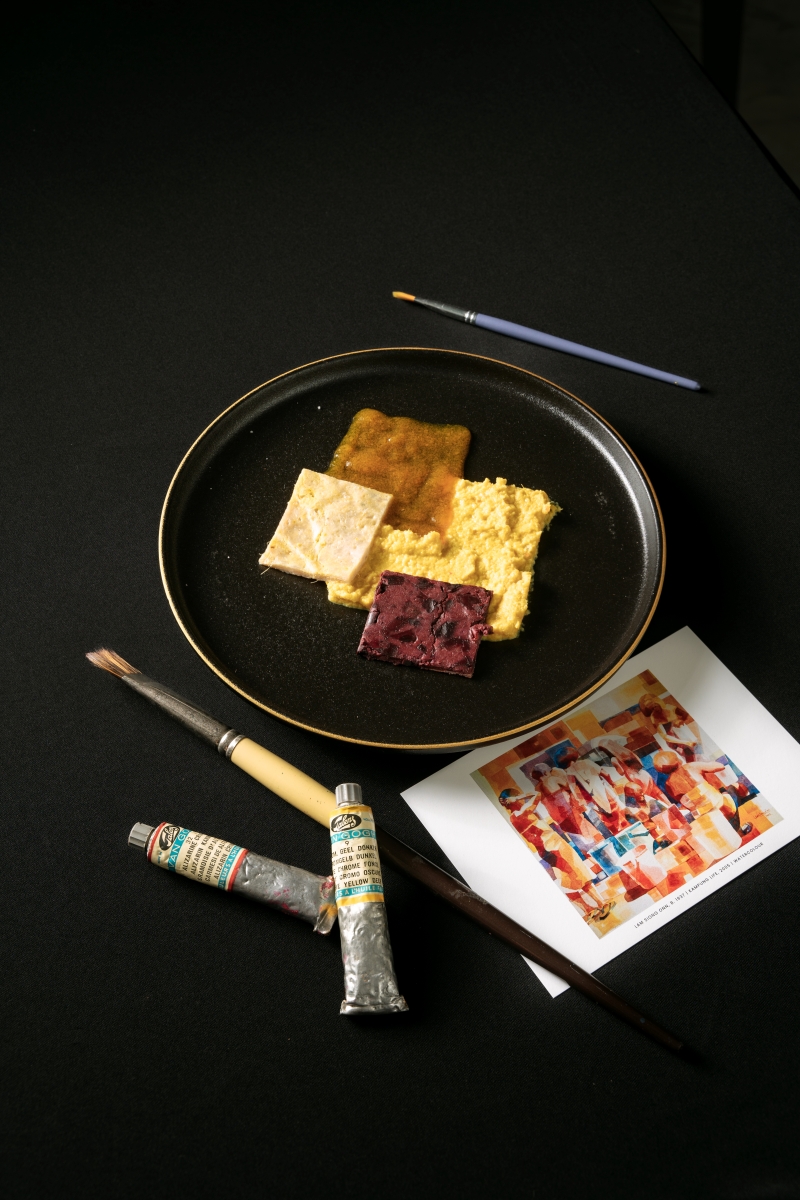 This was followed by a ‘tenggiri’ (local mackerel) platter that came together with ‘rebung masak lemak’ (bamboo shoots in coconut milk) purée, sour turmeric jelly and ‘dabai’ (local olive) sheet, topped with ‘beurre blanc’ (emulsified butter sauce, typically flavoured with an acidic element such as vinegar or white wine, as well as shallots).

It meant to translate the cubism concept depicted in Lam Siong Onn’s artwork. 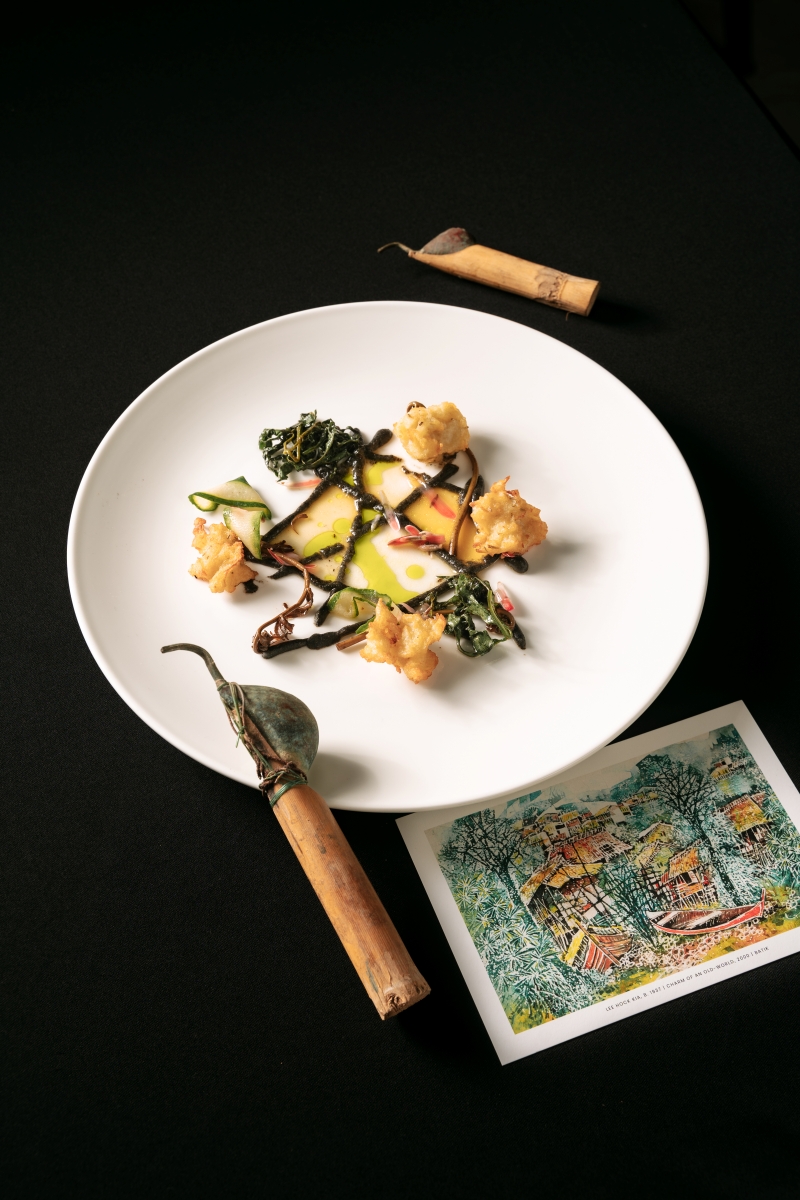 The ‘tenggiri’ platter represents a fusion of local ingredients and a Western element represented by the ‘beurre blanc’.

“This concept for this particular dish was heavily influenced by the late Michael Chong’s technique of ‘splat, splat, splat’ – in a literal sense fathomable by the live audience,” said the law-student-turned-chef. 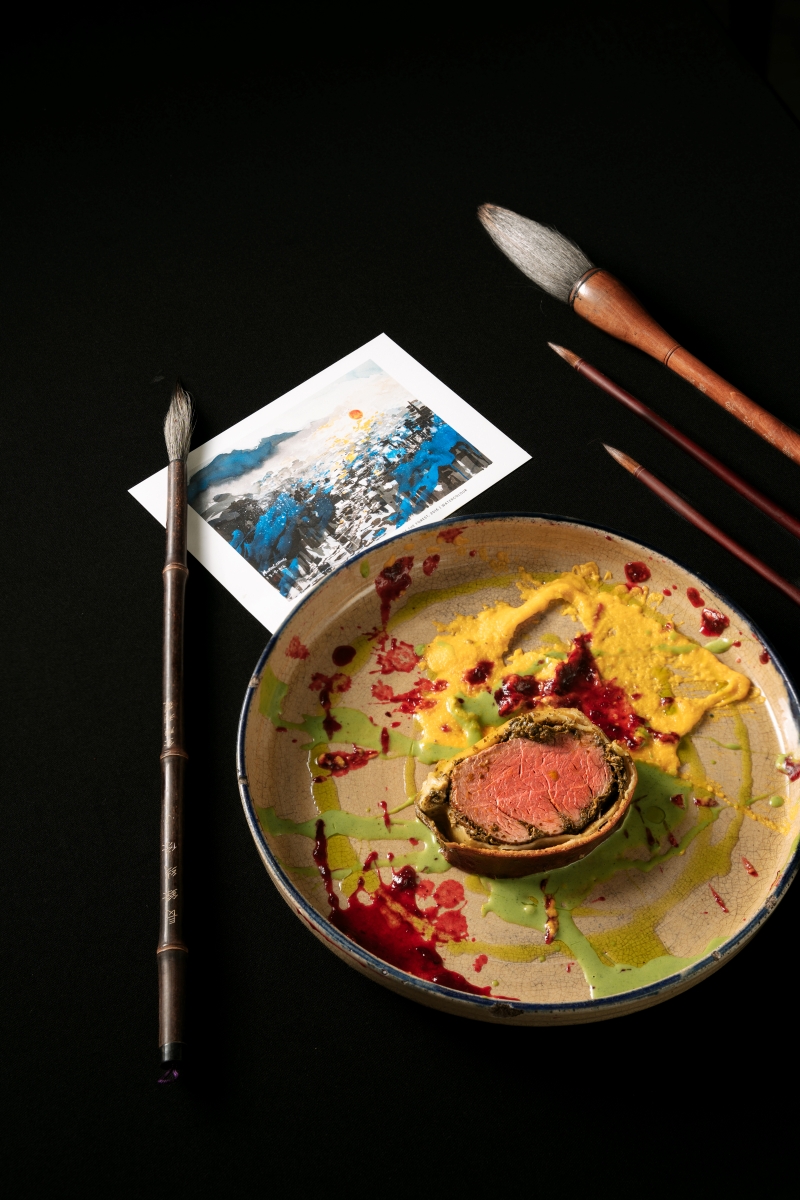 The ‘Beef Roulade’ is quite a fiery number, with the incorporation of ‘geronong’.

For this number, Chef Achang said it was inspired by the oil panting/canvas/realism styles of Hoan Kee Huang and Leonard Siaw.

As mentioned previously, the chef had sneaked in some surprise delights in between the courses, in the form of ‘items’ for the guests to ‘paint and eat’ the dishes. 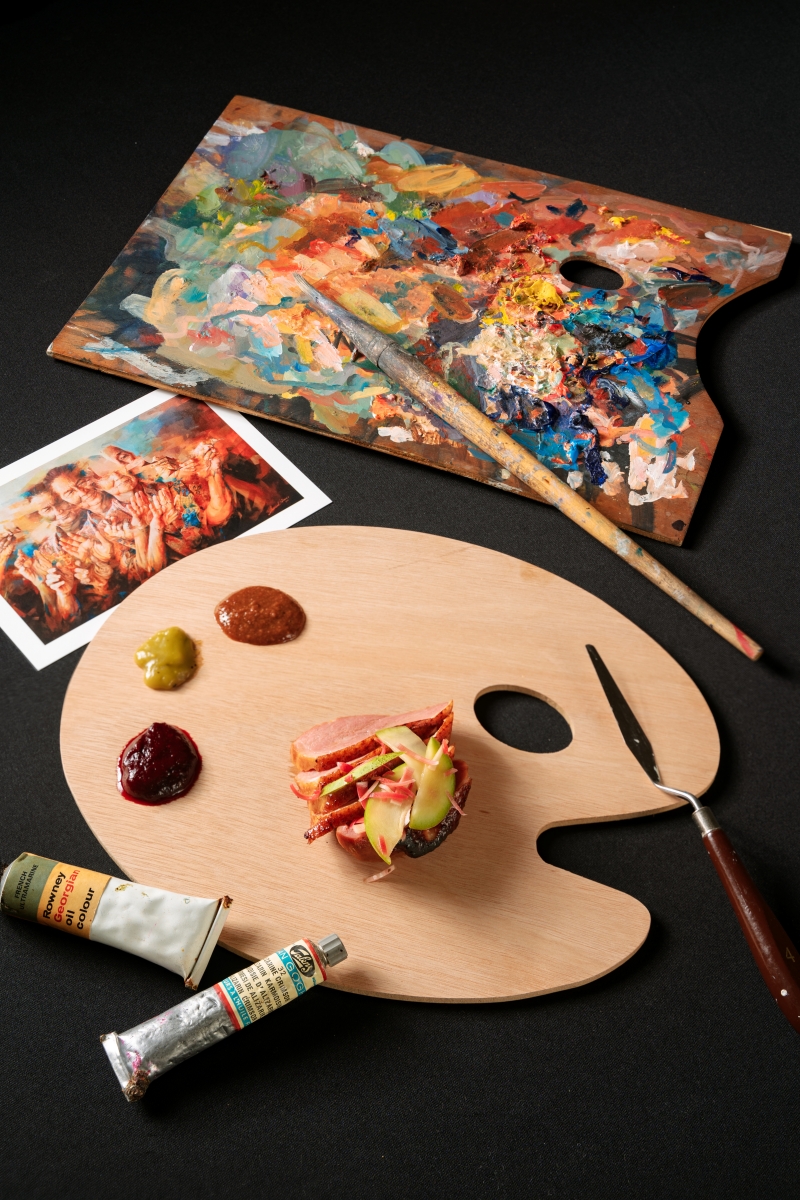 The ‘duck palette’ is inspired by the oil panting/canvas/realism styles of Hoan Kee Huang and Leonard Siaw.

Perhaps the most anticipated course of the night was the sweet treats, and in this area, Chef Achang definitely did not disappoint. 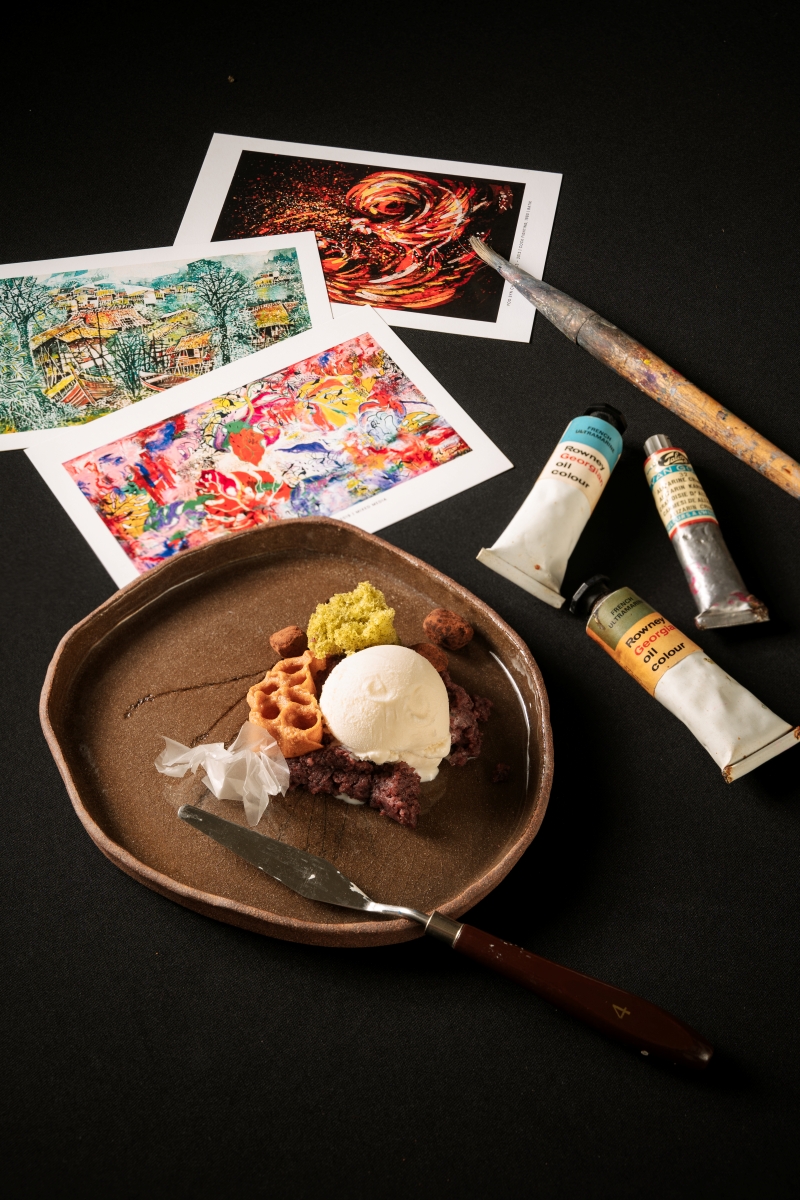 Finishing off the fine-dining sitting were ‘Kuih Batik’ and ‘Batik Pudding’, accompanied with sweet potato puree and local chocolate sauce.

Complementing the dishes throughout were wine, ‘tuak’ (local rice wine) as well as a number of non-alcoholic beverages such as ‘bunga kantan’-infused water, the flavoursome Sarawak Liberica coffee, and Dong Ding Oolong tea. 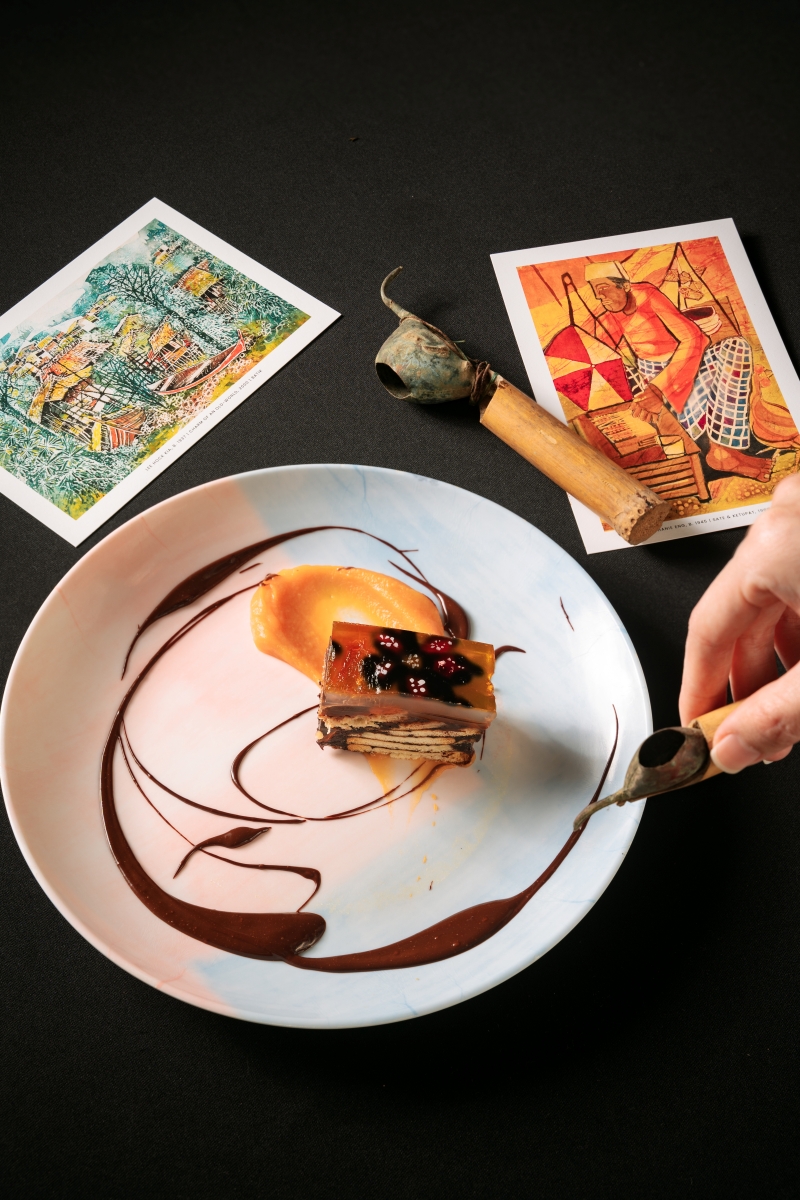 The ‘Kuih Batik’ and ‘Batik Pudding’, accompanied with sweet potato puree and local chocolate sauce, finishes off the fine-dining sitting.

Outlet for ‘artsy side’

For the chef, he regarded cooking as a medium for him to express his emotions and passion, as well as an outlet for him to exhibit his ‘artsy side’.

“I love it when the food goes to you and it plays with your mind, intrigues you; (it is) that moment when you go ‘wow’ upon having a new experience.

“I think that is why I cook, because I cook for you; that is a good way of saying it, and it makes me happy to say that,” he smiled.

Chef Achang also expressed his pride over Kuching being acknowledged as a ‘Creative City of Gastronomy’ under United Nations Educational, Scientific and Cultural Organization (Unesco).

In this respect, he would strive to be a part of the ongoing culinary revolution in Kuching.
“This is all a part of the plan by me and my team to elevate the dining experience in Sarawak, with the inclusion of local ingredients and produce,” said the chef.

The brain behind the menu

Photo shows the sketches done by Chef Achang, drafted to convey his interpretation of the artworks through each dish.

Chef Achang enjoys innovating and elevating local cuisines using ingredients that many do not think would work well in established dishes.

A former student of Taylor’s University where he obtained his Diploma in Hospitality, Tourism and Hotel (Culinary Arts Major) in 2013, he also holds a Diploma in Food and Beverage Services (Major in Patisserie) from Le Cordon Bleu Sydney, as well as a Certificate IV from the same institution.

His working experience covered tenures at the renowned Belgian chocolate franchise Guylian, and also Balcon by Tapavino, a Spanish Tapas restaurant, both in Australia.

He describes his current vocation as ‘a nomadic chef’, but in actuality, he is the owner/head chef of Gypsy Badger Kuching.

Hailing from Kuching, Chef Achang did his first commercial culinary installation in 2018 at HAUS Kuching called ‘Reimagine’, dubbed as ‘an exploration of local and traditional flavours, using unconventional methods’.

He then conducted another installation, ‘Plating the Wild’ at the Rainforest Fringe Festival 2019.

Chef Achang was part of the Sarawak entourage at the Ambiente, a globally-renowned consumer goods festival that took place in Messe Frankfurt, Germany in February 2020.

So far, it has been ‘a wonderfully busy year’ for the chef.

Prior to ‘Dine With Art’, Chef Achang staged the highly-successful ‘Dine On Clay’ dinner series with Gardencraft.co, serving up food on the works of local clay-makers and potters.

It was a sold-out event, with a spin-off ‘Staff Meal Edition’ lunch series launched to accommodate high demands.

He was also the consultant chef for Sago Incubator 2022.

Launched in May this year, the 11-week incubator programme focused on aspiring ‘foodpreneurs’ all set to grow their ventures. It was jointly run by The Hills Kuching, WAT Sarawak and Retrospective Discovery.