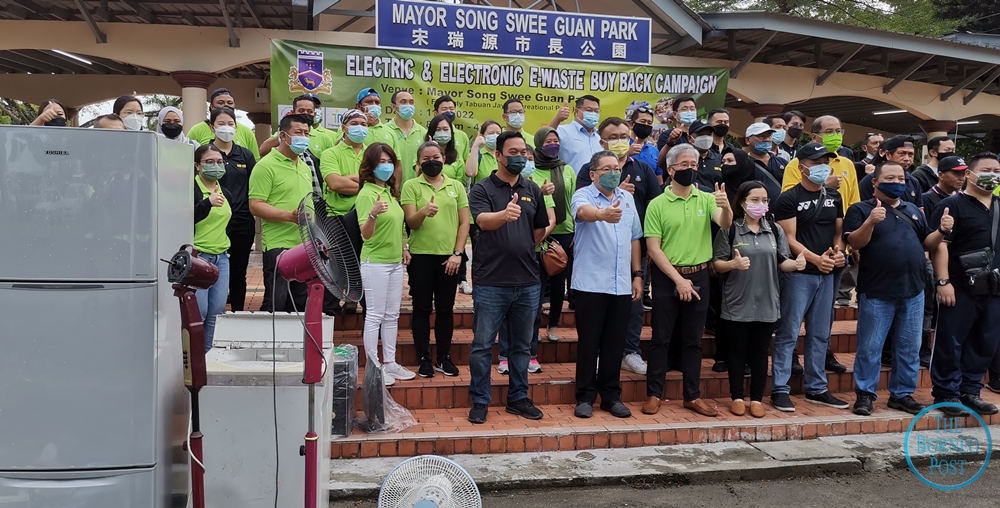 Wee (sixth right, front row) with others give their thumbs-up for the MBKS BEE campaign.

The Kuching South Mayor said everyone should shoulder the responsibility to protect the planet and not creating waste including e-waste should help.

“We should try not to create waste to protect this planet as this is where we stay, and it belongs to everyone.

“Instead of enjoying technology, do your bid to protect the planet. Also, Kuching is our city, so everyone has a role to play,” he said when met by reporters after launching the MBKS Electrical and Electronic Waste Collection (BEE) campaign at the Mayor Song Swee Guan Park in Tabuan Jaya here today.

Wee said the campaign served as an awareness to the community to play their role in protecting the planet.

As such, he said the council will organise the campaign on a weekly basis in various areas. Today, similar campaign also took place in Hui Sing Garden here.

In his speech earlier, Wee said e-waste management is a concern not only because of the tremendous increase in its quantity but it had also grown in increasing complexity.

According to him, e-waste contains a lot of toxic ingredients such as lead, beryllium, mercury, cadmium and brominated flame retardants.

“These are highly hazardous substances which may pose both occupational and environmental health threats. E-waste can also be another source of raw material if it can be effectively recovered through environmentally sound manner,” he said.

He said recycling of e-waste also contributed to the reduction of greenhouse gases because significantly less energy was used when compared with the primary mining.

Wee pointed out that there is a need to develop schemes on the collection and segregation of e-waste including take-back schemes, the initiation of pilot repair, refurbishment and recycling schemes.

He was glad that the Natural Resources and Environment Board (NREB), Department of Environment (DoE) and local authorities such as MBKS had been working together to implement the BEE campaign in Sarawak.

“Such programmes are to encourage the public to dispose of e-waste at home and motivate the community to be involved in waste recycling programmes.”

To better address various environmental issues, he said the community must ensure that recycling efforts had been carried out at their homes, work places and their surroundings.

He thus urged the private sector, community associations, non-governmental organisations and all city dwellers to seize this opportunity to promote urgent and lasting action.

“The world cannot wait another 10 or 20 years in theoretical debates and political negotiations. Whenever else divides us, humanity shares a single planet.

“Let us work together to truly make Kuching ‘Green’ with an ecological footprint that is sustainable for all our future generations to come,” Wee added.

The BEE campaign was a joint effort of MBKS, NREB, DoE and Trienekens (Sarawak) Sdn Bhd.