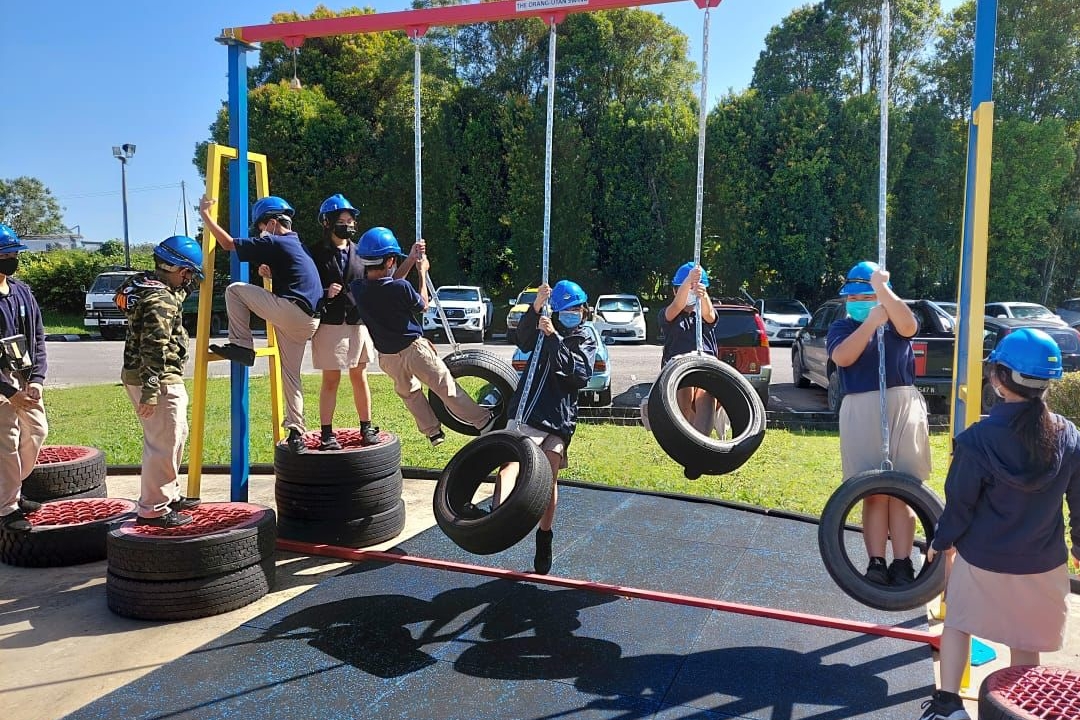 WHEN, in 1876, Henry Wickham smuggled thousands of Amazonian rubber tree seeds (Hevea brasiliensis) to Kew Gardens, in the UK, where they were developed into saplings, little did he realise that these plants would be despatched to Singapore, Malaya, India, Sri Lanka, and Indonesia. Malaya was to become the world’s largest producer of latex through the sustained efforts of Sir Henry Ridley, the first Scientific Director of the Singapore Botanic Gardens from 1888 to 1911.

Today, Malaysia ranks sixth or seventh in the world’s production of latex. Not once did these two men stop and ask themselves what happens to discarded or used latex products?

Discarded rubber tyres become a living nightmare to dispose of and are often dumped in the countryside or in streets and even used as plant potholders, decorated with a dash of paint! In a tropical climate the latter become collectors of rainwater and are thus potential mosquito breeding grounds.

They do have a disused value and more importantly a new value when treated or ‘upcycled’. In 2013 a company, ZHA (Zen Hak Ann), was appointed contractor by the Sarawak government to upcycle tyres. To date, they have reprocessed nearly nine million tyres, a phenomenal number, at their Batu Kawa-Matang factory!

I first came across the term ‘upcycling’ in an introductory talk given by ZHA director Bernard Jong to a group of school students and their teachers at his factory site. This word fascinated me, for I was already acquainted with the three ‘R’s’ – Reduce, Recycle and Reuse – all aiming to cut down the amount of waste going into landfills, as well as conserving natural resources and reducing pollution, but never ‘upcycling’.

To my amazement, I discovered that it was a term first coined 28 years ago and is defined as, “the refurbishment or repurposing of a material with the object of creating something of higher quality or value”.

Giving used or unwanted materials a second life reduces waste. Upcycling disused rubber tyres certainly reduces CO2 emissions by extending the lifespan of this material as well as reducing the need for production of new or raw materials, thus decreasing the amount of air pollution and greenhouse gases.

It was only a few years ago that a used tyre collection depot caught ablaze in Kuching, producing black clouds of toxic smoke forcing local residents to shut their windows and sweeping up and washing down the burnt particulates that had fallen onto their gardens and properties. Bomba firefighters were faced with many hours of exhausting work before the fire was eventually extinguished. The water used, together with the later rain, found its way into drains, thus creating further pollution. 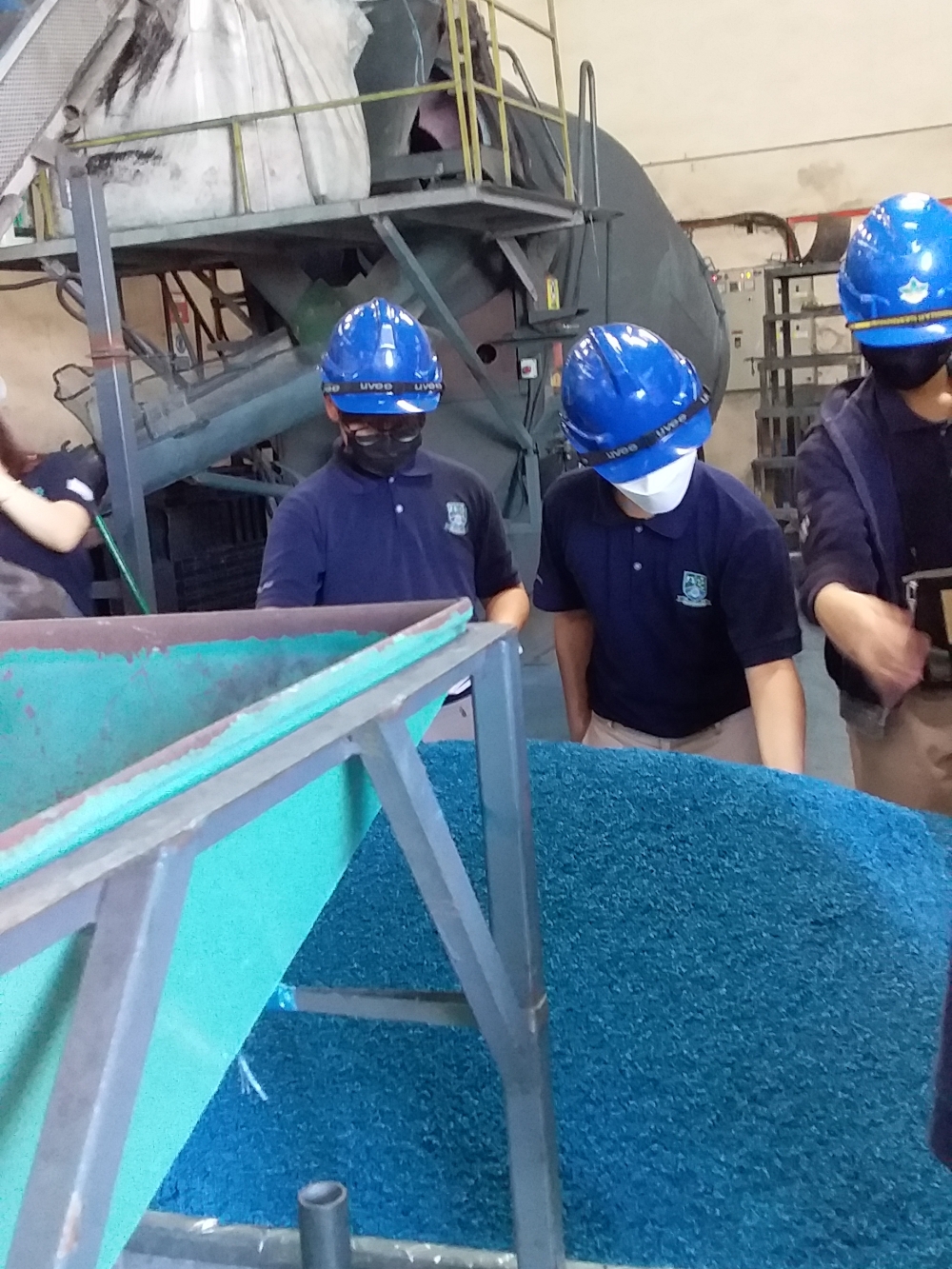 Photo shows students with granules of rubber after shredding and colouring.

A visit to the local ZHA factory — with the others being in Australia, Dubai, and India – was an experience Borneo International School Year 7 students will certainly remember. It was the first factory site that most had visited and an eco-friendly one at that!

Each wearing hard hats, they were conducted in small groups by excellent and knowledgeable guides to see lorry loads of tyres delivered to the very end products which they enjoyed playing on. The discarded tyres were taken to a shredder mill where steel coils were stripped from the tyres for further sales as scrap.

The shredder mills were operated by mechanical cutters and the products to be processed into rubber powder, pressed into sheets, mats, and tiles with colouring additives. Piles of multi-coloured sheets were seen on stacking shelves ready for further processing and use as gym mats and playground surfaces taking and absorbing accidental falls from children on swings, roundabouts, and climbing frames, as well as providing underlay for Astro athletic tracks and infill for artificial turf football and hockey pitches.

The children were taken to the factory playground where they could test the absorbency of the products for themselves. The multitude of uses of the upcycled products was unimaginable and beggared belief that a car tyre could be so transformed.

The ‘pièce de resistance’ of the school’s director and myself was being asked in front of the students to sculpture the shape of an upcycled rubber sape set in a mould. With aplomb, we did our best with a trowel to produce a realistic copy but without the strings attached!

Undoubtedly, upcycling reduces the amount of material ending up in landfills, which can take hundreds and even thousands of years to decompose. As importantly, it minimises the use of natural resources and raw materials, thus leaving a smaller carbon footprint. It reduces the strain on valuable resources such as fuel, forests and their products, and water supplies. Money is saved and indeed generated by turning old materials into new items.

We are still fortunate in Malaysia in our arboreal production of latex where our plantation trees absorb a certain percentage of the ever-growing carbon dioxide content of our atmosphere in their growth and contribute a substantial amount to our economy.

Whilst we are one of the top 10 of the world’s largest producers of latex and a manufacturer of tyres, we need to pause and think about where our end products, after their expiry dates, end up. Upcycling is an answer to this problem, thanks to ZHA.

Twice weekly collections of our home waste take place in our cities in both Sabah and Sarawak but are we encouraged to sort out what we deposit in our one bin? Our so-called ‘rubbish’ is no doubt sorted out in the collector’s depot to be incinerated or end up in a landfill.

Here, in the UK, I have a big black bin for household rubbish that cannot be recycled; a big green bin for garden refuse that can be converted into compost; a black box for paper and cardboard; a green box for glass bottles; a blue foldable bag for plastics and tins; and yet another brown container for discarded food.

It takes me a good half hour to sort out my household rubbish, but it is a task that is worthwhile for, apart from the black bin, all is off to recycling and even upcycling sites … to the best of my knowledge!

‘One’s never too old to learn’

I was truly educated during my visit to the ZHA factory and my eyes were opened as to how upcycling creates a circular economy when discarded products are reused rather than tossed away as useless waste. There, rubber tyres, single-use items, are transformed into new products without massive energy inputs or indeed environmental pollution.

For such a circular economy to be totally effective, manufacturers need to consider how their final products can be upcycled a year or so later, or in the case of car tyres after travelling over 70,000 to 80,000km or the equivalent of five years’ continuous wear. The creation of this factory in Sarawak is a huge feather in the cap of the Sarawak government’s transactions to create a green economy.