Wednesday, October 5
You are at:Home»Business»BizHive»Why Japan is our top pick over US and European equities

JAPANESE equities remain supported by the Bank of Japan’s (BOJ) accommodative stance, while the aggressive policy stance in western DMs will act as a headwind for the region’s equities.

Unlike western developed markets (DMs), Japan has yet to fully re-open. We expect an uplift in its economy when the re-opening gains traction, likely in late-2022 and 2023. This will be significant at a time when growth in DM peers are cooling.

Despite a challenging year thus far, the outlook for Japanese equities has improved given the emergence of several catalysts in 3Q and we now expect a stronger upsidepotential. In this short update, we will outline the reasons why Japan is our top equity pick amongst DMs: 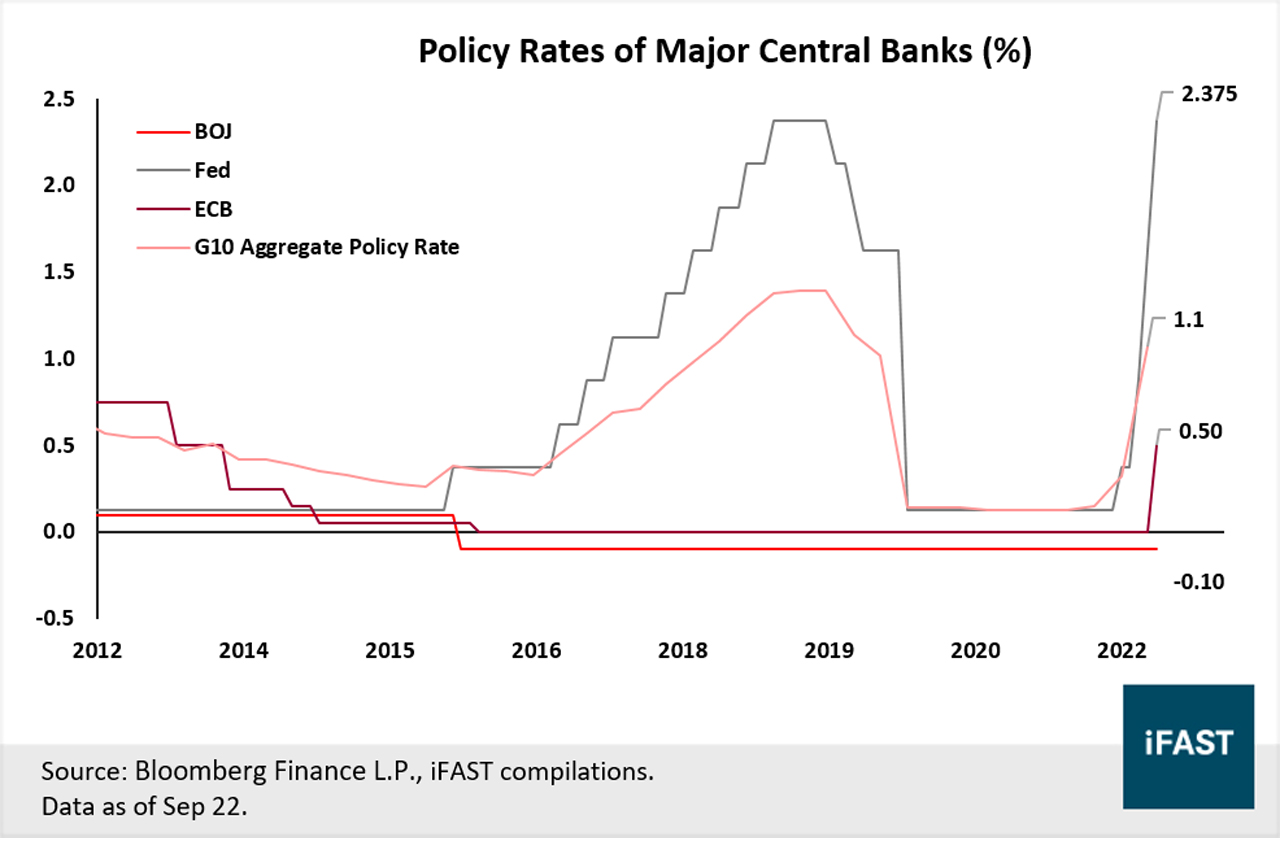 The Bank of Japan (BoJ) has continued to adopt an accommodative monetary policy stance, which is not only supportive of Japanese equities but also for the region’s macro health.

In contrast, the US Federal Reserve and European Central Bank have remained steadfast on an aggressive tightening stance, which after months of relentless rate hikes, has notably cooled their growth momentum.

Looking ahead, it is likely that the BoJ will stick to its dovish stance given tolerable inflation readings. Headline inflation for Japan was 2.6 per cent year-on-year (as of July 2022), which is much lower than the elevated level seen in the US (8.5 per cent) and Euro-area (8.6 per cent) in the same period.

Inflation in Japan also remains within the BOJ’s target of around two per cent, bolstering the case for an accommodative stance.

Crucially, wages have not picked up significantly. During this year’s “shunto” negotiations, during which the management of Japan’s blue-chip firms meet with unions for wage talks across industries that set the tone for employees’ pay in the new fiscal year, big firms gave full-time employees rises of just 2.3 per cent, barely more than last year’s 1.8 per cent, and well below the government’s target of three per cent. This is in stark contrast to the US, where average hourly earnings have increased by 5.2 per cent in August.

Broadly, we expect BOJ’s accommodative stance to continue unless inflation data surprises to the upside and greatly exceeds the central bank’s forecast for a sustained period.

While the aggressive policy stance in western DMs will act as a headwind for the region’s equities, Japanese equities will find support from BOJ’s accommodative stance. 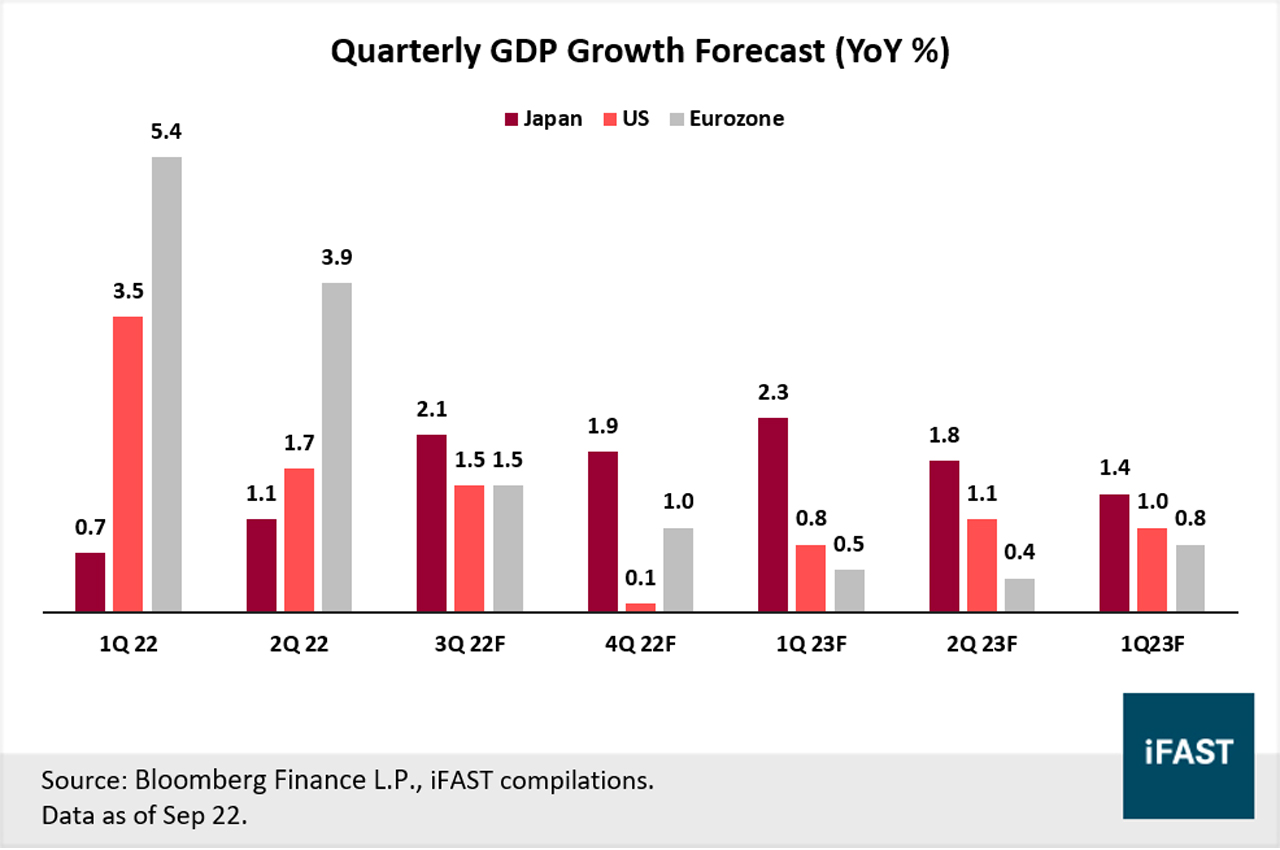 Secondly, Japanese companies are also relatively successful in passing costs to consumers. In recent months, Japan’s CPI has picked up sharply, outgrowing the PPI, which implies that consumer prices are rising as a result of higher output prices by companies.

Furthermore, the still-robust sales growth of these companies suggests that consumers have so far been able to absorb the price increases. 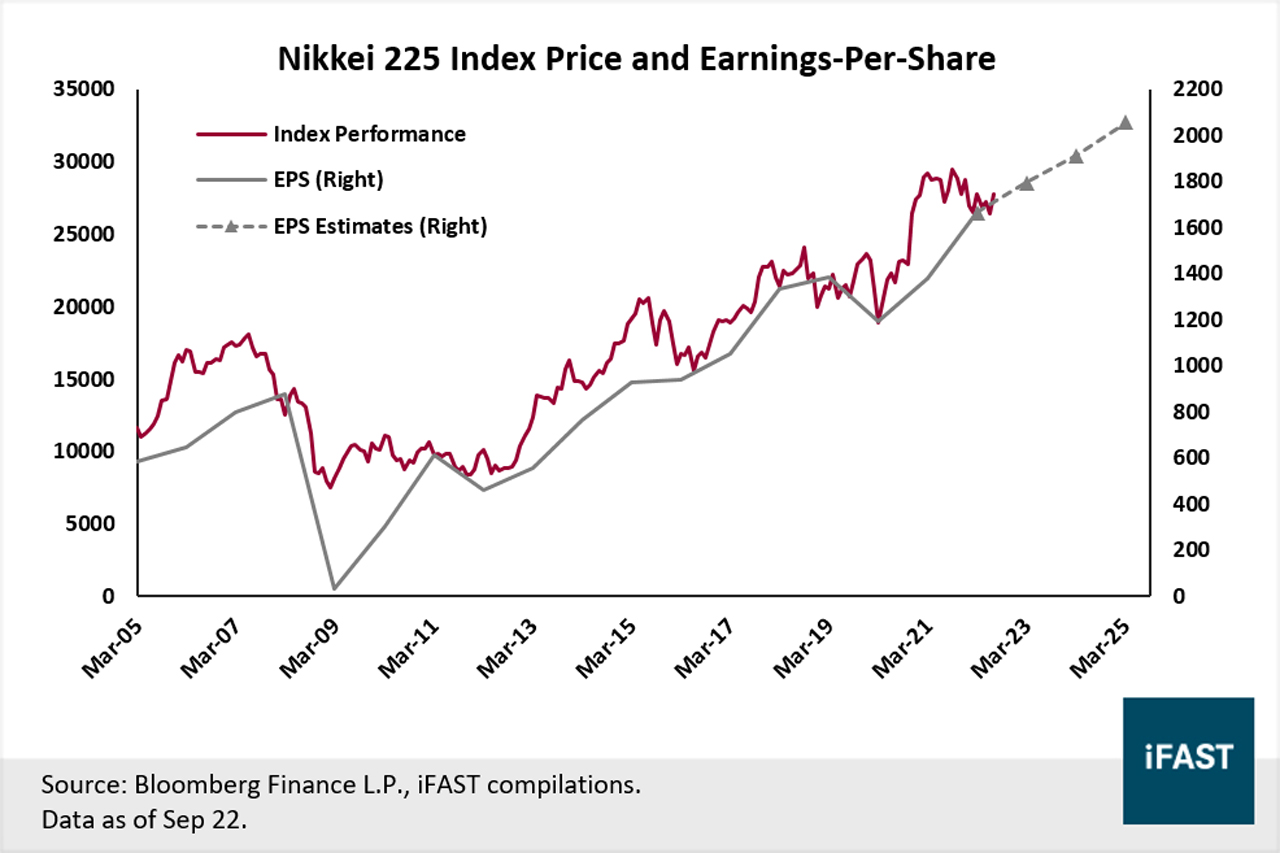 While most western developed markets have re-opened in late 2021 (and almost fully reopened this year), Japan has only partially re-opened. This suggests that most of the western DMs have already enjoyed a positive lift in growth, which has been reflected in their macro data over the past six to nine months.

Japan, on the other hand, has yet to enjoy such a boost in growth.

We expect an uplift in Japan’s economy when the re-opening gains traction, likely in late-2022 and 2023. At a time when growth in DM peers are cooling, this is a timely spur in Japan’s economic momentum. We see a rosier macro outlook for Japan relative to US and Europe, and this is in line with consensus GDP forecasts.

Why Japan is our top equity pick over US and Europe

For the above reasons, we prefer Japanese equities within developed markets. From a portfolio construction perspective, we recommend allocating greater exposure to Japanese equities relative to US and European equities.

From a product strategy perspective, we recommend an unhedged approach to Japanese equities, maintaining exposure to the yen.