Tuesday, February 7
You are at:Home»Columns»Exploring Sustainable Development»Cleaning up horse dung: Innovation beyond technology
For the freshest news, join The Borneo Post's Telegram Channel and The Borneo Post on Newswav. 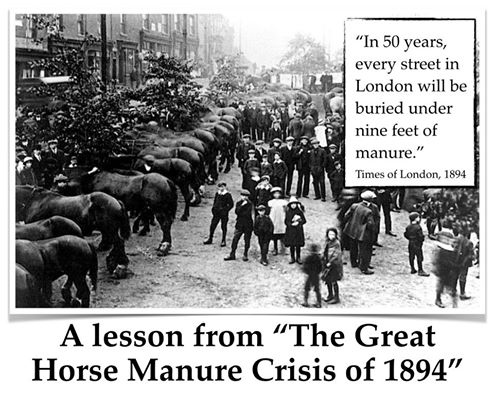 The Times in 1894 predicted that “in 50 years, every street in London will be buried under nine feet of manure”. – Photo credit: stephenliddell.co.uk

I recently found an exciting story in one of my son’s books. It goes like this:

In the late nineteenth century, many large cities relied heavily on horses for transportation. The horses generated enormous faeces on the streets every day, exposing the residents to foul smells and increasing the risk of infection and disease transmission.

The problem came to a breaking point in 1894. It was claimed that The Times even predicted that “in 50 years, every street in London will be buried under nine feet of manure”.

It seemed like there was no way out until Henry Ford created the world’s first assembly line. With the mass production of motorcars, the number of horse-drawn carriages quickly diminished. In a decade, the horse manure crisis that seemed insurmountable was resolved.

The message of this little story is so powerful and memorable. Not surprisingly, a quick search on Google showed how widely authors, media, and lobbyists used this story as an analogy to encourage innovations.

However, some were curious enough to dig deeper before quoting it. The Times editor, Rose Wild, in her article in 2018, ‘We were buried in fake news as long ago as 1894’, admitted that she couldn’t locate any references in the archive for the abovementioned quote when requested by a reader.

As early as 2013, journalist Brandon Keim wrote in Nautilus, claiming that “the late 19th and early 20th centuries was the age of streetcars (trams run with electricity)” and “only a handful of wealthy drivers actually thought of cars as personal transportation”.

A writer on Medium.com, Marco Treven, also concluded that the story was largely fabricated. Evidence was found for the case of New York, which suffered a similar horse manure crisis like London at that time. According to the book by two historians, ‘Gotham: A History of New York City to 1898’, the solution to the horse manure crisis was not the proliferation of motorcars but radical reform of the city’s sanitation system. With strict military-like rules and salary adjustments, the horse manure crisis was effectively overcome by immigrant workers and their shovels.

This (fake) story has practical implications for the climate crisis we face. It is not uncommon to hear sayings like ‘those smart fellows will come up with new technologies, and everything will be fine!’, ‘the problem will solve itself’, ‘there’s nothing much we can do, so why bother?’

Such linear thinking could be dangerous to our efforts in fighting climate change and moving towards sustainable development. It prevents us from seeing problems holistically and undermines our ability to cope with them. Well, staying in our comfort zone is always easier than challenging the status quo.

When talking about the climate crisis, we often hear words like solar, wind, alternative energy sources, and even carbon capture and storage that ordinary people do not easily understand. The focus has been primarily on how new technologies can overcome the climate crisis while maintaining our current lifestyles.

Indeed, technological breakthroughs are crucial. However, isn’t it too risky for us to put all hope on technologies, assuming that the climate crisis is just another horse manure crisis waiting to solve itself? In fact, the current progress of renewable energy deployment around the world has not yet given us enough confidence that we can effectively limit temperature rises to 1.5 degrees Celsius above pre-industrial levels.

Innovation is beyond technologies. It represents ideas and solutions that diverge from the status quo. It does not necessarily require the most advanced technologies but new applications and combinations of what we have.

Numerous studies have clearly shown that system design and management innovations can significantly reduce emissions. Examples are increasing the use of public transportation, reducing food and material wastage, increasing recycling and reuse rates, improving waste disposal and handling, etc. Yet these proven solutions do not seem to work well in our country. Why?

There might be two reasons. First, a critical difference between these options with technological breakthroughs is that the focus is on cost reduction rather than wealth creation. Or simply put, they are not sexy enough to gain attention.

Even in the face of the climate crisis, the world still largely sticks to the idea of ​​measuring progress in terms of economic growth. Generating new wealth from climate technologies remains the central theme, with policymakers frequently making exciting claims about jobs and income creation.

Second, these options require people to change their behaviours. Everyone – including you and I – are involved, as our daily practices may have to change. Politicians and decision-makers likely shy away from options like these, considering the potential resistance from people and associated political risks.

Can we completely phase out the use of plastic bags by adopting innovative packaging? Can we be more cautious with our food consumption, innovatively optimising the distribution systems? Can we recycle or reuse more of our old items with innovative waste management? Can these be accelerated with behavioural changes? Do we need to make substantial changes, or a slight twist will do? What interventions can be innovatively implemented by the governments to drive these changes? We may have to continuously ask questions like these and seek innovative ways to make things happen.

The urgency of the climate crisis gives us little time. Underestimating the risks can catch us off guard and lead to catastrophic consequences. We may need to take a step back to relook at the problem and see if we actually miss out on any options.

Ignoring the immediately available solutions is like putting the cart before the horse. Let’s bite the bullet and do what’s needed – pick up the shovels and clean up the mess.

Dr Goh Chun Sheng is a researcher at Sunway University and Harvard University. His research interests lie in the intersection of bio-economy development and environmental restoration, with a special focus on both Malaysian and Indonesian Borneo.