Saturday, December 3
You are at:Home»Advertorial»FIM2022 a one-stop centre for local, global franchise community 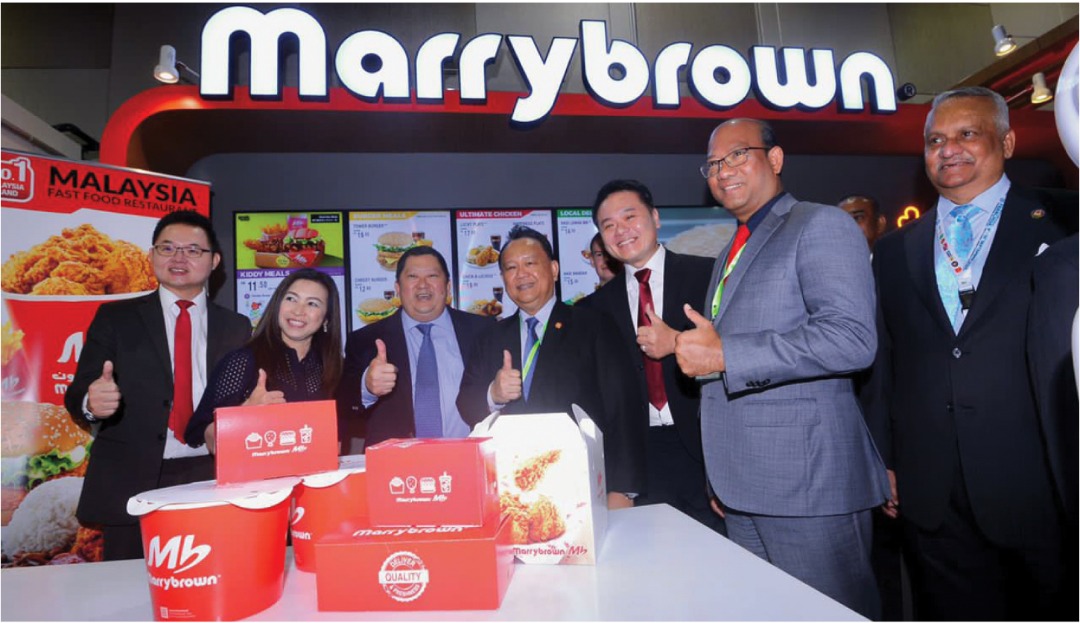 Nanta (centre), Azman (second right) and Radzali (right) with the Marrybrown franchisor in a group photo after the launch of the FIM2022 at KLCC.

Launched on Sept 8 at Kuala Lumpur Convention Centre (KLCC), the three-day event was organised in collaboration with the Ministry of Domestic Trade and Consumer Affairs (MTDCA) and Malaysian Franchise Association (MFA).

Hailed as the largest franchise exhibition and conference in Southeast Asia, FIM2022 targeted a total of 14,000 visitors and an expected potential franchise investment of RM450 million throughout the three days. It involved nearly 100 local and international franchise brands from nine countries: the United States of America, Australia, Indonesia, Italy, Japan, South Korea, Singapore, Taiwan and Malaysia itself.

Moreover, it featured 25 distinguished speakers comprising industry activists and professionals from abroad and within the country. Among the essential points of this year’s conference included the basic terminology of franchise business, the expansion of business to the international market, franchise legislation, sharing of business strengthening strategies, as well as strategies in addressing the current economic challenges.

In his remarks, Prime Minister of Malaysia Datuk Seri Ismail Sabri Yaakob described FIM2022 as “the best platform to explore various franchise business opportunities and to obtain various information about franchising including assistance and incentives from the government, support services, development activities, as well as training programmes available in the franchise industry.”

“In addition, it is also a platform for local franchise companies to promote their respective businesses through franchise packages as well as create opportunities to transform conventional businesses into franchise concepts,” he said in his speech for FIM2022’s opening ceremony at KLCC, on Sept 8.

The franchise ecosystem is very dynamic and is exposed to changes in the economy and global social landscape such as the changes in foreign currencies, price competition, legislation and others.

In line with the FIM2022 theme, our country has conducted various initiatives to improve local franchising to ensure the sustainability and stability of the business during the Covid-19 pandemic and also inflation that is happening in all countries.

“The efforts have involved support from all parties, including the public and private sectors, as well as those having interests through the strategies that have been set by the government,” said Ismail Sabri.

In ensuring the government’s ambition that the country¡¦s franchise industry would continue to grow and become one of the contributors to the economy in the future, MTDCA had increased the efforts to implement programmes focusing franchise development both domestically and globally, added the Prime Minister.

“Many efforts have been taken by the ministry to introduce more new approaches in promoting franchise business, along with improving the mechanism of the existing implementation programmes, so they are in line with the increasingly-challenging business environment and the needs of the new norm,” he said.

The Prime Minister’s speech was read by the Minister of Domestic Trade and Consumer Affairs Dato Sri Alexander Nanta Linggi.

According to the Radzali, FIM is the only exhibition and the largest franchise conference in Southeast Asia with its 28-year organising record.

“The franchise exhibition and conference play an important role as a platform and model for franchise industry players and future franchise entrepreneurs from the country and abroad to gather and to create an intellectual space and active and proactive discussion sessions in building franchise business networking.”

Radzali also pointed out FIM as ‘the best platform for the community to explore job opportunities through franchising and further improve their lives’.

The organisers had expressed hope that the exhibition and conference could benefit visitors and help them conduct business in a more relevant, future-proof, and sustainable manner.

Visitors got to take part in various activities prepared, as well as the opportunity to obtain information on franchise business offered by local and international franchise operators.

Meanwhile at the same event, Malaysia’s largest franchise fast food chain and also the largest the largest homegrown Halal Quick Service Restaurant (QSR), Marrybrown, hadsigned a memorandum of understanding (MoU) with CB Connect Pty Ltd for the opening of a minimum of 30 Marrybrown restaurants in Australia.

Marrybrown’s partnership with entrepreneur and owner of CB Connect, Kevin Chi who has 30 years of experience in the food and beverages (F&B) industry with 10 well-known F&B brands in Victoria, Australia, was reflected in the agreement meant to facilitate Marrybrown expanding its footprint by bringing its much-loved halal meals to the customers in Australia.

Marrybrown would see its first outlet opening in Melbourne this December 2022, serving customers across Australia with a delicious halal menu that the brand is well-known for such as Crispy Chicken, Nasi Lemak MB, its range of delicious burgers, specialty wraps, fun fries, a range of hot and cold beverages, as well as desserts.

Marrybrown founder Datin Nancy Liew said they were confident that the Australian market would be a great opportunity of growth for Marrybrown, making it a strategic move in line with the company’s international expansion plan.

“We are truly pleased to be able to work alongside CB Connect in this expansion as their wealth of experience coupled with the knowledge of local insights are what we need to expand Marrybrown’s presence in the Australian market,” she said.