Saturday, December 3
You are at:Home»Lite Stories»Reviving the tradition of ‘ngoca’ fishing with one’s bare hands 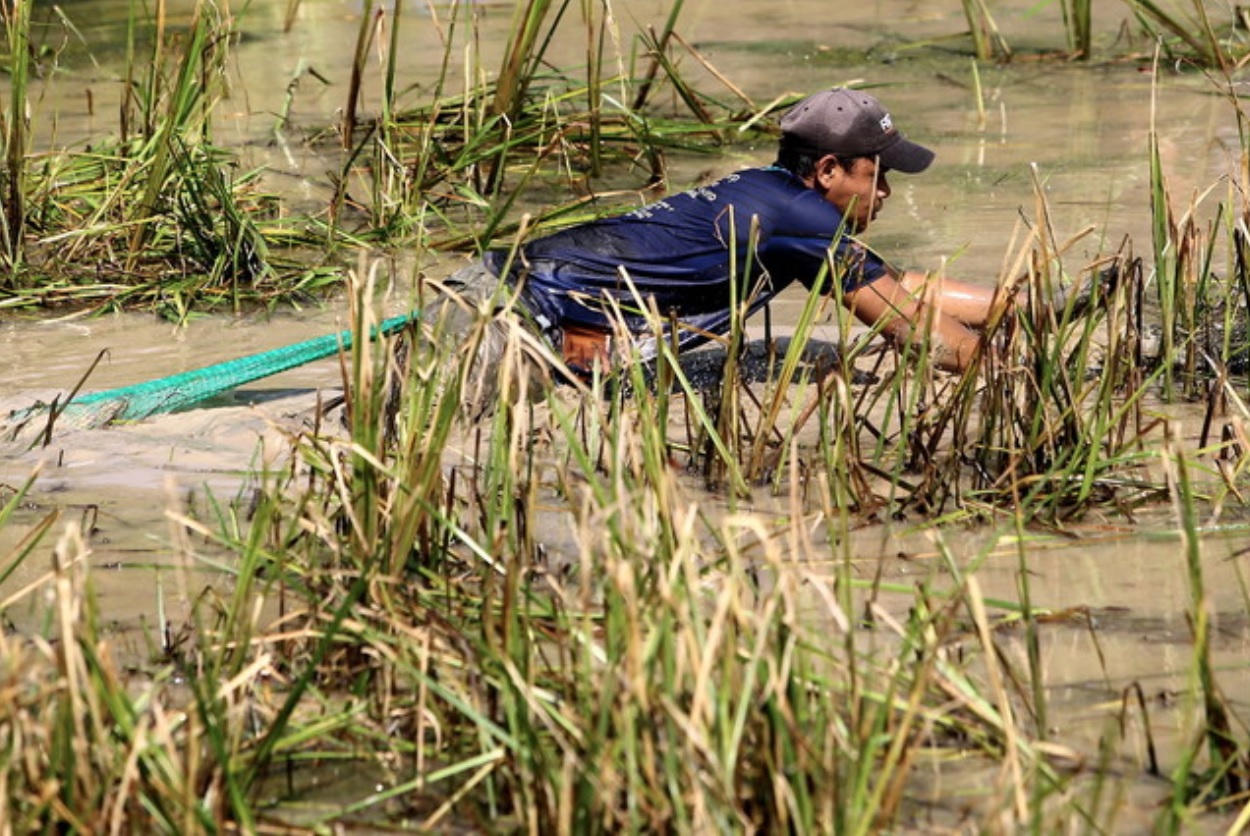 A man attempts to catch fish with his bare hands. — Bernama photo

KUALA PILAH (Sept 13): Fishing is a fun activity that has been around for ages, and fishing with hands was the first form of fishing that man ever tried.

In Negeri Sembilan, catching fish in the mud using your bare hands known locally as ‘ngoca’ is set for a revival.

Once a popular traditional social activity and unique to the state, ngoca is a group activity held in the river, river mouth or a pond.

It is commonly practised by padi farmers after the rice harvesting season especially when most rivers, river mouths or dams are drying up.

Towards this end, the Terachi Cultural Village here has been designated to promote ngoca activities among youths as part of a concerted effort to preserve the state’s cultural heritage.

This writer is among the participants of the National Water Resources Expedition to Muar River organised by the Department of Irrigation and Drainage (DID) from Aug 22 to Aug 25.

The expedition aims to provide an exposure to participants on the importance of conservation and sustainability of rivers in the country including the Muar river basin.

It was a day for mud — lots of sweat — for 20 people who took the challenge under the blazing sun in the first mayhem to go hand fishing in the muddy paddy field.

Above all, everyone enjoyed fishing for freshwater fish such as sepat, puyu and keli in the 20X50 metre wide paddy field.

For the participants, the activity was also a form of exercise as they had to do a lot of bending and running in the muddied plot of land to catch fish with their bare hands.

Beyond the activity of play, the traditional game provides the opportunity for forging ties with the villagers as cooperation from all parties is needed to ensure the event’s success.

As with other popular traditional games, ngoca is also losing its lustre among the younger generation, with only a handful of enthusiasts, as many prefer to play games on their mobiles or latest electronic gadgets.

According to an engineer from the Negeri Sembilan Department of Irrigation and Drainage (JPSNS) for Kuala Pilah District, Mohd Zamri Ali, his department has been working closely with the state government to ensure the traditional game does not fade into oblivion.

“The state government through the Negeri Sembilan Tourism Board in collaboration with the Kuala Pilah District and Land Office and various parties including JPSNS are promoting ngoca by designating the Terachi Cultural Village as the main location for the traditional event annually.

“Besides that, it is crucial that we continue to ensure our rivers are clean and their natural state is preserved.  This is because, river pollution will indirectly damage the farmers’ padi yields and disrupt the food supply chain to the public,” he added.

He said ngoca activities are closely associated with the importance of conserving the river water resources.

“Padi farmers in particular rely on the nearby irrigation system to irrigate their paddy plots and the water supply is often sourced from the nearest river.

“For villagers here, the river water that flows into their paddy fields comes from the Terachi river, with its upstream located at Gunung Angsi in this district.

“The Terachi river, which is among the Muar river basins, is the longest river in Negeri Sembilan and flows through several districts namely Kuala Pilah, Jempol and Tampin. It then flows to Johor through Segamat district and ends at the estuary of the Muar river in Muar district,” he said.

On the Terachi Cultural Village as the centre for ngoca activities, Mohd Zamri said, this is because plots of land under padi cultivation in the village are owned by the state government and under the charge of the Kuala Pilah District Officer.

As such, any cultural activities held should not affect padi cultivation activities in nearby villages.

“Ngoca is usually organised once in two years that is after the padi harvesting season. However here, we can carry out ngoca activities throughout the year as eight paddy plots here are fully gazetted for the purpose.

“Construction of the ngoca site here started since 2020 after the success of a series of ngoca football festivals held for the public at Juasseh mukim in 2019.

“The state government agreed to set up a permanent site for ngoca through an allocation from the Negeri Sembilan Tourism Board with a cost of RM450,000 covering construction works of eight ngoca ponds, secondary river mouths, water control gates as well as farm irrigation turnout (FIT).

“Besides that, a total of RM415,000  has also been allocated to upgrade the disposal drain as well as the construction of a 130-metre long river mouth so that participants can soak in the water in groups to cleanse themselves after being covered in mud as they rekindle memories of past generations,” he added.

In addition to ngoca, he said, several other activities will also be held including duck-catching, pillow wrestling, tug-of-war and football at the paddy field site provided for.

Meanwhile, an engineer at the DID Water Resource Management and Hydrology Division, Nur Hareza Rezuan opined that efforts to preserve and restore the water river source do not rest solely on the stakeholders alone but on every member of the community.

He said ngoca should be preserved as a traditional activity as it can directly educate residents on the importance of river conservation in meeting the demand from domestic and agricultural consumers here.

“The people of Negeri Sembilan are fortunate as the state DID is always aware of current issues related to the importance of the Muar river. We also know when the river quality here is good and safe for use given that there are many water treatment plants (LRA) built along the Sungai Muar river basin here.

“In this state alone, many LRA distribute clean piped water supply to consumers in the respective areas and this clearly shows the commitment of stakeholders in ensuring sufficient water supply for the people,” he said. — Bernama