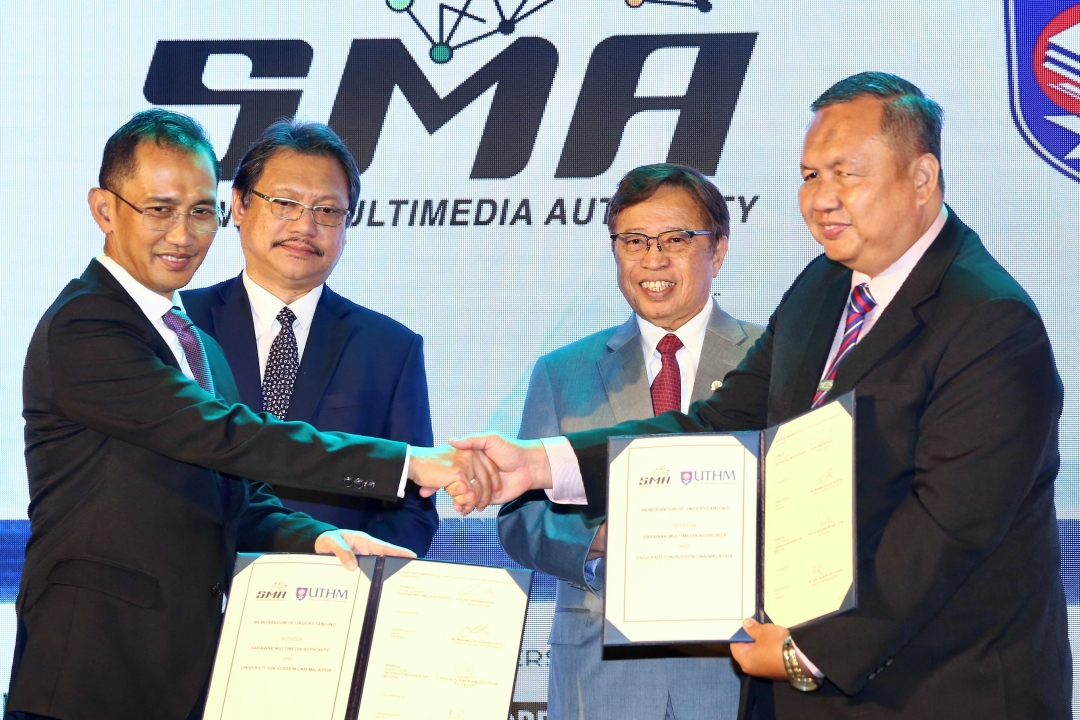 Abang Johari witnessing the exchange of MoU between SMA’s Zaidi (left) and UTHM vice chancellor Ruzairi (right). On the left behind is Hazland. – Photo by Muhammad Rais Sanusi

“Of course, embarking on 5G connectivity will cost money but otherwise, the government’s smart initiatives might not work. The data collected needs to be in real-time and we can only react correctly when we have the accurate data.

“Such immediate reaction will be able to reduce risk. Otherwise, the data we received might be one hour or three hours late and whatever actions that we have undertaken might no longer be suitable to the changing situation on the ground,” he reasoned.

Abang Johari also told the audience that he and his cabinet had recently returned from a working visit to South Korea and he was impressed with their technology in data collection and processing to respond to natural disasters, such as typhoons.

Abang Johari said the state government had already spent RM3 billion to upgrade connectivity infrastructure in the state, through working closely with Sarawak Multimedia Authority (SMA), and this was on top of the assistance provided by the federal government.

“Sarawak cannot rely on the federal government alone due to the huge land size of the state and other states in the country are also requesting for federal funding. On our part, we will try to source for as much money as possible to develop our infrastructure,” he said.

Abang Johari hoped the federal government could take part in a joint approach with the state to upgrade basic infrastructure, including installation of fibre optic or cloud connectivity.

He further remarked that the smart city concept would play a key role in enhancing the state’s security and safety but privacy issue remains a concern.

At a press conference later, Abang Johari said the state government was targeting to construct 7,000 telecommunication towers across the state to provide better connectivity to the people.

“The second part is having commercial telecommunication companies to set up their dishes on the towers. However, they are quite slow in doing so due to the lack of business potential or commercial values. They are quite reluctant to go here,” he said.

Thus, as part of a network project under Sarawak Digital Economy Corporation (SDEC), Abang Johari said the state government might need to provide subsidies as part of a strategy to improve connectivity in more remote places.

During the ceremony, Abang Johari also launched ‘RESILIENT4WRD Lab: Resilient & Agile Cities for Future’, as part of Transcend Sarawak 2022, to serve as a platform to support agency collaboration, data and insight sharing to mitigate natural disasters in the state, including flooding and landslides, via real-time satellite data.