Wednesday, October 5
You are at:Home»Features»Growing from pain of separation, loss

Pageant girl believes everything, good and bad, has shaped her into the person she is today 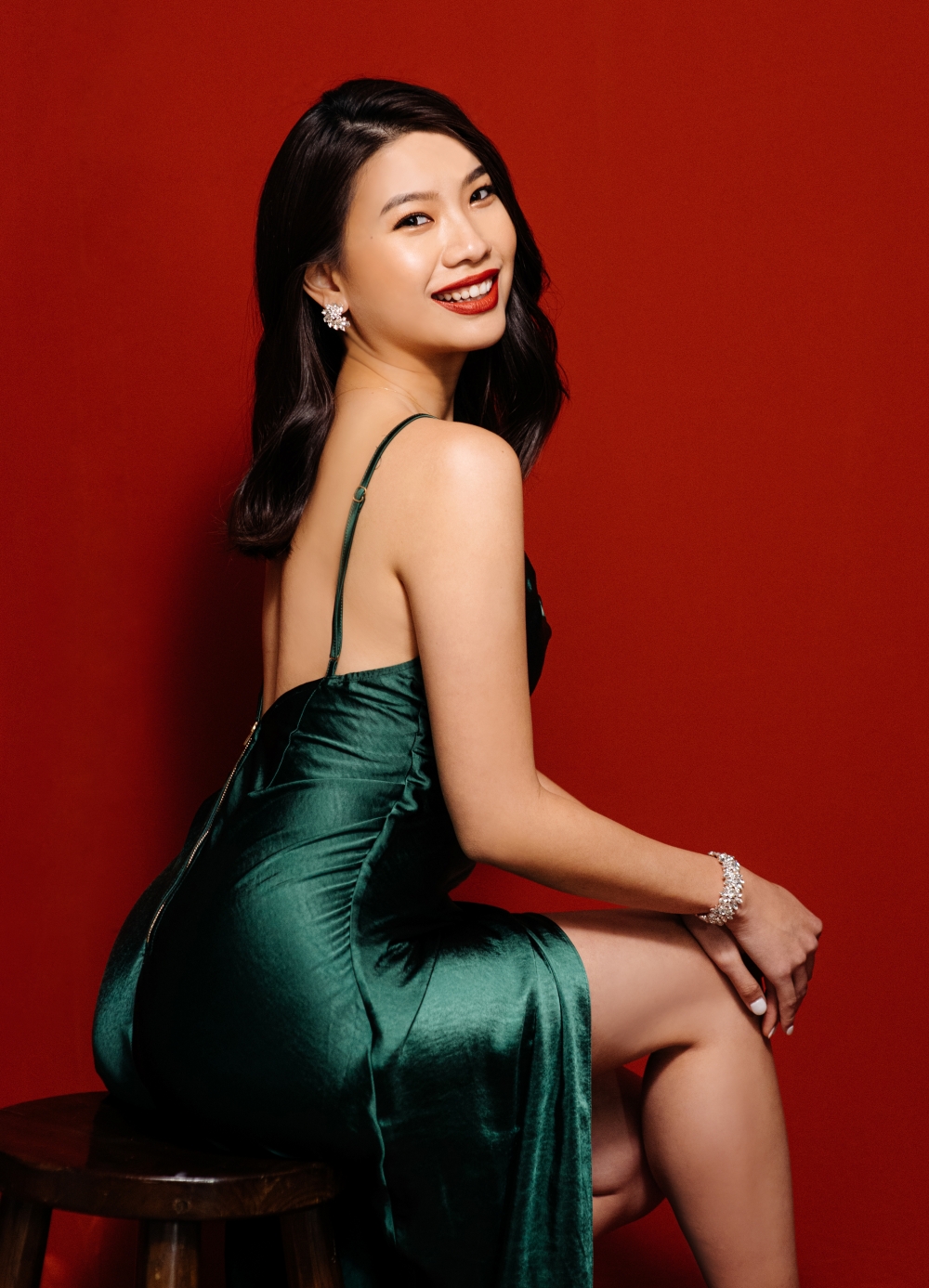 Evelyn in a stunning pose during her Miss World Malaysia 2022 photo-shoot, conducted by Andy Phe Photography.

THE poise, elegance and polished outlook are what anyone would expect of a pageant girl, but for Evelyn Ting, it is her back story that has truly shaped her into the person she is today.

The 25-year-old, who is the youngest of three siblings, highly regards family as ‘an unshakable value’ in her life, but she also upholds the importance of education.

At age 15, Evelyn moved to Sydney to further her education. Her mother stayed with her for two years before returning to Kuching.

At the time, her brother David and his family were already in Australia, where he had been working as an engineer with the Royal Australian Air Force since 2011.

Later on, her sister Emma came to attend a nearby university.

After graduation, she worked as a registered nurse in Sydney. 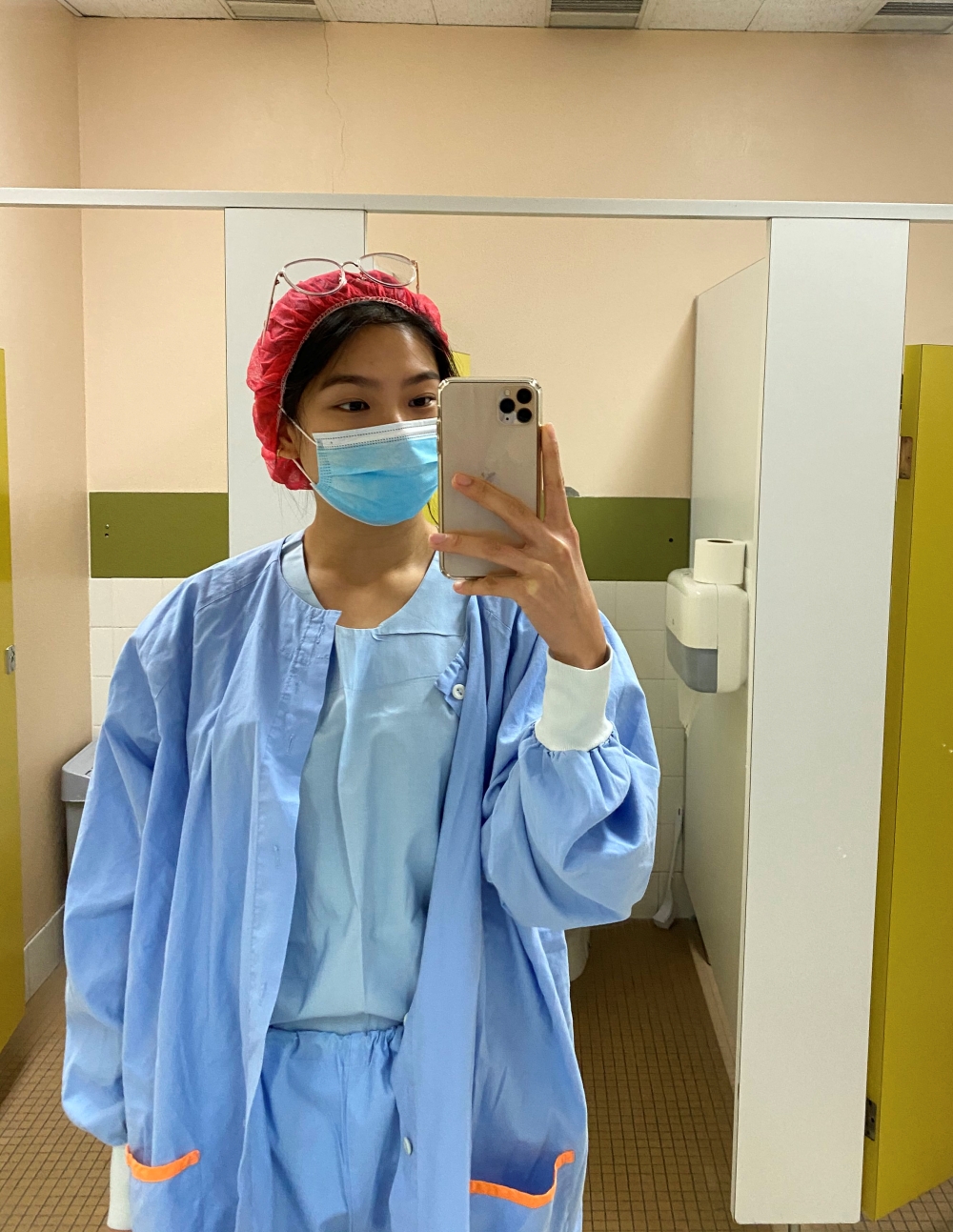 Evelyn posing for a selfie, taken when she was a registered nurse based in Sydney.

The pandemic forced shutdowns in many countries, including Australia which immediately declared the closing of its international borders in March that year.

The restriction on international travels forced Evelyn to tough it out being away from her family during such trying times.

However, she broke down when she received the news about the death of her father due to cancer later that year.

“I went back (to Australia) for my studies, and that was because Dad had asked me to go back.

“One chance, one Dad. 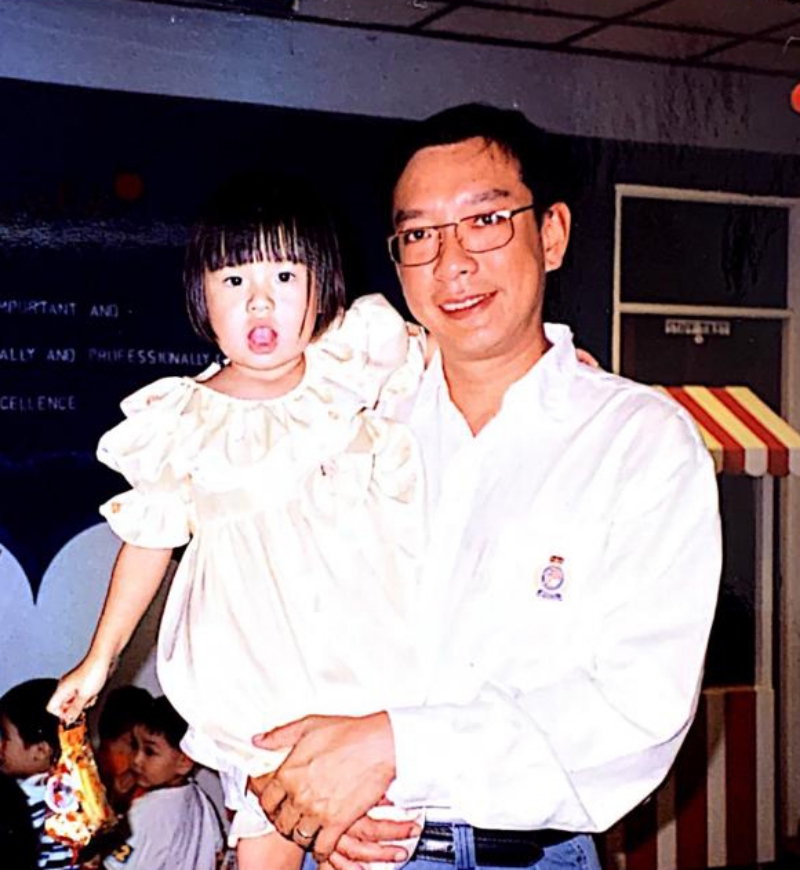 A photo of Evelyn and her father taken during her kindergarten days.

When Evelyn got to return to Kuching in January this year, following the lifting of travelling restrictions, it really hit home how important family was to her, and thus, she decided to stay a little bit longer despite the initial plan to move over to Melbourne where her brother and his family had just been relocated to.

“I was like – why not stay in Malaysia a little bit longer? Because who knows when I’ll be able to spend time with them for this period of time again,” said Evelyn.

She regarded the painful experience as a reminder for her to never take anything for granted, and to be grateful for the things and the people in her life now.

“You’d never know how much time you have with them, and definitely, you don’t want to look back and regret over not showing how much you love them,” she said. 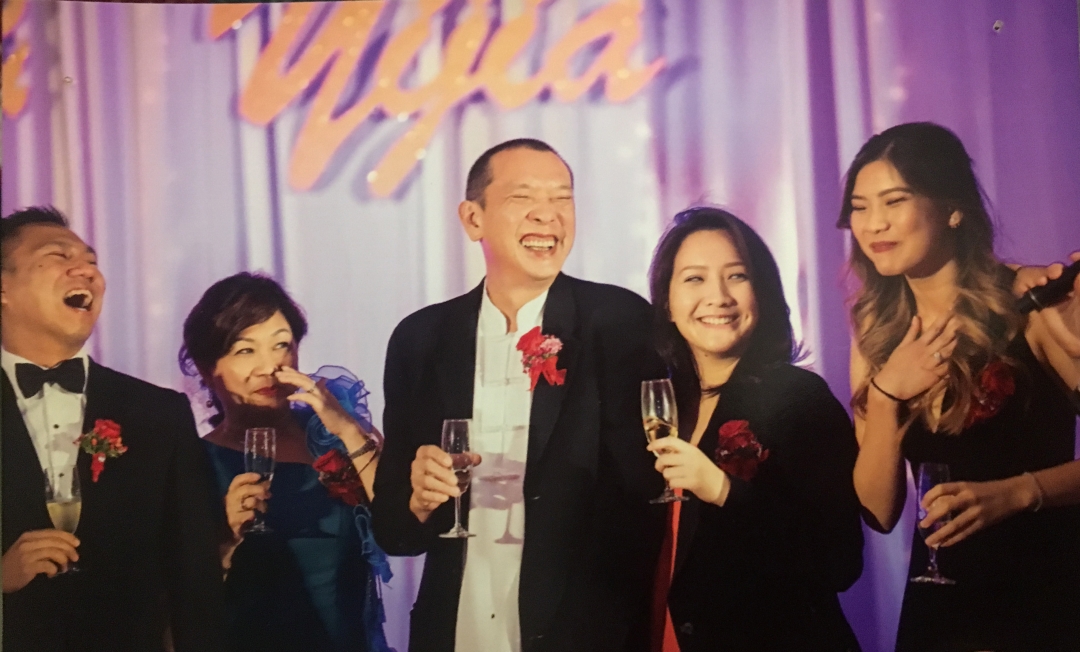 A photo from the family album shows (from right) Evelyn with Emma and their parents at David’s wedding in Kuala Lumpur, back in 2016.

After the bereavement, Evelyn began to settle herself at home in Kuching. It was in April when she ‘casually’ submitted an application to join the Miss World Malaysia 2022 – ‘casually’ was her word, because she never thought that she would make the cut.

As fate would have it, an email from the organisers reached her, confirming her qualification for an audition.

At that time, she was already in Australia visiting her brother and his family, who were still in the midst of moving their stuff from Sydney to Melbourne.

It was in that moment when she realised having gone from education straight to work, she had not really given herself a chance to explore anything over the creative spectrum of life.

“I think doing nursing was obviously something that I really wanted to do and to be completely honest, I knew that there was this aspect of life where I wanted to explore more.

“I’m the kind of person who likes to know what I’m getting myself into and I’d like to explore different kinds of things before making any decision, just to be sure of it.

“Even if it didn’t work out at the end of the day, going back to nursing wouldn’t be the worst thing at all, because I do like helping people.

“That’s the whole reason why I went into it in the first place, as a way to give back to the community,” she said.

For the pageant, Evelyn did a virtual audition before going back to Kuching, which got her shortlisted as a semi-finalist.

After that, she was tasked with creating four videos: one on introduction, one on talent, one on catwalk presentation, and one on advocacy.

With only one week given, she organised a team comprising photographers, videographer, make-up artist and fashion designers to help accomplish this task. 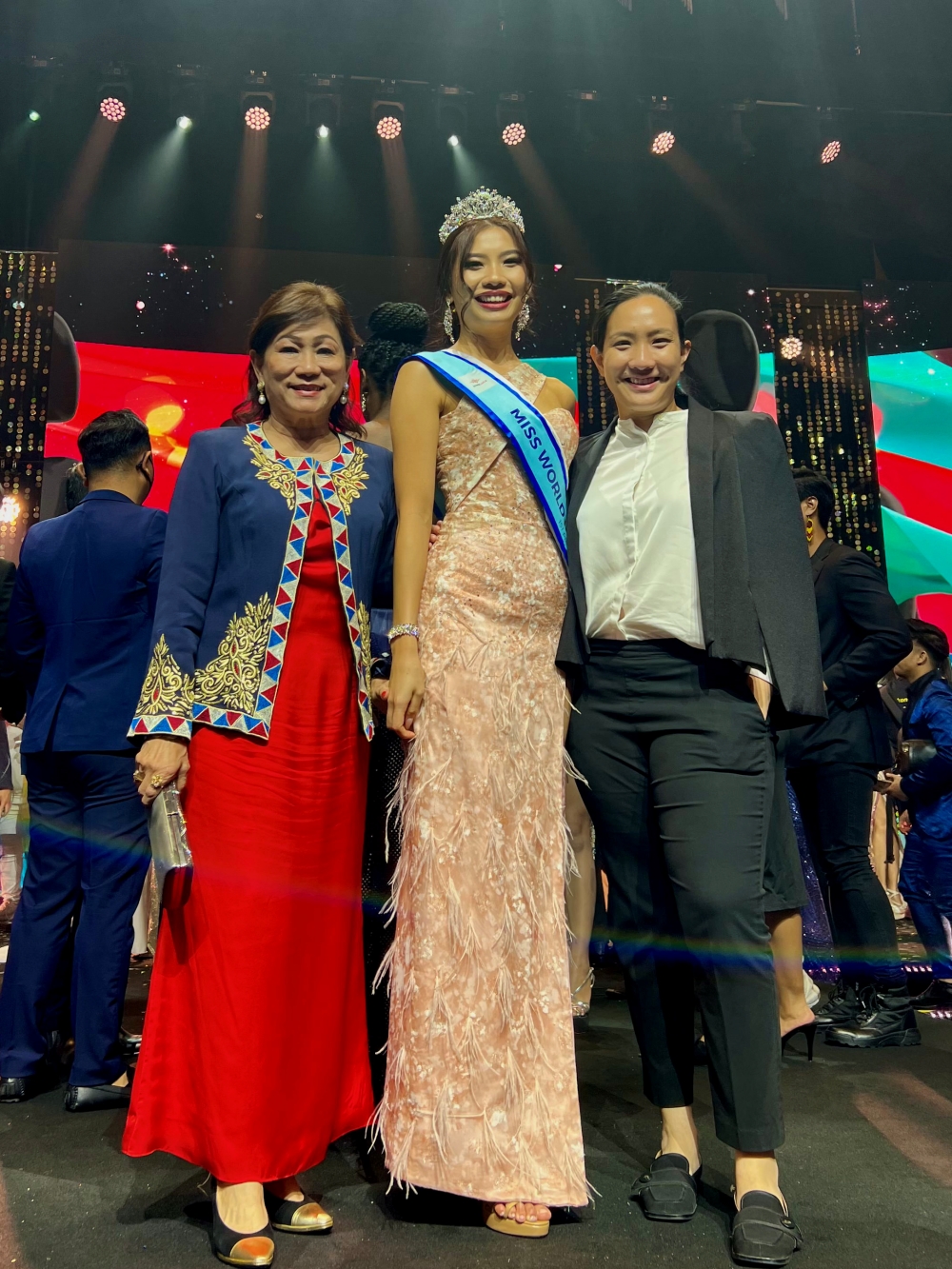 Evelyn with her mother and sister after the Miss World Malaysia 2022 finale in Kota Kinabalu.

It was Evelyn’s first pageant, so naturally she was uncertain about the direction that she should take.

“It was a different playfield from the fashion shows that I had done in my early years.

“I knew many pageant veterans were in the running for the Miss World Malaysia title this time, and they had more experience and knowledge than I had.”

It was amidst this mindset of her thinking about the worst case scenario, that she was reminded of the wisdom that her late father had imparted upon her.

“I was just like ‘you know what – just do your best; just give it your all’.

“That’s what Dad used to say.

“He would advise me: ‘No matter what you do, just do your best, and just wait and see what happens’,” she reminisced.

Evelyn went on to clinch the Miss World Sarawak 2022 crown after garnering the highest number of online votes during the semi-finals – earning her a spot at the grand finale of Miss World Malaysia 2022, staged on the Sabah International Convention Centre in Kota Kinabalu and livestreamed on hyperlive.tv.

Throughout the pageant’s season, she and the other finalists were involved in many activities, including philanthropic programmes, arranged by the organisers in and around Kota Kinabalu and Kiulu, a small town under the jurisdiction of Tuaran District.

When she and Wenanita Angang from Sabah were named the Top 2 out of the 15 finalists of Miss World Malaysia 2022, Evelyn’s feeling at the time was a mix of disbelief and anticipation.

“I’m going to be completely honest – a part of me didn’t even think that I would make it to Top 3, but another part of me kind of thought that I got a chance to do well in this competition.

“At that moment, Wenanita and I were holding hands and I don’t know about you guys, but I definitely felt the suspense.

“If you watched the footage (on hyperlive.tv), you could see me breathing really hard because I was actually struggling to breathe.

“I was like: ‘Oh gosh, what’s happening?” she recalled those few moments before Wenanita was crowned Miss World Malaysia 2022, and she was announced the ‘First Princess’ of the pageant.

Evelyn heaved a sigh of relief after that, knowing that she had done her best for the competition.

Nonetheless, she did not leave empty-handed. The Kuching-born beauty clinched the ‘People’s Choice Award’ (for garnering the most online votes in the finals), the ‘Most Eloquent Queen’ title, and also the ‘Best Designer’s Dress Award’ for her attire created by Harizan Khaider and Keith Sim.

Feeling a sense of gratitude for all the opportunities presented to her, Evelyn said she was blessed to have been surrounded by her family and also the experience that came as a Miss World Malaysia contestant.

“I have the organisation to thank, and also the pageant’s national director Sean Wong, Hyperlive and everyone involved, for being so kind and accommodating, and making the whole experience a really enjoyable one,” she said.

Evelyn admitted that the journey was a bit stressful, but she knew there were people who continued to support all the contestants, which was comforting.

“My Mom and my sister were actively involved in my pageant journey, having supported me from the beginning up to the grand finale.

“Throughout this eventful month, I’ve learned about what it’s like to be thrown into a deep end and go from zero to 100, to be in a ‘sink-or-swim’ situation, and to handle a team running on a tight deadline.”

However, Evelyn felt that it was also the experience of letting things go with the universe and at the same time, allowing her to take charge and decide for herself what she wanted and would want to do.

“I think I finally gave myself the chance to breathe a little bit, especially after the past two and a half years being in Australia on my own.

“I’m very blessed to have many people around me, be they my family, my friends or the community. And I’m very grateful for the life that I’ve had so far.

“Everything that happened to me, good and bad, has led me to become the person I am right now,” she said. 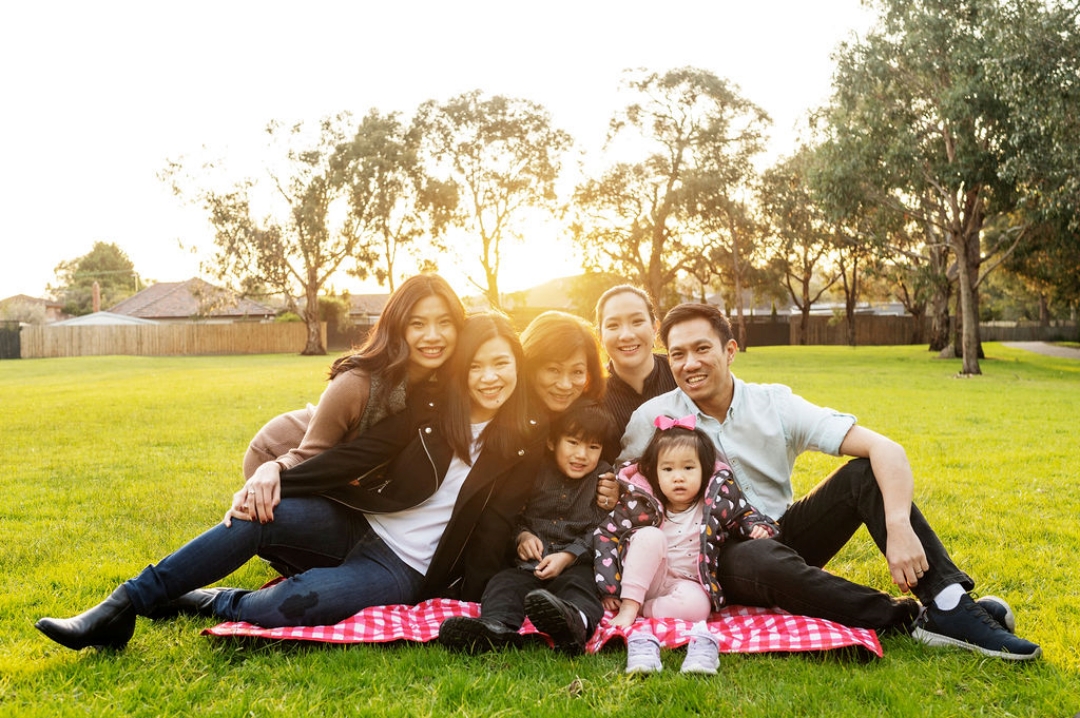 Evelyn and her family in Australia.

‘World as a platform for adventure’

Staying in Malaysia – be it her home city Kuching, or Kuala Lumpur – remains as one of Evelyn’s plans for now.

Seeing the world as ‘a platform for an adventure’, she is open to the possibility of working in the media and entertainment industries as she intends to further explore the creative side of life.

Nonetheless, her commitment now is performing her duties as the ‘First Princess’ of Miss World Malaysia 2022.

This title is akin to the regular ‘first runner-up’ of a pageant, in which she would take over should the crowned winner is unable to perform her duties.

“I do have to be ready for the final (Miss World) in any case that Wenanita is not able to go.

Evelyn plans to be based in Kuching throughout next year and probably beyond that, but those who know her would not be too surprised if they caught her making changes all the time.

“My family and I are very spontaneous; we’re very much on the go where it’d be like, ‘let’s see how this goes’, instead of planning everything from top to bottom.

“But surely, I’ll be here and you’ll be seeing more of me.”