Saturday, December 3
You are at:Home»News»Sarawak»Henry: Dual-carriageway from Kpg Sebuluh to Bau soon 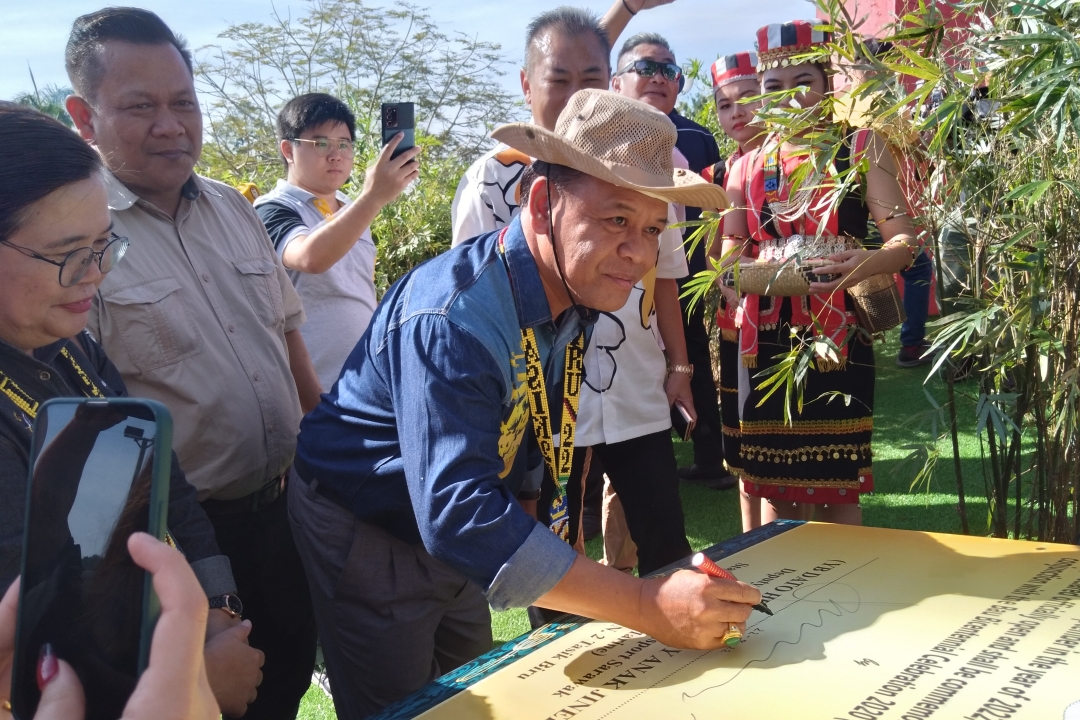 Henry signs a plaque to mark the opening of the Bau Bicentennial Bridge at Tasik Biru.

BAU (Sept 22): A dual-carriageway will be built from Kampung Sebuluh to the town, said Deputy Minister of Transport II Dato Henry Harry Jinep.

He said the widening of the 5.4-kilometre stretch was one of the state government’s efforts to improve Bau and to ease traffic flow from Bau Town to Lundu and Batu Kawa.

“A sum of RM100 million had been allocated by the state government to implement the project.

“The proposed project will be tendered out in October,” he told reporters after the opening of a suspension bridge across Tasik Biru here today.

The Tasik Biru assemblyman said the state government is committed to improving Bau, which has been attracting a huge number of visitors because of its several interesting places of attraction.

He said after the proposed Sebuluh-Bau Town road widening project, a dual-carriageway will also be built from  Bau Town to Batu Kitang.

“We have to implement phase one, the Sebuluh-Bau Town project first. After that, then we proceed to phase two, from Bau Town to Batu Kitang.

“The second phase project will cover a distance of about 12 kilometres,” he said.

Henry said the first phase project was already at the design stage, and after the design is approved, they will tender it out.

“The main issue now is the relocation of services. Of late, we have been quite robust in improving our pipeline and so on.

“So the moment we do the dual-carriageway, we have to relocate the services again.

“It’s a process. So what we have done may not necessarily be there permanently,” he said.

On the suspension bridge, Henry said they had named it as Bau Bicentennial Bridge. He said crossing the RM1-million bridge will be free of charge.

“This is a state government funded project, so we cannot charge any fee.

“However, for safety reasons only 20 persons are allowed to walk across it at a time,” he said.

Henry believed the bridge will become a new iconic attraction in Tasik Biru and Bau as a whole.

He pointed out that the bridge was to replace the first one that was built in the 1970s after the first wave of gold mining activities ended.

It was then demolished during the second gold mining rush in Bau Lake over 20 years ago.

The new suspension bridge is about 60 metres long, 2.20 metres wide and over four metres high.

“The construction of this bridge started in December 2019 but was temporarily stopped because of Covid-19.

“The design is based on the Waihi Bridge in New Zealand, which we have visited.

“Now, we have got it, it’s already completed, providing a new and different scenic view of Tasik Biru,” he said.