Wednesday, October 5
You are at:Home»News»Court»Zahid Hamidi’s VLN trial: Will he walk or enter his defence? 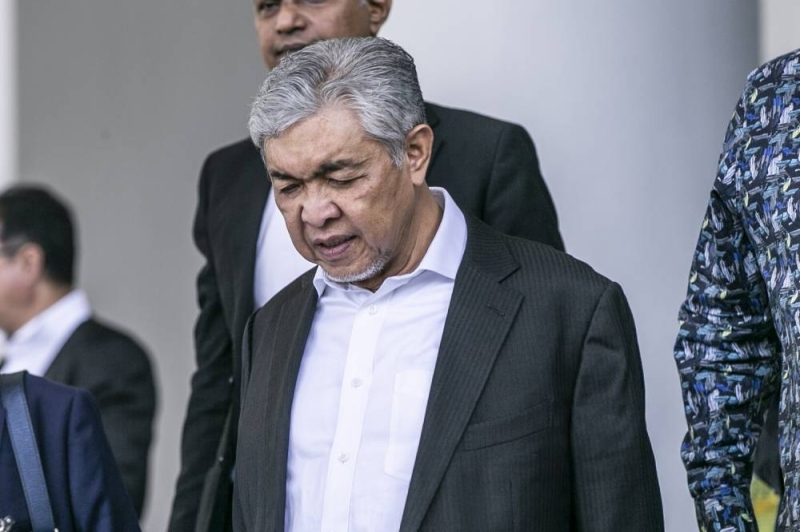 SHAH ALAM (Sept 23): Datuk Seri Ahmad Zahid Hamidi will find out today whether or not he will have to defend himself against 40 charges of taking bribes from Ultra Kirana Sdn Bhd (UKSB), the company awarded a government contract for a foreign visa system.

For those who might have forgotten, here’s a refresher on what the case is all about and what the possible outcomes might be.

Now the Umno president, Ahmad Zahid was first charged in June 2019 with 33 counts of receiving bribes amounting to S$13.56 million (RM42 million) from UKSB as inducement for himself in his capacity as a civil servant and the then home minister to extend the company’s contract to operate One Stop Centres in China and integrated visa system better known by its Malay initials VLN (short for Visa Luar Negara).

He was also charged with another seven counts of obtaining gratification in various currencies from the same company for himself in connection with his official work. In the course of his trial so far, these cash kickbacks are said to amount to S$1.15 million, RM3 million, CHF15,000 and US$15,000.

The Bagan Datuk MP is said to have committed all these offences at the deputy prime minister’s official residence in Seri Satria, Presint 16, Putrajaya and his private residence in Country Heights, Kajang, Selangor.

Ahmad Zahid was home minister when the Barisan Nasional was government from May 2013 until May 2018. His ministry was in charge of the Immigration Department.

Lead prosecutor Datuk Raja Rozela Raja Toran has described the now 69-year-old as taking advantage of his position as a public officer to reap monetary benefits for himself between October 2014 to March 2018.

Trial and what has happened so far

Despite the extensive charges, Ahmad Zahid’s trial proper started only two years later on May 24, 2021.

All in, the prosecution has called 18 witnesses over a span of 29 days of hearing.

Throughout the trial, prosecutors sought to portray Ahmad Zahid knowingly exceeding his official functions as a home minister in return for cash payments from UKSB as evidence has overwhelmingly shown.

Prosecutors also highlighted the combined direct, circumstantial and documentary evidence to establish that Ahmad Zahid had acted with full knowledge about UKSB’s working relationship with the Home Ministry in relation to the government’s award of the VLN contract.

The most contentious evidence submitted by the defence in court was a personal ledger that kept count of cash payments made to various politicians, government staff and Ahmad Zahid owned by UKSB’s former administrative manager David Tan Siong Sun.

During trial, lawyers acting for Ahmad Zahid did not once dispute the accusation that their client had received millions in cash from UKSB. Instead, the defence chose to highlight that the contentious ledger named other high-profile people. This was noted by the prosecution in its submission.

What if Ahmad Zahid is acquitted?

Should the judge decide that the prosecution has established a prima facie case, Ahmad Zahid will be ordered to enter his defence.

He then has three options to do so: make a sworn evidence from the witness stand where he will be subjected to cross-examination; make an unsworn statement from the dock; or remain silent.

But the judge can also decide there is no prima facie case. That would mean Ahmad Zahid would be given a discharge amounting to an acquittal.

But lawyer Muhammad Rafique Rashid Ali said if Ahmad Zahid is acquitted at this stage, the prosecution can still file an appeal within 14 days at the appellate court.

Muhammad Rafique said this procedure is allowed under the Court of Judicature Act.

He explained that if the Court of Appeal decides to overturn the acquittal, the trial will resume at the High Court and Ahmad Zahid would have to enter his defence.

If the acquittal is maintained, the prosecution can again file an appeal at the Federal Court within 14 days of the Court of Appeal’s decision where the same process would be repeated.

The only difference, Muhammad Rafique pointed out, was that any decision made by the apex court is final.

“If the Court of Appeal still maintains that the prosecution failed to prove a prima facie case, then the next step is an appeal to the Federal Court.

“At the Federal Court — which also has the power to call for defence — if that happens then his case will revert to the High Court, or if it feels the appeal has no merits, then the appeal will be dismissed and Ahmad Zahid cannot be charged because that is the final court,” Muhammad Rafique told Malay Mail.

But even if Ahmad Zahid walks free today from the VLN bribery charges, he is still on trial for another corruption case where he is accused of 47 criminal breach of trust, corruption and money laundering charges involving tens of millions of ringgit belonging to Yayasan Akalbudi, the charity organisation he founded. — Malay Mail

Previous ArticleFatimah: 3,067 nabbed for drug, substance abuse from June to August this year in S’wak
Next Article Boeing charged with misleading investors on 737 MAX safety, fined US$200 mln