Tuesday, December 6
You are at:Home»Columns»Uncle DI»Importance of preserving tangible heritage 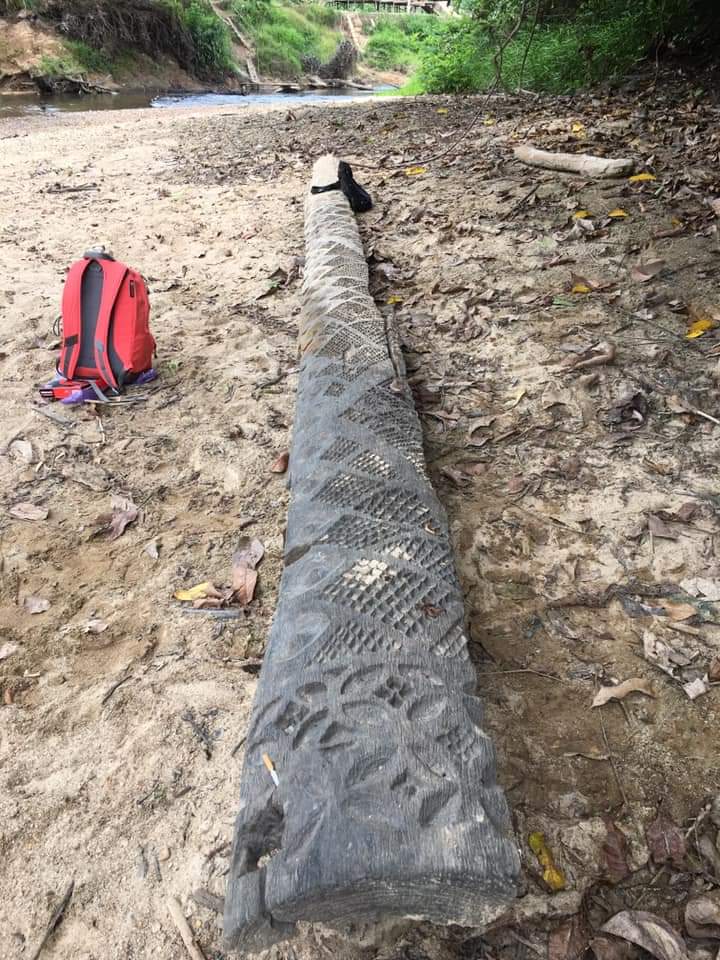 File photo of a ‘klierieng’ discovered in Sungai Penyarai in Tatau last year, which the columnist describes as ‘a concrete evidence of a tangible Sarawak identity’.

ON Thursday last week, I had an invitation from ‘Apai Ling’, a venerable friend, for a chat over a cup of coffee. The meeting turned out to be a serious discussion on a subject dear to his heart and to mine – the preservation of ancient artefacts, objects, and sites of historical value in Sarawak.

Dato Sri Edmund Langgu Saga, former deputy federal minister of agriculture, was referring to the media report (The Borneo Post – Sept 13, 2022). Apparently, some people are opposed to the government’s plan to salvage the three ‘klirieng’ (funerary poles) now partially buried in the Penyarai River in Tatau, and to re-erect them near the district office in town.

It is the proposal to remove the monuments far away from the riverine area that has sparked a controversy. The opponents resorted to constructing a barrier to prevent entry to the site of the monuments, to register their disapproval.

We thought how unfortunate this incident was, but we were hoping that the local communities of Tatau/Punan Bah and Beketan of the area would soon agree on an amicable solution in terms of the permanent siting of the precious monuments.

Without wishing to get involved in the controversy, we had a couple of ideas of our own. Here goes: re-erect the monuments in the area of Penyarai, preferably on a promontory, suggested Dato Sri Edmund and I agreed with him.

The Dato Sri knows a lot about the customs and traditions of the people in Ulu Kakus; himself a descendant from a Bekatan chief, Entingi.

The importance of locating and preserving any tangible heritage is the responsibility of the government and the traditional owners, not only for tourism purposes but for the sake of showing evidence of an ancient civilisation, and the identity of the people who were in occupation of the general locality once upon a time.

The descendants of the people who made those poles are still alive, forming an essential part and parcel of the population of Malaysia. It is vital that modern developments are not allowed to wipe out evidence of indigenous identity forever.

Dato Sri Edmund was lamenting the fact that several landmarks of historical value in Sarawak had completely disappeared. He was hoping that the Batu Tanam Demong in Ulu Krian on a hill Nanga Gerenjang would be properly protected.

Who would have known about the Batu Katak lying between Sibu and Bintulu; it has disappeared from the face of the earth!

I could add to his list of erstwhile landmarks. What about the Council Negri building in Bintulu?

This monument would have survived had it been carefully preserved.

On Sept 8, 1867, Charles Brooke, Tuan Muda and nephew of Rajah James Brook, called for a meeting of the community leaders in Bintulu to discuss affairs of state.

The first meeting of the Council Negri was held in Bintulu!

Had the building in which they were meeting been restored, the people who were in Bintulu last week to celebrate the Malaysia Day would have seen the first symbol of the cradle of parliamentary democracy in Malaysia, right here in Sarawak, in the old town known as the producer of the most delicious ‘belacan’ (shrimp paste)!

As history buffs, both the Dato Sri and I would prefer that the monuments be salvaged from the riverbed, repaired and re-erected in the general locality rather than be brought out of the area and re-erected permanently elsewhere.

If this looks like supporting those who put up blockades to oppose the removal of the monuments, it would be purely coincidental.

We have no intention nor the inclination to meddle in a local dispute, not by any stretch of the imagination!

Our interest is purely the preservation of something of historical value – pure and simple. The best people to handle the dispute are the descendants of those who put up these monuments; common sense and cool heads will eventually prevail.

If not already done, form a trust, funded by the government, to look after the ‘kliriengs’ once it is decided NOT to remove them far away from the present river system.

The Talang Talang Island was claimed as the private property of a Malay family from Kuching.

The Sarawak Museum wanted to ensure that turtles would be protected from extinction and egg sales ‘regulated’.

To the best of my knowledge, the sale of eggs was the right of the trustees and the Sarawak Museum, acting on behalf of the ‘owners’ of the island.

Back to the kliriengs (secondary burial poles). Build a homestay somewhere near the new site, by taking a leaf out of a United Nations-awarded project at Rumah Bandi in Sungai Utik, in West Kalimantan, Indonesia.

Go to Sungai Utik and learn from the Ibans there how they keep their ‘pemakai menoa’ (territorial domain) intact, and to earn a living from the scheme at the same time!

Previous ArticleStoic and resigned, she battles on
Next Article A prolonged La Nina episode