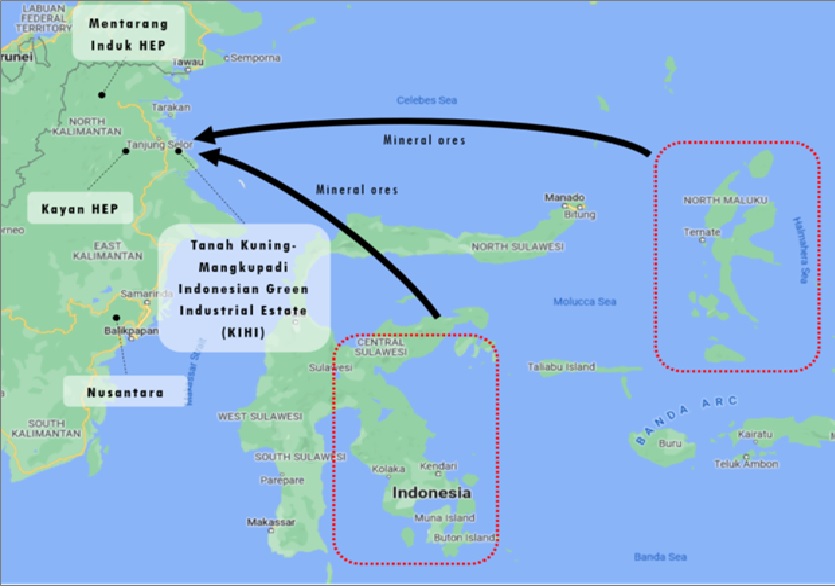 Approximate locations of the projects. 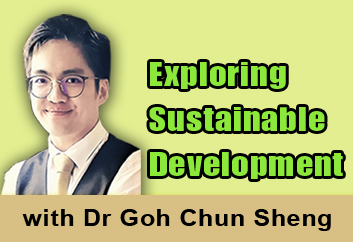 INDONESIA has never shied away from expressing its hunger for modernisation and industrialisation.

The country has been taking a pragmatic approach to achieving its dream of leapfrogging toward a high-income country. Developing a ‘green’ and high-value industrial sector is what President Joko Widodo (Jokowi) deems the key to transforming the country by taking a ride on the wave of the global climate agenda.

The strategy will be built upon Indonesia’s comparative advantages, including sunlight, land, water, feedstock, and labour force.

In his whirlwind visit in July 2022 to the three regional powerhouses in the Asia Pacific, i.e., China, Japan, and South Korea, the President consistently highlighted Indonesia’s request for investment and technological support in developing its first ‘green industry park’ in North Kalimantan, namely Tanah Kuning-Mangkupadi Indonesian Green Industrial Estate (KIHI). It has been deemed Indonesia’s flagship to knock on the door of an advanced economy.

As described in an earlier article, in the current plan, mega hydropower backed by Chinese technologies will serve as the primary source of electricity for the park’s operation. The 9,000MW Kayan Hydropower Project in Bulungan District, to be built by Power China, has already begun construction in 2019.

Another smaller project with a capacity of 1,375MW, namely the Mentarang Induk Hydroelectric Project in Malinau District, will be jointly developed by a local firm with Sarawak Energy.

While Korea’s dam constructing firms have been active in Southeast Asia, the Korean-backed hydropower projects in Indonesia are on relatively smaller scales. Japan’s presence in Indonesia’s hydropower sector is rather limited. President Jokowi managed to bag home about US$320 million in loans from Prime Minister Kishida for an Indonesian hydropower project during his recent trip to Tokyo. As a comparison, this amount is only about 1.5% of the Kayan project’s total cost.

The core of Indonesia’s green industry development plan is establishing a regional value chain for electric vehicle (EV) manufacturing. Holding almost a quarter of the world’s nickel reserves, the country has a comparative advantage in making batteries for EVs. Nickel is also an essential ingredient for stainless steel manufacturing.

By banning the export of nickel ore, Indonesia is pushing to keep the country’s added value. In the last few years, China and Korea have been expanding in nickel mining and processing in Indonesia, especially in Sulawesi and North Maluku.

However, there has been substantial pressure from the market to phase out fossil fuels, particularly coal, in powering nickel processing facilities. This situation has led to the idea of moving the ore processing components to Tanah Kuning, powered by the said mega hydropower plants.

Furthermore, the President is keen to expand downstream to battery manufacturing. Indonesia can now produce intermediates for making battery cathodes with Chinese technologies. It may soon be able to manufacture batteries for EVs with a Korean-backed facility which is currently under construction in West Java.

In contrast to China’s and South Korea’s swift actions, Japan is relatively slow in this race to EV, as it was rather keen to push for hydrogen-based or hybrid cars. The disagreement in development directions has even caused some friction between Japan and Indonesia, with the Coordinating Minister for Maritime Affairs of Indonesia, Luhut Binsar Pandjaitan, openly accusing Japan of ‘technology colonialism’.

After President Jokowi’s recent trip to Tokyo, there seems to be a U-turn on this –Toyota has pledged to invest US$ 1.8 billion in the EV industry in Indonesia.

Whether co-fired with coal or burnt in stand-alone units, bioenergy may play a complementary role as baseload power. This option remains attractive due to the location of the said industrial park – it is surrounded by large tracts of oil palm plantations in both Kalimantan and the adjacent Sabah state of Malaysia, which generate an enormous amount of biomass residues from both the plantations and the mills.

Recently, it was reported that the Indonesian coal producer Mitrabara Adiperdana (MBAP) has started constructing its first wood pellet plant in Malinau District. The pellets will be exported through Tarakan port to Japan, aiming to tap into the country’s feed-in-tariff scheme. The plant is expected to start operation in early 2024, targeting an annual output capacity of at least 120,000 tonnes. The raw materials will come from MBAP’s 10,000-ha timber plantation, mainly eucalyptus, kalinda, and sengon.

Indonesia’s grand plan for the green industry is still in its infancy. As things are evolving rapidly, it is worth paying close attention to the dynamics and complexity of the involvement of investors along the entire chain.

The participation of foreign capital and technology providers can be viewed as both a blessing and a curse, particularly from China, Japan and South Korea. Their collaborations and competitions may make a valuable contribution to pushing Indonesia’s ‘green’ agenda but may also place the country in an awkward position of geopolitical struggles.

Indonesia will have to manoeuvre this carefully to achieve its dream of transforming toward a green and advanced economy.