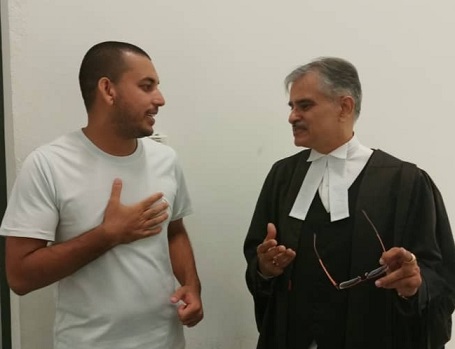 Ahmad (left) with his counsel Rakhbir after Ahmad’s acquittal on Monday.

KOTA KINABALU (Sept 26): A Pakistani trader on Monday won his appeal at the Court of Appeal here to set aside a lower court’s decision to affirm his conviction and 12 years’ jail for allegedly molesting his teenage female worker.

Justice Datuk Hanipah Farikullah, who sat together with Justices Datuk Supang Lian and Dato’ Hashim Hamzah unanimously acquitted and discharged Ahmad Imtiaz, 26, from the charge under Section 14 of the Sexual Offences Against Children Act 2017.

Ahmad, who was represented by counsel Dato’ Seri Rakhbir Singh, had appealed against the conviction and sentence for the second time on Monday.

On February 9, he had lost in first attempt at the High Court here to overturn the conviction and 12 years’ imprisonment for allegedly molesting the juvenile.

The appellant was found guilty by the Sessions Court here on November 4, 2019 of committing the offence on the 14-year-old girl at a shop in Bandar Baru Penampang on February 20, 2019.

Apart from the jail sentence, the lower court had also ordered Ahmad to be put under police supervision for two years after completing his sentence.

Previous ArticleOver one million tourist arrivals to Sabah expected this year
Next Article Only two quit, not 300, says Bersatu Putatan