Monday, February 6
You are at:Home»News»Sabah»Over one million tourist arrivals to Sabah expected this year
For the freshest news, join The Borneo Post's Telegram Channel and The Borneo Post on Newswav. 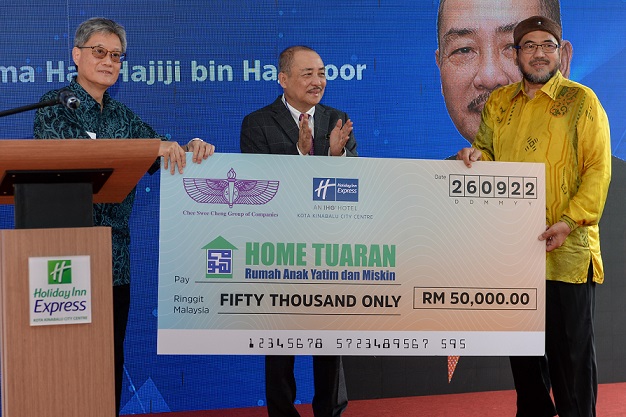 KOTA KINABALU (Sept 26): Sabah welcomed 857,675 visitors as of July this year representing a significant increase of 632 per cent compared to the same period last year with an estimated RM1.4 billion in tourism receipts.

So far, he said the increase was driven by the domestic tourism sector which contributed a total of 785,123 visitors, an increase of 582 per cent for the same period.

“With the reopening of international borders, the number of international tourist arrivals recorded significant growth with 72,552 arrivals, an increase of 3,680 per cent for the first seven months of 2022.

“This is indeed a good sign and slowly but surely, we see visitor arrivals picking up and I am happy that tourism industry players have joined hands with us to push this upward momentum,” he said.

Speaking at the official opening of the state capital’s latest hotel, the Holiday Inn Express on Monday, the Chief Minister was also heartened to note that air connectivity, both domestic and international, is on the upward trend.

For the international aviation sector, Sabah is now connected to five international destinations – Singapore, Bandar Seri Begawan, Incheon, Manila and Bangkok with a total of 39 flights per week and seat capacity of 7,016.

“The incentive aims to support and encourage airlines to reinstate air connectivity, commence new international routes, or hold special charter flights to Sabah. This is important since 96 percent of tourist arrivals to Sabah are by air,” he said.

Hajiji said that at the domestic level, efforts are focused on smart collaborations with industry partners such as airlines, tourism associations, and the Malaysian Tourism Promotion Board (Tourism Malaysia).

These collaborative initiatives include high visibility campaigns as well as familiarisation trips for media and social media influencers, he said, adding that participation in tourism fairs such as MATTA Fair and MITM Travel Fair will be further enhanced.

During the height of the Covid-19 pandemic, he said the State Government charted a development plan and launched the Hala Tuju Sabah Maju Jaya (SMJ) Roadmap, outlining its vision, strategy and priorities for the next five years from 2021.

“It was to be a pivotal blueprint to bring Sabah into the next decade and to provide clarity on Sabah’s key focus areas, especially for businesses and investors resulting in high-impact multi-billion ringgit investments taking off.

“And the best news is that Sabah has raked in RM9.9 billion worth of foreign investments from January to September this year, all achieved in the midst of the pandemic,” he said.

The Chief Minister said most importantly these investments also produced a multiplier effect to boost the economy.

“And the key to this is that investments we bring in are measured in the motivating effect on other local enterprises besides seeing that their impact will ripple through the local communities,” he said.

As more arrivals are expected into Sabah, the State Government is confident that there would be sufficient rooms with at least 11 new hotels being planned or built and to be completed in the next few years with additional 3,500 rooms.

In addition to Holiday Inn Express, Hyatt Centric and Alila Resort will also be completed this year.