Thursday, February 2
You are at:Home»News»Sarawak»What About Kuching returns with exciting activities throughout October
For the freshest news, join The Borneo Post's Telegram Channel and The Borneo Post on Newswav. 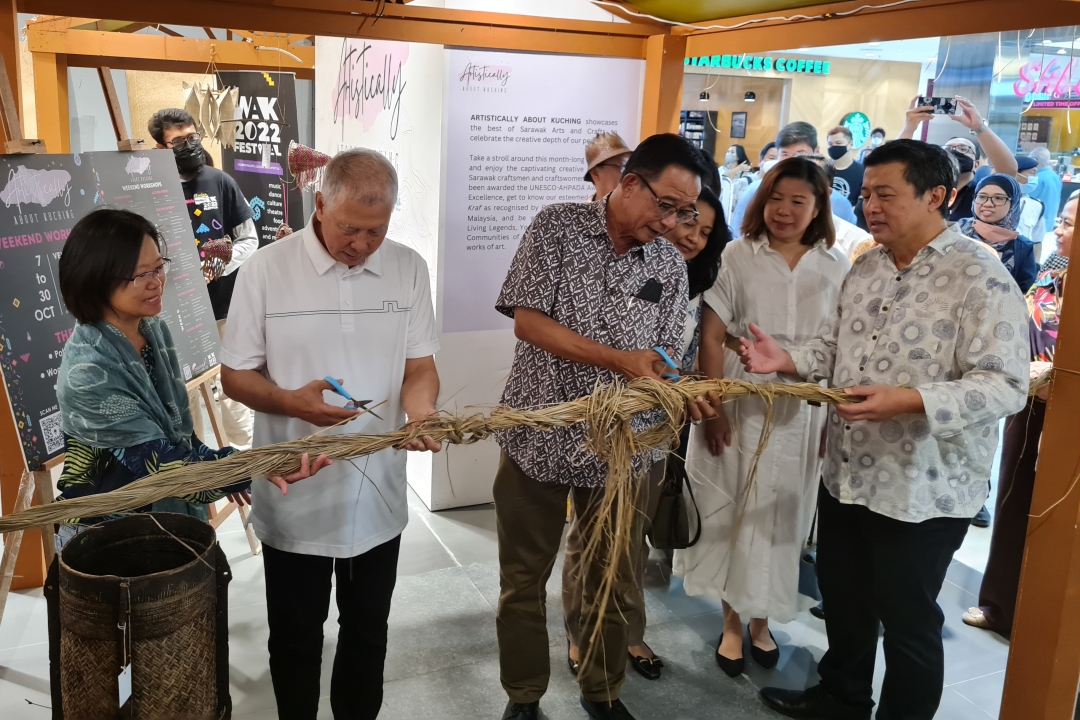 Abdul Karim (third left) and Ting perform the ‘rattan-cutting’ ceremony to mark the official launch of the ‘Artistically About Kuching’ exhibition.

KUCHING (Oct 1): The much-anticipated month-long What About Kuching (WAK) Festival kicked off today with the launch of two component programmes: ‘Artistically About Kuching’ and ‘SproutFest’.

The festival returned after a two-year hiatus due to the Covid-19 pandemic.

Regarding WAK as ‘a multi-genre umbrella festival’, the minister said the celebration had already begun before the official launch when his team announced its staging and then the ‘Calendar Reveal’.

“From today onwards, the arts, culture and lifestyle lovers will be treated to a month of exciting events being put on by many creative artisans from Kuching and beyond.

According to him, ‘Artistically About Kuching’ is a part of the efforts to recognise the contributions from the creative community in Sarawak, with individuals being awarded with accolades from local and international organisations like Unesco, World Crafts Council, Asean Handicrafts Promotion and Development Association, and Malaysian Handicraft Development Corporation.

“Moreover with Kuching having been recognised as a World Crafts City by the World Crafts Council, public-private partnership is important in nurturing, developing and promoting many of the state’s art forms.

“This must apply to our cultural and traditional, as well as the contemporary and modern movements by established and burgeoning young talents.”

Abdul Karim said as a lover of arts and culture, he was truly proud of the state’s rich cultural heritage being beautifully showcased at the Borneo Cultures Museum.

“I sincerely hope that the fabulous craftsmanship techniques applied onto the prized antique pieces we see at this museum have been preserved and are manifested in the arts and crafts we see in the marketplace today.”

The ‘Artistically About Kuching’ exhibition is open to the public until Oct 31, from 11am to 8pm daily, occupying an area inside the mall near to the main entrance.

Various workshops and talks conducted by Living Legends or ‘Adiguru Kraft’ would be conducted.

On ‘SproutFest’, Abdul Karim said the programme was specifically targeting the burgeoning gardening community in the city, with the hobby having garnered great interests among Kuchingites since the Covid-19 pandemic struck.

“Over the past several years, our garden nurseries and shops around the city have been filled with keen home gardeners and even now after the restriction order was lifted, their business has remained brisk,” he said.

The minister said the visitors to ‘SproutFest’ could expect a showcase of all things pertaining to gardening, including an exhibition and sales of plants, farm-to-table food vendors and talks on gardening.

Taking place over two weekends (Oct 1-2 and from Oct 29-30), ‘SproutFest’ is occupying the second floor of the shopping mall.