Wednesday, December 7
You are at:Home»Columns»Between The Lines»YES MINISTER! Let’s battle corruption beyond rhetoric 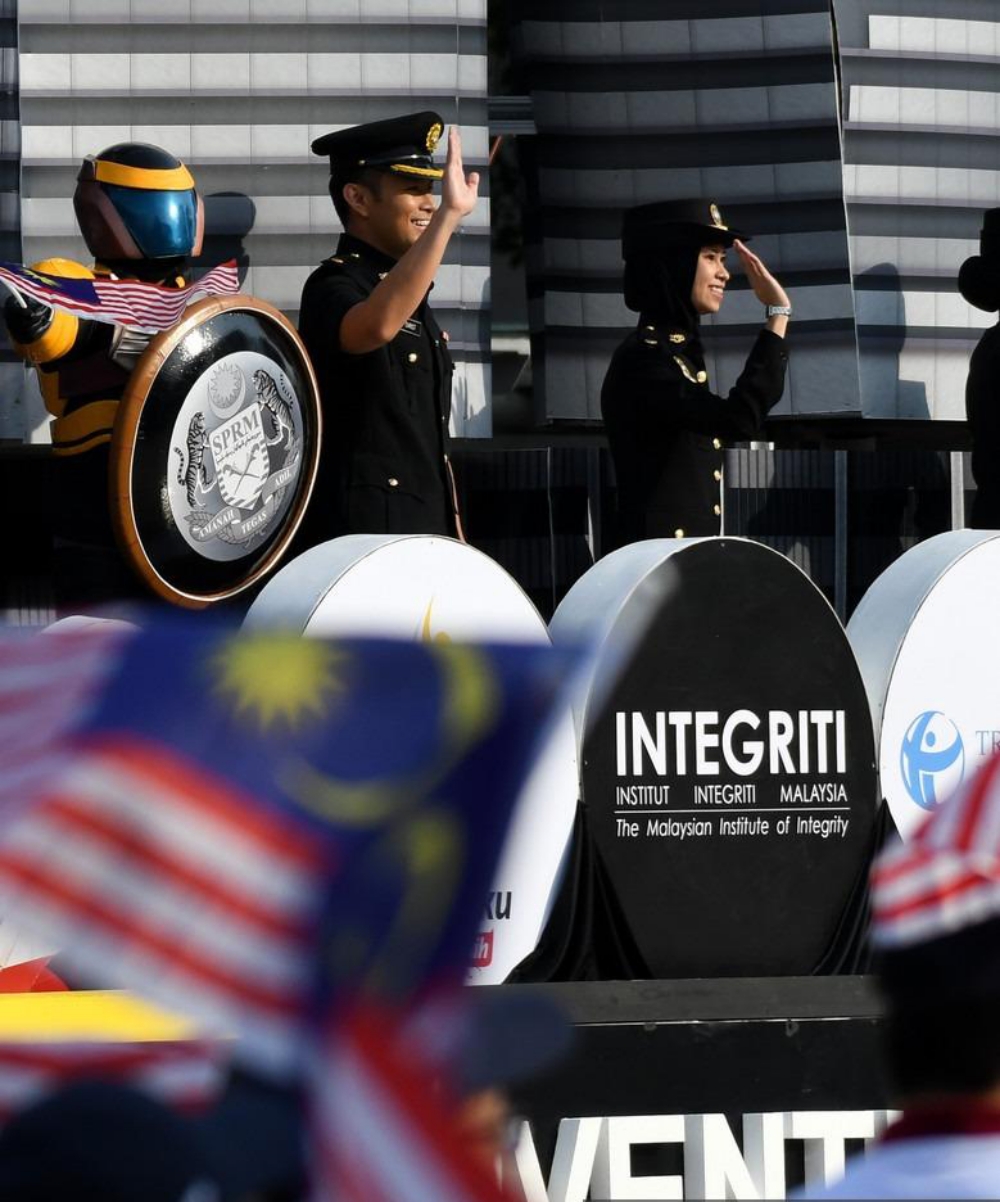 The fight against corruption is a life-long and all-encompassing crusade that brings into action the critical need to address power relations, administrative systems and concomitant processes and components, cultural values and morality, socio-economic disparity, remunerative and reward systems, and a slew of other factors and hypotheses that vary with social contexts. — Bernama photo

You spoke so resolutely with such high moral octane on the importance of maintaining ‘clean hearts and clean minds’ when dealing with public funds and exercising power of public office in the course of duty.

You stood firm on your moral compass when you declared unequivocally that abuse of power, greed, and corruption are heinous sins that will inevitably condemn the perpetrators to hell’s raging fire. You would not hesitate to chastise your office colleagues who were allegedly making early moves to engage in corrupt practices. You are unwavering in your faith, steadfast in your moral values and unrelenting in your silent crusade.

Yes, Minister. The desire for self-gratification through wealth acquisition and accumulation, as well as submitting to the temptation of money through fraudulent and unseen deceptive tactics, has become an increasingly destructive phenomenon in our society.

The temptations for the meek in faith can be overbearing even as they ride on high opportunism after ascending to positions of power. The advantages are numerous and diverse. Many of the wealthy and powerful would take that familiar road of ‘greed and corruption,’ often oblivious to the scrutiny of the astute observer. It is the road where angels fear to tread.

Yes, Minister. You have been consistent in your message of unity and moral uprightness, as well as consistent with messages of high moral calling, founded on the strong values of your religious affiliation. Many of your peers in the corridor of power would gladly endorse and incorporate your crisp messages into their political or public statements.

Joining the chorus would undoubtedly improve their image and perceived credibility, as well as increase media space and columns.

But will they go beyond the familiar rhetoric and offer themselves as solutions to real corruption problems in areas under their jurisdiction?

Yes, Minister. Statements and policy pronouncements alone will not change the situation or eliminate corruption and abuse of power. We’re never short on rhetoric. However, we fall far short of a serious and long-term commitment to addressing the root causes of the problem rather than just treating the symptoms.

Leaders of political parties and non-governmental organisations must set an example by living up to the rhetoric. The solution to the problems starts with them.

Greed that breeds corruption is an almost unstoppable social virus that has spread over the years and become an embedded constituent element of our social matrix and a silent definer of our social psyche. There is no antidote, unlike what has been developed to combat previous pandemic viruses. The antidote is in the human being himself: his fear of God, as well as his willingness and commitment to change.

Yes, Minister. As you have correctly stated to the scribe, the fight against corruption is a life-long and all-encompassing crusade that brings into action the critical need to address power relations, administrative systems and concomitant processes and components, cultural values and morality, socio-economic disparity, remunerative and reward systems, and a slew of other factors and hypotheses that vary with social contexts.

Greed is the only vice that leads people to break the rules of law and fairness, according to Aristotle’s treatises on ethics (Shklar, 1990). Dante suggests in his classic, ‘Divine Comedy’, that greed and corruption are inextricably-linked evil virtues of ruling elites.

It does, however, highlight a potentially vicious circle, with greed undermining social structures and leading to a condition of instability resulting from a breakdown of standards and values or from a lack of purpose or ideals. It is a deadly social virus known since time immemorial to have conveniently earned a place in the social-psychological fabric of our society.

Greed, paradoxically, has become a constituent definer of our psyche.

The old vice remains behind its modern mask and greed is a universal human trait and a near-defining characteristic of a human being.

But knowing it is evil and an extended satanic force does not mean we can choose to be apathetic and allow ourselves, our community, and our leaders to fall from grace.

How much do we really need to live a relatively comfortable life?

How much excessive needs do we require, even as we journey through the sunset years and prepare for a meaningful exit to the next life and leave all the riches behind?

The famous quote by Mahatma Gandhi that ‘there are enough resources to meet human needs but not enough to satisfy human greed’, has never been more true.

Many political leaders around the world have wrecked the financial system, destroyed the value of money, which is the foundation of a capitalist society, and caused innumerable conflicts that have displaced millions and generated hatred in their pursuit of money.

Some things must be changed.

Yes, Minister. Your near-theological explanation sheds light on the fallacy of many people in positions of power on their insatiable material pursuit, as if nothing else matters and death is not of this world. You detest, you abhor such attitudinal behaviour.

The fortress of faith must not be vanquished by the temptation of power.

On this, Mr Minister, I am on the same page with you.

Morality and the power of the moral community or moral order over the behaviour of its members have been central elements in the control of greed in human associations, especially relating to power relations, social interactions, bureaucratic or business transactions.

To act on moral judgement implies that our actions are not determined by natural imperatives or irresistible impulses, but rather by will and freedom.

Notwithstanding, although morality has a broad meaning that associates it with liberty, it also carries connotations that shape and direct will and liberty in a specific way.

Yes, Minister. It is widely held that greed keeps corruption alive. Under conditions of low descriptive corruption norms, the pattern would fade. As emphatically mentioned by the Sultan of Perak Nazrin Muizzuddin Shah, corruption is a social disease borne of greed and hardship.

Citing data from the New Economic Model Report which showed that 80 per cent of Malaysian households earned less than RM5,000 a month, the Sultan said the unequal distribution of wealth and widening income gaps had bred a culture of petty corruption.

Corruption leads to unsustainable development, environmental pollution, unequal and inequitable wealth distribution, and resource leakage. Many countries are blessed by God with various sources of wealth, but due to corruption, some are trapped and locked into backwardness, underdevelopment, and poverty.

The Sultan chooses to be bold and open on the issue of corruption. The enforcement agencies at the federal and state level must take heed of the royal pointers. Mention of corruption offences driven by greed and usually committed by those who occupy high-ranking positions, or desired lavish lifestyles rings a familiar note to keen observers and critics of contemporary issues.

You’ll agree, Minister, Sir, that offenders in this category are slick and sophisticated, adept at absolving themselves of any wrongdoing, difficult to prosecute, and have ties to the powerful.
Perhaps, we should take the wise sage’s advice and remember that ‘it takes a thief to catch a thief’.

While I have highlighted three key words that have an interlocking relationship, namely greed, abuse of power, and corruption, the word ‘hypocrisy,’ which was mentioned by the Sultan of Perak as a definer of the Malay corruption matrix, has been added to complete the framework for a good critique on corruption.

Hypocrisy may well be the subject of the next commentary.