Saturday, December 3
You are at:Home»Features»More than just good looks 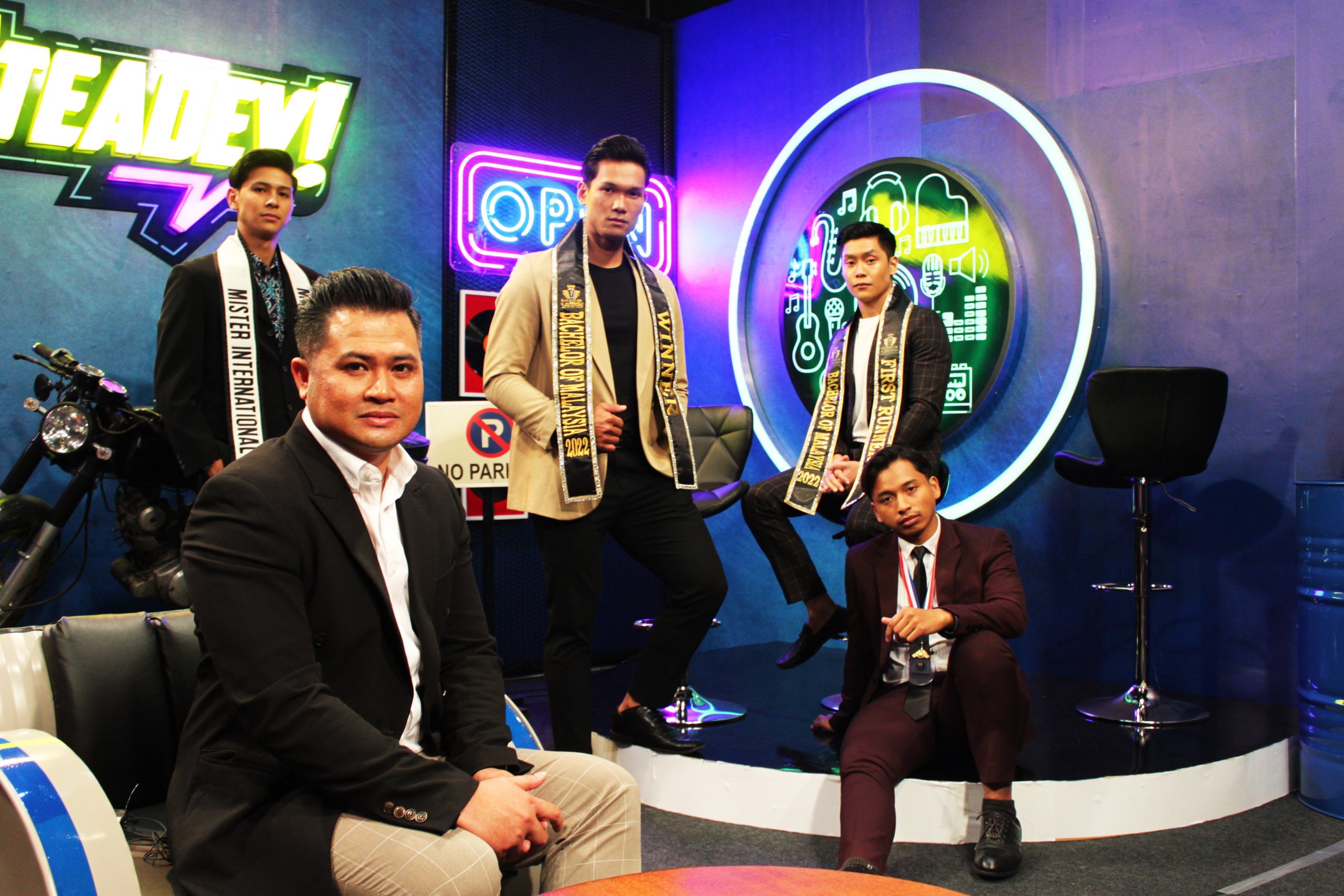 Ezrie, with the BOM 2022 top finalists: (back, from left) Roger, Abdul Rahman, Liaw and Haziq.

IT was somewhat a self-conscious experience tagging along a group of good-looking young men as heads would turn whenever they walked past a crowd.

Although knowing full well that the attention was never meant for me, it did leave me wondering what it really felt like for these guys. 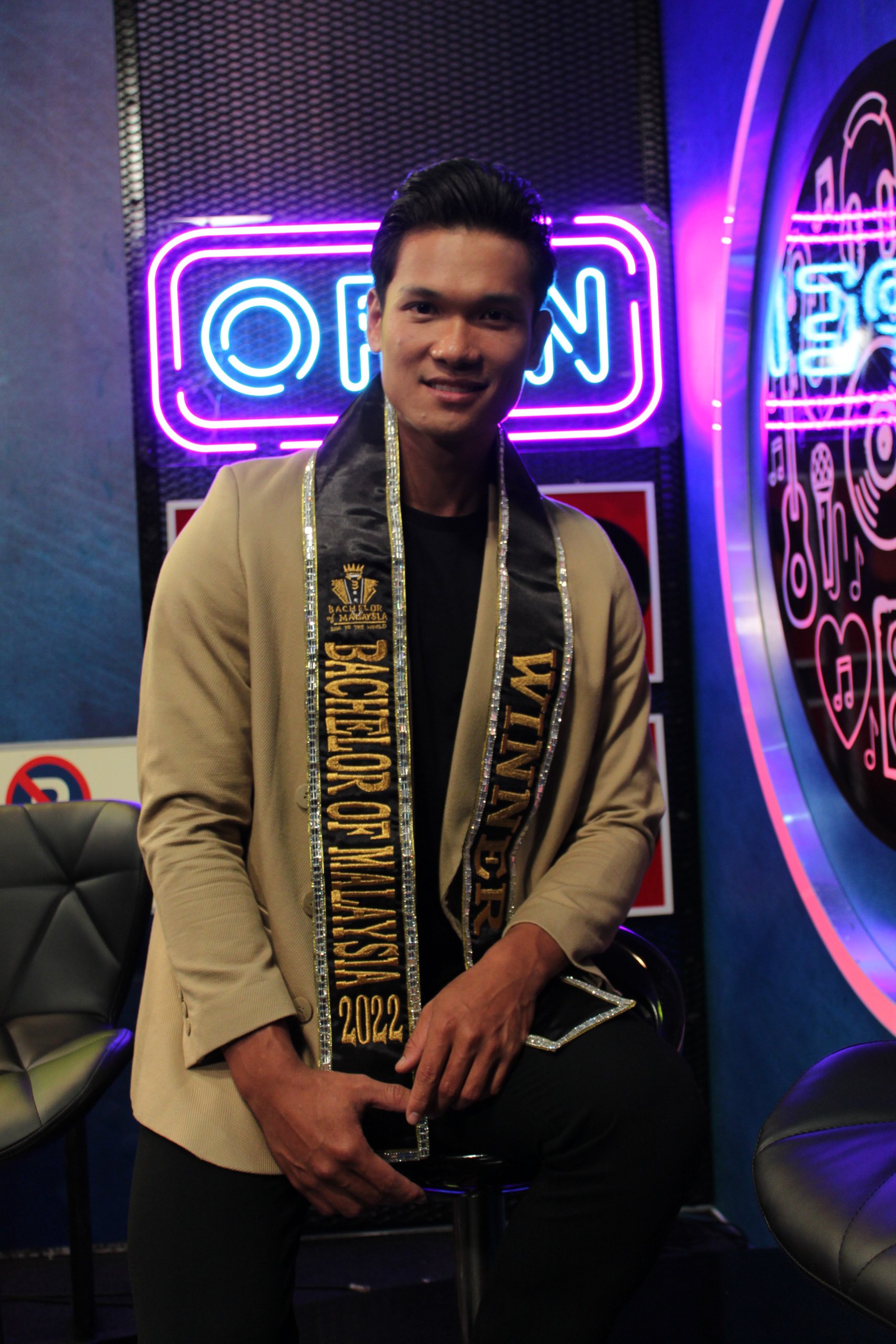 Abdul Rahman is a final-year university student undertaking a Degree in Aerospace Engineering.

“It still needs some getting used to,” laughed Abdul Rahman Lee, the winner of this year’s ‘Bachelor of Malaysia’ (BOM) competition who, together with his fellow finalists, took part in a post-event media tour in Kuching recently.

The group was led by Apohrozy Ezrie, the founder and president of BOM – one of the country’s well-established male pageant organisations.

Bintulu-born Abdul Rahman, 24, was picked for the crown among 16 young men from all over Malaysia who made it to the grand finale, staged on UCSI Hotel Kuching recently.

The respective first and second runners-up are Jonathan Liaw, a 22-year-old freelance trainer from Sabah, and Kirtan Raj Gunarajah, 27, a fitness consultant and content creator from Selangor.

Another Sabahan, Roger Hugo Amandus, a 21-year-old model from Papar, is the appointed Mr International Malaysia 2022 – making him the country’s ambassador to the 14th Mr International to be held in the Philippines from Oct 20 to 30.

Another finalist Darren Lam, a 30-year-old music director from Selangor, is currently vying for the top spot in Mr World Malaysia 2022.

The organiser has also informed that Abdul Rahman, Liaw and Kirtan will definitely represent Malaysia in the upcoming Mr Global, Mr Tourism World and Man of the World competitions.

According to Ezrie, however, the BOM board has yet to decide who will go to which pageant. 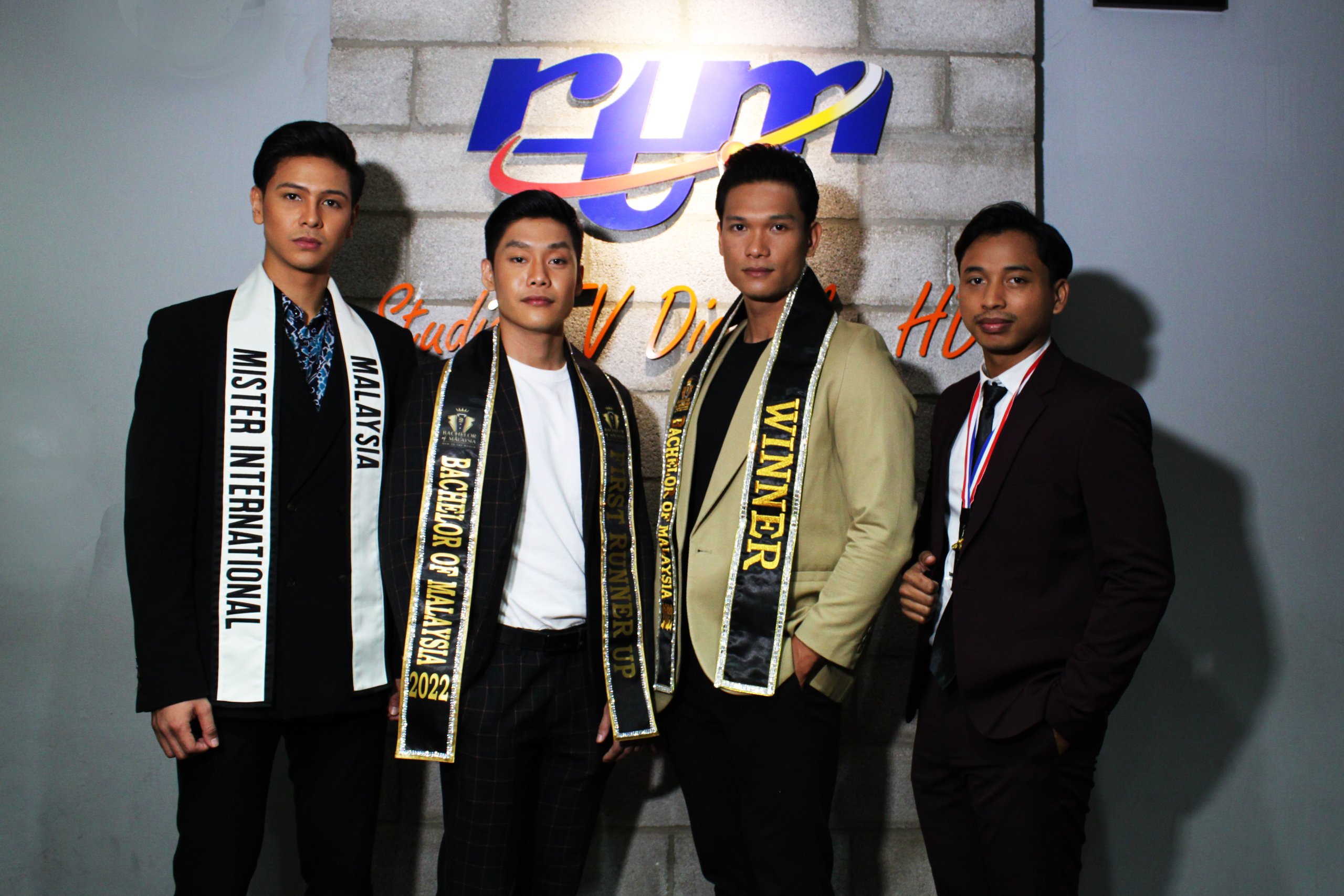 (From left) Roger, Liaw, Abdul Rahman and Haziq in a photo-call prior to attending a television talk show at RTM Kuching.

Though not as highly recognisable as the long-established events for women such as Miss World and Miss Universe yet, male pageants are now a growing phenomenon worldwide with countries like Venezuela, Puerto Rico, Canada, India, the Philippines, Vietnam, Thailand, Singapore and Indonesia having fared very well in various editions.

Malaysia, over the past several years, has begun to rise towards becoming a powerhouse with many contestants winning the top and other key titles in international competitions.

Interestingly, as I researched for past news online, I discovered that many sources had credited a beauty queen as being instrumental in laying the foundation for the organisation of international male pageants.

Also while doing research, my memory flashed back to the early 1990s when I was still in junior secondary class. I remembered a contest called ‘Hero Remaja’ (Teen Hero), run by a very popular teen magazine in Malaysia.

The process was very ‘old-school’ – applicants would mail in their close-up photos and biodata to be listed on the special ‘Hero of the Month’ segment, where there was also a small cut-out form for readers to write their pick for the next issue.

The magazine was a bi-monthly publication, so the ‘hunks list’ would be out in the first half-month issue, and the ‘Hero’ spread the next.

Then at the end of the year, a poll would be conducted among the readers to decide the title winner among the 12 finalists.

I believed that the contest might have started out as a marketing idea, which later snowballed into a huge success and eventually, cemented the magazine’s status as Malaysia’s most popular commercial publication for young adults back then.

Hero Remaja still exists to this day, although I am quite sure that the physical magazine is no longer in circulation.

The competition has since evolved to become one of the major male pageants in Malaysia, with the 2021 edition being adapted into reality television.

I would never dismiss it as being superficial because many of the Hero Remaja alumni have since gone on to become highly recognisable personalities in many fields, most notably show business and the corporate world.

From contestant to manager 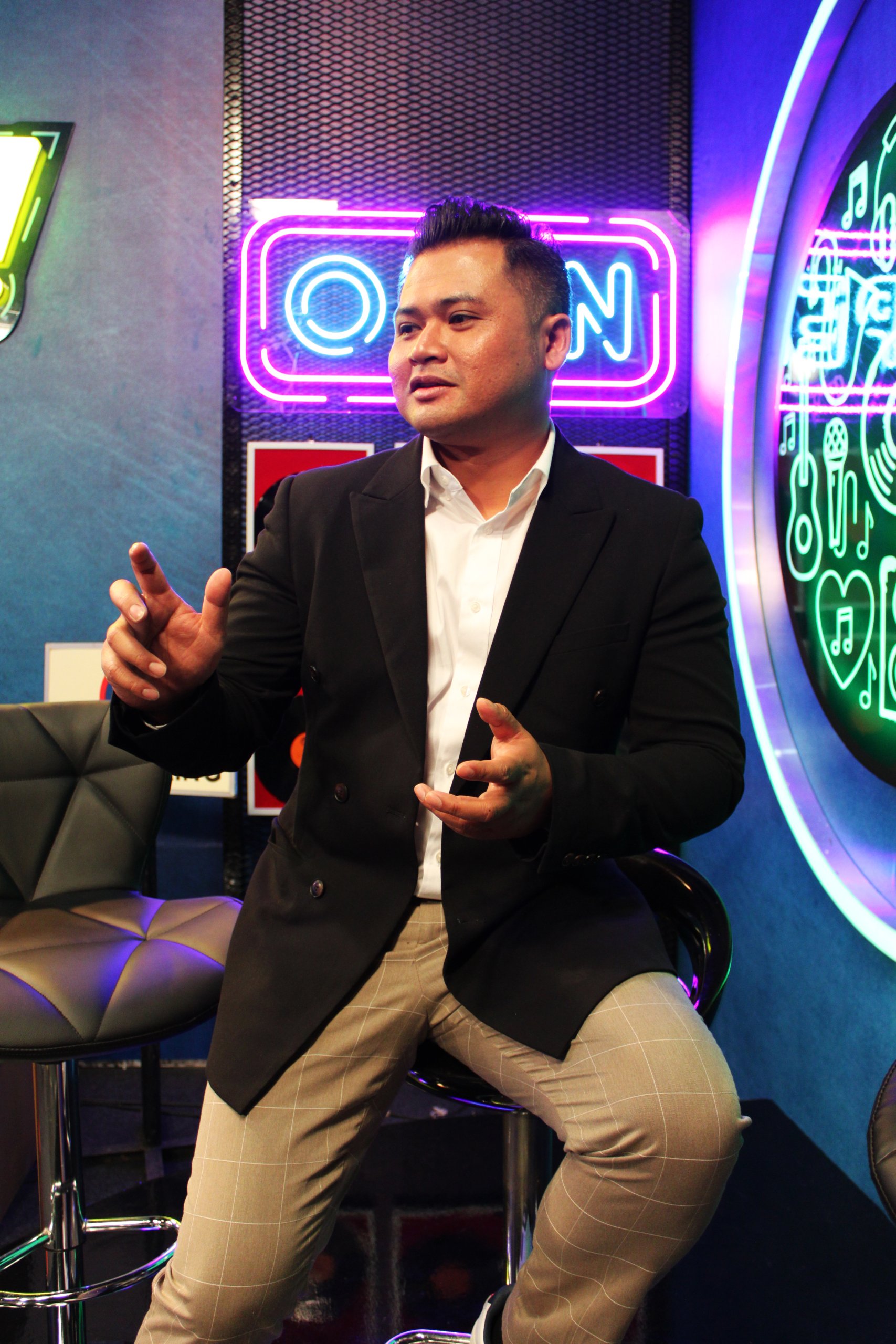 Ezrie is a former male pageant winner himself.

Despite the rising visibility, the organisation of many male pageants is still lumped together with that of female pageants, especially if the latter are more established in terms of attracting sponsorships.

Ezrie, 40, knew the situation full well, having been a contestant himself in the past.

He won his first competition, Mr Malaysia Borneo Cultural Festival held in Kuala Lumpur in 2014, and the year after that, he placed first runner-up in the Borneo Model Search held in Bintulu.

Mr United Continents 2015, staged in Manila, the Philippines, was his first international experience where he fared quite well, making it to the Top 6 list and also taking home the ‘Best National Costume Award’.

Ezrie stopped competing after that, but continued to be involved in the pageant industry as a trainer, consultant and judge.

It was during this time when he was already mulling the setting-up of an entity dedicated to managing talents from Sarawak and Sabah.

“Taking my experience into account, it was difficult for contestants from Borneo to take part in male pageants which, at the time, always took place in the peninsula. We had to travel there to compete, managing everything on our own.

“It was very obvious how difficult it was when I went to the Manila outing in 2015, where I arranged almost everything myself. The national director only provided my national costume – the rest: flights, training, wardrobe, all were covered by me.

“In comparison, a fellow finalist had everything well-organised for him, down to the different outfits for him to wear on different days throughout pageant week!”

That experience seemed to seal the deal for Ezrie, that a male pageant talent management dedicated to Sabah and Sarawak must be established.

He and fellow contestants at the time, who included Geo Allen George – now the national director for BOM – sat down together to talk about it.

That simple discussion led to the setting-up of Mister Borneo Malaysia Organisation in 2015 initially to identify and introduce talents from Borneo.

In mid-2016, it was rebranded to BOM and later in 2017, it staged its first competition in Sibu, in conjunction with Visit Sibu Year Festival.

Not without its challenges 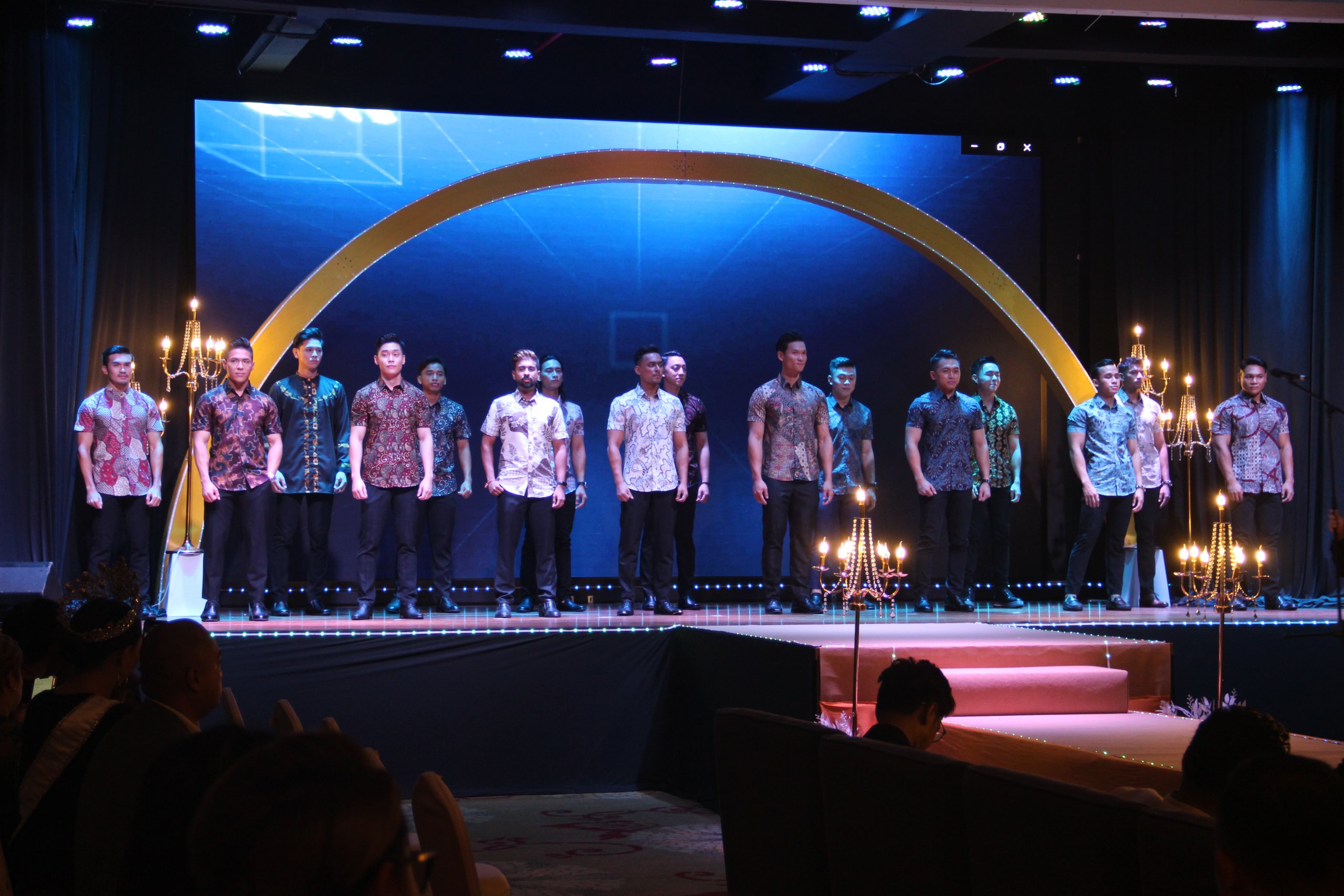 Photo taken during BOM 2022 grand finale shows the finalists showcasing exclusive batik shirts during one of the segments.

Since then, the BOM has established itself as a major male pageant management organisation and over the years, it has produced several talents who have excelled in and outside of the pageant world. 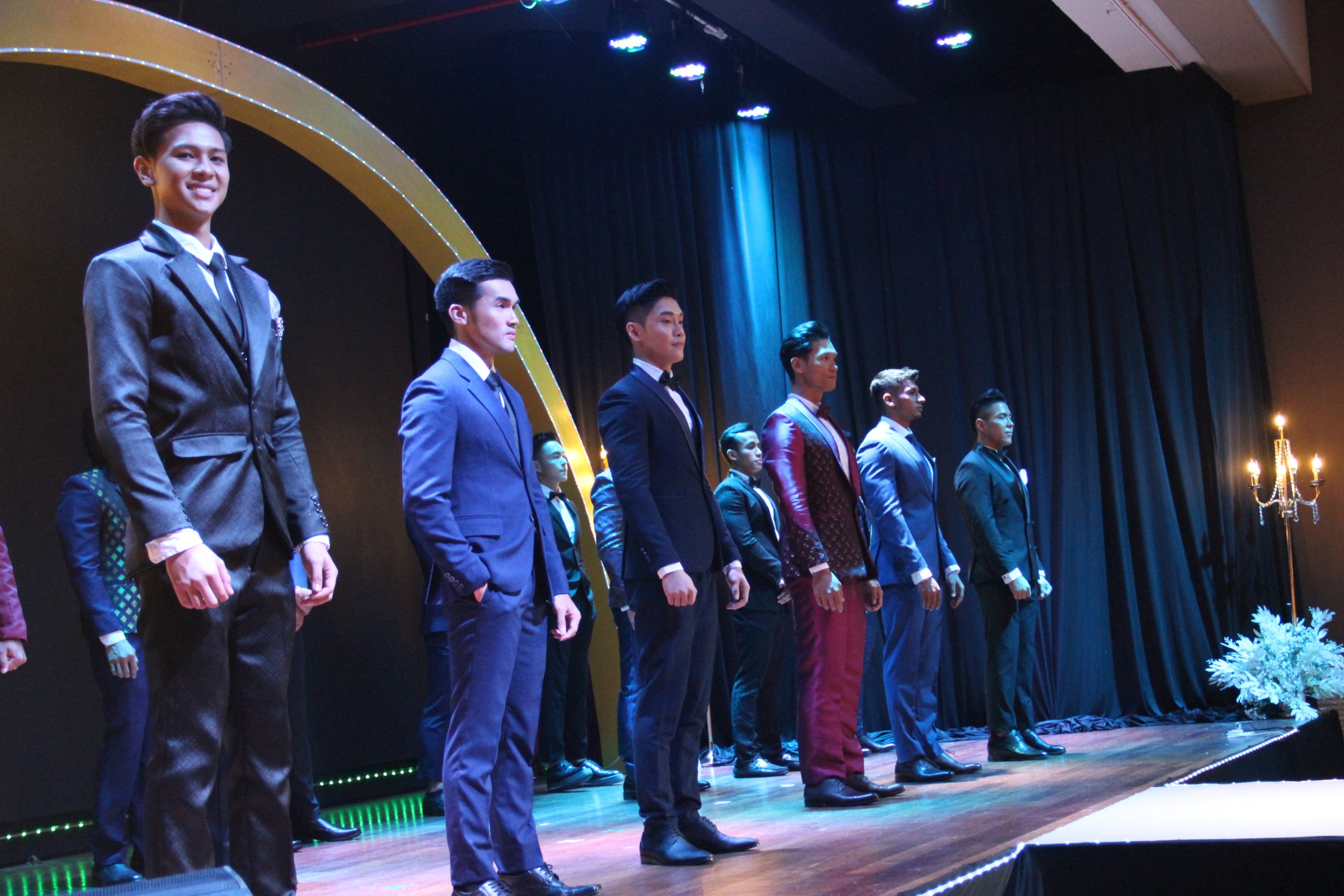 The Top 6 contestants of BOM 2022 during the formal-wear segment. They are (from left) Roger, Jayden Tian from Penang, Liaw, Abdul Rahman, Kirtan and Johnny Bong from Kuching.

“Our objective remains – to be the best male pageant manager, and along the way, I have found out that this platform can actually help bring out the best in many young men and often, they never expected it themselves.

“I remember one of our first-batch contestants, Mohd Asyraf, who was so shy and could barely speak a word of English. Now, he is a cabin crew member of Qatar Airlines, one of the world’s best full-service carriers.

“And there’s Adrian Edy, a past BOM’s Mr Icon winner, who is now a social and humanitarian activist, very active in doing welfare activities in Sabah.

“I would say BOM’s ‘golden batch’ came in 2019, where all the Top 5 boys performed very well in their respective international competitions, led by Danial Hansen who clinched the Mr Tourism World crown at the finale in Malta.

“You see, BOM helps ‘open them up’, even those who were not the top contestants. It is a platform that not only grooms their appearance, but also enhances their self-esteem and allows them to highlight their cause advocacy.

“Also, we are a brotherhood – a fraternity, if you will. Many have become BOM’s partners and thus, further solidify our support system,” said Ezrie.

However, he also acknowledged that handling a growing entity like the BOM came with its own challenges.

“Male pageants are a growing phenomenon, but many times when we seek sponsorships, there are those who still don’t quite get what we do. My simple explanation would be: ‘You know Miss Universe? That’s us, but the male version,” he quipped.

Ezrie also regarded the first competition in 2017 as being ‘really difficult’.

“We did casting all over Malaysia, but just a handful of people turned up for the audition.

“The perception was very different then; lots of scepticisms.”

Elaborating on the scepticisms, Ezrie said one of them was about no continuation after the event, which occurred prevalently in both female and male pageants.

“Let me be straight – pageants are business, and in business, you cannot let things run on their own. It’s just not right to leave the contestants ‘hanging’ after a competition; it cannot be the ‘event’s done-that’s it’ situation – we don’t want that.

“For BOM, we strive to be their ‘torchlight’ – to show them that if you’re interested in going this way, then we’ll guide and support you.

“Within one year, they would already know which direction that they want and following our guidance, they feel equipped and ready to set out for it.

“This is not blowing our own trumpet; many of our contestants have accomplished many things and many have become a part of the BOM family,” he said. Liaw describes those in the male pageant industry as ‘a great community’.

Liaw could not agree more with Ezrie’s remark about ‘the BOM family’.

He said the 2022 edition was his first participation in any male pageant, but he immediately felt the strong bond between all those involved.

“It’s a great community. Yes, I was competing, but it was within an experience where everybody supported each other,” said the Sabahan.

For Abdul Rahman, he was struck by the ‘beauty of every contestant’ and loved seeing their confidence.

“The most challenging part was getting over my anxiety and nervousness being in a crowd, especially when I had to do public speaking, but having said that, being a contestant had definitely helped me overcome such challenge,” said the former national athlete who, like Liaw, also made his male pageant debut in BOM 2022. 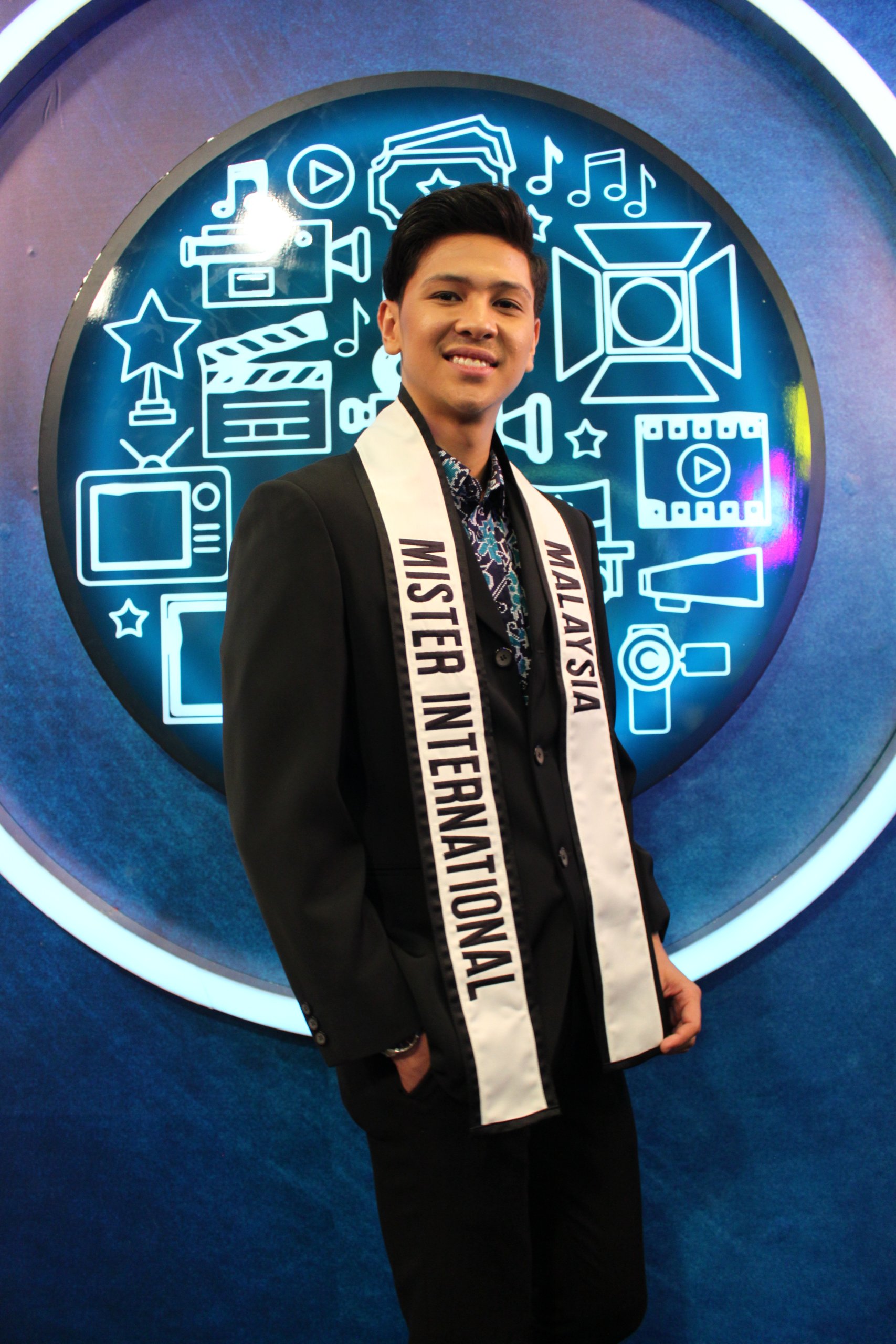 Roger is all excited about being the country’s ambassador to the upcoming world finale of Mr International 2022 in the Philippines.

Roger, on the other hand, was ‘more seasoned’ than the two – he had competed in four male pageants before joining BOM 2022.

“However, BOM seems to open up more modelling opportunities for me, but what’s more exciting is that I have been appointed as Mr International Malaysia and for that, my focus now is to make preparations for the world finale in the Philippines,” said Roger, who stands 186cm tall. 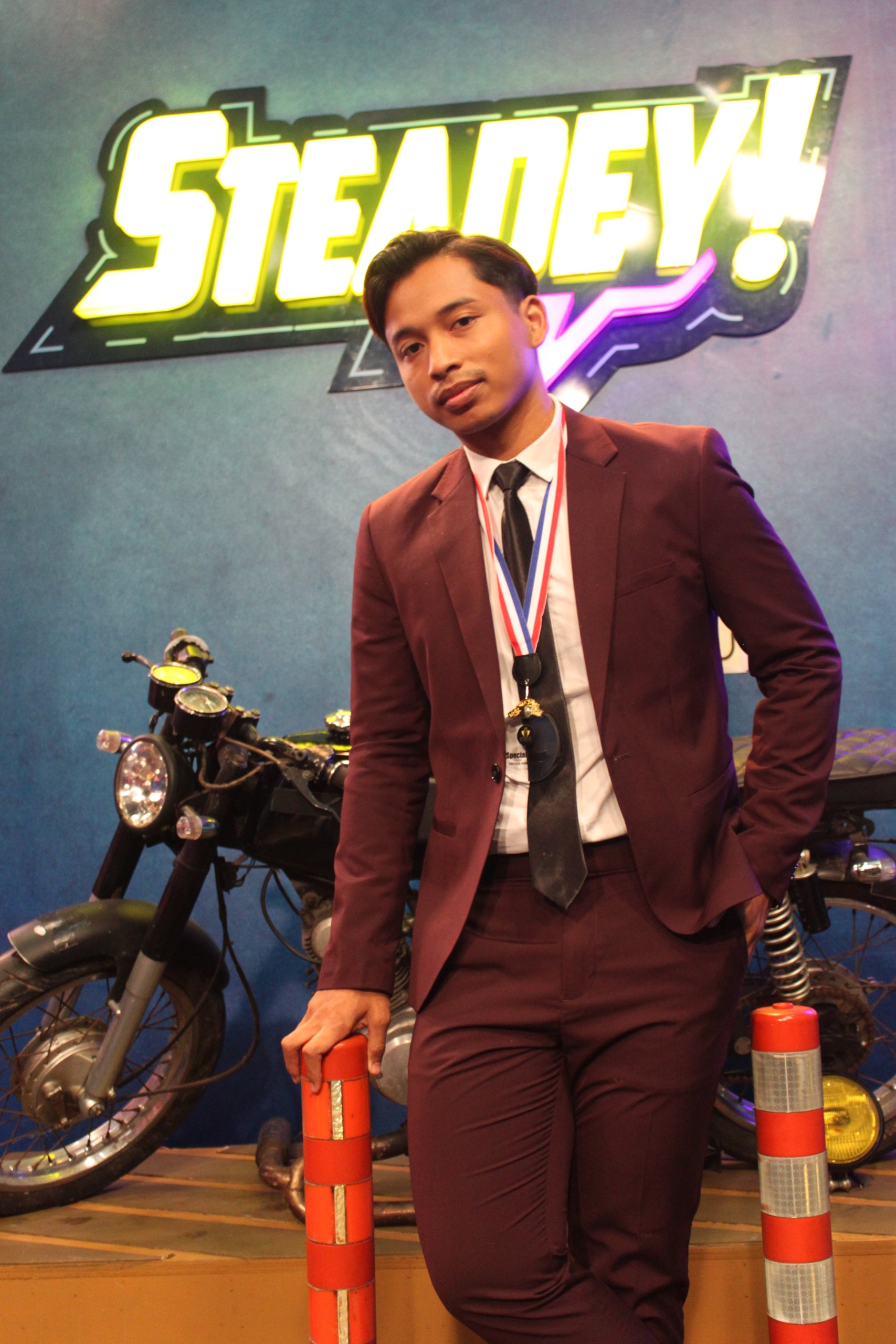 Like Roger, the 23-year-old Kuchingite had entered a couple competitions before.

“I like how the organiser keeps in touch with us and lets us know of any job that would suit our interest,” said Haziq, who is currently the manager of a local food and beverage outlet.

Ezrie said his team had already started planning for BOM 2023, adding that the hosting city might either be Kuching again, or Kuala Lumpur.

“But if we were to do it in Kuala Lumpur, it would somewhat beat the original intention of BOM – to focus on talents from Borneo and to bring the talents from Peninsular Malaysia to here.

“We’re still considering. We loved it that the Kuching crowd had been so supportive towards BOM 2022 – even many past winners wanted it to be hosted in Kuching again.

“We’ll see. Right now, the attention is on preparing our top contestants for this year to do their best in the upcoming international competitions,” he said.

Previous ArticleWhat’s mine is mine, what’s yours is also mine!
Next Article What kind of humans are we raising?