Wednesday, February 8
You are at:Home»News»Sarawak»Minister expects Miri Country Music Festival 2022 to be another big crowd puller
For the freshest news, join The Borneo Post's Telegram Channel and The Borneo Post on Newswav. 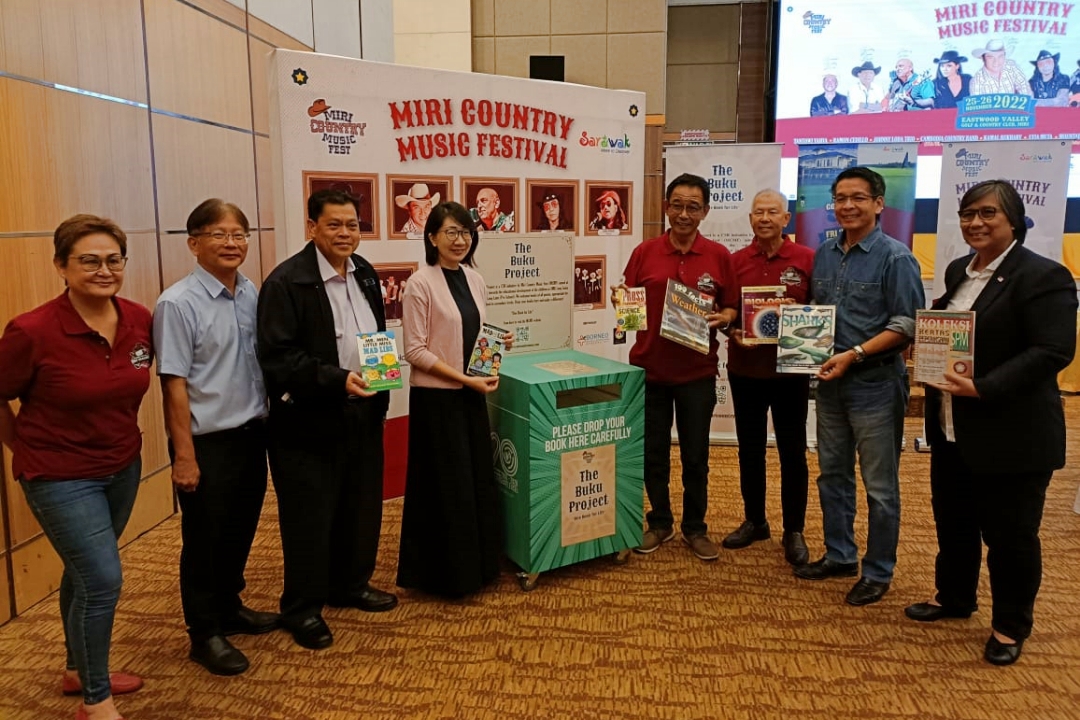 Gracie (left), Abdul Karim (fourth right), Ting (third right) and others at the launch of the MCMF Golf Tournament 2022 and Buku Project to promote the upcoming music festival.

Response to all the three music festivals held in Sarawak this year exceeded expectations and the state is looking at music festivals as a boon to its tourism industry through tourism receipts from international visitors.

After a hiatus due to Covid-19 pandemic, MCMF is back in Miri on November 25 to 26 this year and will be held at Eastwood Golf and Country Club, an event which the minister believed can draw a much bigger crowd than the 2,000 targeted by the organiser.

“Ever since our borders reopened this year, our music festivals -two in Kuching and one in Sibu – the crowd either doubled or tripled the targeted number and I believe it will be much bigger also for Miri,” he said in a press conference here today.

The minster was in Miri to launch the MCMF Golf Tournament 2022 and Buku Project of the club in a ceremony that was also attended by his deputy Datuk Sebastian Ting, Sarawak Tourism Board chairman Dennis Ngau, Miri Resident Abdul Aziz Mohd Yusuf, MCMC founder Gracie Geikie and others.

The golf tournament which promises grand prizes and a fun time for golfers to play a round of golf during the day will provide them with the opportunity to unwind and dance to country music at the MCMF in the evening.

The minister said MCMF has attracted festival goers from all walks of life, ranging from expats working in Miri, Bintulu, Brunei, Sabah, visitors from neighbouring countries such as Singapore, Brunei, Australia to locals from Sabah, Miri, Kuching, Bintulu and even country music enthusiasts all the way from Lawas and Bario.

“Everyone, including the City Hall and hotels, should help promote this event and make the visitors flocking to their premises feel welcomed as the spin-offs would benefit the local community,” he said.

Founder of the festival, Gracie Geikie, highlighted the importance of education which can be supported through music festivals.

“MCMF’s CSR initiative, ‘The Buku Project’ with the theme ‘One Book for Life’, will be a collaboration with Knewton Global Schools Miri, an international school here.

“The collection of pre-loved books will be collected from members of the public, festival-goers and also MCMF performers to be sorted and sent to two rural schools at Long Lama and Long Latei after the festival,” she said.

The organiser will also be curating music workshops by MCMF performers for the students of Knewton and also team up with James Cook University and Curtin University to carry out event research during MCMF.

The festival will feature Indonesia’s most popular country singer Tantowi Yahya, who has produced 10 albums with combined sales of over three million copies.

Malaysia’s international multi award-winning singer, songwriter and visual artist Lyia Meta is expected to shine at this festival. She was voted Female Vocalist of the Year and Virtual Entertainer of the Year at the Texas Sounds International Country Music Awards last year and won the World Music Artist Of The Year at the Josie Music Awards in Tennessee, USA in 2018.

The Johnny Loda Trio (Italy/United Kingdom/Thailand) will be another highlight as Johnny Loda is considered one of the best rockabilly guitar players in Italy while golden-voice Clay George will lead the Cambodia Country Band (USA/Cambodia), a five-piece band of honky-tonk heroes comprising guitar-picker Joe Wrigley, Steve Sutcliffe on fiddle, Dave Z on bass and musical legend of Phnom Penh, Oscar, on the drums.

Bringing a feel of Nashville to Miri festival, renowned Ramon Cedillo of Singapore will be entertaining the crowd with his distinctive style of bluesy timbre voice and country twang.