Monday, January 30
You are at:Home»Features»Threading different cultures together with beads
For the freshest news, join The Borneo Post's Telegram Channel and The Borneo Post on Newswav. 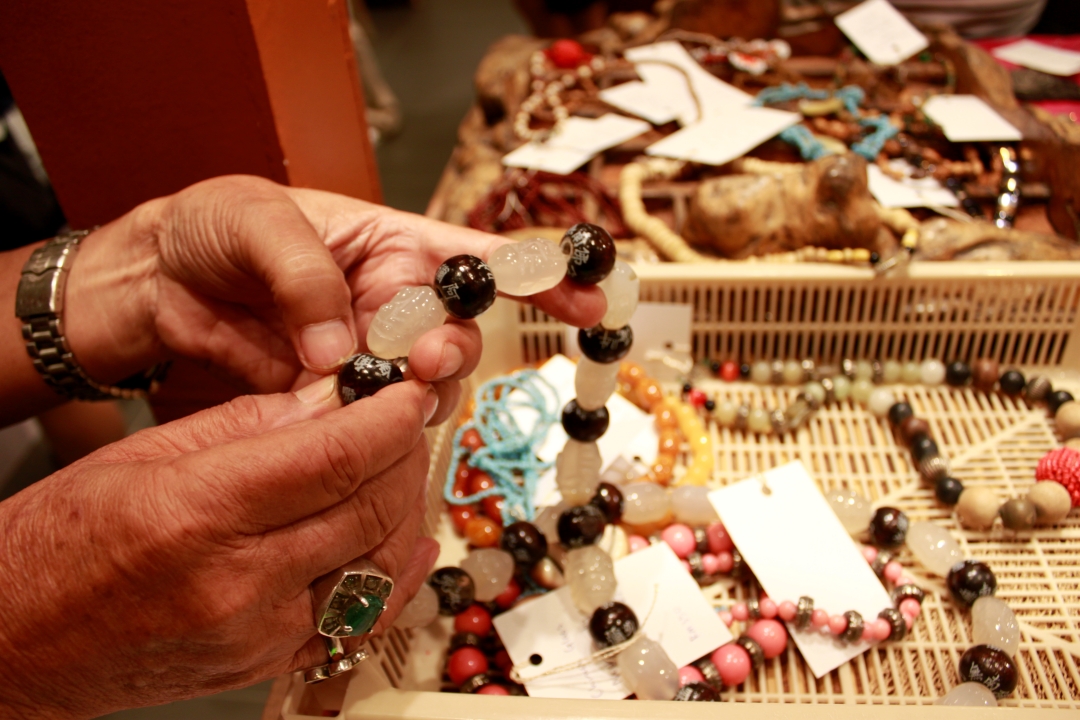 Photo shows a necklace that has a combination of stone and crystal beads.

UPON receiving a WhatsApp text from Heidi Munan last week, inviting me to a talk on beads that she would be presenting at the Spring Mall Kuching, I thought it would be something interesting and simply replied: “I would love to come.”

To that, she messaged back: “Bring your best beads! We’ll discuss participants’ own beads too!”

Having not even one item made from beads, I wrote back: “Don’t own any, Madam. I just listen to your talk, lah,” which I punctuated with a ‘smiley face’.

Heidi then responded with a ‘thumbs-up’ emoji.

Fast-forward to the day of the talk on ‘All About Beads’, I was unfashionably late for the session.

As I was heading to the ‘Artistically About Kuching’ exhibition, next to the Michael Kors store on the mall’s ground floor, I could already hear Heidi’s voice faintly echoing from inside.

“Everyone has beads. Beads have been around for 2,000, 3,000 (years), and they still are. All the different cultures are using beads,” were parts of her introduction that I managed to catch once I arrived.

I struggled, quietly, to get the camera out of my backpack and after getting everything ready, I looked up to a sight of Heidi smiling at me for a few seconds before continuing with her talk.

‘Beyond trends and fashion’ 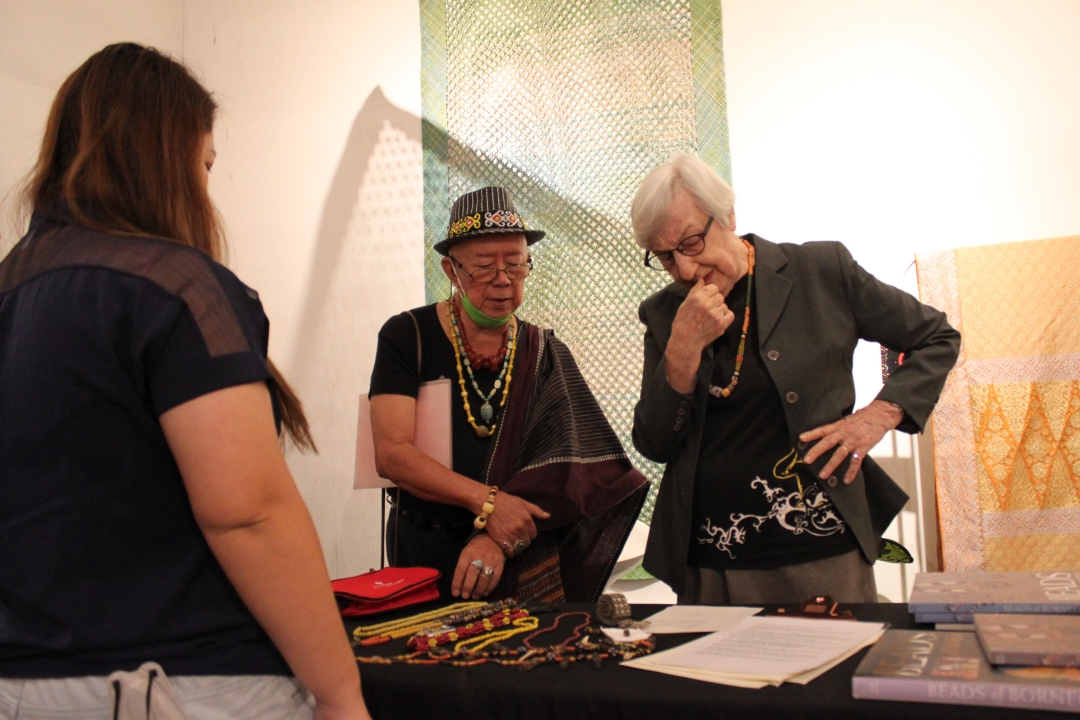 (From right) Heidi and Ong study the pieces (inset) belonging to one of the participants, Charlotte Phan.

I have read a number of articles featuring Heidi, who will turn 81 next month, and I know that she is an expert on the subject.

After all, she is the honorary curator of beads for Sarawak Museum Department, a director for the Borneo International Beads Conference (Bibco) and has also penned a book, ‘Beads of Borneo’, into which she has incorporated her knowledge and experience gained from studying the material culture of Sarawak for close to five decades.

However, the ‘All About Beads’ talk was the first time that I had ever attended any programme conducted by her – or any programme about beads for that matter.

Based on some features that I have read before, I know that beads go beyond trends and fashion. As far as Sarawak is concerned, I know that every community has its own version of beads – each with its own socio-cultural significance. 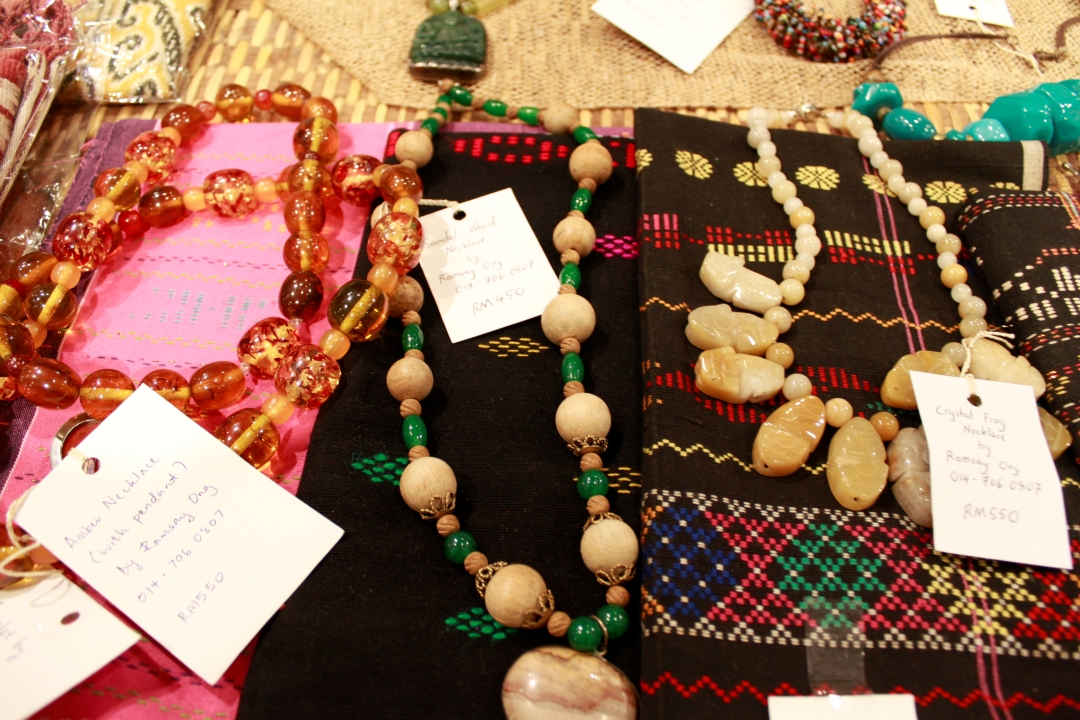 Some of the collections on display at Artistically About Kuching, which are also for sale. These necklaces are fashioned out of (from left) amber, sandalwood and crystal stones.

That said, the session conducted by Heidi highlighted more details that supplemented what I did know about beads. I was particularly drawn to a point about beads being a cultural element of many communities around the world.

“There are different kinds of beads culture. We’re not the only ones, as there are many others.

“In Bibco, we would get people who bring to us things from their own countries.

“Did you know that the Australian Aborigines made their beads out of seeds? We, in Kuching, copied that straight away – using ‘dabai’ (local olive) seeds!

“From South Africa, there’s a group that showed us how girls could write a love letter through beads. They would have nice little square (ornaments) made for the boys to wear on their necklaces, and the symbols on these (ornaments) may hint what the young men need to know, or the girls can ‘write’ a message telling the young men to get lost!”

Heidi also said in some cases, these cultures could overlap despite the vast distance between one and the other.

Taking the ‘ngepan’ (the elaborate women’s traditional costume of the Ibans) as an example, she said the ‘tangu’ – the heavily-beaded component of the attire that covers the shoulder area – was very similar to the one worn by the Inuits in Greenland.

“They (the Inuits) wear it over their knitted dress. Both are truly beautiful,” said Heidi. 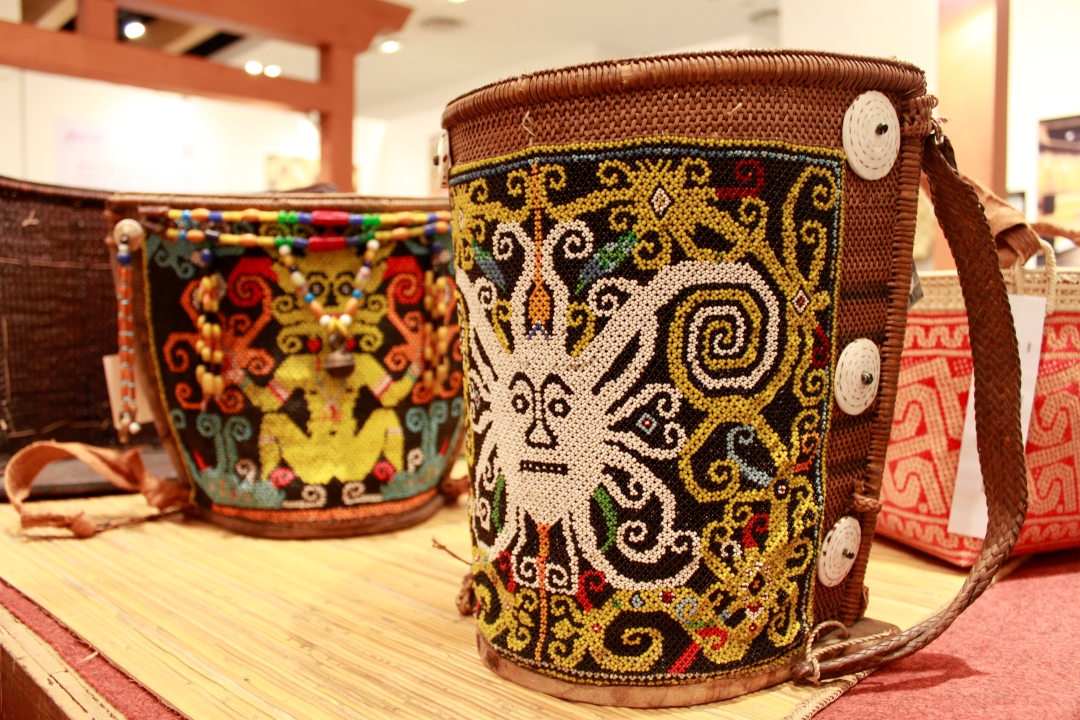 These woven bags look even more exquisite with intricate beadworks, of which the motifs are recognisably those of the Orang Ulu.

Another interesting thing about the ‘All About Beads’ session was Heidi’s no-nonsense presentation.

In one of the segments, she acknowledged that there were varieties of beads that could command high prices.

However, she also said: “Don’t worry too much about the prices. Just buy the beads that you like, but don’t pay a fortune for them.”

Additionally, Heidi regarded beads as a Sarawak heritage that would still be around for years to come.

“In my opinion, it would still be there, it’s still strong, and it’s not dying out.
“Rather, it’s mutating like any culture does.

“I mean – who wants gold teeth nowadays? Nobody, but that was a fashion once.

“The same goes with beads. People no longer wear them to indicate high ranks.

“Beads are now easily available and they’re not particularly expensive.”

It felt quite good to have added knowledge about beads and as I was driving out of the mall’s carpark, my mind began to structure an article for thesundaypost.

Upon reaching home, I opened the front-seat compartment to take out the house keys and it was there that I noticed my ‘tasbih’.

To those who do not know what ‘tasbih’ is, Muslims use it to mark the repetitions of recitation of ‘zikir’ (praise to Allah).

It resembles the Christian rosary beads, and the one in my compartment comprises wooden pieces, each about the size of a coffee bean.

I immediately sent a WhatsApp text to Heidi, asking: “Madam, is the Muslim ‘tasbih’ considered a beadwork?”

Seconds later, she replied: “Certainly! We had a special exhibition at the Islamic Museum during the fasting month, about 20 years ago.”

Well, what do you know – it turns out that I do have a beads item after all!

The ‘Artistically About Kuching’ is a component of the month-long What About Kuching (WAK) Festival 2022, which kicked off on Oct 1. 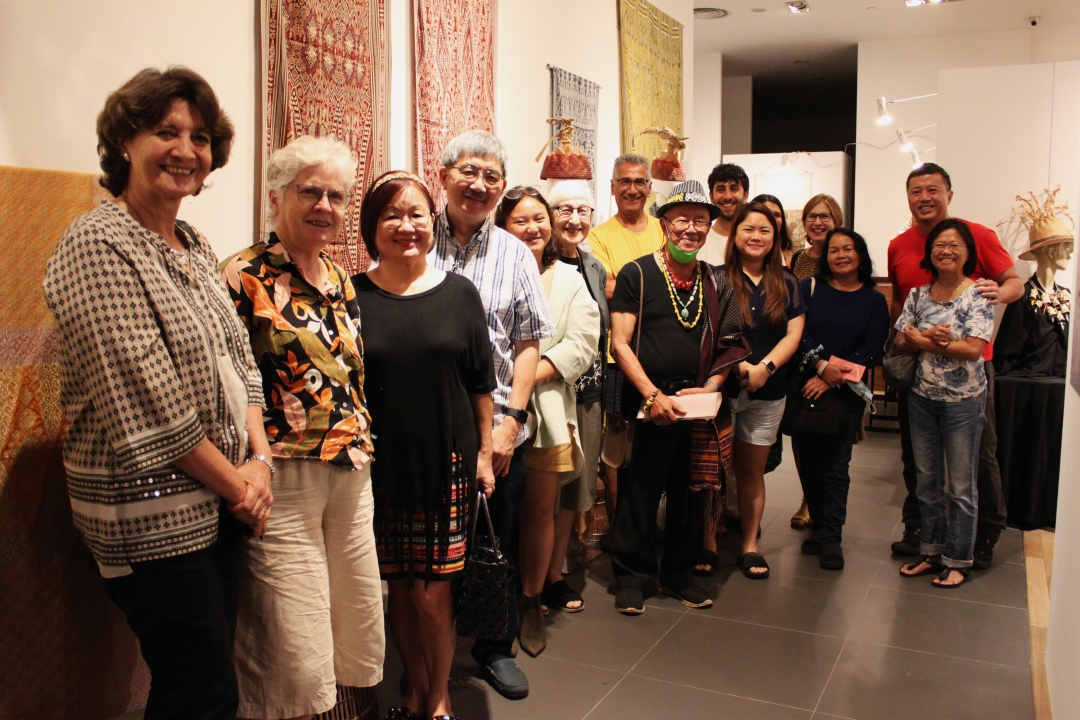 Heidi (sixth left) and Ong, on her left, join the participants in a group photo. Also seen are WAK founding directors (from right) Marina Tan and Donald Tan.

In his speech to officiate at the launch of WAK 2022, Minister of Tourism, Creative Industry and Performing Arts Dato Sri Abdul Karim Rahman Hamzah said ‘Artistically About Kuching’ meant to be a platform to showcase some of the best of arts and crafts in Sarawak.

“Kudos to WAK for creating this community platform, and I must congratulate all the communities involved for embracing this showcase as your own,” said Abdul Karim, who is also the Minister of Youth, Sports and Entrepreneur Development Sarawak.

Open to the public from 11am to 8pm daily at The Spring Mall, the ‘Artistically About Kuching’ exhibition also has a sales segment of high-quality artistic pieces slated for enthusiasts and collectors.