Wednesday, February 1
You are at:Home»Features»Celine Yong powerlifting to victory
For the freshest news, join The Borneo Post's Telegram Channel and The Borneo Post on Newswav. 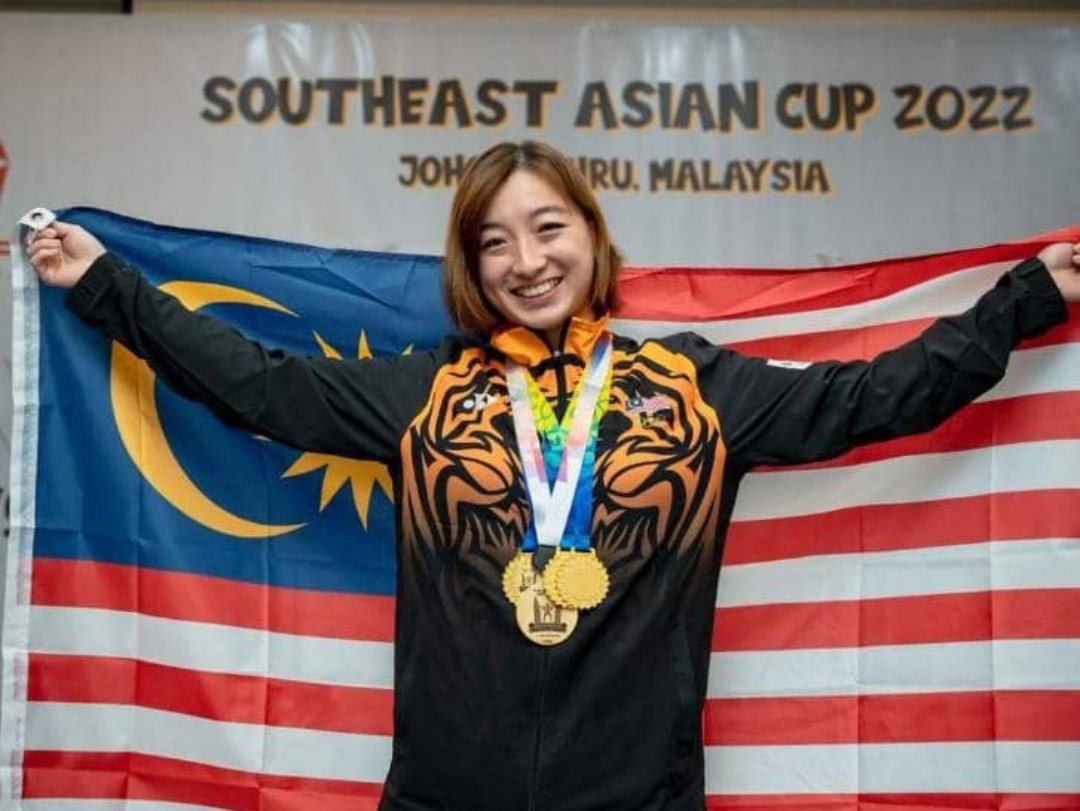 Celine holding up the Jalur Gemilang in celebration of her victory at the SEA Cup Championships.

POWERLIFTING is still not a very well-known sport in Malaysia as many people think of it as the same as weightlifting.

It is her dream to create a platform in Kuching so that powerlifting can have a wider presence and attract more participants.

“It is really a very good sport for one’s physical and mental health, as those who are in their 70s or 80s can still take part in it,” she told thesundaypost.

Celine is already running her own powerlifting gym in Kuching called ‘Strength Asylum’, located in Gala City and scheduled for official opening this November.

“I want to teach people this sport and let them know the benefits of it. At the same time, I also want to unearth hidden talents so we can have more Sarawakian representatives in national and international events,” said the 23-year-old Kuchingite, who clinched four gold medals and set three new records at the Southeast Asian (SEA) Cup Championships that took place at the Trove Hotel in Johor Bahru, in September this year. 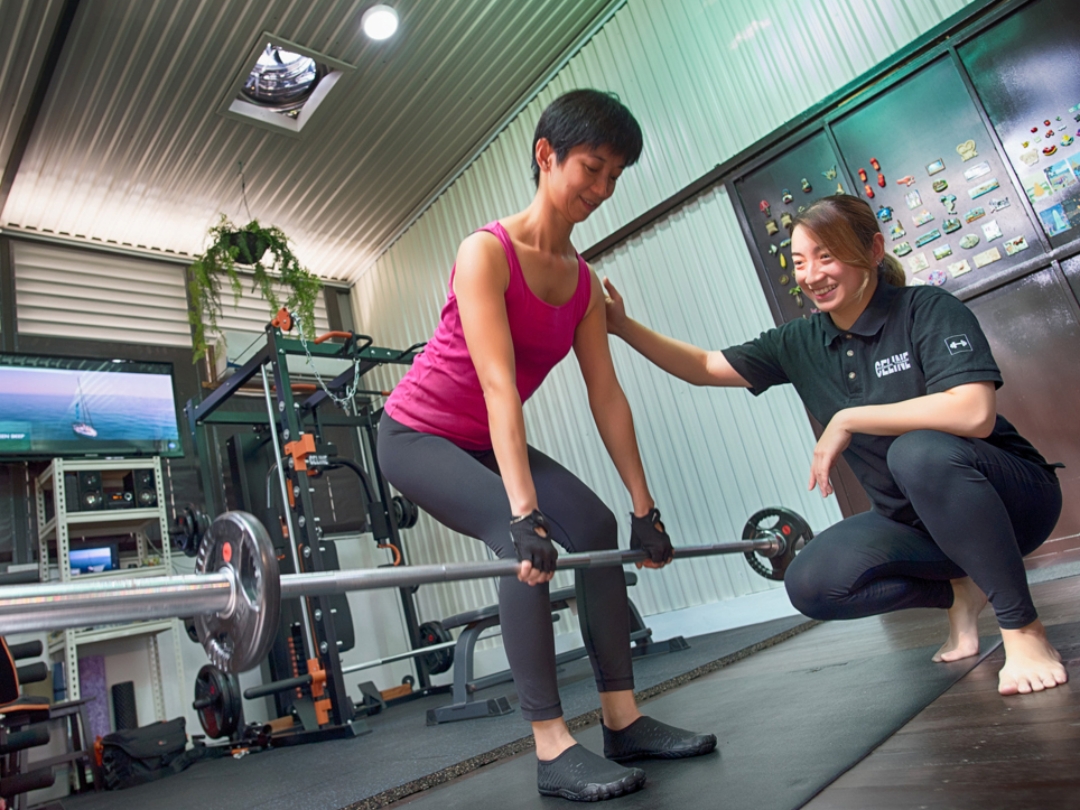 Celine training a client at the gym.

It was indeed a very impressive achievement for someone who had only taken up the sport early last year.

“This win still feels surreal to me because being able to represent Malaysia has always been a dream of mine.

“When I stood on the podium with the medals around my neck and listening to our national anthem in the background, it felt like all those sweat, tears and hard work poured into my preparation for this competition, were worth it,” said Celine.

“I previously won gold at the nationals, representing Sarawak, which then got me selected to Team Malaysia.

“Those times were already special to me but this time, being able to step on an international platform and see athletes from other countries come together, it was a totally different experience and I learned a lot from it.

“My future target is to be able to represent Malaysia in the Asian and World Championships – and win so that people would know that Malaysia could do it as well.” 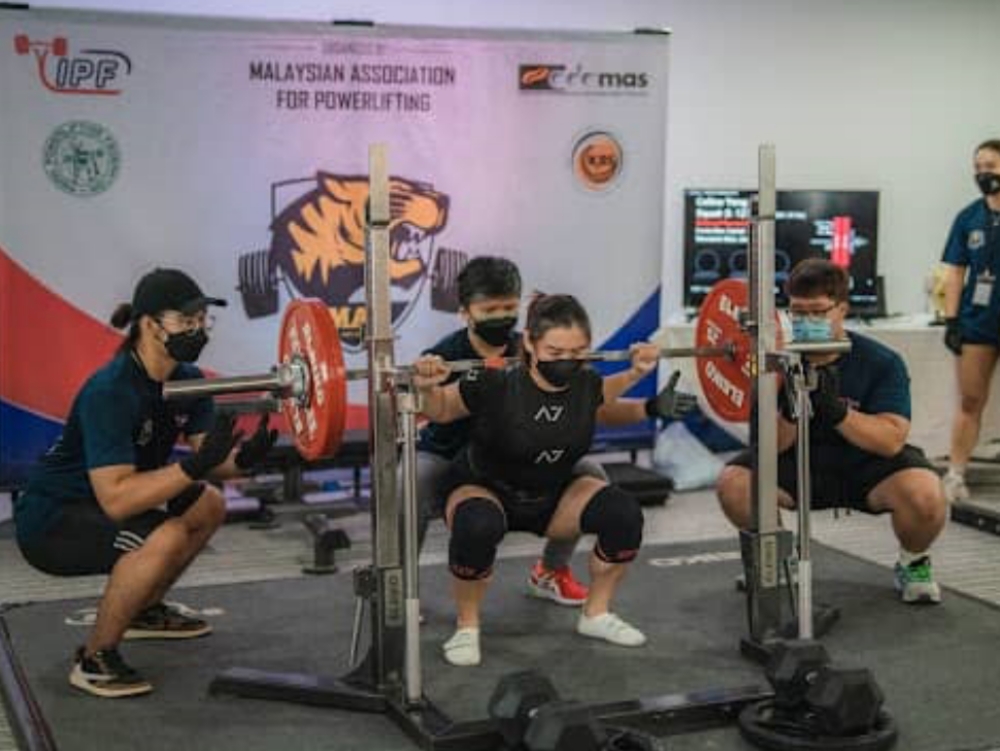 After having completed her studies in the UK, Celine returned to Kuching in October 2020, but she only started training in powerlifting in February 2021.

Her first competition was in April 2021, at a small Kuching meet where she finished runner-up in the Junior Under-76kg category.

Still, it was a big eye-opener for Celine as it was the first time she saw professionals powerlift, which ignited the fire in her to continue on and reach out to grab gold one day.

She wanted to be as strong and as influential as her idol, International Powerlifting Federation (IPF) champion from Canada, Jessica Buettner.

“I started with Nasrul Faiz as my coach, who is also a personal trainer at my new gym. Currently, I am training under Kelvin Lam, a powerlifting coach based in Kuala Lumpur.

“Financially, I support myself from my full-time job. Powerlifting is considered quite an expensive sport, so I’ve been working hard on my personal training and food business in order to support myself through this.

“I was hoping that my results could influence our Sarawak government so that they could give us more support, financially, in the future.

“On the morale side, definitely I get the support from my family, coach and close friends,” she said. 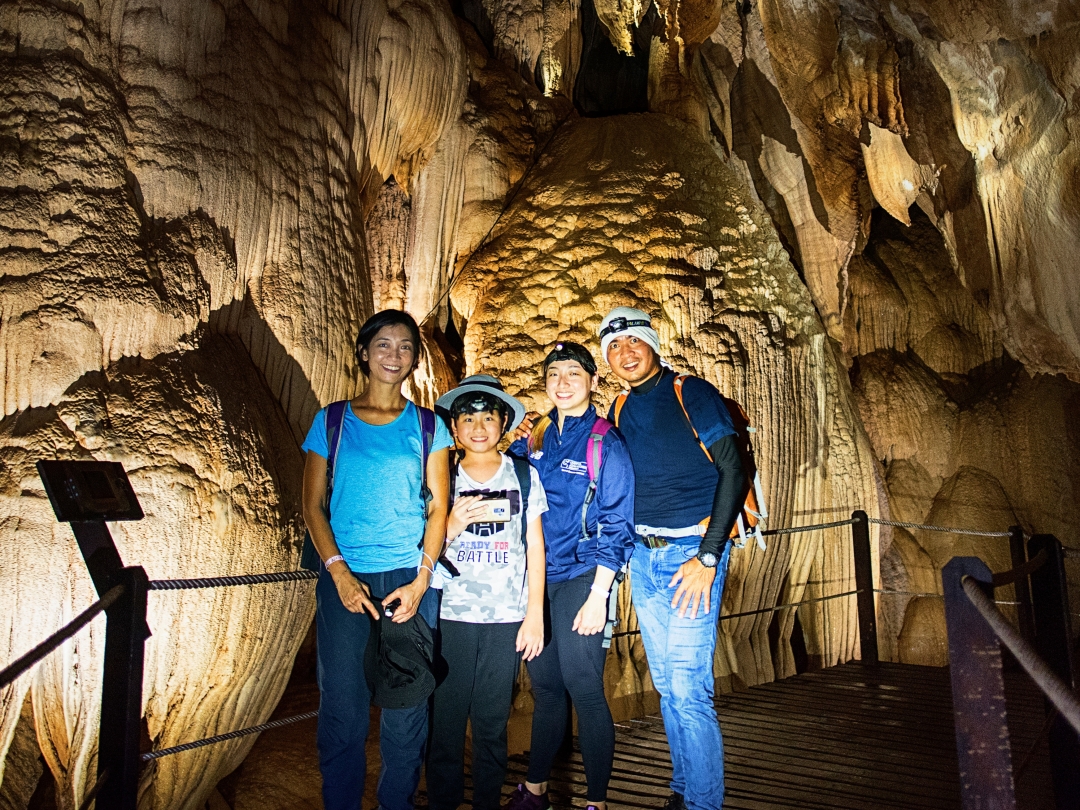 Celine, her brother Bernard and their parents, Dennis and Sok Hun, in a photo taken during their trip to Mulu.

Celine was a state swimmer during her secondary school years, but she stopped because she wanted to focus on her Sijil Pelajaran Malaysia (SPM) examinations.

She then went to the UK to study Sports and Exercise Science at Liverpool John Moores University. It was there that she started seeing how common going to gym was, so out of curiosity, she started working out at one of these facilities as well. 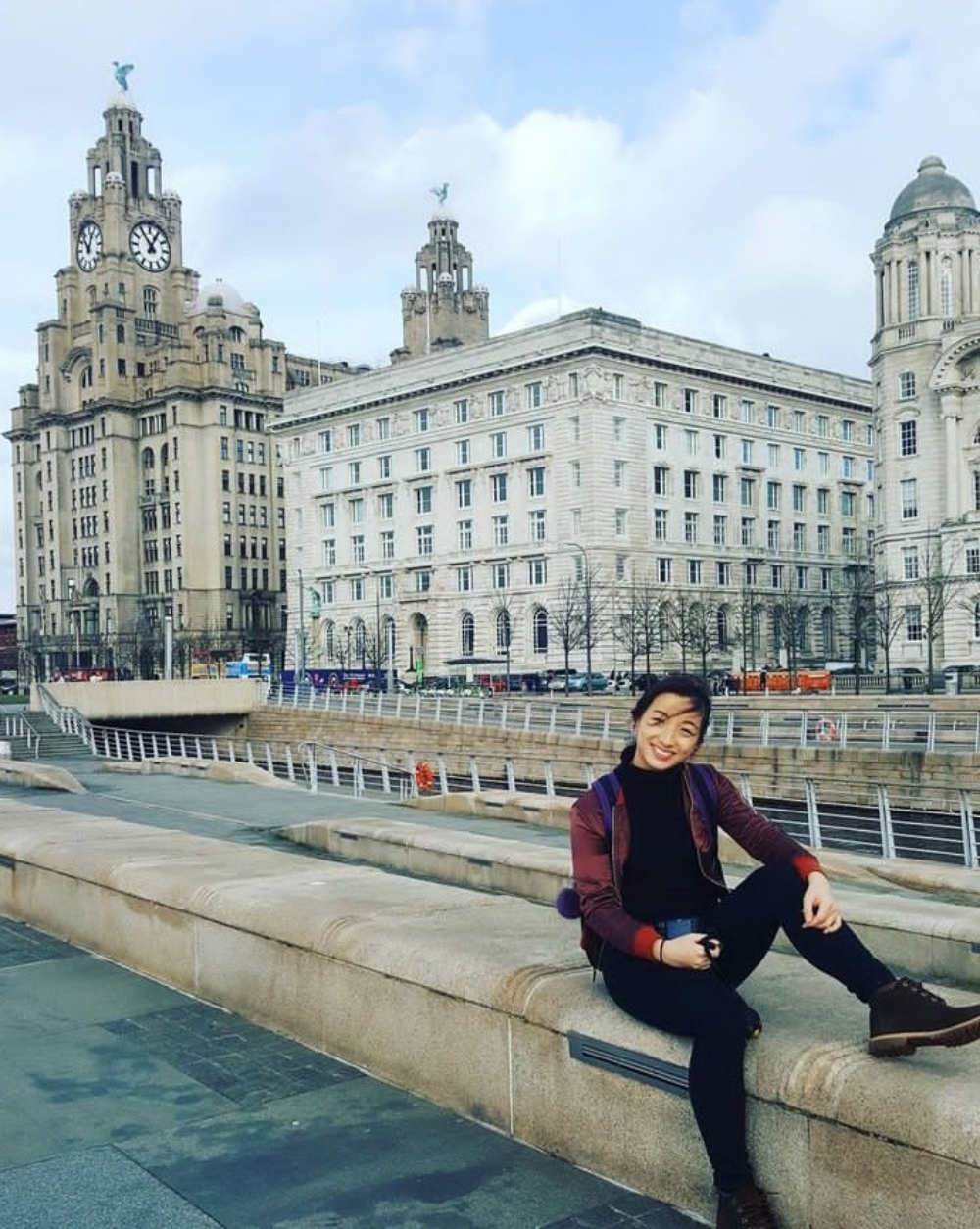 “I went with a few friends and they taught me the basics of bodybuilding; then I started to fall in love with it and it gradually became a lifestyle.

“However, I only started training for powerlifting upon my return to Kuching after having graduated from the university.

“One of the trainers saw me training in the gym one day, and told me that I had the potential to do powerlifting, observing that I was really strong.

“So me being me, I decided to just go for it. I started going for small competitions, which later led to what I achieve right now,” said Celine. 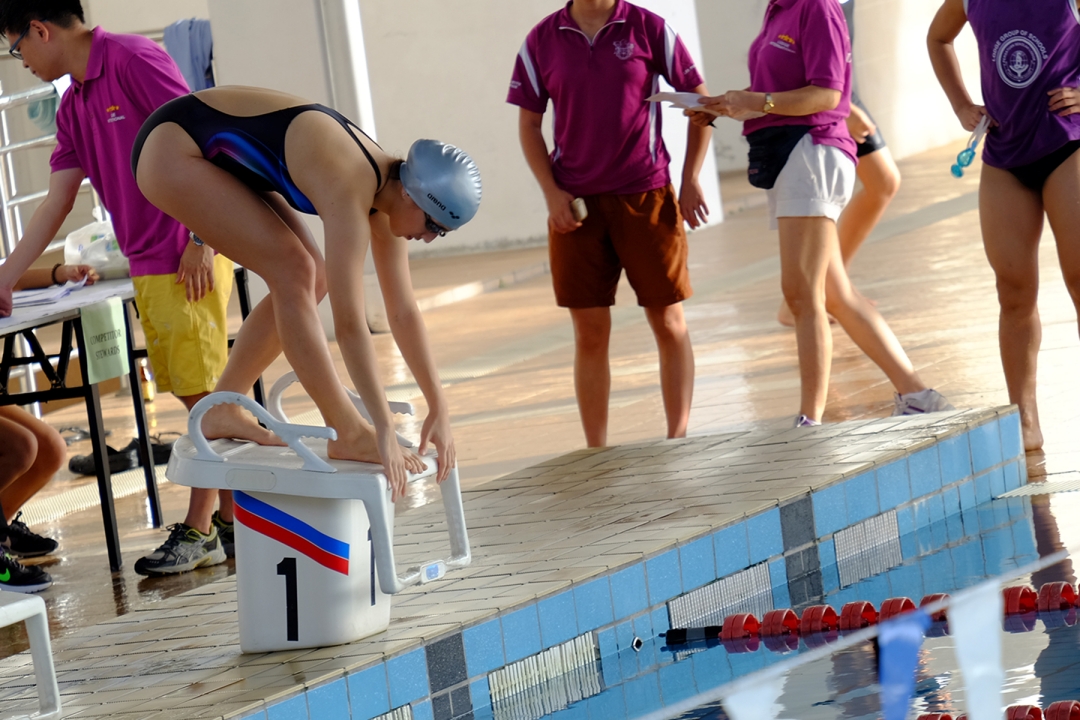 Celine, in a photo taken during her swimming days back in secondary school.

Those interested to try out this sport either for leisure or professionally, can come to Celine’s soon-to-open gym.

Find Celine on Facebook (Celine Personal Training) and Instagram (@celineyong22) to know more about her powerlifting journey, and what is next for this strongwoman.

She is also on TikTok via username @celineyong22. 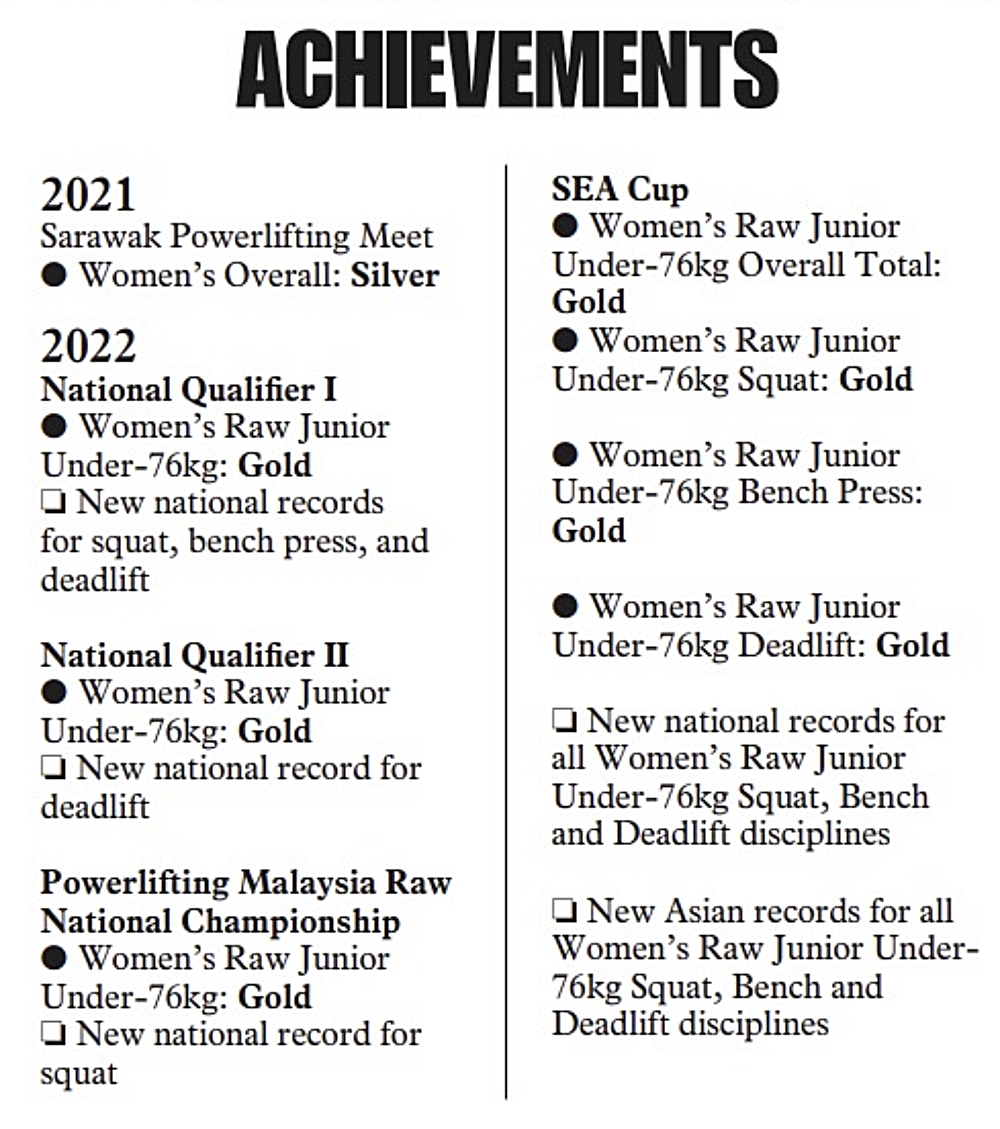