Friday, December 2
You are at:Home»Features»Comeback singing sensation Winnie Albert finally getting her dues 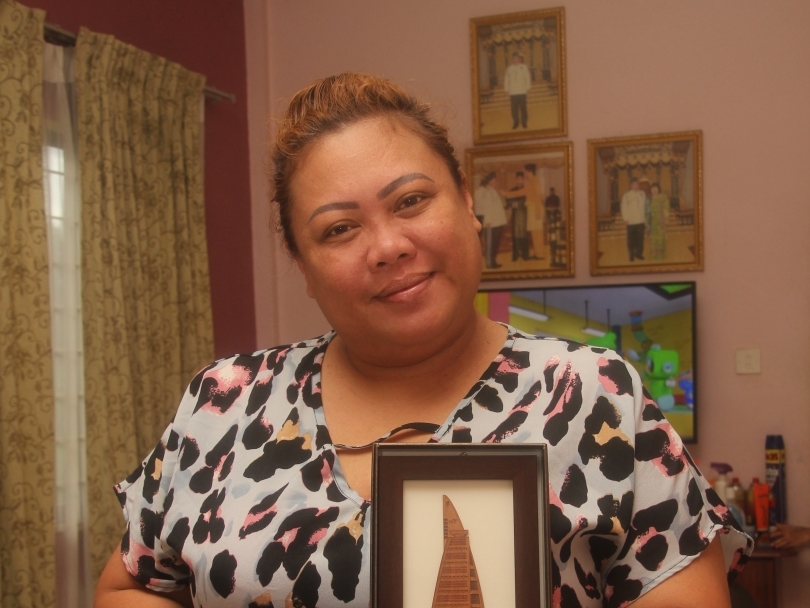 Winnie showing off a souvenir received during one of her singing engagements in Kuala Lumpur.

IN her 31 years of singing, Winnie Albert has performed all over Sarawak and recorded a number of albums and music videos. She has become a household name, particularly in her Iban community, thanks to her talent for art and her entertainer persona.

A natural talent with a powerful singing voice, she has the ability to capture the attention of her audience not just with her voice, but also with her zest and humour.

Singing has been her passion since she was small.

Her parents were right when they convinced her to compete in an annual children’s singing competition produced by the Radio Television Malaysia (RTM) when she was in primary school; she came in third place.

With the encouragement of both her parents, she continued to pursue her passion, expanding her vocal range and competing in a few more competitions, always finishing in the Top 3 as either a champion or a runner-up. When she was 14, she recorded her first album. It was to be the start of her involvement in the Iban music industry.

Singing in English and Malay

Winnie proves versatile on stage with Malay and English numbers added to her song list. She is funny, entertaining and energetic. Whether she is in a glittering attire or just some simple outfits, the down-to-earth songstress never loses her commanding stage presence even when she performs barefooted for greater movement, or interacting with her responsive audience with a mixture of Malay, Iban and English words.

She also has her ups and downs as an artiste striving to stamp her mark and pursue her passion. The pains and frustrations, she keeps to herself as she says in her own words: “Let it be that only God and I know.”

In an industry where quantity seems to have outdone quality, many promising singers, including Winnie, may have to take their own initiatives to reset the trend even as the industry’s focus on quality is picking up.

Now at 45, Winnie has known better the struggles and niggles of being in the industry with all its twists and turns. As far as singing is concerned, her determination has always been high.

When she finally got her dues after a TikTok video clip of her belting out Datuk Seri Siti Nurhaliza’s hit tune ‘Percayalah’ went viral in August this year, she felt like it was a sweet revenge in a sense that her dream had finally come true.

“No more ‘revenge’ now,” she confides.

“I am humbled and moved by the recognition accorded, especially by our ‘Semenanjung’ (peninsula) counterparts, thanks to the TikTok user who posted that video clip.” 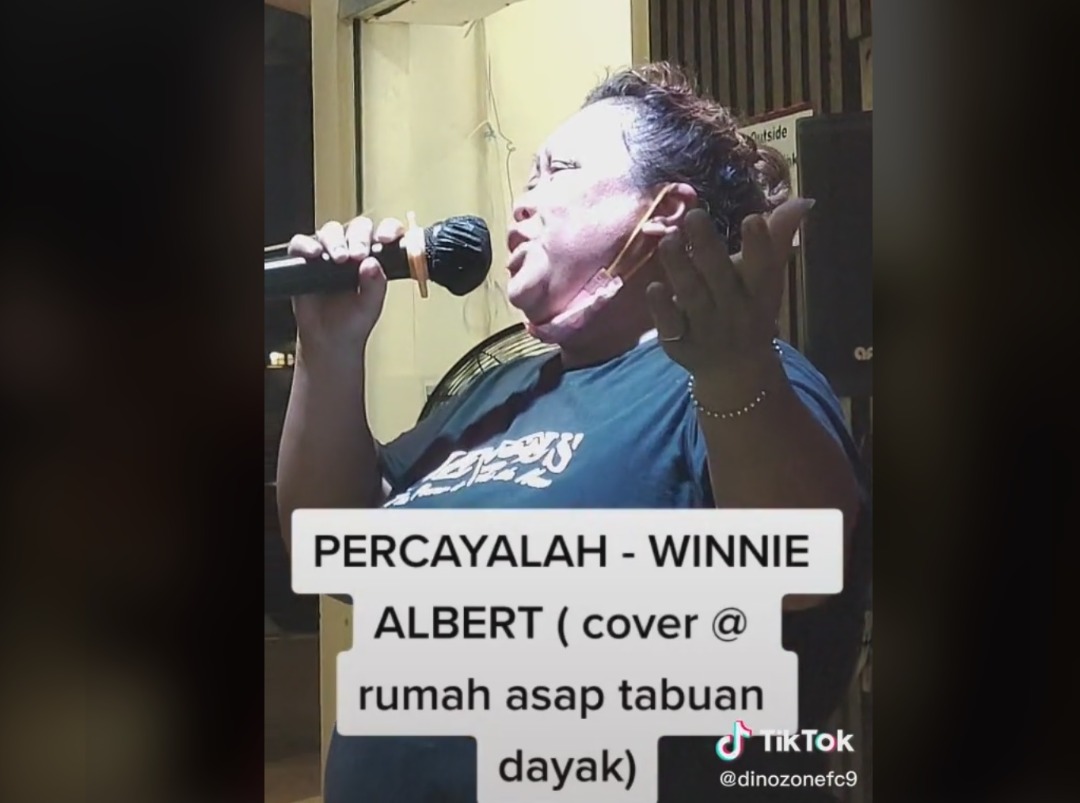 The screengrab of Winnie covering ‘Percayalah’ at Rumah Asap Tabuan Dayak from the viral TikTok video, which boosted her popularity.

The impromptu performance on one of her casual visits to an eatery in Tabuan Dayak, featured in the viral clip, had garnered tens of thousands of reactions, positive comments and praises from fans and netizens, including the composer of the song himself, Ajai.

One of Malaysia’s top composers and a notable TV talent show judge, Ajai remarked that Winnie had the attributes that made a song great – pitch perfect, good voice and the ‘feel’ of the performance.

“What I’m saying is these are all in this cover singer’s song, which is wonderful to listen to,” he wrote on Facebook.

Actor and accomplished comedian Harith Iskandar said he had goosebumps watching Winnie sing, adding that ‘her control, tone and raw talent are outstanding.’ Dubbed as the ‘Godfather of Stand-Up Comedy’ in Malaysia, the successful comedian wrote on social media: “I did not know you before I saw this WINNIE ALBERT, but you deserve to be a star!”

“A star is born,” he added. And without hesitation, he expressed his intention of inviting her to be on his big show, which was forthcoming. He held to his words when he officially extended his offer to her soon after that.

“Yes, I did receive his offer to perform in the big show, but I had to decline it as I had already committed myself beforehand to sing at a wedding reception in Bintulu, which falls on the same day as the show.

“I know I’m losing a big opportunity here but I have to be true to my words – that is Winnie Albert!” she asserts.

Winnie is a star in her own right, a hidden gem discovered and now a sensation in the music industry, but her characteristic humility continues to shine through. 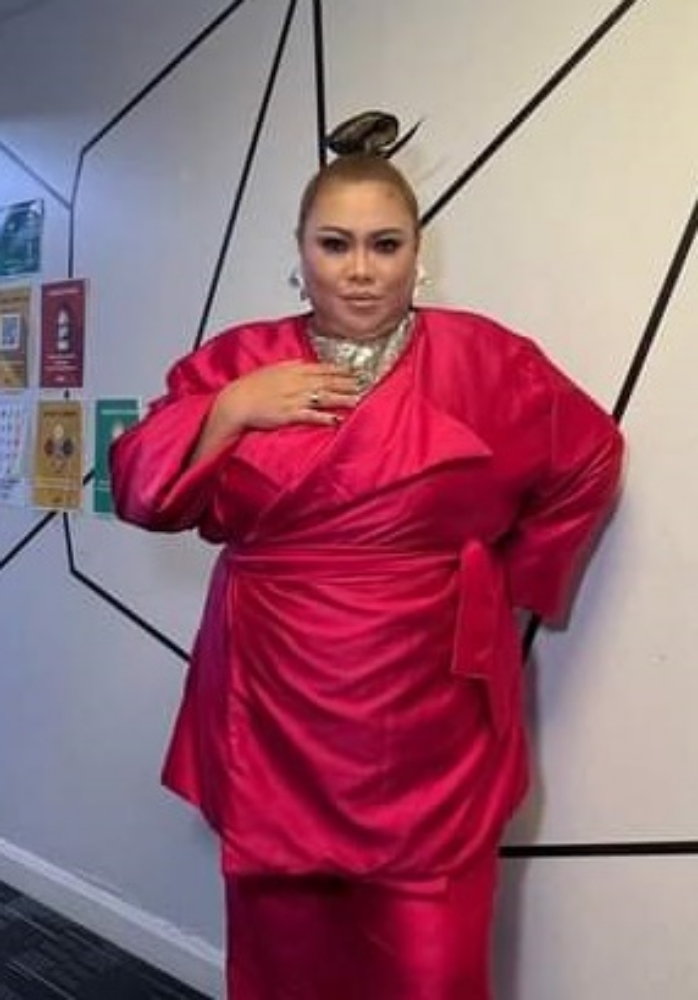 Winnie about to make her maiden appearance on ‘Meletop’, flaunting her outfit designed by a Sarawakian.

When an official from the popular Malaysian television infotainment talk show ‘Meletop’ called, she thought it was a prank.

“Is this really from ‘Meletop’?” she tried to ascertain.

They wanted her to be on the show. As a result, she was featured in the infotainment talk show just a month after her video clip went viral. It was her maiden appearance on national television, and Winnie did not disappoint.

With her strong stage presence and powerful singing, she made Sarawak proud.

“But I cannot deny how nervous I was in the beginning. Why not? It was my first time performing before a wider audience. It was like the whole world was watching. I prayed for myself: ‘Dear Lord, don’t let me be nervous’, and everything went well,” she recalls with characteristic humbleness of her first few moments in ‘Meletop’. 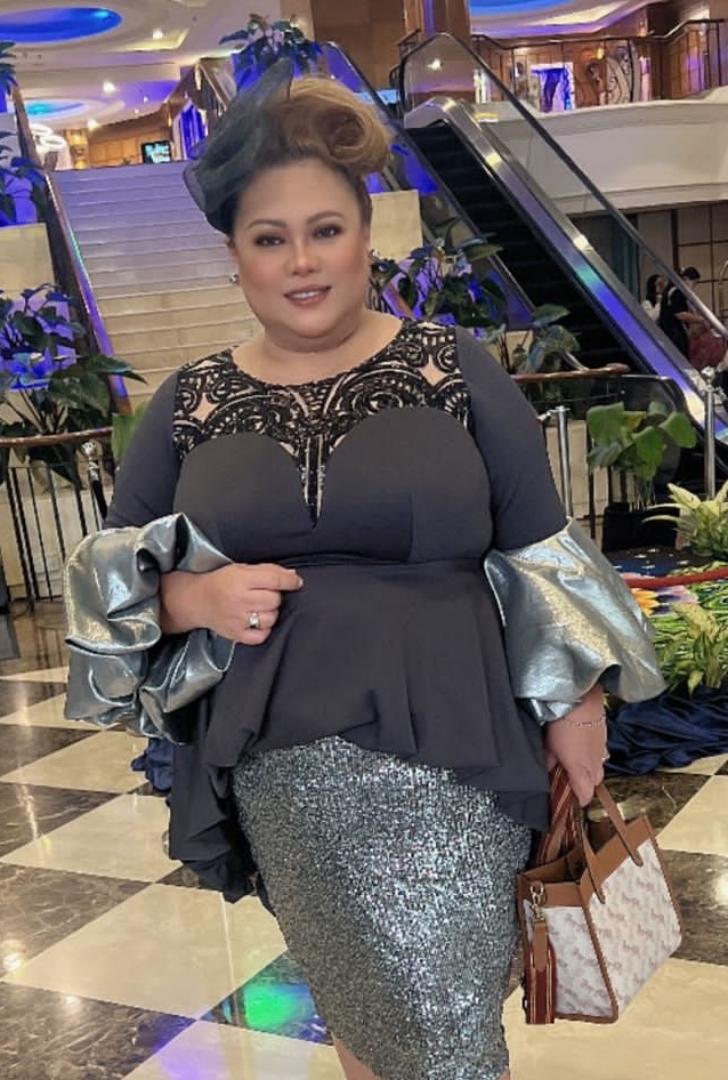 The songstress has never been busier with offers and bookings keep flowing in since her video clip went viral. She has been shuttling to and fro between Kuching and Kuala Lumpur for singing engagements in the federal capital, apart from entertaining at dinners and other events back home.

“I love my job, despite the hectic schedule,” she says.

For a woman who has endured many tough times in life, Winnie’s present achievement is beyond her wildest dreams.

She cannot ask for more.

Away from the limelight, she is a very simple and pragmatic person. She had lived with her in-laws in a longhouse with no electricity or generator in the outskirts of Bintulu.

“It was tough living without electricity and being an ardent singer, I missed a lot of opportunities as I could not be reached via phone. I could only help my in-laws to sell vegetables and ‘ikan salai’ (smoked fish) because I always believe in helping one another which, to me, is very important.”

Winnie also felt the need for her to earn an income to help support her extended family. As a result, she had to move to town with her husband and children. With her God given talent, she sang to bring extra income.

“My life is a long story,” she says: “If I were to talk about it for three days and three nights, there would be many tears to shed. Seventy percent of my life was filled with pain. But it has changed for the better and all the sob stories I have put behind me.” 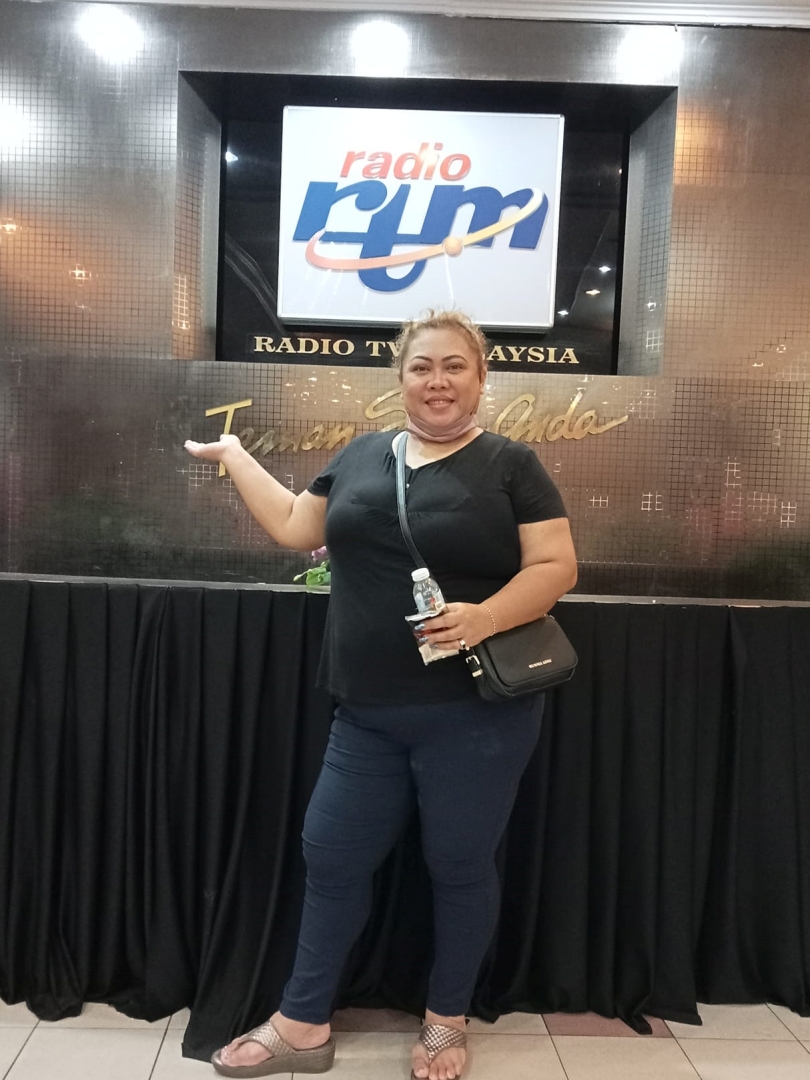 Winnie in a photo taken during her Kuala Lumpur trip in September, where she made a stop at RTM national headquarters, the ‘Angkasapuri’.

Her newfound fame does not come without a price, which she has been able to tackle nonetheless. She is not spared of rude body shaming comments by unscrupulous netizens on social media.

“To be honest, it did hurt at first. Nobody likes to be in this size. Many times I got frustrated even to look at myself in the mirror, but I was quick to get over with the frustrations by being thankful to God.

“I would pray: ‘Lord, forgive those who are blunt and ruthless and unkind with their words, give them good health, good bodies… bless them’.

“I was humbled and touched by fellow artistes in ‘Semenanjung’ when they appreciated my singing and showed so much respect for my talent. They said to me: ‘Don’t worry about the body shaming, babe… You have talent, your voice is powerful and superb and you’re shining like a star’,” she relates.

Some have even compared her to Tina Turner and the late Adibah Noor, but for all the praises and respect, Winnie keeps her feet on the ground and is careful not to let her newfound fame get into her head.

In response to the body shaming comments, she quips: “I’m kind of ‘bullet-proof’ and will not be affected anymore. Furthermore, I’m still singing – they can’t harm my voice.”

Singing is in her blood. Her paternal grandmother was a famous ‘seh gendang’ (female singer skilled in singing endless ‘pantun’, or rhymes) while playing the ‘gendang’ (Malay traditional drum) in Sebuyau area, from where her father originated.

“Sadly, her ‘gendang’ was lost with the passage of time,” she says.

Winnie is not the only singer in the family. Her sister Stephanie and her daughter Olivia Christie are also good singers who have cut Iban albums.

“In order for the industry to progress, we need to support and help one another. While doing shows in ‘Semenanjung’, I have told those in the industry that there are still many talents yet to be tapped in Sarawak and that I am not the only one – ‘Please don’t forget us’, I said,” she recalls.

Winnie comes across as a humble and hospitable person, and she demonstrates many of these characteristics even when performing on stage, where she believes in giving her all to everyone.

“Be yourself and don’t be someone else,” she always says. “And always learn to be humble and respect people.” 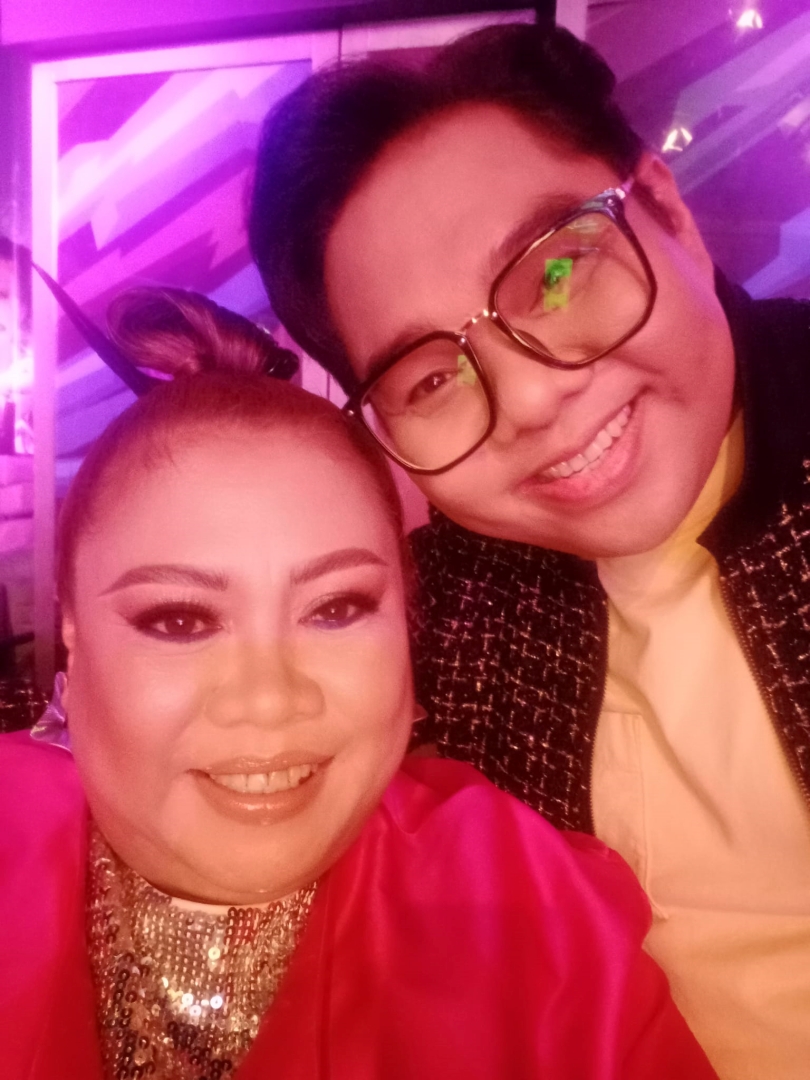 Winnie in a wefie with fellow Sarawakian artiste, Bob.

Although it appears simple, it is a loaded statement that has defined who she is today and how she has overcome adversity to nurture her talent and make her mark in the local music scene.

Winnie is a musically talented mother of four children, including a foster child who is proud to have her as a mother.

Winnie radiates warmth and love, and is equally friendly with her friends. It would not be long before we would be in their shoes.