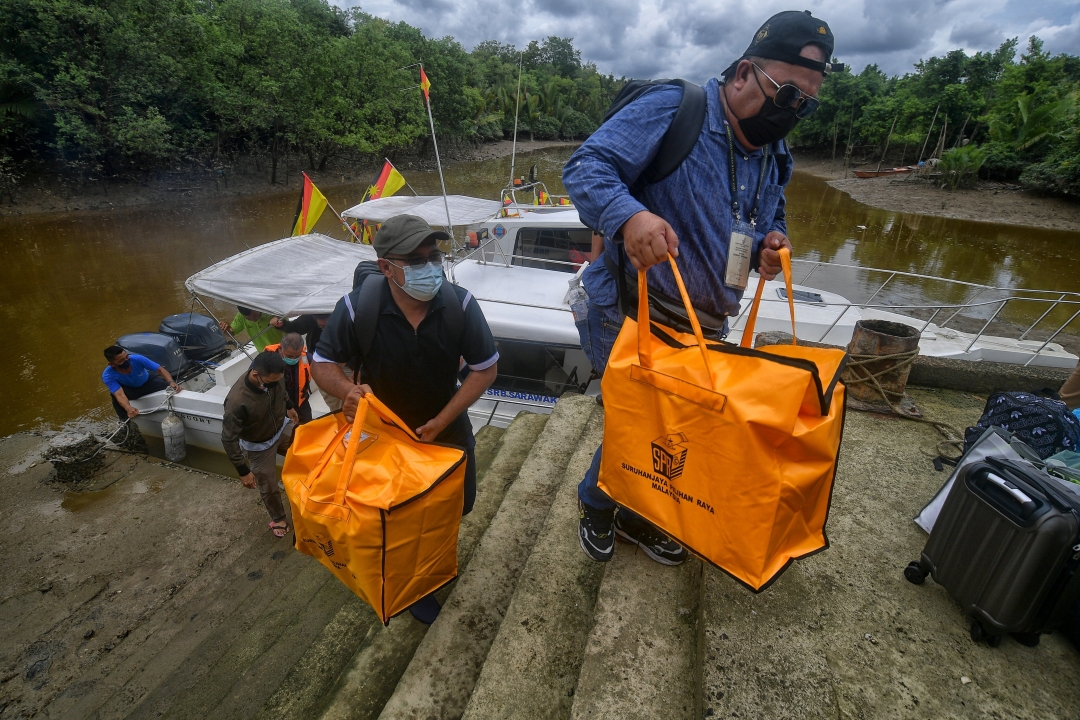 Ideally, elections should be held in fine weather, but circumstances are not normal now, says the columnist. — Bernama photo

THE importance of a stable government for this country cannot be overemphasised. It outweighs the hazards of the floods, the landslides, the rough seas and the strong winds.

We shall save the country from the political storm and save the parliamentary system of government. This political storm, as a result of an over-dosage of intrigues, can cause more havoc to the foundation of the institutions of government than the power of the natural disasters does to the environment.

In both senses, we shall weather the storm of any kind and look forward to a fine day.

For the past couple of years, the parliamentary system of government in Malaysia has been undermined by acts of politicians who think more in terms of clinging to their power and less of the daily needs of the ordinary mortals and the economic health of the nation.

Many MPs were spending a lot of their time and energy in jockeying for power and positions. In the process, the proposals relating to state rights, especially on the ownership of oil and gas found within Sarawak’s territory, have not been fine-tuned and ready for implementation.

What about the delegation or devolution of powers or the autonomy over education and health? These long-outstanding issues should have been solved by the parliamentarians before the dissolution of Parliament.

The Special Committee on Malaysia Agreement 1963 (MA63) should have come up with some ideas on how to handle the issues relating to the state rights and interests and let the stakeholders know. In the absence of specific public announcement, they tend to guess that these issues have not been finally settled and cast in concrete terms.

We hope that the new government formed after the General Election (GE) on Nov 19 will complete the job to the satisfaction of most people.

Please do not fail us.

We pin our hopes on the capability of the next crop of legislators from Sarawak to press for restoration of state rights and interests in and outside Parliament.

Our MPs must be good lobbyists. So choose and send good lobbyists to Kuala Lumpur come the GE. All the 31 MPs from Sarawak should speak with one voice, not just articulating the interests of their respective political party.

The planners of the infamous coup d’état known as the ‘Sheraton Move’ might have had the best intentions in the world, but at the end of the day, it did not produce a stable government.

Instead, what we have been seeing, hearing and experiencing are endless squabbles among the Sheraton promoters and supporters over the spoils of war. Much time was spent on the choice of the Prime Minister, his deputy, on the appointment of other ministers, of directors or chairmen of government-linked companies; or on who should have been the Attorney General, or even which judge should preside over which case.

The independence of the judiciary was being compromised.

Positions with a potential of political power (and juicy emoluments!) were subject of haggle and barter.

Elbowing and trampling on each other’s body (dead or alive) in order to keep position and authority, creating and discarding alliances; friends today, tomorrow, enemies; allies again, the next day. These activities have left little time for serious thoughts about the fate of ordinary mortals and the importance of morals or honour in politics!

The most serious move was the assault on the judiciary; certain judges were harassed. The independence of the judiciary was being compromised. An attack on this pillar of the government is an assault on the rule of law itself, the bulwark on which the constitutional monarch is instituted.

Well, Parliament has now been dissolved. Cockpit closed, no more cockfights. There may be a window of opportunity for things to be put right, depending on how the voters behave in the general election.

As potential candidates for election are preparing for the hustings, the immediate past-MPs, who are members of a political party, are lobbying their party bosses to reserve a ticket for them.

The greenhorns are hoping to be picked as candidates, saying that fresh blood is better than the old guard. Let us see how they will perform at the polls.

Many people are not happy with the timing of the general election. A dozen ministers descended upon the Astana Negara to persuade the Yang Di-Pertuan Agong to refuse the request by the Prime Minister to dissolve Parliament.

Fortunately, we have a wise King.

Ideally, elections should be held in fine weather, but circumstances are not normal now.

The political storm would be more disastrous than the effect of bad weather if we continued with the government via the Statutory Declaration. Let there be no repeat of such ‘Tebuk Atap’ or ‘Pintu Belakang’ government.

It is hoped that the newly-registered voters including the Undi18 voters will go to the polls in droves, rain or shine.

I am eagerly waiting for the polling day too, though well over 18!

Keep and nourish it.

The aspiring MPs must move into the political arena now with fresh ideas on how to run Malaysia. A ‘New Deal’ is required.

I appeal to every new voter, exercise your suffrage wisely. In your hands lies the future of a stable government for this country.

Previous ArticleCeline Yong powerlifting to victory
Next Article At Adau: Mixing storytelling into their music