Wednesday, December 7
You are at:Home»Columns»Nature Matters»Turtles and tortoises: Two whopping wonders of our world 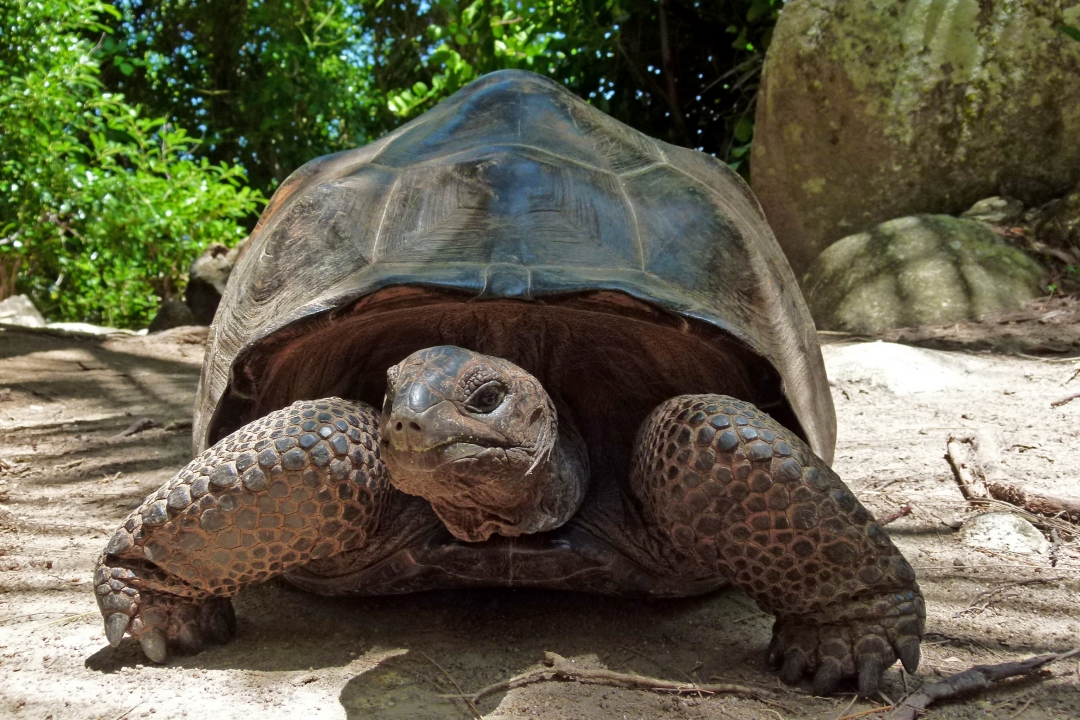 Aldabrachelys gigantea on Moyenne in the Seychelles. – Photo by Xjschx/Wikimedia Commons

AS children, my sister and I owned a dog, two rabbits, a guinea pig, a flock of homing pigeons, two budgerigars, and two tortoises. Our back garden was a veritable menagerie. It was the two tortoises that fascinated me by their eating and hibernation habits.

Later in life, my daughters acquired three tortoises and a dog, who loved licking them, and these tortoises would hibernate in the cold winter months in a box of straw inside the house. At about Eastertime, they would wake up and love having their shells cleaned with linseed oil and their eyes bathed in tepid water. They enjoyed three seasons of wandering around our (what we thought was a secure) garden and nibbling the young shots in my vegetable patch until one day, one went missing. We found a hole burrowed under the fence and so we lost the tortoise.

Two years later, a kindly person returned our missing tortoise to us, and she had found this tortoise in her vegetable patch some 3.5km from our house. That same year we moved house and brought the tortoises with us, but the garden was not secure and near a main road, so we gave them to a local tortoise sanctuary. Longevity is a feature of tortoise life and I reckon, now some 40 years later, they are still thriving!

Exactly 20 years ago, whilst sailing in the Indian Ocean, we decided to visit the Seychelles island of La Digue renowned for its tropically weathered granitic outcrops, which were of particular interest to me. To our great surprise, we came across a herd of giant tortoises roaming freely on an estate. They were none other than Aldabran giant tortoises.

Belonging to the same Superfamily of Testudinoidea as the Malaysian giant turtle, this tortoise is one of the largest globally. Once extinct in many parts of the Indian Ocean through the hunting of European mariners, they still exist in the wild on the atoll island of Aldabra.

Their upper shells (carapace) are brownish tan in colour and are distinguished by their high dome shape. The underside of the shell (plastron) is a creamy colour. Weighing on average at about 160kg, they possess very sturdy, heavily scaled legs to support their huge weight.

With very long necks, they are able to nibble tree leaves up to a metre above ground level. Their enormous appetites, fed through close grazing of ground hugging plants, exert pressures on their environment, and have created what is known as ‘tortoise turf’. This sward sees a mixture of over 20 species of grasses and herbs.

As herbivores, they mainly feed on grasses, leaves, plant stems, and fruit, and sometimes invertebrates and carrion. Living in environments with seasonal rainfall, they rely on the moisture derived from vegetation in the dry months and dig holes under trees as well as submerging themselves in pools to simply cool off during the heat of the day.

This species of tortoise shell shape is determined by their feeding habitat. For those in ground sourced food, their shells are more domed shaped at the front extending downwards towards their necks. Those found in habitats of shrubs and trees exhibit more flattened shells with the front curled upwards to allow their long necks to freely move upwards.

These are some of the longest living animals in the world. Some are thought to be over 200 years of age, having outlived all humans who first observed them. Currently, a related species of giant tortoise in the Seychelles is believed to be the world’s oldest at 190 and ‘Esmeralda’, an Aldabran giant, is the second oldest at 178 years.

Conservation of these giant tortoises has been in existence for a very long time. It was Albert Gunther, the Keeper of Zoology at the Natural History Museum in London, who, in the late 19th century, worked with Mauritius to create a preserve for these tortoises.

Today, a related species in the Seychelles has been raised in captivity and reintroduced into the wild by the Nature Protection Trust there. On the conservation status of the International Union for the Conservation of Nature (IUCN), the Aldabra giant tortoise is ranked as a Vulnerable Species. 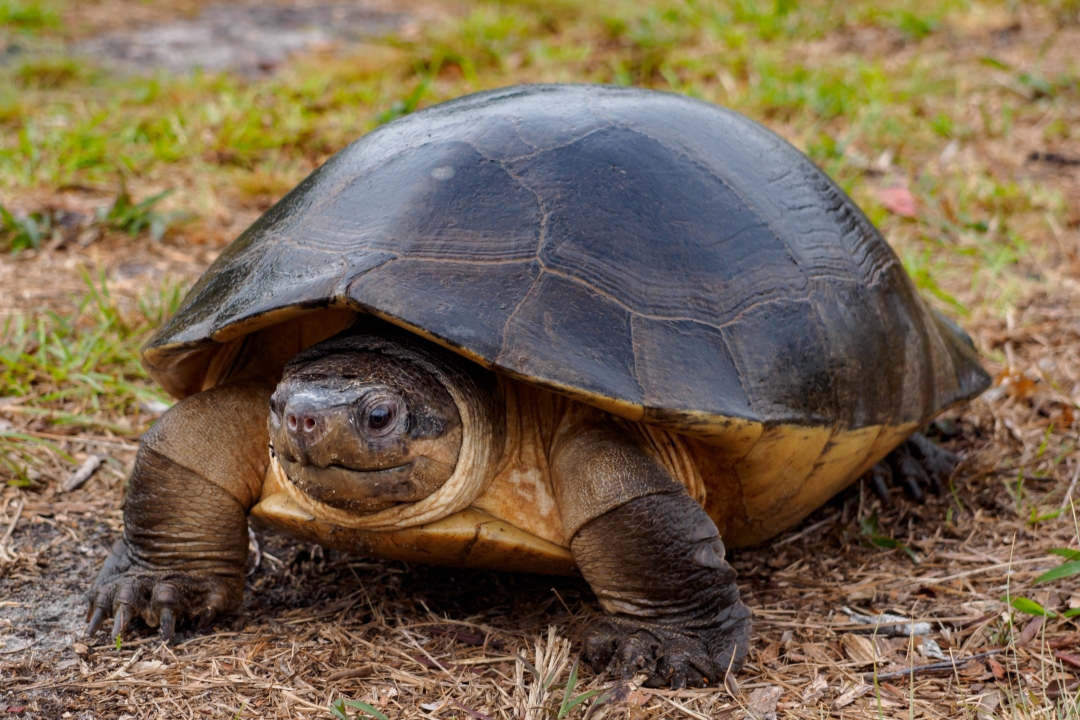 Commonly known as the Bornean River Turtle, it is mainly found near coastal riverine environments from roughly Kuching westwards and south along Kalimantan. By far the largest freshwater turtle in Southeast Asia, it inhabits large lakes, swamps, and slow-flowing rivers.

With a dark brown or black carapace of a smooth, oval shape and some 80cm in length, its plastron varies from yellowish brown to off white. Weighing up to 50kg, it has a very powerful head and strong jaws. Possessing large, webbed feet, which are paddle-like and with long, thick claws, adult male turtles have longer and thicker tails than females.

This turtle species rarely leaves the river other than to rest on sand or mud banks and is mostly piscivorous, supplementing its diet with fallen fruit and small invertebrates.

Scrambling out of a river, the female selects a sand or mud bank to scoop out a nest and will lay already fertilised hard-shelled eggs. She then scoops back the sand or mud to create a mound. Not a lot is known about how many eggs she may lay or the hatching times of the young turtles.

The hatchlings are left to break through their capsules and waddle their way into the river thus fending for themselves and totally independent from birth. The sex of the hatchlings is actually determined by the ambient temperature at the very time of their birth. Sadly, with such, initially, soft shells, they are immediate prey for riverine monkeys and scavenging birds. Yet those that do survive may live up to 100 years of age or more.

Despite its classification as a Critically Endangered species on the Red List of the IUCN and its protection by law in Sarawak and Kalimantan, the Malaysian giant turtle remains a species which is smuggled in high numbers from Indonesia. It is exported for its highly prized flesh and for the Chinese medicinal trade.

Malaysian fishermen often find drowned turtles entangled in their nets or else caught as they try to eat the bait off fishing hooks. Marine Preservation Areas may be the answer to secure the future of these truly critically endangered turtles.

Certainly, more zoological research is needed on these wonders of our world with studies of breeding patterns, numbers, and the tagging of their shells for they may be here today, but they may not be around tomorrow and not in the wild but in zoos and aquaria!