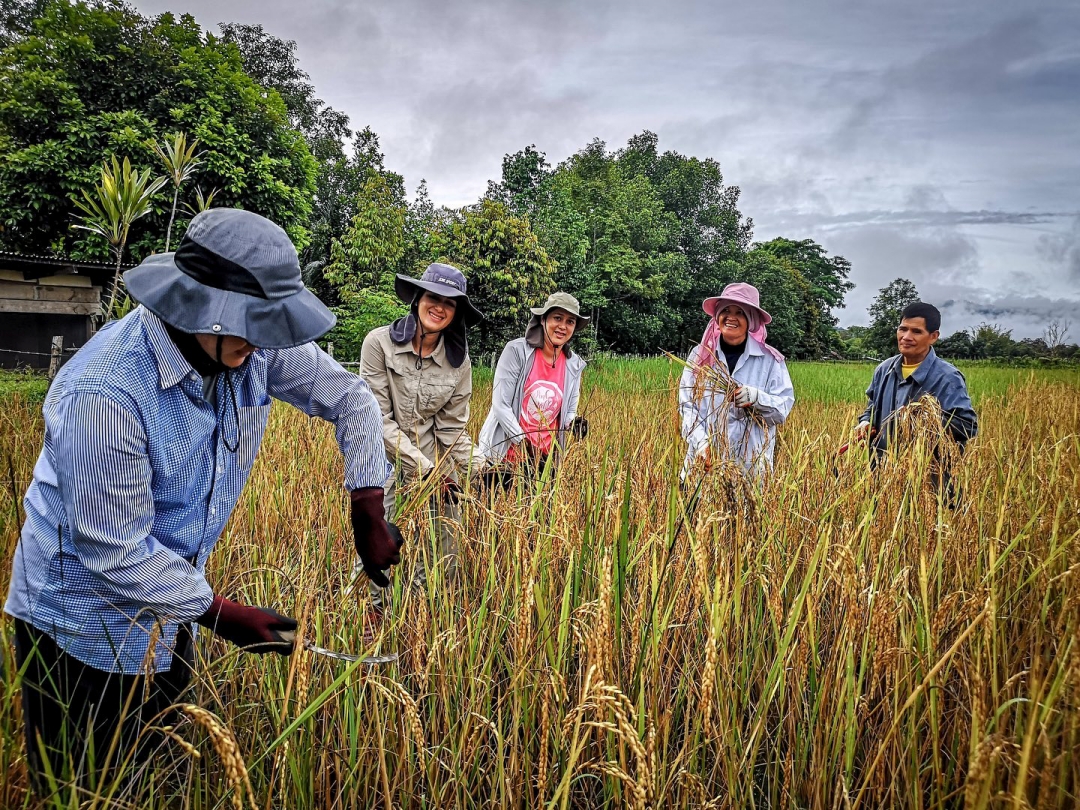 The rice farmers of Long Semadoh at work during the harvesting season.

IT is undeniable that Sarawak and Sabah hold rich historical and cultural significances, and are blessed with an abundance of resources, especially in agriculture.

However, when it comes to socio-economic progress in the rural areas, it is still not up to expectations as many rural communities in these two states still do not have access to facilities such as good transportation and logistics, and are likely to experience unfair pricing.

The situation leaves the rural farmers having to make do on an unreliable stream of income, says Melisa Lim, who is a co-founder of social enterprise Langit Collective.

According to her, the majority of the families living in the rural parts of Sabah and Sarawak rely on small-scale farming activities to sustain their livelihoods.

In this regard, addressing the challenges faced by the rural communities by helping the smallholder farmers develop a sustainable economic ecosystem and also providing them with the means and access to sell their produce to a wider market, becomes Langit Collective’s mission statement. 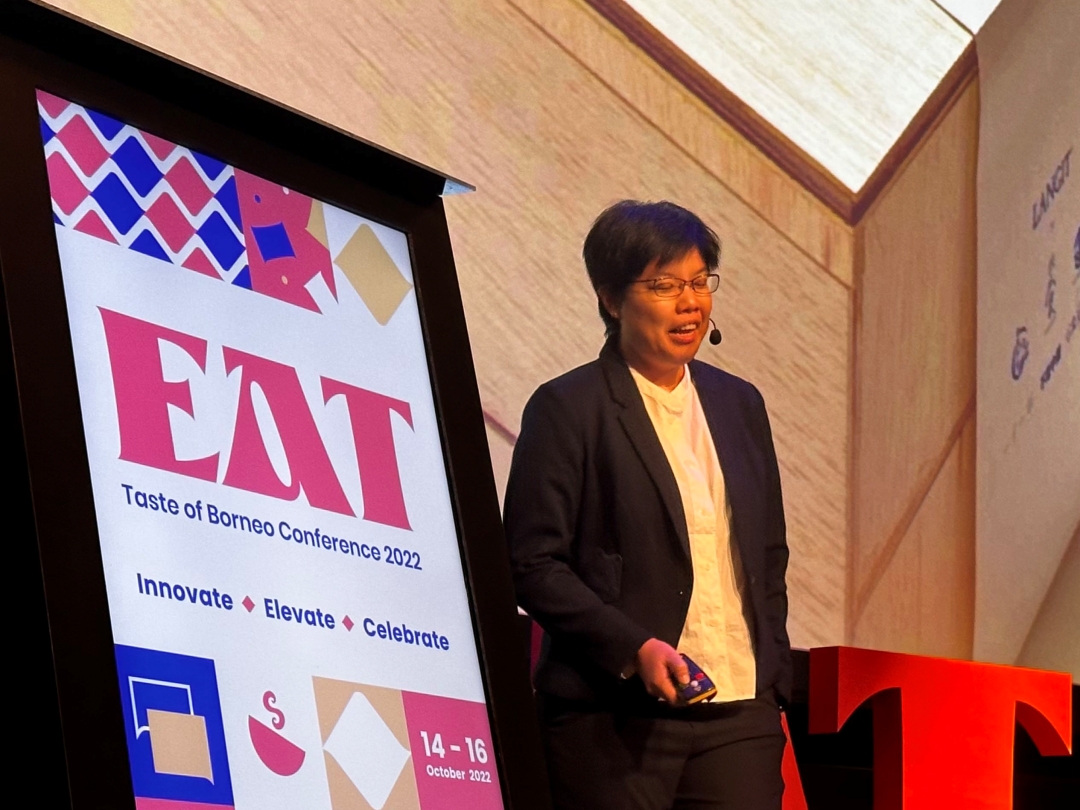 Lim during her session at E.A.T. 2022 Conference, sharing Langit’s vision and mission with the participants.

Its establishment was realised after the four met during a non-governmental organisation (NGO) programme that was carried out in East Malaysia.

Under this NGO project, they travelled extensively into many rural areas in Sabah and Sarawak where they helped build gravity-fed water supply systems for the communities there.

Having lived with the rural folks and established familial bonds with them during the course of the programme, the four experienced the plight and the challenges that these communities faced.

The whole journey compelled the four to tap deeper into their potential to help these communities.

“In the first few years after the inception of Langit, we had worked closely with the rice farmers in Long Semadoh, Sarawak towards solving one of the major issues that they faced – having excess produce that could not be sold due to their remote location.

“What we did was procuring the excess rice from them at a fair price, turning this into a source of new income for the smallholder farmers.

“Such exercise helped them gain access to new markets.

“From there, we (Langit) would reinvest the proceeds (from the sales) into arranging capacity-building courses for the farmers for them to achieve sustainable farming practices that would still complement the traditional wisdom,” she told thesundaypost when met at the inaugural ‘E.A.T: Taste of Borneo Conference 2022’ held in Borneo Convention Centre Kuching (BCCK) recently, where she was invited to deliver a presentation on ‘Empowering Rural Communities’.

She added that with a newfound goal set in course, they pursued a path to help improve the livelihood of rural communities through good agricultural practices and sustainable entrepreneurship education.

One another note, she also said Ling was no longer with Langit as he had gone on to a new path.

Langit’s subsequent involvement in the livelihoods of the farmers through the introduction and promotion of heirloom rice and grain varieties, many of which are still unknown to public, is now reaping a bountiful yield in the form of a dedicated group of followers comprising discerning consumers and chefs who recognise and appreciate the ‘planet-first’ efforts for health and nutritiously-grown produce.

The progress outcome of their mission to build rural communities’ resilience through regenerative agriculture has also netted in an encouraging prospect that is able to expand.

“The success of this venture has allowed us to broaden our farming partnerships beyond Long Semadoh, so as to also include farmers of other produce who practice the similar philosophy in caring and managing their land and crops,” said Lim.

Langit later approached a blackpepper farmer in Sarawak and ginger farmers in Sabah, asking them to ‘join the family’.

Riduan Jawen – or ‘Silan’ to his fellow villagers – a Bidayuh farmer based in Serian stands as one of Langit’s prime example of its extension towards small-scale producers.

“Being one of Sarawak’s famous ‘Lada (Pepper) Kuching’ farmers since the age of 19, Silan is a second-generation farmer whose single-variety pepper trees are located on the slopes of a mountain.

“In his first year of harvesting chemical-and-pesticide-free peppercorns, he was able to increase his income by 100 per cent. With him, we’re able to bring out an authentic taste of pepper to consumers around Malaysia. 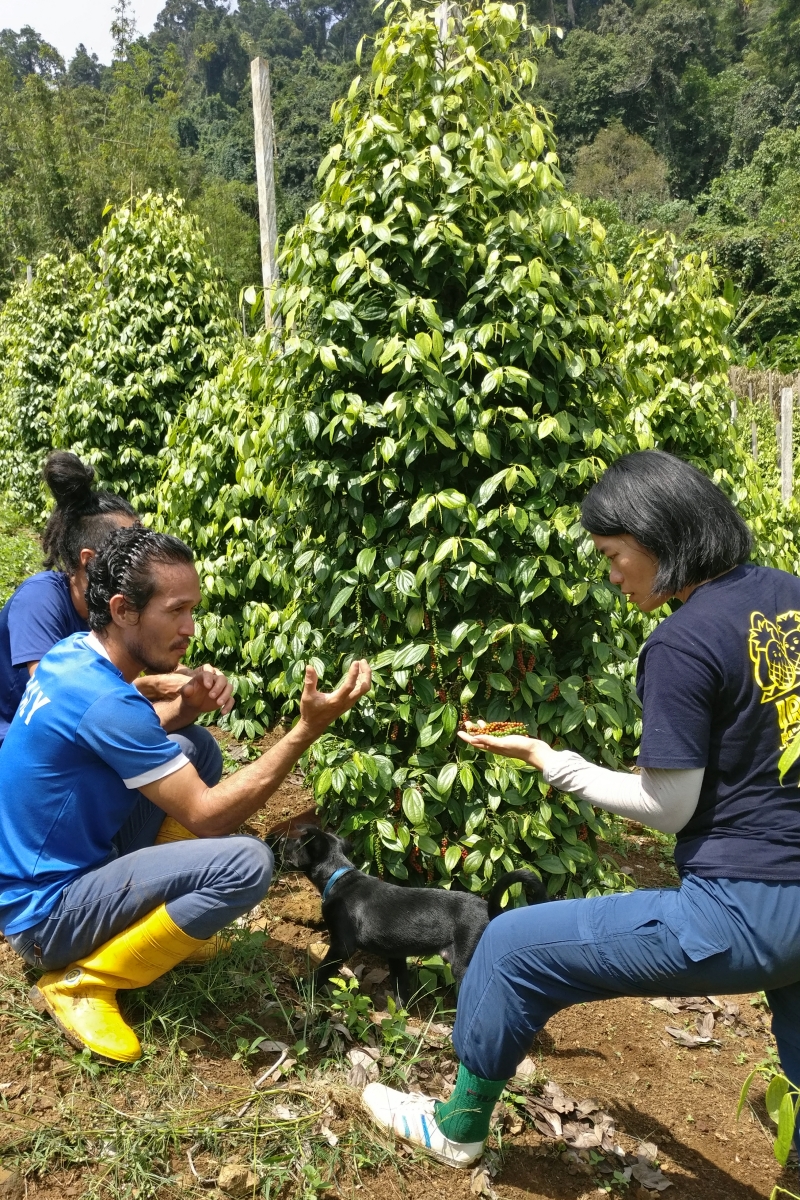 Silan (left) explaining to Chen a few things about his pepper farming in Serian.

“Today, we are still experimenting with Silan, and trying out several regenerative methods for pepper farming, (different) from the rigid conventional practices,” shared Lim.

“Having inherited their land from the generations before, they are continuously pushing the envelope with regard to chemical-free farming, on the aspiration of doing better.

“A fun part about them during procurement season is that they would also create micro-jobs within their community. So they are able to hire folks they know to contribute during the ginger processing season. The benefits will only add on within the community,” Lim said during her presentation, while showing a slide on Langit’s ‘Value Chain Impact’.

According to her, despite not fitting the typical narrative of big agriculture, smallholders like Silan, Yulian and Marianeh are a measure of a sustainable stepping stone towards an ecologically-driven economy that is inclusive, and also equitable to the concept of ‘by the community, for the community’.

“Although favouring individualised solutions may be more time-consuming, it’s able to build the context of the community and their environment; it builds relevant capabilities that are immediately applicable and highly contributing to the long-term sustainability of a community’s food security,” said Lim.

In the beginning, Lim said the ideation behind Langit was not one that many people could empathise with.

“We had a lot of naysayers who were projecting our failure. But that aside, we also gained many strong supporters who believed in the vision of an equitable future, and they continue to walk alongside us as we grow,” she said.

She said as seven years ago, the awareness of high quality local produce was not as mature as it is today, and in this regard, the process to break consumer’s bias with pricing and quality was a hard challenge for them.

“It took a lot of time and courage to break this myth: that locally grown and produced products must be cheap. We continue to create awareness and education around this premise until today.

“There hasn’t been a lot of conversation revolving around regenerative agriculture; back then, it was mostly high-tech stuff and how we superseded to make things faster.

“Moving towards a chemical-free food future, we went out to look for answers around the region (Asean), and so we brought in ideas that we gained from there that could be melded with the community’s traditional farming methods,” said Lim.

Outlining another adversity faced in the early stages of Langit, Lim said they would often run into roadblocks upon discovering the need of applying multiple licences in adherence to local legislations in relation to logistics.

Still, she regarded the lack in the supply chain’s efficiency and the complex red tapes to navigate around the problem as among the most persistent issues still experienced by the Langit team.

“Due to the remoteness of our farmers’ locations, logistics are more costly and time-consuming aspects, affecting our ‘speed’ to the market.

“When it comes to cost-effectiveness, it’s definitely not the case for small set-ups like ours.

“As regulations are complex, not integrated and sometimes without clear SOPs (standard operating procedures), this (logistics) has been our greatest challenge since the beginning.

“It’s something that we have to learn the hard way, through trials and errors, throughout the different points of our growth,” said Lim. 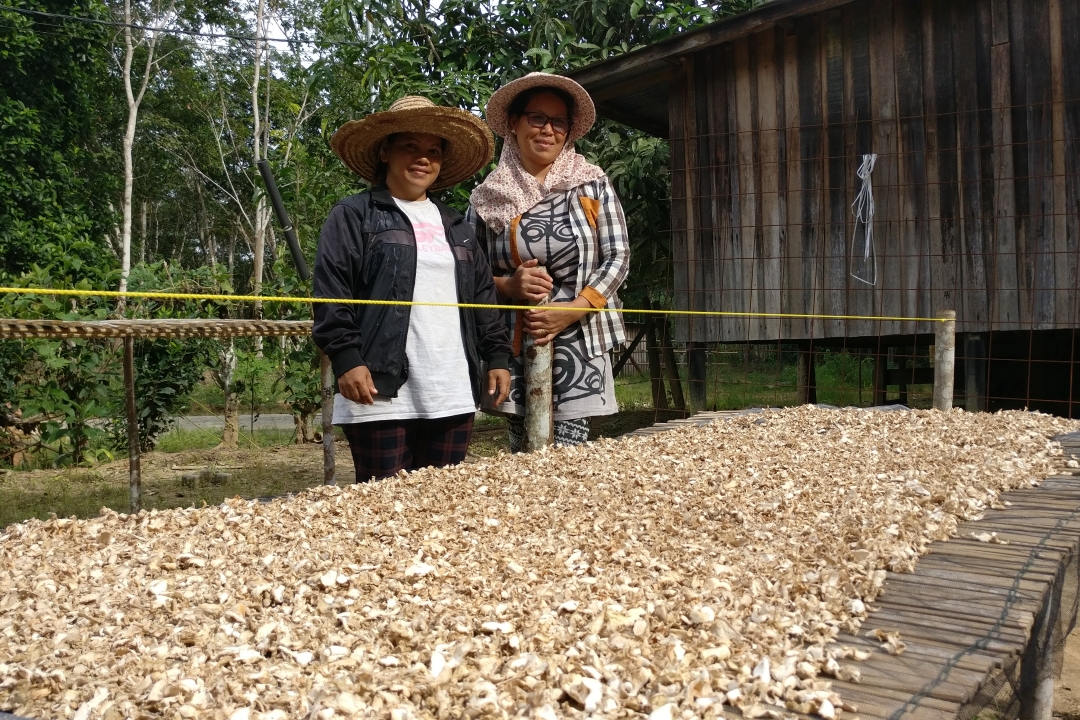 As an impact-driven social enterprise, Langit was founded to help ‘friends from the rural areas’ sell excess harvested rice that, in turn, provided them with a more viable income stream, and this exercise has visibly evolved to enable it to extend assistance to other smallholder farmers in Sarawak and Sabah.

This tiny motivation has grown in size and intensity in the face of the unchecked commoditisation of natural resources for maximum profits, uprooting the work and livelihoods of hardworking individuals and communities like Langit’s farmer-partners, who now aim for self-sufficiency and environmental responsibility.

Among the milestones achieved by Langit is the development of Long Semadoh’s Community Rice Milling Centre.

“It took seven years for us to get here – all thanks to the development grant that we’ve obtained from the United Nations Development Programme (UNDP), The Gef Small Grants Programme, Yayasan Hartanah, and Malaysian Global Innovation and Creativity Centre (MaGic).

“Upon completion, this centre would serve as a centralised facility to mill rice of the highest quality and at the same time, it would help reduce loss and wastage for farmers.

“All these would lead to a higher income rate. This would also create at least five new job opportunities for locals,” said Lim.

Adding on, she said this centre could also serve as a hosting area, or ‘an experience centre’, for visitors to learn more about Long Semadoh’s rice, as well as the culture and livelihood of the locals.

On the subject of milestones, Lim said Langit had brought forth a new initiative called ‘Foodprints’, meant to help consumers understand the origins, features and producers of the products better.

Simply by scanning any product’s QR code, a user would gain access to all the information about that very product.

This system, as means to educate consumers with the right knowledge and information, subsequently empowers the farmers who produce the products.

Still on rural community empowerment, Lim said Langit would never shy away to work with or partner up alongside like-minded individuals, companies or communities who shared the same vision and mission towards the social enterprise’s goal.

“For me, it’s when we are able to bring farmers out to experience the extent of where their humble products have gone – at the retail shops and the reputable restaurants around Kuala Lumpur – it’s affirmation that they produce high-quality products that are not just another ‘produk kampung’ (village products),” said Lim.

Langit is currently working with 80 farmers in three communities, from nine different villages, with the direct payouts to these farmers amounting to US$150,000 (RM707,760).

The Borneo Post was the official media partner for E.A.T: Taste of Borneo Conference 2022.

Previous ArticleA rose, by any other name…
Next Article Impact of Undi18 voters uncertain as many will find it hard to return, says SUPP man