Wednesday, December 7
You are at:Home»Business»BizHive»Asean: Resilience in a sea of uncertainty

DESPITE macro headwinds, we believe Asean equities can be a source of resilience for your portfolio in the years ahead.

Asean economic data has remained robust thus far, and we expect growth for the region to remain resilient entering 2023, amidst the ongoing regional reopening and recovery.

Asean inflation has climbed significantly and will necessitate some tightening of monetary policy.

However, we expect Asean inflation to remain milder than major markets helped by structural factors, and this should lead to a comparatively less hawkish response from Asean central banks.

Earnings estimates continue to remain near historical lows, at levels seen during periods of severe market downturns, and we believe there is limited downside to earnings given the reopening ahead.

Asean equities are trading at a slight valuation discount to their historical average, and we see a solid 31 per cent potential upside by FY24.

In our previous article on Asean equities, we expressed optimism regarding Asean equities driven by the regional wave of reopening, but remain cautious on the back of the weakening macro environment.

Since then, Asean equities (gauged by the MSCI AC Asean Index) have declined but still held up reasonably well amidst these headwinds.

In this article, we reiterate our optimistic view on Asean equities, especially within the broader Asian equity region, and believe they could be a source of resiliency for your portfolio in the years ahead. 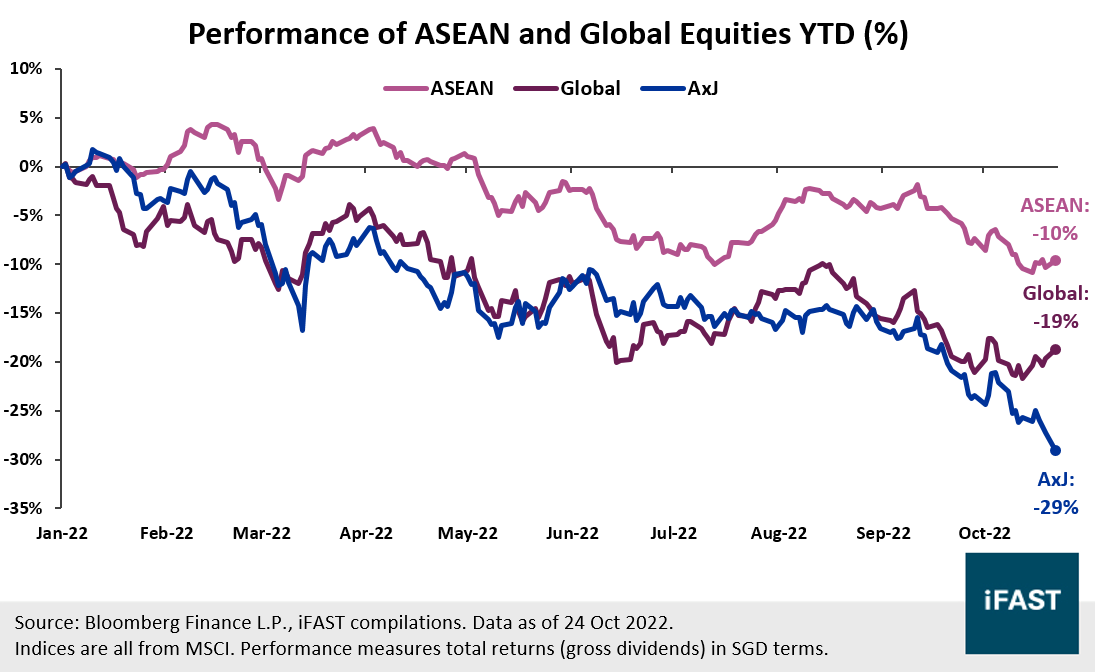 Asean equities have held up reasonably well relative to peers. 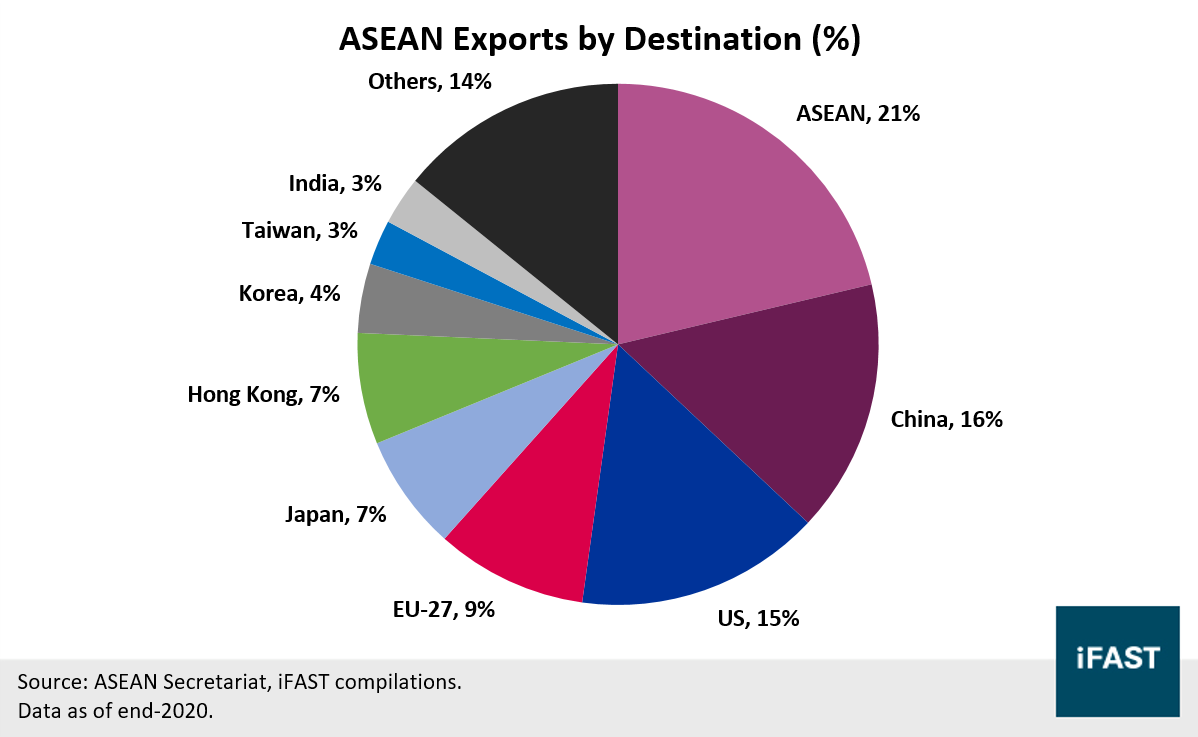 Asean mainly exports within Asia (and especially within Asean).

Asean has traditionally been an export-reliant bloc, and its economies are not immune to this global growth slowdown, particularly in Western DMs where the risk of a recession grows.

However, for the bloc, the largest trading partners are situated within Asia, with intra-Asean trade accounting for over 20 per cent of exports.

This makes Asean relatively more exposed to the demand backdrop in Asia, rather than that in the US and Europe.

With Asian demand supported by the recent re-opening wave, domestic recovery, and milder inflation headwinds relative to the West, we believe this Asia-focused export mix should help to provide some support for Asean economies when demand from the West falls.

Economic data remains robust despite macro headwinds, with Asean Manufacturing PMI ticking higher, contrasting with its North Asian (China and Korea) and global peers which saw their PMI dip below 50.

In addition, export growth remains strong in Asean with key markets like Singapore, Indonesia, and Malaysia showing double-digit growth (y-o-y) for over 12 consecutive months. These findings suggest that growth in Asean continues to remain resilient on the back of a domestic recovery and regional reopening tailwinds.

To be clear, we are not expecting economic data to continue strengthening over the next few months – it is more likely in our view that economic data will gradually soften over time on a global scale.

This is likely due to the global growth slowdown, and the high-base effects of the recovery.

However, on balance, we expect the Asean economy to continue growing over the next year, albeit at a slower pace compared to the previous year, alongside the weakening global economy. 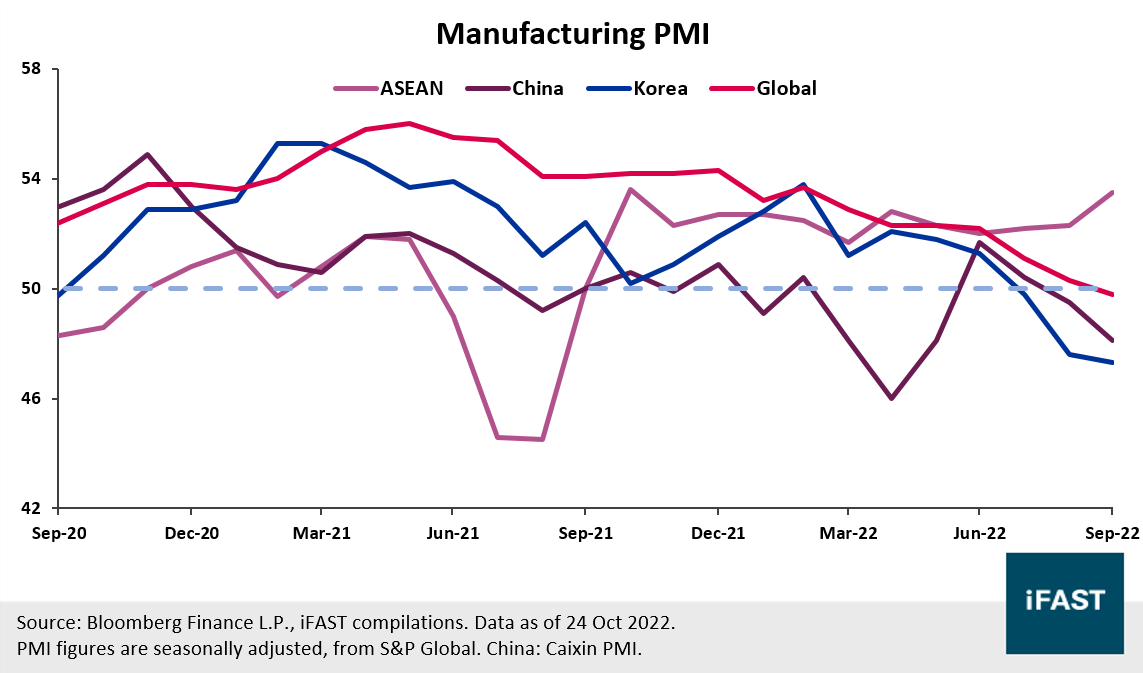 Asean Manufacturing PMI has continued to tick upwards above 50, diverging from peers. 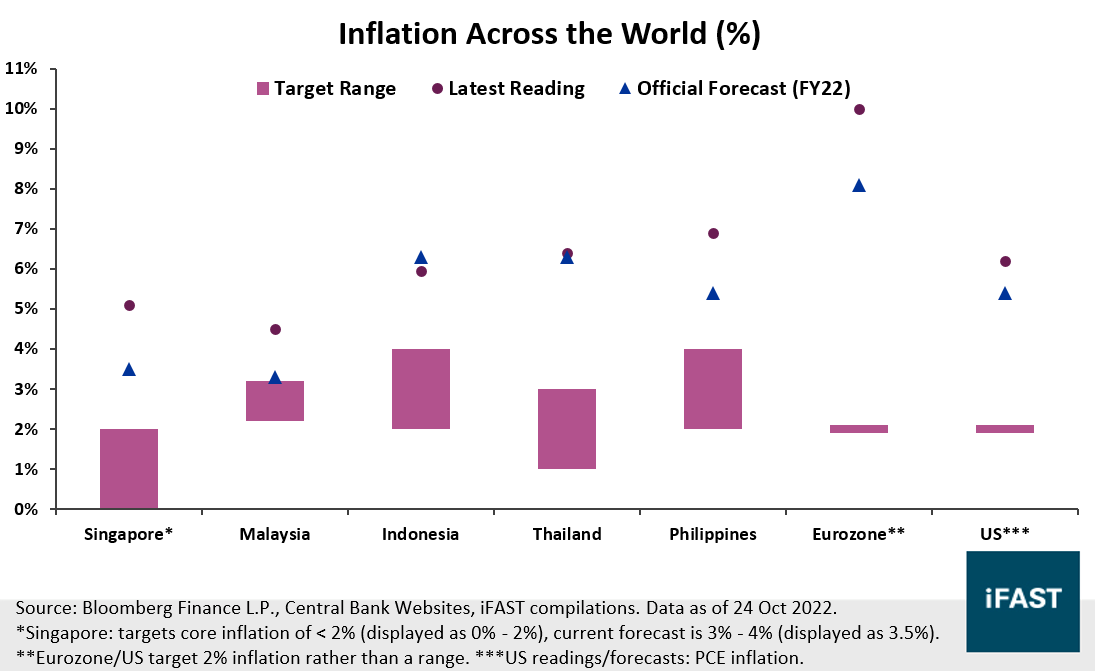 Asean inflation has gone above-target inflation, but to a smaller extent than Western DM peers.

Nonetheless, we believe that policymakers will be able to rein in inflation, likely in a drawn-out attempt over 2023.

One structural reason for relatively milder inflation in Asean is the large number of price controls within the region for both food and energy. This has been supplemented by other policies by individual governments, such as Malaysia’s export ban on chicken and eggs, or Indonesia’s export ban on palm oil.

On top of the larger number of price controls, Asean is also less exposed to idiosyncratic headwinds faced by regions like Europe, which has seen a surge in energy inflation arising from their tensions with Russia.

While we believe Asean inflation will remain at elevated levels, comparatively it should be milder than many major markets such as the US and Europe.

This implies that the likelihood of jumbo-sized rate hikes (similar to what we’ve seen in the US with consecutive 75bps hikes) should remain low and thus, we expect a less hawkish response from Asean central banks which should be less damaging to the region’s growth and equity performances.

Limited downside to Asean equity earnings even in a slowdown scenario

In our previous article, we noted that Asean earnings lagged behind other major markets due to pandemic headwinds, and expressed our belief that earnings will catch up as these pandemic uncertainties fade with the regional reopening. We continue to stick with this view and expect milder downsides for Asean earnings ahead.

This crash in earnings per share (EPS) estimates implies heavily that significant negativity has already been priced in. This is further reinforced by our belief that Asean is likely to continue benefiting from some reopening tailwinds, which may buffer against further earnings downgrades in 2022.

As such, we believe the market position, earnings and balance sheet strength should provide added resiliency in the slowing macro environment.

To summarise, we remain cautiously optimistic on Asean equities.

We believe the Asean economy can remain resilient amidst an incoming slowdown, something that major markets like the US and Europe may struggle to do so.

Furthermore, Asean earnings have already priced in significant negativity so far this year, and we believe there are lesser downside risks for these earnings moving ahead.

Previous ArticleOPR: Up, up and away into 2023
Next Article Ask and We WILL Answer