Saturday, December 3
You are at:Home»Features»Giving beadworks collectors their money’s worth 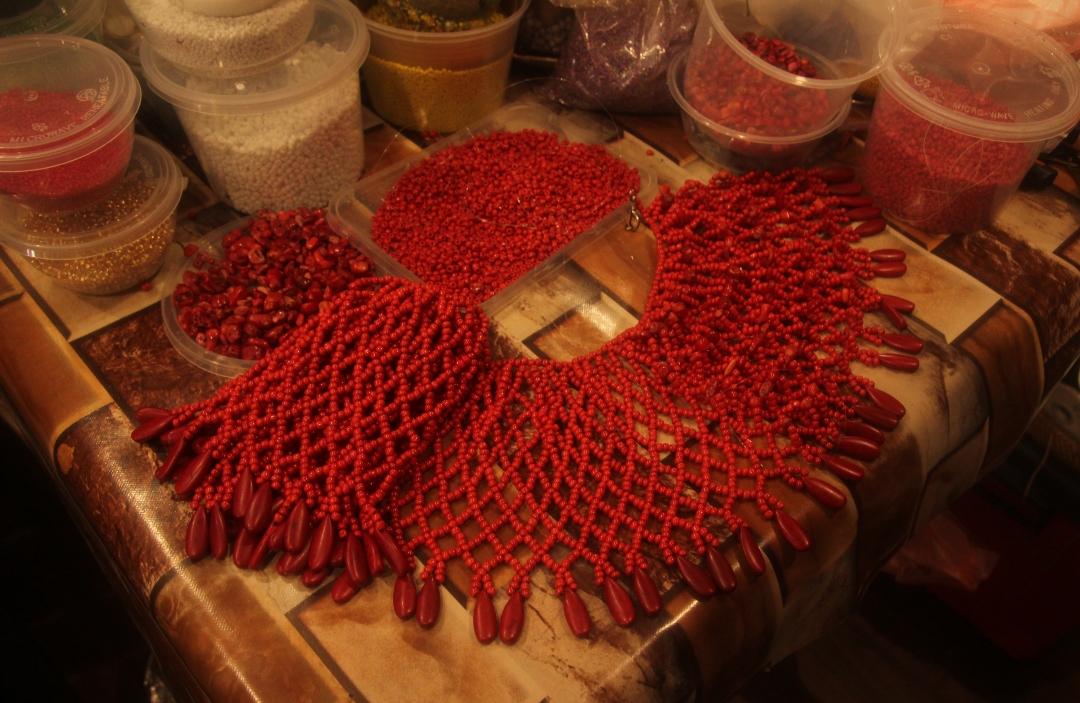 Juliana’s modernised ‘marik empang’ in the making at her shop, at Carpenter’s Street in Kuching.

ENTREPRENEUR Juliana Embrose took on the challenge of starting her own business 15 years ago, armed with years of working experience in the handicraft industry, as well as her beading skills and passion for the art.

She began by renting a small space at the Textile Museum, an art gallery showcasing authentic ethnic textiles from Sarawak that is housed in The Pavilion, a historical building from the colonial era.

The Pavilion, being part of Kuching Heritage Trail, is a tourist attraction itself.

With the tourist market in mind, Juliana was confident that it was an ideal place to build up her small business. She had just left a long-time job at an antique and handicraft shop. The owner, seeing her potential and passion, had motivated her to start her own business.

“He even gave me three months’ salary when I resigned for the purpose of starting my small business at the Textile Museum, as inspired by him. I used the money to buy raw materials,” she recalled how she was emboldened to venture into the business world. 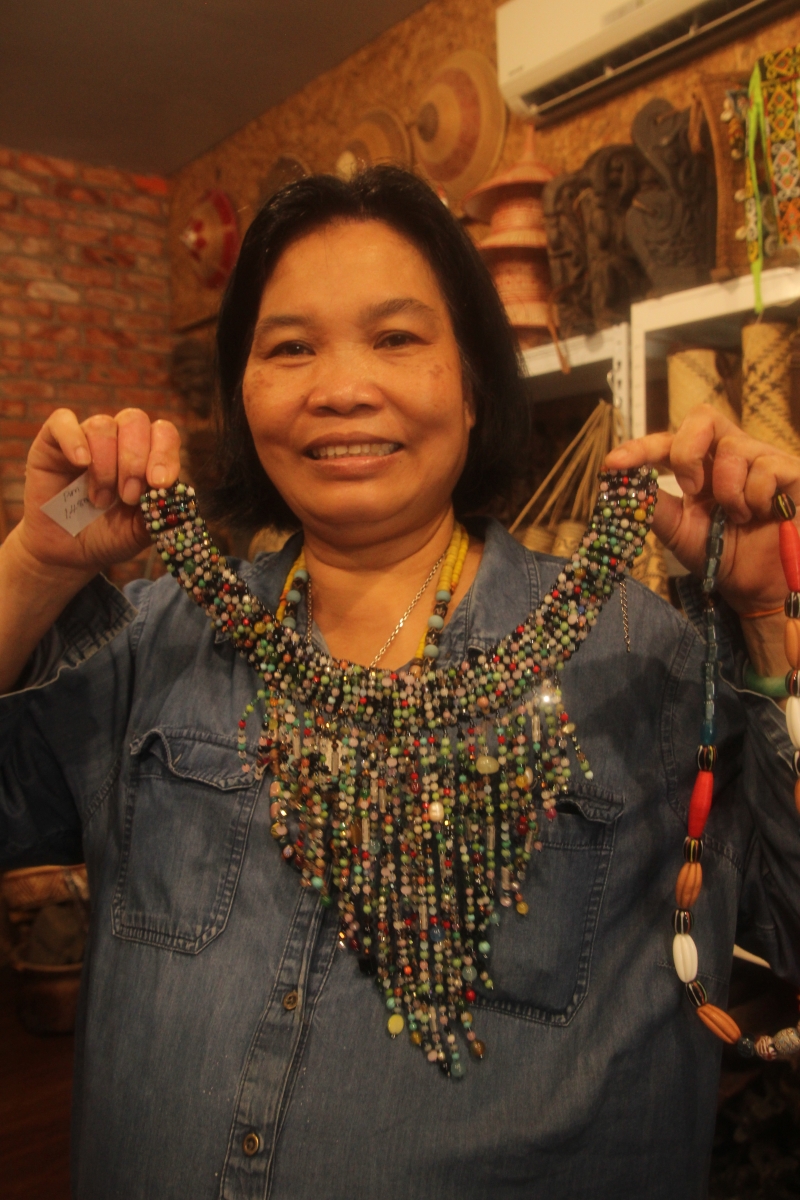 Juliana shows one of her finished products, an intricately-designed bead necklace.

Being on her own fuelled her creativity, particularly in beading, as she attempted to sell her work to both local and tourist bead collectors. However, the museum’s business did not appear to be going well. Most of the time, sales in the handicraft industry and her beading were slow.

Somehow, she was able to keep her business going by participating in organised events where entrepreneurs like her could display and sell their products. The events were held to promote local handicrafts and textiles in support of the industry.

Being passionate about beads, Juliana was determined to keep the business running and she proved to be competitive and capable. She had been operating at the Textile Museum for 10 years when she decided to expand her business.

Consequently, she rented the ground floor of an old shop at Carpenter’s Street and became the only Bidayuh entrepreneur to open a native handicraft and bead accessory shop in the tourist belt.

Today, it has been five years since she first moved there. Her items have increased several folds.

“Business is picking up. I have native handicrafts, basketry and textiles added to my beadworks,” said the proud owner of Juliana Native Handwork.

Main Bazaar, the city’s oldest street, runs parallel to Carpenter Street. The quaint-looking rows of shops with histories dating back to the 19th century in Kuching’s old town have become a popular thoroughfare for souvenir hunters among both local and foreign tourists.

The market can be competitive, especially when there are many people selling the same items at different prices in the same location.

“Some of the handiworks in the various shops look similar, but the workmanship and quality may not be the same; hence, the difference in prices.

“As for me, I’m committed to conserving the art of beading and the value of the beads and so my price tags are usually a little higher, but reasonable,” said Juliana.

As a beads lover and dealer, Juliana feels that she belongs to the tourist belt, aware of the fact that Sarawak is the only state in the country, besides Sabah, that is rich with beads because of its multi-ethnic bead culture.

The tourist market in the old part of the city provides a good setting for her to promote her beads and indeed, she has grabbed the opportunity albeit the stiff competition.

“I design and make most of the bead accessories myself while the native hats, baskets and textiles are from the suppliers. I have regular customers who know what I’m doing and they just keep coming back either for bead restringing or redesigning, or to see what’s new on my shelf,” she said.

A life member of the Society Atelier Sarawak, which is an arts and craft society, Juliana feels called to conserve the beauty of the art. The quality of the material used, design, workmanship and pricing matter a lot to her and she finds satisfaction in giving her customers their money’s worth.

In the long run, she has gained a good following at home and abroad.

Juliana’s ‘marik empang’ (beaded collar necklace) was worn by models on the international catwalk as they paraded outfits from Edric Ong’s collection during the ‘Fashion LFW Spring Summer 2023’ season held in London recently. 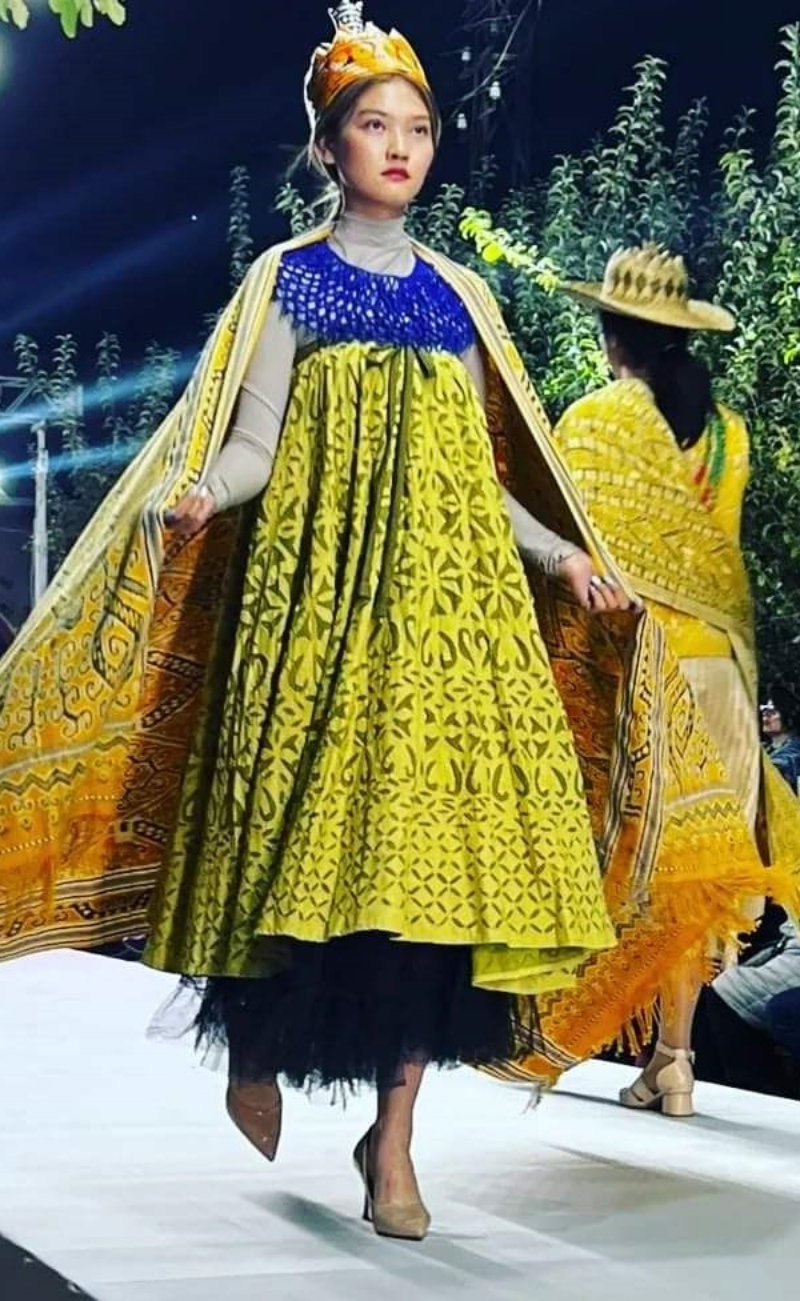 A model wearing Juliana’s beaded collar necklace while modelling an outfit from Edric Ong’s collection on the catwalk at the Fashion LFW Spring Summer 2023 season, held in London.

The accomplished fashion designer, who is also the president of Atelier Sarawak, has always been supportive of Juliana’s work. Whenever he goes overseas to promote Sarawak arts and crafts, he brings with him Juliana’s bead accessories with her label attached, and they sell very well at the foreign market.

“I’m in touch with collectors from countries like Singapore and Australia, and also beads lovers in Peninsular Malaysia. They knew me through the organised events and some even knew me when I was still working in the antique and handicraft shop years ago.

“They have become my steady customers and some of them buy my stuff for sale,” she said. 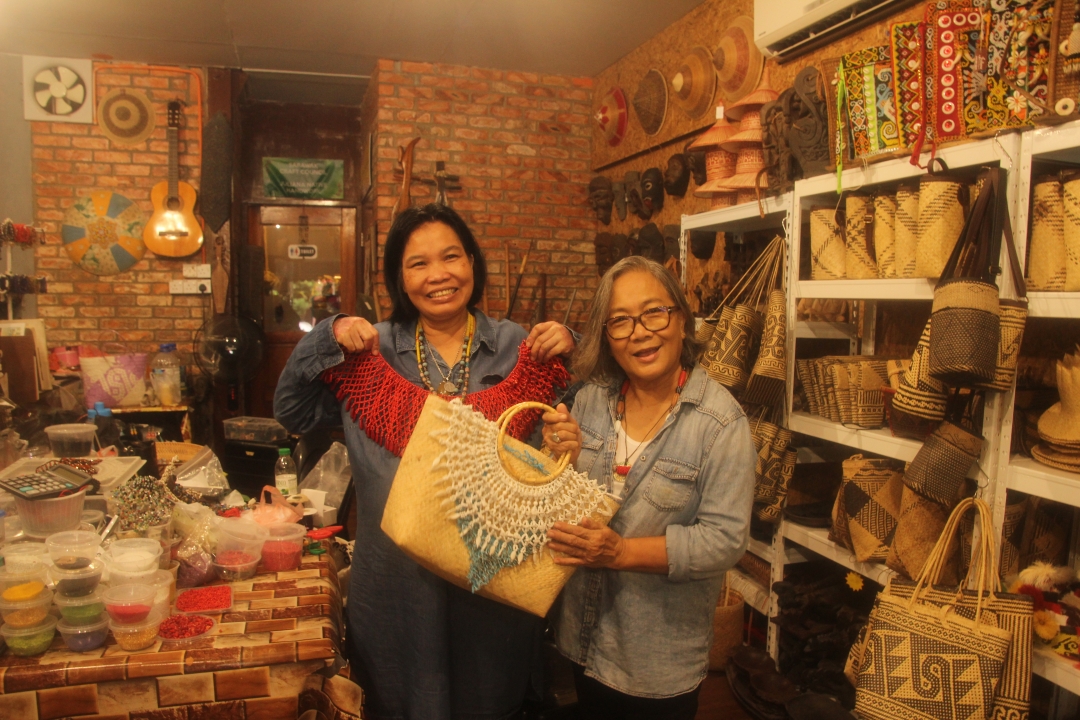 Juliana (left) holds a modernised ‘marik empang’, as the writer admires her work.

Juliana has turned her passion and skill into a money-making activity. The enterprising businesswoman, who hails from Kampung Bundak in Siburan, learned the art of beading from her maternal grandmother and it got better when she practised her skill at the antique and handicraft shop restringing and redesigning beads for clients.

She is not in the bead business by chance. She grew up in the bead culture and inherited her grandmother’s skill. When she was younger, she did not have the capital to start her own business. She ahd worked in the antique shop at Main Bazaar for 20 years, and the rest is history.

“As a Bidayuh steeped in tradition, my grandmother had a personal collection of antique beads. She knew I loved beads since I was small. Seeing that I inherited her skill in beading, she passed down her whole collection of traditional beads to me, instead of my mother,” she recounted.

As a matter of course, Juliana is now the custodian of her grandmother’s precious possessions.

“Most of the antique beads are not for sale. They’re precious possessions, but I have already decided on which of the beads to give to the museum and my children, respectively, before I leave this world,” she confided. 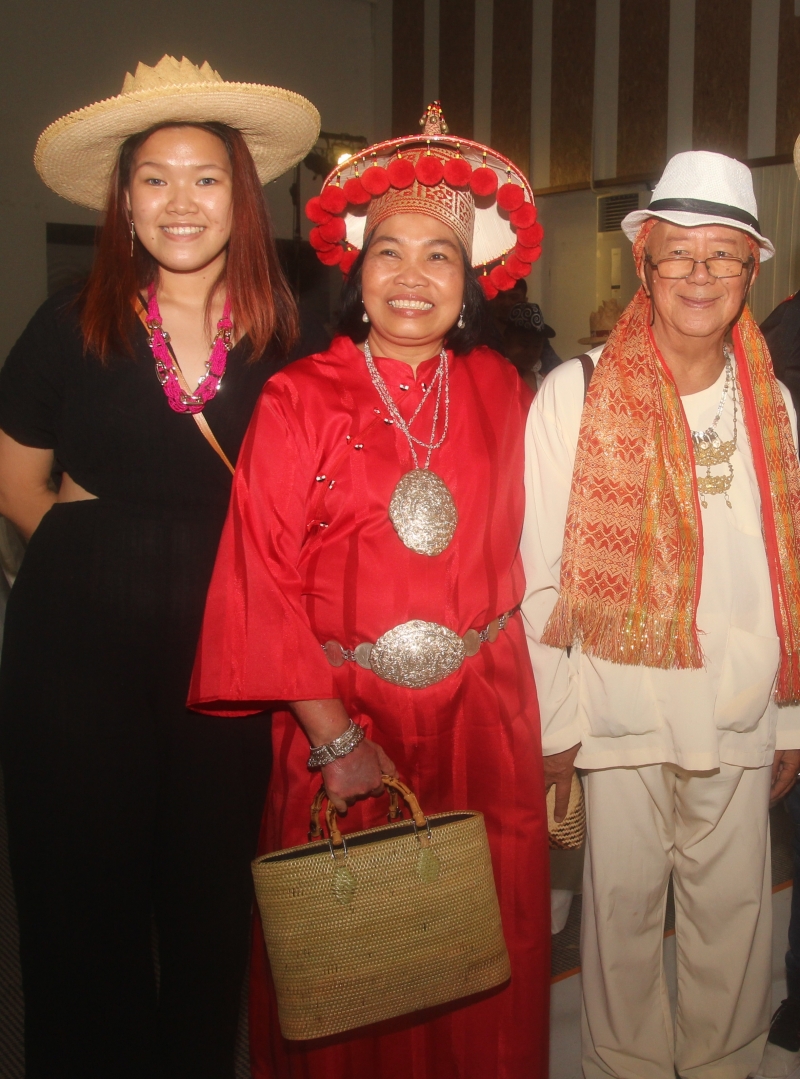 Juliana, flanked by her daughter and renowned artist Ramsay Ong.

She even has decided on which beads to bring to the grave in line with her custom.

A true bead aficionado, she wants her antique beads to be in the right hand. She is confident that her two children will be good custodians of her beads.

Juliana’s daughter and son both inherit her passion and skill, and they are very supportive of their mother’s work.

“You need to have custodians for antiques,” she said. “If we had no confidence in our children to look after them for lack of interest, it’s worthwhile to put them in the museum.

“In my case, I just want to share some of my beads with the museum so that when people come around, they would know who once owned such beads in Sarawak.

“They’re my small contribution to the state.”

Some of the jewellery items sold in Juliana’s shop are made of her grandmother’s beads.

“Actually, I prefer to sell the ones made from antique beads to the locals so that we can still have them around and not having them brought out of the country.

“However, the Westerners are the ones who buy most of my items,” she said.

Juliana’s hard work, patience, determination and unrelenting efforts in keeping up with what she had started at the Textile Museum 15 years ago has brought her this far.

Indeed, it was a life-changing decision when she took the challenge to venture into the business world, one that could not possibly happen had she chosen to remain complacent with her last monthly paycheque of RM1,200 – her first was RM350 a month.

Juliana greets her customers with confidence. Beads lovers and souvenir hunters can rest assured that they will get to know the designer and beader herself.

Personalisation certainly adds value to the items that they purchase.