Monday, November 28
You are at:Home»World»Biden and Xi reassure world but US, China still on collision course: experts 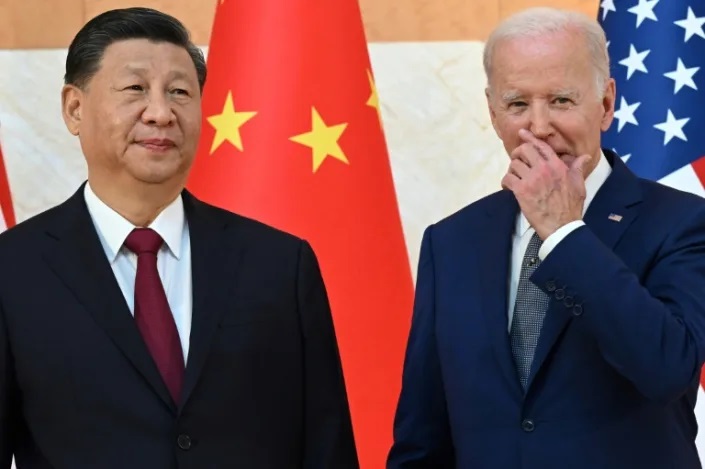 Biden and Xi were visiting for the Group of 20 summit, with host Indonesia inviting leaders of fellow Southeast Asian nations, several of which have maritime conflicts with China. – AFP photo

NUSA DUA, Indonesia (Nov 15): Presidents Joe Biden and Xi Jinping both sought to lower the temperature between the United States and China during a rare summit, but few analysts expect any deeper easing of tensions.

After three hours of talks in Bali, Biden said there need not be a new Cold War between the two powers and Xi told him that China was not challenging the international order.

The White House said that Secretary of State Antony Blinken would visit China, the first visit by the top US diplomat in more than four years.

Biden “sent a reassuring message and the Chinese readout was positively glowing. That in itself shows both sides’ interest in improving ties,” said Yun Sun, director the China program at the Stimson Center in Washington.

But beyond a shared hope to avoid worst-case scenarios and direct clashes, she said the two powers had very different views on what a more stable relationship means, especially on the flashpoint of Taiwan.

“If we expect this summit to miraculously rescue this relationship and restore it to a better place, I think we need to see more concrete actions,” she said.

Rui Zhong of the Wilson Center described the Bali summit as “maintenance work” and said even Blinken’s visit could wind up being more about “treading water” than breakthroughs.

Moreover, for the first in-person summit between the two nations’ presidents since 2019, each side had an interest in downplaying friction.

Biden and Xi were visiting for the Group of 20 summit, with host Indonesia inviting leaders of fellow Southeast Asian nations, several of which have maritime conflicts with China.

“For Xi, the perception of regional stability is still something that he would like to hold onto,” Zhong said. “China growing and throwing its weight around has been a longheld concern of the smaller states of Southeast Asia.”

“Xi gains nothing by coming off as excessively cold, inflexible and unnecessarily hawkish toward Biden, at least when face to face.”

For Biden, the most pressing diplomatic priority has been reining in Russia over its invasion of Ukraine and he has trumpeted what he sees as China’s wavering support for nominal ally Moscow, including a refusal to send weapons.

The White House said Xi agreed with Biden on “opposition to the use or threat of use of nuclear weapons in Ukraine,” a phrase absent in China’s statement.

Whatever their messaging to the world, both powers have deep suspicions of the other’s intentions.

The Biden administration, in a national security strategy released last month, called China the only power that could challenge US primacy and sought a focus on ensuring the United States preserves a “competitive edge,” including on new technology.

Deng Xiaoping, who spearheaded China’s modernization in the 1980s, famously said his country should “bide time” and focus on its rise rather than immediately challenging other powers.

US policymakers widely see China as newly assertive under Xi, the country’s most powerful leader in decades, who just secured a precedent-seeking third term.

Rush Doshi, a China advisor to Biden who took part in the Bali talks, wrote in a 2019 book while out of government that Xi saw historic opportunities due to what he viewed as Western decline, evidenced by the rise of Donald Trump, Britain’s exit from the European Union and the pandemic response.

China’s strategy involves “blunting and building efforts worldwide to displace the United States as the global leader,” he wrote.

– Taiwan flashpoint –
An area where the relationship could quickly deteriorate is Taiwan, the self-governing democracy claimed by Beijing that stirs passion on both sides.

Biden told reporters he understood that Xi would not launch an “imminent” invasion of Taiwan, but Xi again warned about supporting Taiwan’s “independence ”

China carried out major military exercises in August after a defiant visit to Taipei by House Speaker Nancy Pelosi, second in line to the presidency.

Republican Kevin McCarthy, who may become the next speaker as votes are counted from last week’s election, has made clear he would also visit Taiwan.

After Biden’s reassurances, Xi “might have a little more room not to overreact” to a McCarthy visit, Sun said.

“But even then, I doubt the Chinese can afford not to react harshly.” – AFP