Wednesday, February 8
You are at:Home»News»Sarawak»Explosion reported at Sabah-Sarawak Gas Pipeline in Lawas, one fatality
For the freshest news, join The Borneo Post's Telegram Channel and The Borneo Post on Newswav. 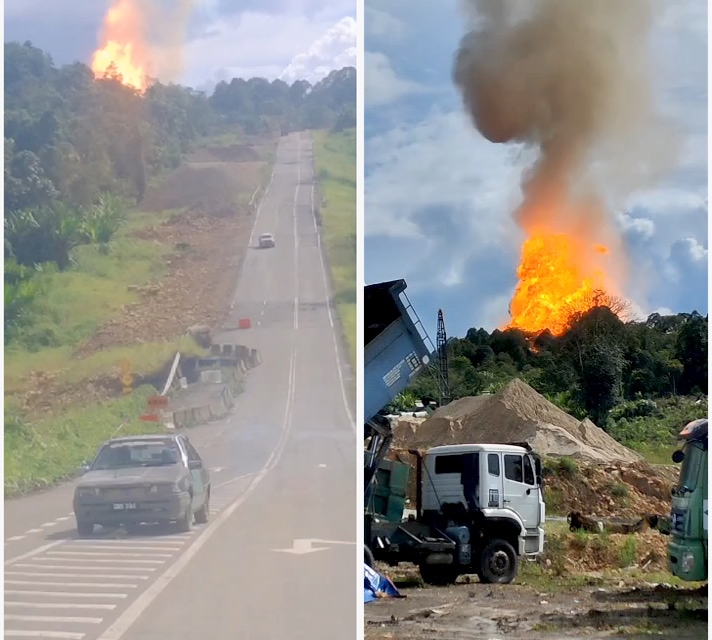 Unverified photos being shared on WhatsApp of the explosion.

MIRI (Nov 16): A man was killed and three others injured in an explosion at the Sabah-Sarawak Gas Pipeline (SSGP) in Lawas this afternoon, the latest in a series of explosions and leaks affecting the 500km long pipeline.

The body of the deceased, identified as Hadi Wiyono, was found in an excavator that was completely destroyed by the fire, which also scorched three other vehicles, the Fire and Rescue Department (Bomba) Sarawak operation centre said.
.
It said the radius of the fire near Berikau was about 400 meters. The fire could be seen from miles around, towering over the forest.

The department had received a report of the explosion at 2.49pm and firefighters were immediately dispatched.

In October, it was reported that Petronas had declared force majeure on supply to its liquefied natural gas (LNG) export facility due to a leak at the pipeline on Sept 21.

The explosion today is the first fatal incident at the SSGP.

Limbang Division disaster management committee and Resident, Sebi Abang, in a press conference, said the authorities including Bomba had gone to the site to investigate the cause of the explosion.

“Investigation is underway to ascertain the actual cause of the incident, whether it was due to soil movement or ongoing construction work of Sabah-Sarawak Link Road project in the area,” he said.

“Please refrain from making unfounded speculation on the incident that will cause unease among the community, especially during this election period.”

He urged the local community to stay calm and follow the safety protocol as briefed by Petronas.

“I am saddened (with loss of life and another injured) and this kind of incident should not have happened. The State Government expects Petronas to take every precaution to ensure that such incident do not recur in future,” he said.

He pointed out that Petronas had previously given the assurance that all necessary steps to ensure the pipeline’s safety following previous incidents.