Monday, January 30
You are at:Home»World»Dutch court convicts three, acquits one over MH17 downing
For the freshest news, join The Borneo Post's Telegram Channel and The Borneo Post on Newswav. 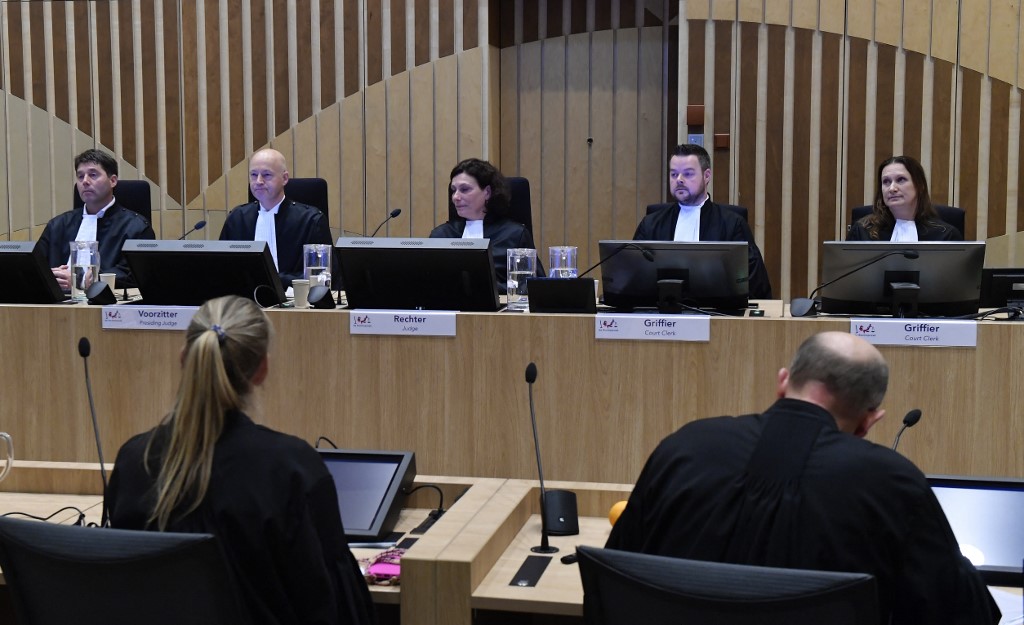 The court under the direction of President Steenhuis (second left) waits prior to verdict in the trial of four men prosecuted for their involvement in the MH17 downing case, in Badhoevedorp on November 17, 2022. – AFP photo

BADHOEVEDROP (Nov 17): A Dutch court convicted three men and acquitted one today over the downing of Malaysia Airlines flight MH17 above Ukraine in 2014, as tensions soar over Russia’s invasion eight years later.

The first three were sentenced to life imprisonment in absentia.

None of the suspects was at the high-security court in the Netherlands for the verdict, while dozens of families travelled around the world to hear the judgment after a two-and-a half-year trial.

All 298 passengers on board the Boeing 777 flying from Amsterdam to Kuala Lumpur were killed when the plane was hit by a missile, fired by what judges said were Russian-controlled separatists as it flew over eastern Ukraine.

Prosecutors have demanded life sentences for the suspects although the men are unlikely to serve time if convicted.

Piet Ploeg, chairman of the MH17 foundation, who lost his brother, sister-in-law and nephew, outside court told AFP he hoped the verdict could help families move on.

“I don’t believe in terms of closure — ask relatives who lost their children, you will never find closure for that. But I really hope that this day will give families some space to try to get on with their lives.”

Judges found Girkin, Dubinsky and Kharchenko could all be held responsible for the transport of the BUK missile from a military base in Russia and deploying it to the launch site — even if they did not pull the trigger.

There was not enough evidence to show that Pulatov, the only suspect to have legal representation during the trial, was involved, they said.

The court ruled there was “ample evidence” to show the plane was brought down by the missile, and that it was fired from a field in eastern Ukraine in an area controlled by the pro-Moscow Donetsk People’s Republic, which was fighting against Kyiv’s forces.

The court ruled out “alternative scenarios” suggested by the defence including Russia’s initial suggestion that a Ukrainian fighter jet could have been responsible.

Judges also found that the Donetsk People’s Republic was “under Russian federation control” at the time of the downing of MH17.

Russia however “still denies to this day” that it controlled the DPR at the time, meaning that the defendants could not claim immunity from prosecution as formal combatants, the judges said.

The trial represents the end of a long search for justice for the victims of MH17, who came from 10 countries, including 196 Dutch, 43 Malaysians and 38 Australians.

The crash triggered global outrage and sanctions against Moscow, with Ukraine’s famed sunflower fields littered with bodies and wreckage. Some victims, including children, were still strapped into their seats after the plane was blasted out of the sky.

Eight years later, the region where MH17 crashed has become one of the key battlegrounds in Russia’s nearly nine-month-old war in Ukraine.

The MH17 trial has meanwhile emerged as a something of a test case for efforts to bring perpetrators to justice over war crimes in Ukraine since 2014.

“The international community should hunt them down,” Evert van Zijtveld, who lost his daughter Frederique, 19, his son Robert-Jan, 18, and his parents-in-law, told AFP.

Prosecutors said Girkin, 51, a former Russian spy who became the so-called defence minister of the separatist Donetsk People’s Republic, was in regular contact with Russia.

Girkin recently criticised the Russian military over its handling of this year’s invasion and reportedly volunteered to fight in Ukraine.

Dubinsky, 60, who has also been tied to Russian intelligence, allegedly served as the separatists’ military intelligence chief and was responsible for giving orders about the missile.

The BUK missile had been identified as coming from the 53rd Anti-Aircraft Missile Brigade from Kursk in Russia, the court heard.

Moscow has denied all involvement in the crash. It has refused to extradite any of the suspects, saying it is illegal under Russian law.

The verdict comes against the backdrop of Russia’s invasion of Ukraine, which has sparked fears of a wider international war. – AFP