Monday, January 30
You are at:Home»World»N. Korea fires missile hours after warning of ‘fiercer’ military response
For the freshest news, join The Borneo Post's Telegram Channel and The Borneo Post on Newswav. 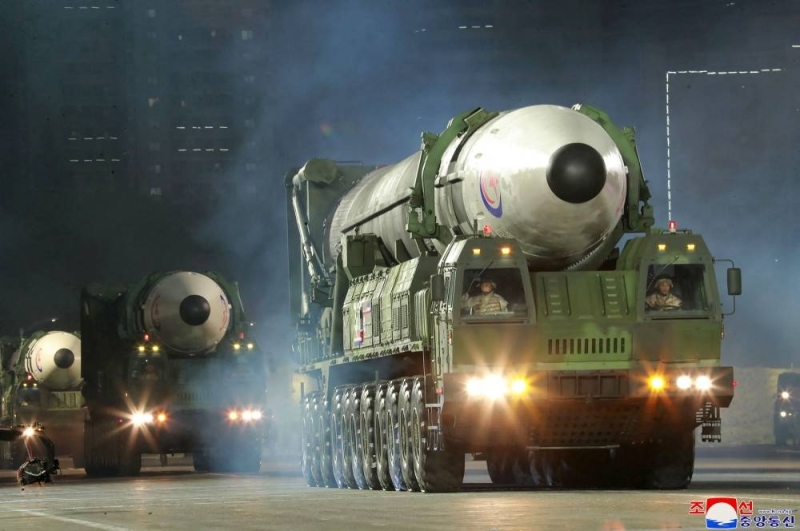 In this file picture taken on April 25, 2022 and released by North Korea’s official Korean Central News Agency (KCNA) on April 26, Hwasong-17 intercontinental ballistic missiles (ICBM) are displayed during a military parade to celebrate the 90th anniversary of the founding of the Korean People’s Revolutionary Army at Kim Il Sung Square in Pyongyang. – AFP photo

SEOUL (Nov 17): North Korea has fired an “unidentified ballistic missile”, Seoul’s military said Thursday, the latest in a record-breaking blitz of launches as Pyongyang warned of a “fiercer” military response to the US and its regional allies.

“North Korea fires an unidentified ballistic missile into East Sea,” South Korea’s Joint Chiefs of Staff said, referring to the body of water also known as the Sea of Japan.

Earlier this week, US President Joe Biden discussed North Korea’s spate of recent missile tests with his Chinese counterpart Xi Jinping in Bali, Indonesia on the sidelines of the G20 summit.

The US leader pushed China to use its influence to rein in North Korea after the wave of missile launches raised fears the reclusive regime would soon carry out its seventh nuclear test.

On Thursday, North Korea’s minister of foreign affairs, Choe Son Hui, slammed these discussions, saying they were “bringing the situation on the Korean peninsula to an unpredictable phase.”

“The US ‘bolstered offer of extended deterrence’ and the daily-increasing military activities of the allied forces around the Korean peninsula are foolish acts,” Choe said in a statement carried by state news agency KCNA.

The more Washington works to strengthen its security alliance with Tokyo and Seoul, “the fiercer the DPRK’s military counteraction will be”, Choe said, referring to the North by its official name.

Experts said the Thursday missile launch was “timed” to coincide with the statement from Pyongyang’s foreign minister.

The North “fired the missile after releasing the statement hours earlier in an attempt to justify the launch to send its message to the US and Japan,” Cheong Seong-chang, a researcher at the Sejong Institute told AFP.

Earlier this month, North Korea conducted a flurry of launches, including an intercontinental ballistic missile, which Seoul said appeared to have failed.

Pyongyang also fired a short-range ballistic missile that crossed the de facto maritime border between the two countries and landed near the South’s territorial waters for the first time since the end of the Korean War in 1953.

President Yoon said at the time that it was “effectively a territorial invasion”.

Both launches were part of a November 2 barrage in which Pyongyang fired 23 missiles — more than it launched during the whole of 2017, the year of “fire and fury” when Kim traded barbs with then US president Donald Trump on Twitter and in state media.

China, Pyongyang’s main diplomatic and economic ally, joined Russia in May in vetoing a US-led bid at the UN Security Council to tighten sanctions on North Korea.

Washington has responded to North Korea’s sanction-busting missile tests by extending exercises with South Korea and deploying a strategic bomber.

Pyongyang has also been under a self-imposed coronavirus blockage since early 2020, which experts say would limit the impact of any additional external sanctions. — AFP

Previous ArticleChina attacking Taiwan a ‘mistake’ like Russia in Ukraine, says top US general
Next Article Ismail Sabri declares commitments for Malaysia if able to continue to helm administration