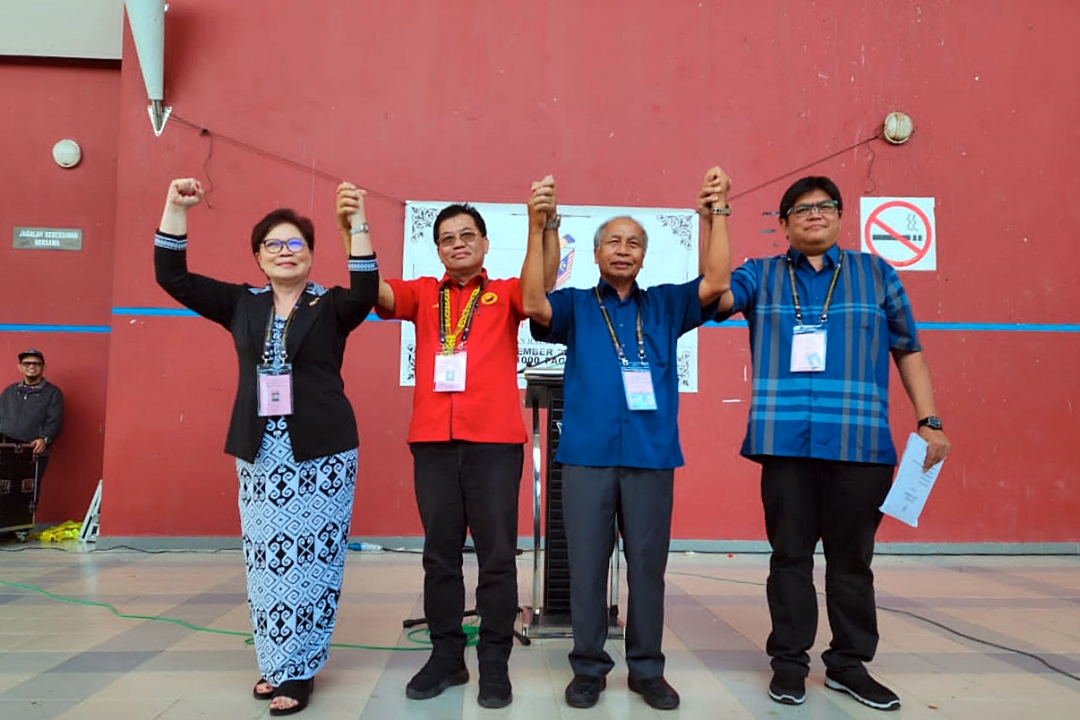 (From left) Doris, Wilson, Masir and Tay are pictured during nomination day for GE15 at the Sri Aman Sports Complex indoor stadium on Nov 5.

SARAWAK’s Dayak women have defied the odds to become leaders in various fields but there’s still one hallowed hall where they have yet to have a seat – parliament.

They have indeed had the opportunity to contest in the national polls as candidates from both sides of the political divide but the Dewan Rakyat has continued to be out of reach.

The corporate lawyer lost by just 486 votes to then Pakatan Harapan candidate Baru Bian. Rita was appointed a senator in 2020.

Perhaps it is the community’s perception that politics is the domain of men and a woman might not be able to handle some of the demands expected of a man.

Whatever the reasons, this 15th general election could see history in the making with four Dayak women candidates in the fray.

Among them, Gabungan Parti Sarawak’s (GPS) sole Dayak woman candidate Doris Sophia Brodie, who is PRS Women chief, might have the best chance of winning.

She is embroiled in a four-cornered fight against incumbent and former party colleague Datuk Masir Kujat, who is defending the seat as an independent; Parti Sarawak Bersatu’s (PSB) Wilson Entabang; and Pakatan Harapan’s (PH) Naga Libau @ Tay Wei Wei.

Right out of the gate, Doris would seem to be in a better position to win compared to Rita, whose defeat was attributed to disagreements in PRS as the then Selangau incumbent Datuk Joseph Entulu Belaun was dismissed from the party.

On top of that, Barisan Nasional Sarawak is no more and Doris is presented with the opportunity to offer voters a fresh start through GPS, which won with a thumping victory in its first state election last December.

Several individuals, when asked for their opinion on Doris, felt she is the right person to represent the area because they know her credibility as a politician, and not only because they want to see the election of the first Dayak woman MP or because she represents GPS.

“Doris has the experience in politics and she is the right person who can bring development to the Sri Aman parliamentary area. She has the vision and is known to be a dedicated politician, and I’ve known her and her works for a long time,” said Sri Aman voter Balean Suji Inggol.

Another Sri Aman native, Surai Anthony Abell, an entrepreneur and former youth parliamentarian, said Doris is a person who is easy to be around with and listens to the people’s problems.

“This has been proven when she was a political secretary to the Premier. She always received and attended invitations from the people in the Sri Aman area.

“Doris also has undeniable work experience because she held the position of Deputy Speaker of the Dewan Negara while being a Senator. Because of this, we know that Doris is a person of calibre and experience in government behind-the-scenes management.

“What is also important for me, Doris is the one who is very concerned about the youths in Sri Aman too. When I served as a Malaysian Youth Member of Parliament, Doris was one of the people who contacted us to ask about youth problems in the area.

Although she has the might of the GPS election machinery on her side, Doris is not taking the GE15 lightly and she has been hitting the campaign trail hard.

In her campaign, she has said that she is determined to bring the voices of women into parliament.

“Being a woman candidate is not about whether you are lesser or you are better than men in terms of performance. The only thing is the lack of opportunity,” she said recently.

Doris is focusing on education and agriculture on the campaign trail.

“To me, education improvement in Sri Aman is done based on two aspects – infrastructure and holistically – meaning that people must be educated not only in terms of academics but also in creating awareness among the people of its importance.

“(And) since Sri Aman is identified as an agriculture hub for Sarawak, I think we need an agricultural university to be set up in Sarawak, based in Sri Aman. If not a university, then perhaps a college,” she said when contacted last Thursday.

Perhaps it is timely for the Dayak community to have a woman MP, not only to show the world that the community is in tune with the scenarios of the modern times, but also that their women are just as learned and capable of caring for society at large as they do for their families.

But whether that happens is up to the 50,164 voters of Sri Aman, and Doris has to convince them first that she is deserving of not only being their elected representative but also the first Dayak woman member of parliament.