Monday, February 6
You are at:Home»News»Sarawak»AirAsia unveils Singapore-Sibu route at Sarawak Fair
For the freshest news, join The Borneo Post's Telegram Channel and The Borneo Post on Newswav. 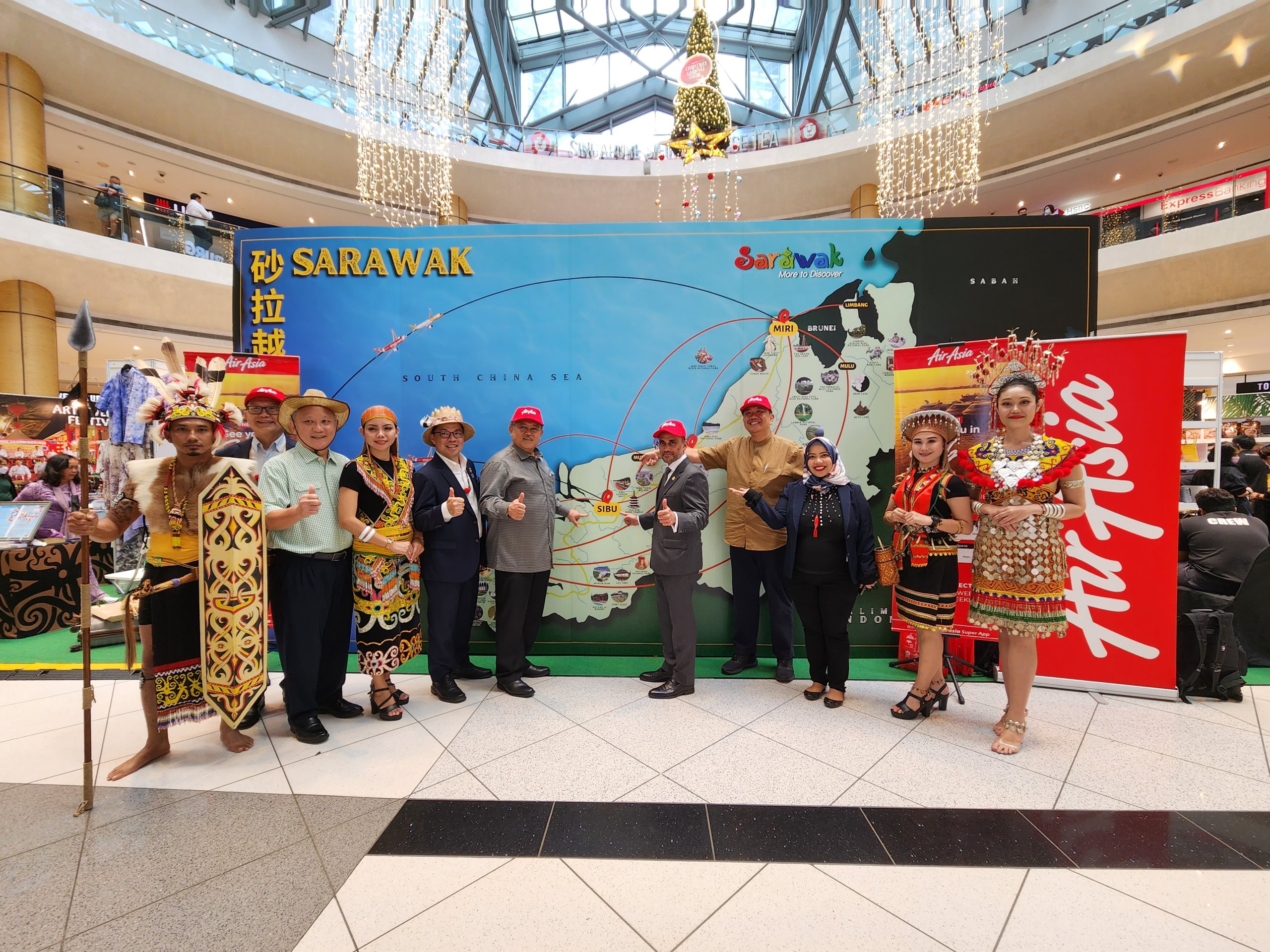 (From fourth left) Chew, Mohamad Morshidi, Azfar, Hamdan and Putrie Rozana in a photo call during the opening ceremony of Sarawak Fair in Singapore yesterday.

KUCHING (Nov 22): The inaugural Sarawak Fair, organised by Sarawak Trade and Tourism Office Singapore (Statos), has opened to much fanfare with AirAsia unveiling its latest route from the city state to Sibu in Sarawak starting Dec 16.

In a statement, AirAsia said the Singapore-Sibu route will start with four flights a week and this is the third route serviced by the airline connecting Singapore and Sarawak.

The Singapore-Kuching and Singapore-Miri routes have been announced in April.

“The Singapore to Sibu direct flight will commence Dec 16, just in time for the year-end holiday and the upcoming Chinese New Year celebrations,” said the airline in a statement.

It said promotional fares from as low as S$74 all-in for a one-way Singapore-Sibu trip are available for booking on the Airasia Super App and website from now until Nov 27.

Meanwhile, the return flight from Sibu to Singapore promo fares start from only RM99 all-in. Travel period for the promotion is from Dec 16 until March 28, 2023.

AirAsia Malaysia chief executive officer (CEO) Riad Asmat said the airline has received an overwhelming response from the business community, residents with families living on the other side, tourists and travellers after the announcement of the  route last week.

“This is a much-awaited route for the business people and we are very glad to be working closely with Statos as well as the Ministry of Transport Sarawak, Ministry of Tourism, Creative Industry and Performing Arts Sarawak, Sarawak Tourism Board and all other stakeholders and tourism partners in Sarawak and Singapore to make this route a success,” said Riad.

Moreover, he said the Singapore-Kuching flights will be increased to 11 times a week and Singapore-Miri flights to five times a week starting December.

“Together with the four-times weekly Singapore-Sibu flights, we are the airline with the largest connectivity between Singapore and Sarawak, and we are very happy to be able to further facilitate trade and commerce; travel and tourism; and reconnecting families between the two regions,” he added.

Meanwhile, Statos CEO Chew Chang Guan said he is excited for AirAsia to come aboard to work with the office to be the main gateway for Sarawak trade, investment and tourism with Singapore and beyond.

“The introduction of the Singapore-Sibu route by AirAsia cannot be at a better time as we are working hard with all stakeholders to strategize in making Sarawak the preferred destination for tourism and business,” said Chew.

The seven-day Sarawak Fair by Statos is ongoing until Nov 27 and it features 31 exhibitors from Sarawak’s tourism and business sectors.

Visitors purchasing a tour package to Sarawak during the event will be able to ‘Spin the Wheel’ for sponsored prizes worth around S$40,000.

The prizes include 16 return air tickets with AirAsia to Sibu, Kuching and Miri, resort and hotel vouchers; discount vouchers for holiday packages and sample products; including Sarawak’s world-famous bird’s nest and black pepper.

Both flights are on every Monday, Wednesday, Friday and Sunday.