Saturday, December 3
You are at:Home»World»Iran’s players opt not to sing anthem at World Cup 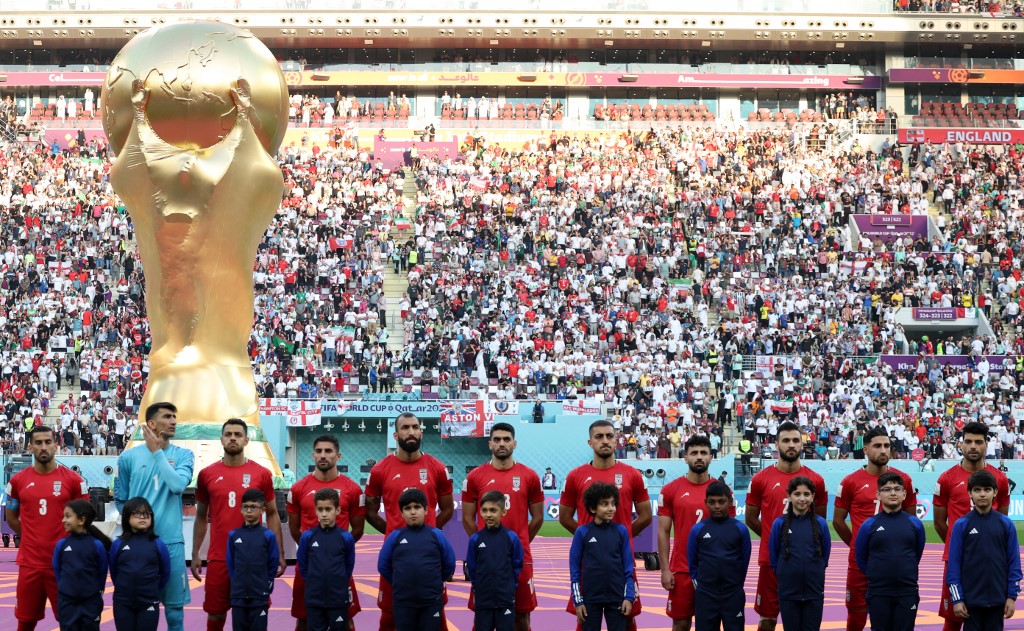 Iran players listen to the national anthem ahead of the Qatar 2022 World Cup Group B football match between England and Iran at the Khalifa International Stadium in Doha on November 21, 2022. — AFP photo

DOHA (Nov 21): Iran’s World Cup players chose not to sing their national anthem in apparent support for anti-government protesters in their homeland on Monday, as European teams ditched rainbow-themed armbands.

Led by captain Alireza Jahanbakhsh, the Iranian players stood impassively as their anthem rang out before their opening match of the tournament against England in the Qatari capital Doha.

Ahead of the game, Jahanbakhsh said the team would decide together whether or not to refuse to sing the anthem in solidarity with the nationwide protests triggered by the death of 22-year-old Mahsa Amini in morality police custody on September 16.

Amini, an Iranian of Kurdish origin, died three days after her arrest in Tehran over an alleged breach of the Islamic republic’s dress code for women.

England’s captain Harry Kane had been expected to wear a rainbow-themed armband for the match, but hours before kick-off, the English, German and five other European federations said they were abandoning the plan to wear the “One Love” insignia.

They have been widely viewed as a symbolic protest against laws in Qatar, where homosexuality is illegal.

The seven teams said they felt they had no choice but to ditch the plan because of the risk their captains would be punished by football’s world governing body.

“FIFA has been very clear that it will impose sporting sanctions if our captains wear the armbands on the field of play,” the federations of England, Wales, Belgium, Denmark, Germany, the Netherlands and Switzerland said in a statement.

They said they had been prepared to pay fines that would normally apply to breaches of kit regulations because they had “a strong commitment to wearing the armband”.

“However, we cannot put our players in the situation where they might be booked or even forced to leave the field of play,” they said.

Cristiano Ronaldo insisted that his recent row with Manchester United would not overshadow Portugal’s preparations for their opening match with Ghana on Thursday.

Superstar Ronaldo will spearhead Portugal’s attack at what will likely be his last World Cup, fresh from blasting United’s owners and coach Erik ten Hag in a TV interview.

The 37-year-old has been reduced to a peripheral role at United this season and was suspended for a match after refusing to come on as a substitute against Tottenham last month.

“I have no doubt that this recent episode, that interview, and other episodes with other players that happen sometimes, can sometimes shake the player but won’t shake the team,” Ronaldo told reporters at the Portugal camp.

The other game in England’s Group B pits the USA against Gareth Bale’s Wales, playing in their first World Cup since 1958.

Captain Bale said he hoped to inspire a new generation of Welsh footballers.

“Everyone’s dreamt of it for such a long time,” said the former Real Madrid forward. “We’ve had so many close calls. For us to be the team to get over the line was incredible.”

The Netherlands take on Senegal in Group A, with the African champions missing their injured talisman, Sadio Mane, who has been ruled out of the tournament.

The Dutch failed to qualify for the World Cup in Russia in 2018 but the three-time runners-up are back in business under veteran manager Louis van Gaal, who led the team to the semi-finals in 2014.

Meanwhile the Qatari media slammed their team after they were beaten 2-0 by Ecuador on Sunday, becoming the first host nation to lose their opening match of a World Cup.