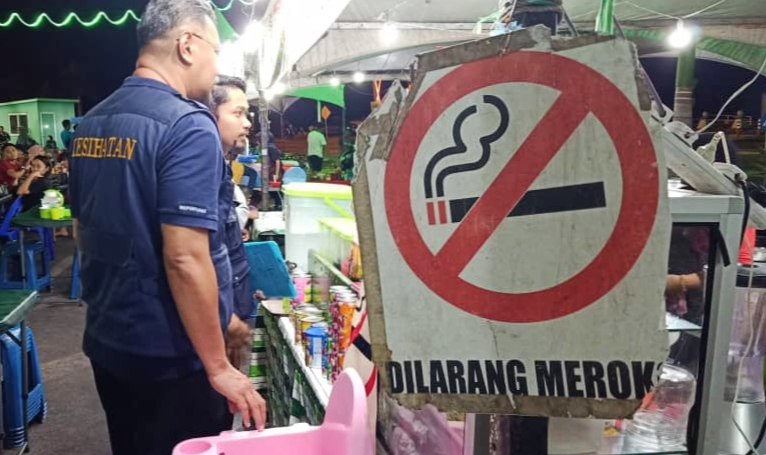 A health officer inspecting one of the eateries on the first day of operation to enforce smoking ban. – File photo

PUTRAJAYA (Nov 23): The Court of Appeal here today upheld the Health Ministry’s decision to ban smoking in all eateries, ruling that smoking in public places is not a fundamental right that should be protected under the Federal Constitution.

Justice Gunalan, who delivered the court’s decision in an online proceeding, said the Health Minister is empowered under the law to impose restrictions on smoking such as where or when smoking is prohibited.

“It is our view that banning smoking at eateries, restaurants etc can be considered as not being in violation of Article 5 (right to life or personal liberty) and Article 8 (all persons are equal before the law and entitle to equal protection of the law) of the Federal Constitution.

Justice Gunalan said that the appellate court panel agreed with the High Court’s interpretation that the act of smoking in public places is not a fundamental right that ought to be protected under the Federal Constitution.

“As the ban applies to all persons, all patrons, the issue of discrimination, if in fact, it arises at all, does not infringe Article 8 of the Federal Constitution.

“There was no error of law or fact or failure of judicial appreciation by the High Court judge in arriving at her decision to dismiss the appellants’ judicial review. Hence there are no grounds for us to disturb or interfere with the decision of the learned judge,” he said.

The court also did not make any order as to costs.

On Oct 29, 2019, the then High Court Judge Datuk Seri Mariana Yahya (now Court of Appeal judge) dismissed the individuals’ judicial review application to get a certiorari order to quash the decision of the Health Ministry to ban smoking at eateries.

In their judicial review filed on Dec 31, 2018, naming the Health Ministry as respondent, the seven men, who had set up a society called Persatuan Pertahankan Perokok (PHP),  also sought a declaration that the ministry’s decision on banning smoking at eateries was unconstitutional.

They claimed that smokers had equal rights with non-smokers to visit and spend their time in food premises for as long as they wished and that the government did not provide adequate facilities such as smoking areas or include provisions under the smoking ban for entrepreneurs to prepare their own non-smoking areas.

The Health Ministry imposed the ban on smoking at all restaurants and food premises on Jan 1, 2019. – Bernama