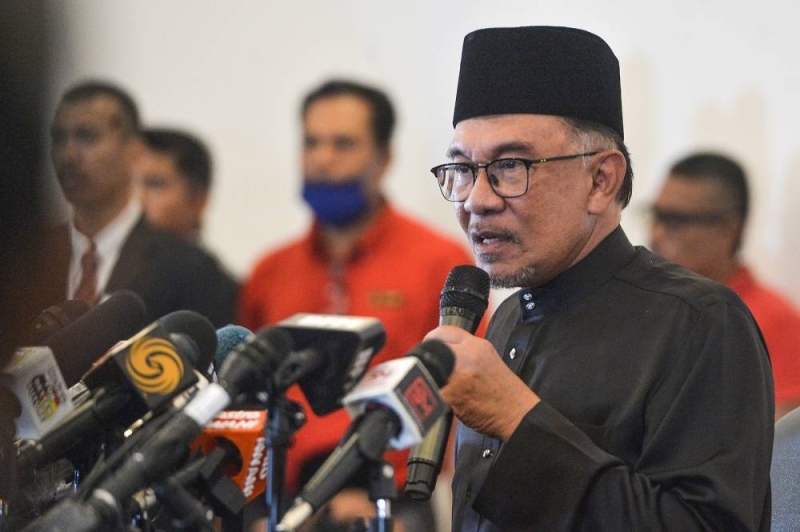 During his first press conference as the prime minister, Datuk Seri Anwar Ibrahim said he had the ‘full commitment’ of all 30 MPs from BN as well as the GPS endorsement that finally came earlier today. – Malay Mail photo

During his first press conference as the prime minister here, he said he had the “full commitment” of all 30 MPs from BN as well as the GPS endorsement that finally came earlier today.

Despite this, Anwar said he was still prepared for others such as Perikatan Nasional to join the “unity government” the Yang di-Pertuan Agong proposed after no coalition won the 15th general election outright.

“I take a very open view. This is a ‘National Unity’ government; all are welcome, on the condition you accept the fundamental rules of good governance, no corruption, and a Malaysia for all Malaysians,” he said.

He initially did not name PN, but it was the only major coalition that was not part of the Anwar administration.

While he would later identify it by name, he also conceded that the response was not encouraging as PN chairman Tan Sri Muhyiddin Yassin was still disputing the legitimacy of his appointment.

With just the lawmakers from PH, BN, and GPS, Anwar would have a “convincing majority” of 133 MPs even before including smaller parties such as Warisan, Muda, and PBM; a simple majority is 112.

As for PN, PAS and Bersatu jointly have 73.

Technically, the Anwar administration will be a coalition government as a unity government would entail having no party in opposition to the government. – Malay Mail

Previous ArticleAnwar: Islam, Bumiputera rights will be upheld but no M’sian will be marginalised under his watch
Next Article PM Anwar announces public holiday on Monday