Wednesday, December 7
You are at:Home»News»Nation»PM Anwar to convene Parliament on Dec 19, put himself before vote of confidence 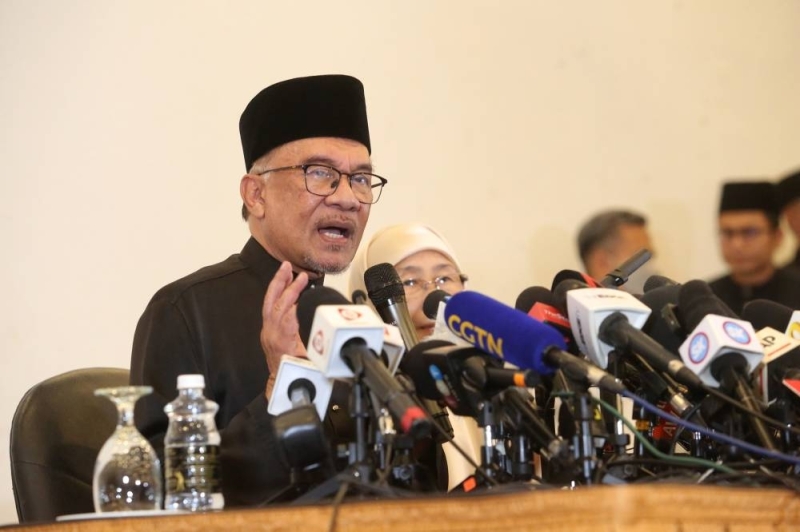 KUALA LUMPUR (Nov 24): Malaysia’s 10th Prime Minister Datuk Seri Anwar Ibrahim today announced that the Dewan Rakyat will sit on December 19, with a vote of confidence being the first order of business.

Anwar was speaking at his first press conference as prime minister, after taking a phone call from Turkish President Recep Tayyip Erdoğan.

“I want to explain here that we have already fixed the Parliament session on December 19, and the first motion, apart from me taking my oath, is the motion from the government for a vote of confidence.

“So, for me, there is no reason to worry about the legitimacy that is there,” he added.

Earlier today, Perikatan Nasional (PN) chairman Tan Sri Muhyiddin Yassin continued to dispute Anwar’s appointment by insisting he had gathered the support of 115 MPs ahead of the first deadline the Yang diPertuan Agong had set for Thursday.

However, the 115 figure included the sworn declarations of 10 Barisan Nasional MPs that were rescinded before the deadline, which the Agong had also extended after it became clear that negotiations among the coalitions were ongoing.

During the press conference after his appointment earlier, Anwar said that his immediate priority would be to restore Malaysia’s economy.

“I am grateful that today and before this, the situation and confidence of investors had changed. The ringgit strengthened and the stock market is reinvigorated.

“Let us now focus on the economy and do whatever it takes to revive so that the welfare of the rakyat, particularly the poor and the marginalised will be protected,” he added.

During a question-and-answer session with reporters, Anwar also stressed on his earlier promise to forgo his prime minister’s salary.

“I had announced that the first step to gain back the trust of the rakyat, so that they don’t view ministers and leaders, irrespective of party, irrespective of faith, all of them as being those who only think of salaries, interests, contracts, shares.

“Therefore, I chose to reject the salary of a prime minister,” he added.

It also ends the current stage of the political intrigue and uncertainty that befell Malaysia after the 15th general election that Malaysians had been told was urgently needed to give the country stability.

Anwar must now work to form a Cabinet that will need to balance the composition of the parties supporting his PH coalition in forming the government, as well as the communal sensitivities of the country that had motivated the Agong to advocate for a unity government. – Malay Mail

Previous ArticleYouth voters a force to be reckoned with
Next Article PM Anwar: DPM post will come from stronger component coalitions