Monday, January 30
You are at:Home»News»Sabah»Highest budget in Sabah’s history
For the freshest news, join The Borneo Post's Telegram Channel and The Borneo Post on Newswav. 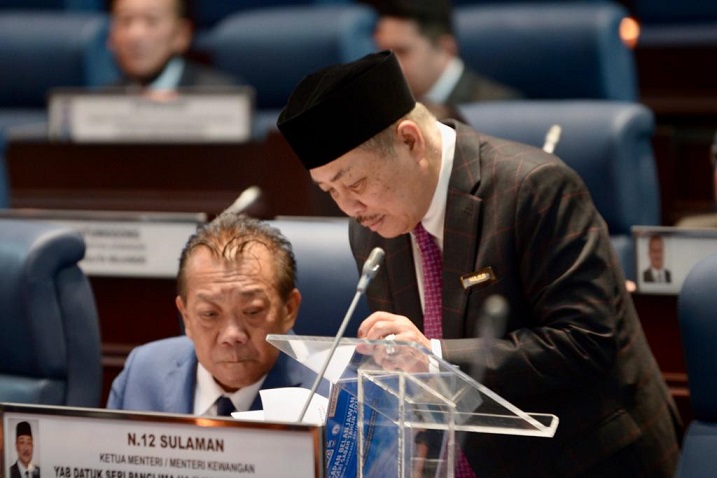 KOTA KINABALU (Nov 25): Sabah’s 2023 surplus budget of RM130.47 million is the highest budget in the history of Sabah since independence.

Chief Minister Datuk Seri Panglima Hajiji Noor said that the budget themed “Strengthening the Economy for People’s Prosperity” is in line with the State’s economic growth based on Sabah Maju Jaya(SMJ) Development Plan.

“The primary focus of the 2023 Budget is to drive and strengthen the State’s economy to ensure continuous and inclusive progress and prosperity of the State and her people,” he said when unveiling the 2023 State Budget at the Sabah State Legislative Assembly on Friday.

“To achieve this, the State Government proposes an estimated budget for the year 2023 amounting to RM5.138 billion with an estimated revenue collection of RM5.268 billion.

“This 2023 Budget reflects a surplus budget of RM130.47 million and represents the highest budget in the history of Sabah since independence. May the 2023 Budget provide benefit and contentment as well as blessing to my leadership to continuously progress the State, so that all tiers of society can enjoy the facilities provided by the government,” Hajiji said.

Budget is also allotted for Charged Expenditure with RM227.24 million and Expenditure Not Included in the Ministries with RM38.79 million.

However, he said that for the first time, the State government successfully generated over RM5 billion revenue and at the same time created a new record with the highest revenue in Sabah’s history amounting RM5.449 billion.

“As a crude oil and crude palm oil (CPO) producing state, the exceptional increase in commodity prices has brought about a positive impact to the State’s revenue this year. Therefore, the Revised Revenue Estimates for year 2022 is projected at a higher level which is RM5.988 billion compared to the original estimates of RM4.707 billion,” he said.

He added that if commodity prices continued to be high, Sabah could reach a new revenue level of RM6 billion.

On the 2023 State revenue, Hajiji said that acknowledging the fact that most of the State’s revenues are commodity based, which are subject to price fluctuations resulting from market, economic and global geopolitical conditions, hence, conservative approach is maintained in preparing the 2023 Revenue Estimates to ensure the State’s financial position continues to be strengthened.

He said that the Estimated Revenue for the year 2023 is projected at RM5.268 billion as follows:
First: Tax revenue amounting to RM2.405 billion which includes State Sales Tax of RM2.270 billion, Land Rent of RM90 million and Ports and Harbour Dues of RM44.5 million.

Second: Non-Tax Revenue amounting to RM2.311 billion which includes Petroleum Royalties of RM1.35 billion; Sales of Water at RM300 million; Land Premium of RM144 million; Dividends of RM137 million; Forest Produce Royalty and Export on Timber Products of RM133.5 million; and Interest on Cash Balance and Short Term Deposits of RM115 million; and Third: Non-Revenue Receipts amounting to RM553.17 million, of which one of the main contributors is Federal Government grants with an estimate of RM528.87 million which comprises five receipts namely Special Grants; Capitation Grants; Grants in Aid of Operating Expenses for the Departments Under the Concurrent List; Grants to Replace Import/Excise Duties on Petroleum; and Contribution towards implementation cost of Federal Development Projects.

Hajiji then stated that despite facing economic instability and various challenges, the State government continuously intensifies and diversifies its efforts to increase and generate more sustainable sources of revenue.

He stated that among the efforts made was to improve revenue management comprehensively by strengthening every aspect of enforcement to recover revenue arrears and deal with any revenue leakages.

“For example, through the establishment of a Special Task Force on State Sales Tax on Petroleum Products and with the cooperation from the Ministry of Finance, Chief Minister’s Department, State Attorney General’s Department and SMJ Sdn Bhd as an advisor has successfully collected overdue taxes amounting to RM132 million. With this, all 15 oil and gas companies in Sabah have made their payment for State Sales Tax on Petroleum Product.

“Here forth, I would like to remind all state sales taxpayers to be honest, responsive and ensure tax declarations are carried out responsibly, accurately, and regularly. The State Government will not hesitate to act in accordance with the provisions of the law for those who fail to do so,” he said.

He said that effort is also made to expand the source of the state’s revenue, for example, through the implementation of the new State Sales Tax on scrap metal that started last February with an estimate of RM18 million per year and the expansion of the scope of the Petroleum State Sales Tax to cover ammonia and urea products that started in August is also expected to contribute RM110 million per year to the state revenue.

The next effort is to defend and uphold the rights of Sabah.

The last effort is by intensifying further the enforcement of dividend collection of government-linked companies and statutory bodies through monitoring the management and financial performance as well as new business and investment strategies so that government agencies continue to be viable.

“Revenue is the core of the State’s development and the well-being of the people; therefore, I call on all parties to continue to work together to carry out the responsibility and mobilize our energy to drive the State’s revenue towards a higher and more sustainable collection that can guarantee economic stability and development of the state as well as the well-being of the people,” he said.

On the 2023 supply expenditure estimates, Hajiji said that for the purpose of financing government operations and management, a total of RM5.138 billion is proposed for year 2023 which involves an increase of RM541.23 million or 11.77 per cent compared to the original 2022 estimates of RM4.597 billion.

He said that the total estimates are distributed accordingly for the payment of Emoluments, Recurrent Expenditure and Special Expenditure.

“From the total of 2023 Supply Budget, an amount of RM792.28 million or 15.4 per cent is proposed for Emoluments. Meanwhile, a total of RM1.977 billion or 38.5 per cent is proposed for Recurrent Expenditure to cater the needs of water supply and sewerage services; Social Services Programme, Grant for General Assistance, Orphans and the Poor; Special Education Assistance; Development of Mosques, Surau and Religious Schools Programmes; as well as flood management, irrigation and drainage works programme,” he said.

He also added that a total of RM2.369 billion or equivalent to 46.1 per cent is proposed for Special Expenditures.

“The Special Expenditure allocation for year 2023 portrays the government’s concern and determination in providing comfort for the people which involves increased allocations for infrastructure maintenance; Special assistance to fishermen, farmers and breeders; grant for schools and non-Islamic religious bodies; and also grant for statutory bodies, government agencies and Local authorities,” he said.

“Although the National Budget has not been debated and approved, the State Government is required to project an estimation of RM604.67 million to ensure continuation of current projects implementation funded by the Federal Government for the year 2023,” he explained.

He also said that in line with the State Budget theme, the Economy Sector remains as the biggest recipient of development allocation which amounted to RM515.81 million or equivalent to 65.3 percent.