Monday, January 30
You are at:Home»Features»Immersive theatre: To see, or not to see — you choose
For the freshest news, join The Borneo Post's Telegram Channel and The Borneo Post on Newswav. 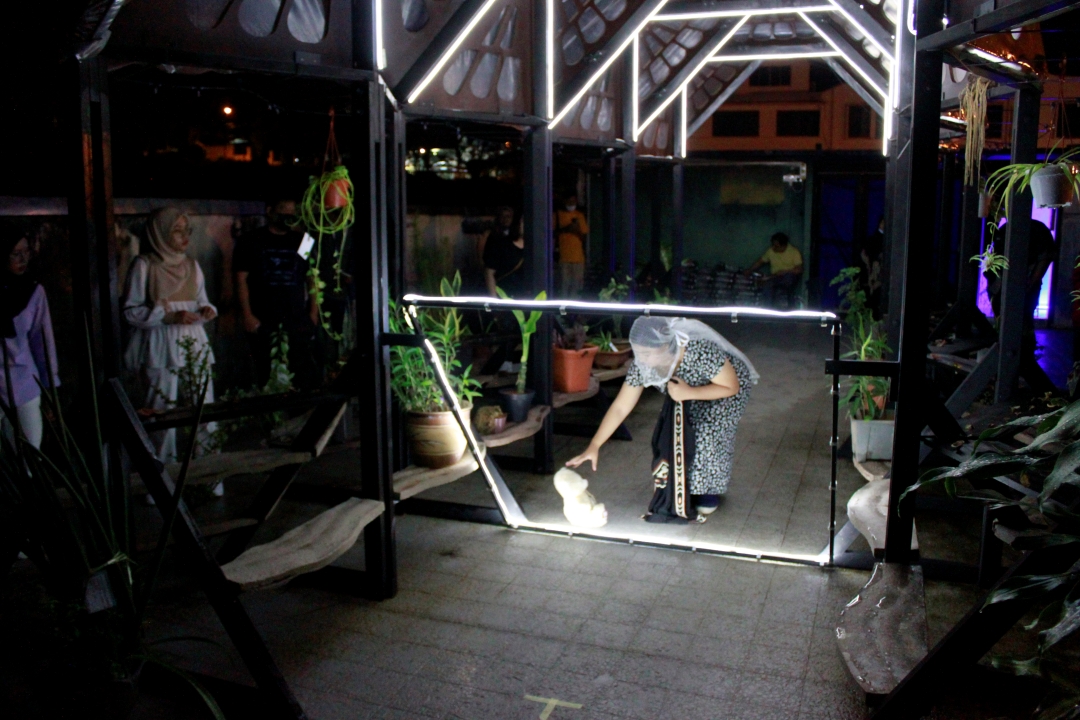 >’Nadia’ placing her teddy bear on the floor before telling her story to the audience.

UPON learning about a new play to be staged in connection with What About Kuching Festival 2022, I did not think much about it, believing that it would probably be similar to any other shows that I had watched before.

I was later emailed a copy of the playbill for ‘The Hyacinths Are Blooming’, a production by theatrethreesixty – a Malaysian theatre collective established in March 2014.

It was then when I noticed the phrase ‘immersive theatre’.

“Well, aren’t all stage plays more immersive than the movies or TV shows? Why say it out loud for this one?” I wondered.

Still, I looked forward to watching it as the subject was one worthy of consideration – mental health.

Penned by local playwright Alex Chua with the direction and production design by Christopher Ling, ‘The Hyacinths Are Blooming’ was supported by Befrienders Kuching and the Mental Health Association of Sarawak.

The synopsis started by saying Nadia, the only protagonist of the play, was unwell.

She did not know it yet, but she was going to be put in a ‘box’.

As her reality collapsed, she and the people around her reflected on her spiral descent into mental illness, ‘the state of the garden’, and the meaning of ‘living inside a box’.

Talking about ‘reflection’, the venue of the play was Think + Tink at Jalan Tabuan, where the retro-popular Ting & Ting Supermarket used to be.

As I scanned the QR code to register inside, I looked around – the sight invoked mixed feelings.

On one hand, I was impressed to see how bohemian the setting had become, with the front section now housing a café, and the back section providing a space for an art gallery, a workshop and an area for meetings or small sessions.

However, it was also a bit sad to see a spot inside the premises where, back in my childhood days, rows of shelves stocked with various imported goodies used to stand.

Ting & Ting Supermarket, known for being the place to go in Kuching for various imported grocery and specialty products, closed in 2019 after over 60 years in operation.

Well, at least the rebranding paid homage to the old name, I said to myself.

“Hello, there. Thank you for coming,” Ling’s greet snapped me back to real time.

The 48-year-old co-founder and artistic director of theatrethreesixty then showed me around, detailing how and where ‘Hyacinths’ would take place.

“So, an immersive theatre does not have a fixed stage. This whole lot is the stage.

“You are free to follow ‘Nadia’ around – listen to her, imagine what she imagines, feel what she feels.

“Or… you can choose not to either. There’s a room where you can watch a video playing conversations and dialogues on mental illness.

“The narratives are also being played over the speakers; you’ll get to hear Nadia’s mother talking, and also the dialogue with the psychiatrist. Go — experience it,” he said.

Flow of the show

The first installation took place on the rooftop of Think + Tink, which was indeed cooler and more comfortable than the crowded area downstairs.

Everyone was standing around the set-up, which was basically a pergola with a simple makeshift structure at one end, which I assumed where the actress would be at later on, judging from it being the only section there bathed in light.

I was correct – from the door, a silhouette emerged and walked slowly towards the structure.

It was ‘Nadia’, clutching a robe and a teddy bear, and she had a mesh veil over her head.

Upon reaching the end, she placed the teddy bear on the floor, put on the robe, turned around and lifted her veil.

She then began her monologue.

I did not catch most of the words, but her gestures and expressions helped translate them. My guess was the first installation interpreted the introductory part of the synopsis — how Nadia, who was battling schizophrenia, was about to be sent to a facility but she had yet to know it, and this particular segment of the play showed her reaction to the collapsing reality and also her perception of the people around her.

Overall, it was 15-minute scene and already, I felt ‘Nadia’ was a heavy character to portray.

In this respect, the producer was not wrong in casting established theatre talent Shasha Fairus for that role. Not only did the 28-year-old actress delivered superbly in the first installation, but she remained in character throughout the following three acts. 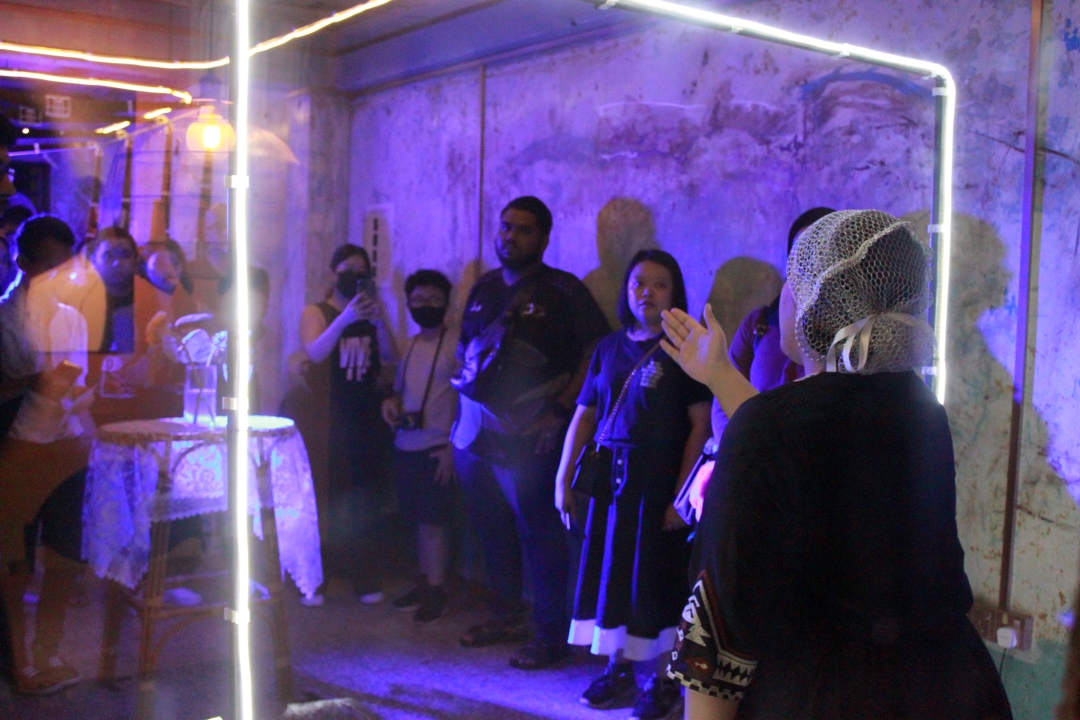 Members of the audience giving full attention to the character played by Shasha.

For the next installation, ‘Nadia’ proceeded to what I later assumed was the ‘psychiatrist room’, based on the set-up and also the content of her monologue. Whereas the ‘Rooftop Nadia’, to me at least, was childlike and confused, the ‘Psychiatrist Room Nadia’ had more clarity in describing her plight – it was more like a girl’s heart-to-heart conversation with a best friend.

This time, however, I could not see much of her gestures and expressions as the audience, which by then had grown larger, was blocking my line of sight.

Nonetheless, it was the third installation that made ‘Hyacinths’ a play restricted only for mature audiences aged 16 and above. Here, ‘Nadia’ was more rebellious, and one part that I found both disturbing and amusing was her ‘negotiation with Mr Psychiatrist’, where she promised him sexual favours if he could just let her be. It was disturbing because of the nature of and the words uttered in the situation; amusing because of her nonchalant expression (at least, as much that I could see amidst the sea of people before me) which, I thought, was contradictory to such a scene.

I skipped the fourth installation, though, because there was something else that caught my attention – the audio-visual room. This was where the afore-mentioned video of conversations and dialogues about mental illness was being played.

Now being in that room and listening to the audio – augmented by slides of impactful images on the TV screen – really downplayed the R-rated words that ‘Psychiatrist Room Nadia’ was throwing out earlier – all the derogatory remarks and curses that one could think of, in both English and Bahasa Malaysia, blared out from the speakers without any filter at all.

According to Ling, that very section meant to represent what was termed as ‘auditory hallucinations’ – basically noises and voices that a person with schizophrenia would hear in his or her head, and would often get louder, more vicious and more persuasive over time, leading to them being perceived as ‘real’. 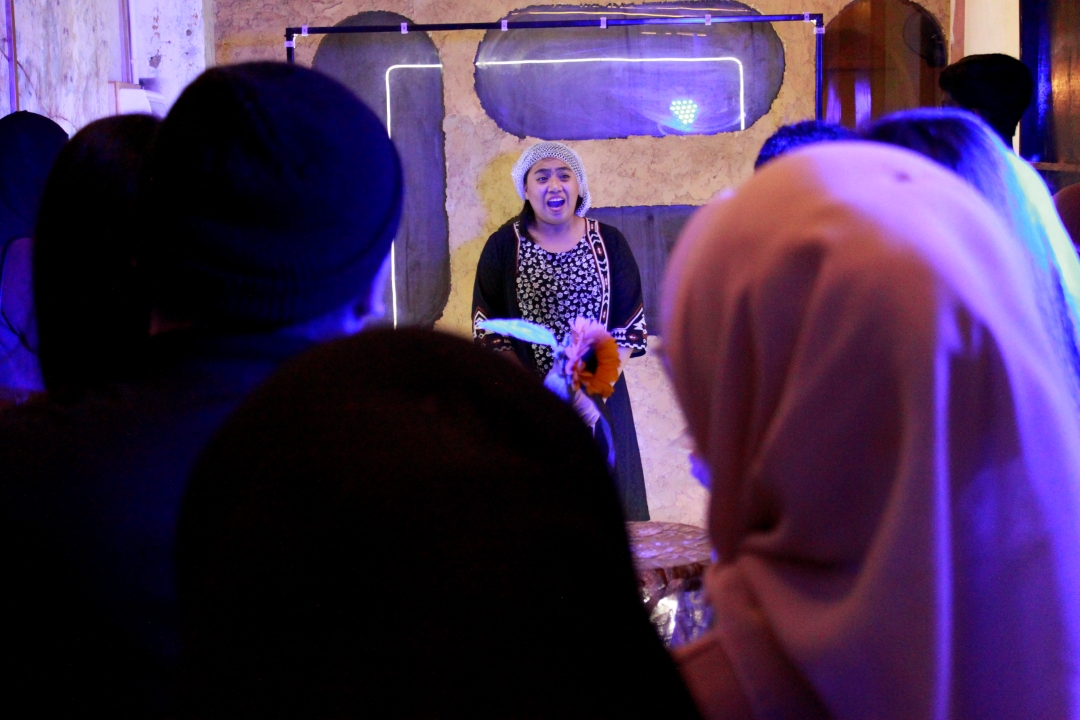 I got to have a chat with Ling and Shasha after the play, where they both shared the process that led to the staging of ‘Hyacinths’ in Kuching.

“I got the script in August,” said Shasha.

“So it was quite a tight deadline for me to understand the character and do my homework, but I was committed to doing it right. I discussed with him (Ling) a lot, so that had helped the process.”

On the character, Shasha said ‘Nadia’ struck a chord with her.

“I have a number of friends who suffer from schizophrenia. My experiences with these individuals, I ‘borrowed’ them for ‘Nadia’. There weren’t many rehearsals for ‘Hyacinths’; he (Ling) told me to trust my instinct, so I did.” 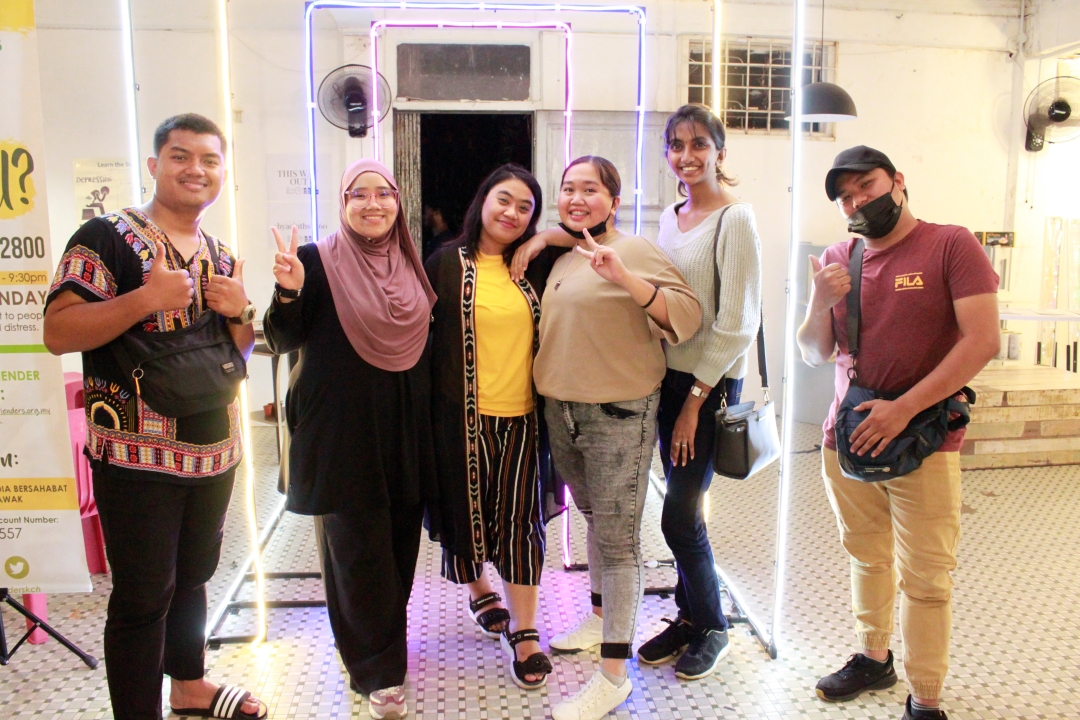 Shasha (third left) in a group photo with some members of the audience.

Asked about immersive theatre, Shasha said ‘Hyacinths’ was not her first in that she had her maiden experience in the production of ‘Haunt-U Malaysia’ in Kuala Lumpur back in 2019, which ran for one year.

“One of the similarities is the ‘loop’ – I’m doing the scenes again and again every day throughout the production run. Other things like props handling and engagement are also similar to any on-stage performance.

“The difference in immersive play (is) instead of me being the centre of the show, I’m a part of the installation. The immersive experience is happening all around the space.

“The beauty of it is you can choose to watch my performance, or not, because there are other elements of the show related to its theme or subject that the audience can engage with. Like I have said, I’m just one of many parts of the installation that you can choose to, or not to, watch.

“Still, ‘Hyacinths’ is my first one-woman show; me performing solo, without other actors,” said Nadia, who was named the ‘Best Supporting Actress (Modern Theatre)’ at the Malaysian Theatre Awards 2022 held in Kuala Lumpur in October. 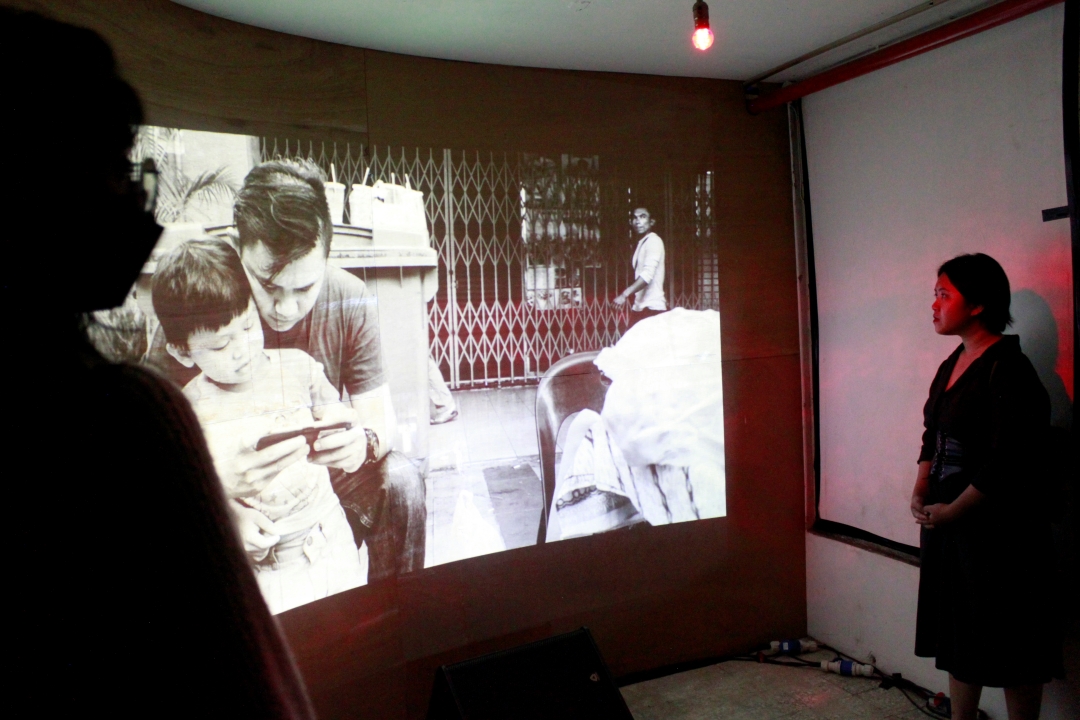 The audio-video is a part of the immersive experience in ‘Hyacinths’.

Meanwhile, when asked about the name of the play, Ling joked about it being ‘a happy accident’.

“In writing the story, Alex (Chua) was looking for a type of flower and for some reasons, he ended up with hyacinths. He just liked the sound of that name, so he titled the play ‘The Hyacinths Are Blooming’. It’s a simple story – there’s no symbolism at all.

“But upon checking, we later found out that hyacinths were said to symbolise peace – coincidentally, a fitting description. So the smart answer is: ‘Oh, Alex chose it because of that lah’!” he laughed.

On the subject of mental health for the project, Ling said it somehow ‘came out as it was intended to be’.

“The Covid-19 pandemic brought about many challenges – the isolation, the lack of interactions, the financial difficulties. All of these have been badly affecting the mental health of so many people. 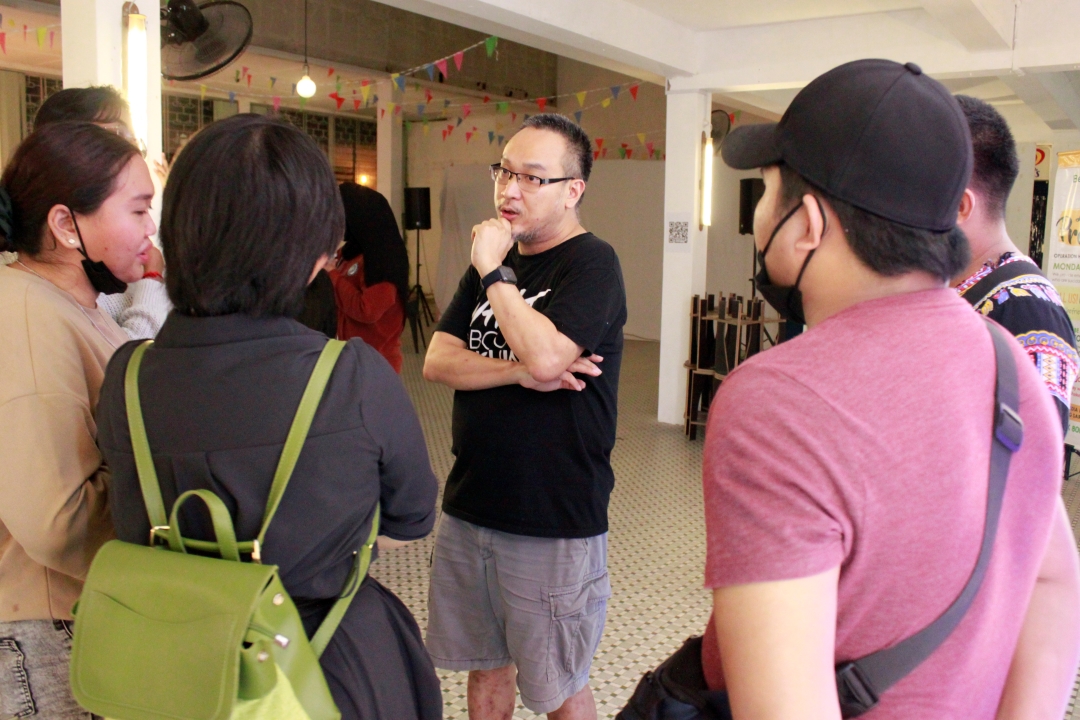 Ling (centre) being approached by some drama and performing arts students after the play.

“In this sense, ‘Hyacinths’ highlights the perspective of someone who desperately wants others to listen.

“The character ‘Nadia’, for 26 years, has not had anyone wanting to listen to her, which led to her ending up like she did in the story. My question to you is this: how difficult is it for you to really listen to someone else?

“This (mental health) is already established as being a real issue that needs to be dealt with, especially among the young people of today,” he elaborated.

Ling, whose works as a director and production designer have spanned over the last 20 years covering plays, operas and musicals staged in Malaysia, Singapore and the UK, is already moving on to his next project, which is a musical to be staged in Kuala Lumpur next month. 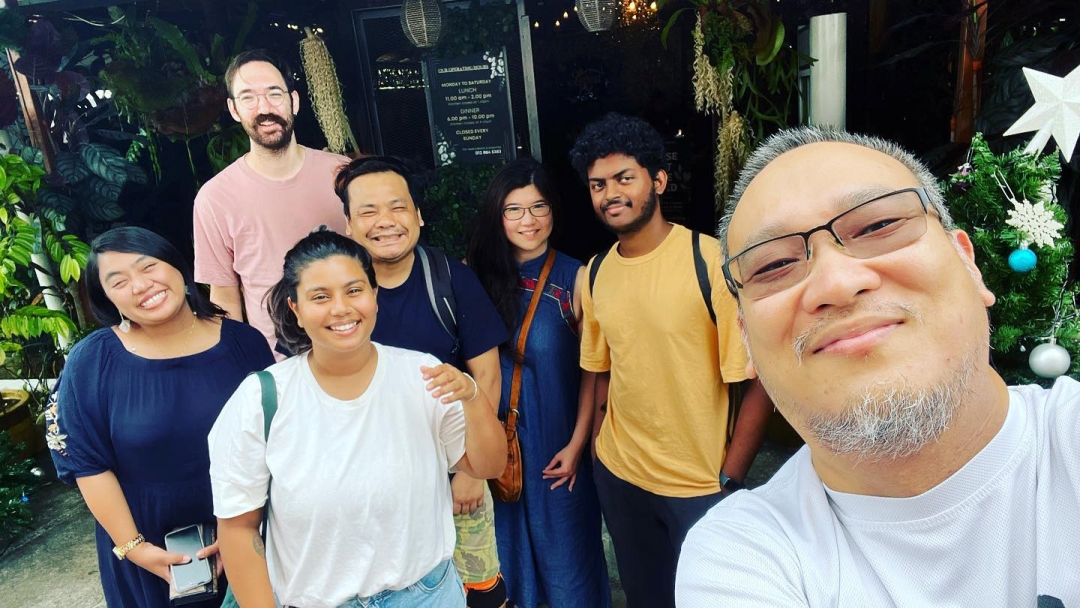 Ling (right) and Shasha (left) in a wefie with members of the ‘Hyacinths’ production team.

“It is 12th anniversary staging of Nick Choo’s Christmas musical ‘Follow The Light’, with direction and production design by me, to be running during the second weekend of December at the Nero Event Space, Petaling Jaya Performing Arts Centre in 1 Utama Shopping Centre.

“Those interested can check out http://www.facebook.com/pjpac to know more.”

For Shasha, she wanted to focus on finishing her thesis for her Master in Performing Arts (Drama) at Universiti Malaya.

Previous ArticleAfter the tears and cheers of GE15…
Next Article Special grants: Sabah is pursuing them; what about Sarawak?