Monday, January 30
You are at:Home»Features»Lawa Sultan: From lecture hall to padi farm
For the freshest news, join The Borneo Post's Telegram Channel and The Borneo Post on Newswav. Cikgu Lawa breaks the earth to rebuild the footpath to her fields, often damaged by buffaloes and wild animals.

WHEN Lawa Sultan returned to Ulu Ba Kelalan to work on the family land there following her retirement in late 2018, she was surprised to hear some of the remarks made by the villagers then.

She recalled one of the womenfolk asking her: ‘Cikgu (teacher), have you lost all your money earned from teaching? And now, you’re left with no choice but to come back and do farming like us?’

“It’s easy for most people to listen to that and think that it’s a joke.

“That woman was definitely not joking. She, and most of the women in the rural areas back then just did not understand why modern professionals would want to go back to their ancestral land and undertake farming.

“Honestly, it is only now that I can see that as something amusing. I’m very happy to be planting and harvesting padi, and see that the land belonging to my ancestors can still be put into good use,” the 64-year-old former lecturer in music told thesundaypost in Ba Kelalan. 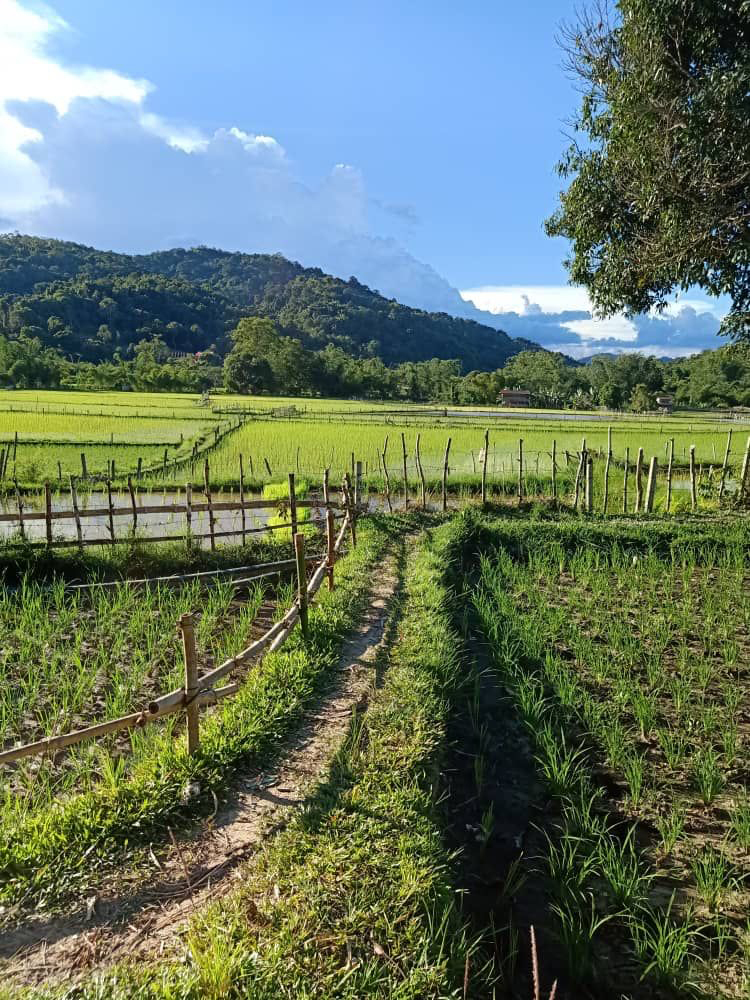 A picturesque view of Cikgu Lawa’s padi fields, which has somewhat become a must-visit spot for tourists coming to Ulu Ba Kelalan.

Despite having retired from the profession, people would still call her ‘Cikgu Lawa’.

“I don’t mind that at all,” she smiled as she continued to manually break the ground to rebuild the footpath leading to her padi field.

“The buffaloes are very clever now,” she joked. “They know how to break the barbed-wire fence with their horns and trespass on our farms, wreaking havoc over the newly-tilled fields.”

Very quickly, however, her voice turned to a more serious tone: “This is costing a lot of money, you know – for the repairs.”

There were many other challenges too, apart from the trouble caused by the buffaloes and wild animals, she said. 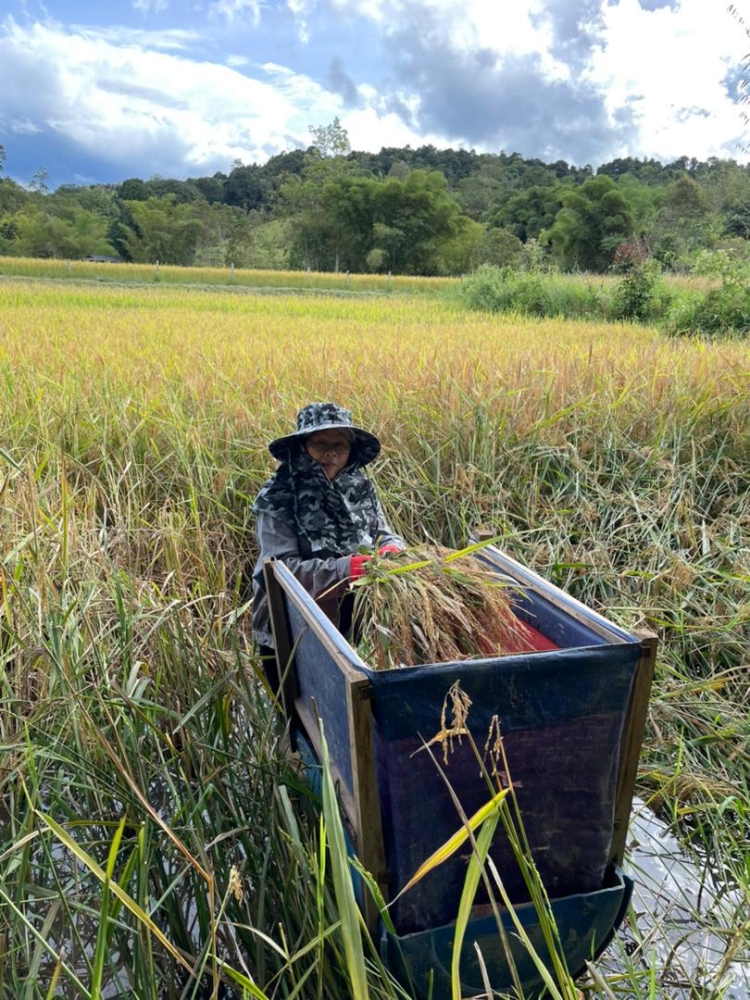 “Floods can come at the wrong time, I think most likely because of global warming.

“River pollution is also a problem.

“Rising wages present another big issue in farming. The casual workers are not easy to come by and they know that they can demand minimum wage. Those who cannot afford extra help would eventually abandon their farms.

“I hope the ministers would truly understand our plight.”

“We don’t really need fertilisers, but we do need subsidies in the forms of tools, barbed wires, and for repair works.

“Our soil and our padi are naturally fertilised by the ‘living water’ from the river.

“Taste our rice, you can tell the difference. Our rice is truly organic.” 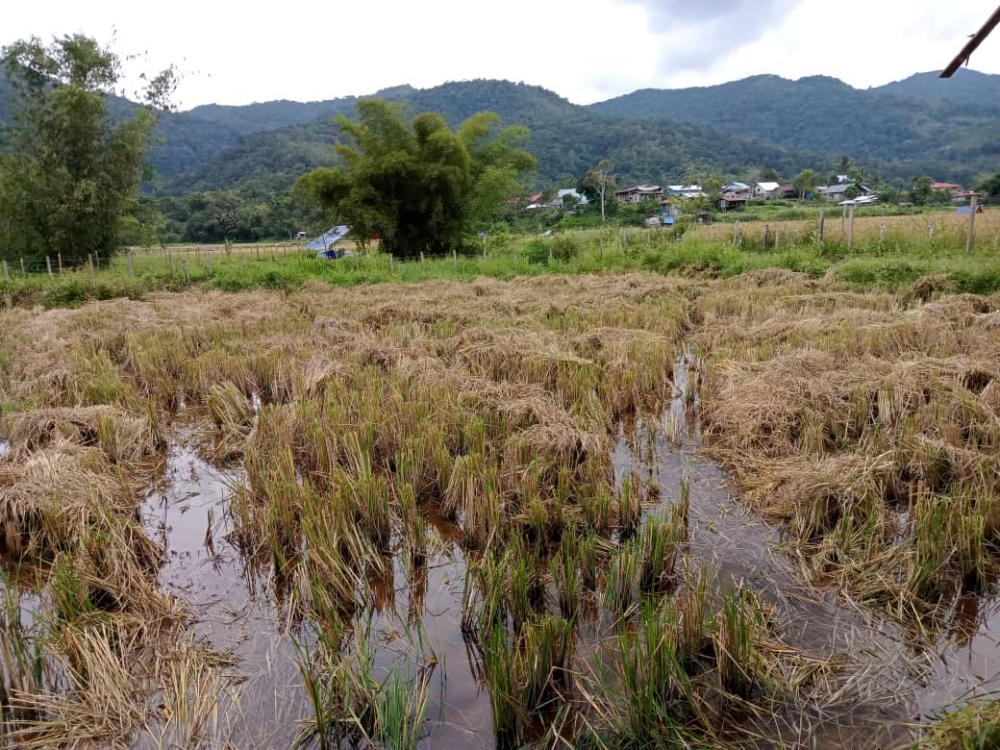 Photo shows one of Cikgu Lawa’s plots right after harvesting.

Cikgu Lawa was born in 1958. Her father Selutan @ Sultan Libang was the ‘Ketua Kampong’ (village headman) at the time.

“My father was a very strict man. He insisted that all his 10 children must attend school,” she said.

“There’s a story about this. You see, me and my friends had to walk to Lawas from Ba Kelalan before the school started. After several hours, we turned back to our ‘kampong’ because we could not catch up with the older kids.

“When my father saw us, he decided that he had to do something. He then approached the management of the small airport at Ba Kelalan, and later sent us two kids to Lawas by plane.

“It must have been a big sacrifice for him, having to pay for the airfares – this was in 1972.

“He never told me how much it had cost him.”

Cikgu Lawa then went on to complete her secondary education in Limbang in 1976 and later, enrolled to the Sarawak Teachers College in Sibu.

Her first posting was in Long Sait in Baram, in 1980, at age 22. It was also the year she got married with fellow teacher, Boyce Ngau Anyie, a Kenyah from Long Selawan in Baram who was 23 then. The couple was later blessed with three daughters.

“Like many women teachers at the rural schools in Sarawak, my baby would sleep in a sarong cradle that we called the ‘nyut’, at the back of the classroom, while I was teaching.

“I also got to learn how to speak Penan,” she recalled.

In 1982, Cikgu Lawa was transferred to SK Rumah Gudang in Marudi and later, in 1983, to a school in Bakong where her husband was the headmaster. This school had mostly Muslim Penan pupils, studying alongside their Malay, Iban and Orang Ulu mates.

She remembered how there was no teacher wanting to teach Primary 1 back then.

“So, I volunteered. At the time, the children did not attend kindergarten – they could not even hold a pencil, let alone recognise the alphabets.

“I then combined the kindergarten syllabus into the Primary 1 syllabus,” said Cikgu Lawa, adding that she was rewarded for her hard work and her colleagues lauded her achievement.

It was also in Bakong that she discovered her colleagues were growing vegetables not only to supplement their own pantries, but also for the schoolchildren’s meals.

“Our farms were so productive that we were able to barter-trade with the hawkers in Beluru.

“The teachers not only grew vegetables, but also padi. Bakong was, and still is, a good padi-farming area.

“We, the teachers, were a small community, but we’re very cooperative with one another. We all wanted to produce enough food for ourselves and our pupils.

“The contractors back then could only send us canned foods. We’re happy to have been able to provide fresh vegetables, and even meat, to our pupils staying at the hostels.

“It was a good experience for all of us. In those days, the roads were bad – we had to depend on river transport to get to Marudi, the administrative centre of the whole area (Baram).” 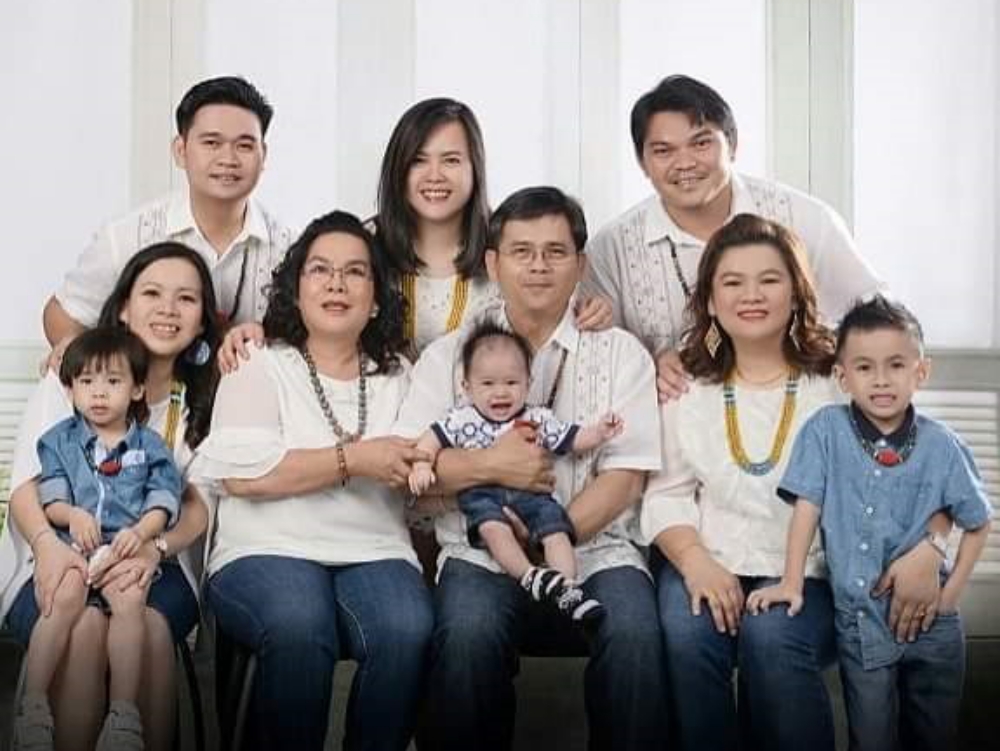 Cikgu Lawa (seated, second left) and Boyce by her side, with their daughters, sons-in-law and grandchildren.

Cikgu Lawa’s fellow villagers might have been surprised to see her coming home to become a farmer, but it was not a shock for them to see her taking up music as her main teaching subject.

In this respect, she was not shy to talk about her skill of playing the rustic bamboo flute.

“I played the flute in a bamboo band in Ba Kelalan back in the 1960s, during my primary school days. I knew I played it really well, so well that I used that skill during the audition for a music in-service course in 1997.

“The interviewer was so amazed to hear the tune that I produced with a modern flute. He exclaimed: ‘How can you play this so well when you have only been using a rustic homemade bamboo flute, as stated on your resume? Also, you never took any professional music lessons’.

Prior to that, in 1996 Cikgu Lawa enrolled to Muhammad Khalid Teachers College in Johor Bahru to take a specialist course on music, which extended to two more years at Universiti Pendidikan Sultan Idris where she and 10 other teachers graduated with their degrees.

“My experience outside Sarawak really opened my eyes to so many possibilities and dreams,” she disclosed.

In 1999, she was posted to a secondary school in Miri, where she would serve over the next 10 years. It was around this time that she also taught music part-time at the Teachers Education Institute (IPG) Sarawak Campus in the city.

“At the time, music lecturers were a rare breed.

“At my (secondary) school, I handled both morning and afternoon sessions. This led to my students asking me if I was paid double for teaching!

“I told them that if that was the case, everyone would want to become a music teacher!” she chuckled.

Cikgu Lawa, during her teaching years, remained active in performing. She was actually in a band called ‘Syukur, in which she played the flute, during her time at the Sultan Idris campus.

“Every now and then, we would perform at special occasions in Sarawak and Kuala Lumpur,” she said.

After that, she joined ‘The Mulu Bats’ of IPG Sarawak, which comprised lecturers and a few teacher trainees.

Led by Meges Laoi, the band was famous for playing instruments made from recycled materials, The Mulu Bats had performed in many events in and outside Sarawak. They even won the first prize in the ‘Music With Nature’ competition back in 2018. 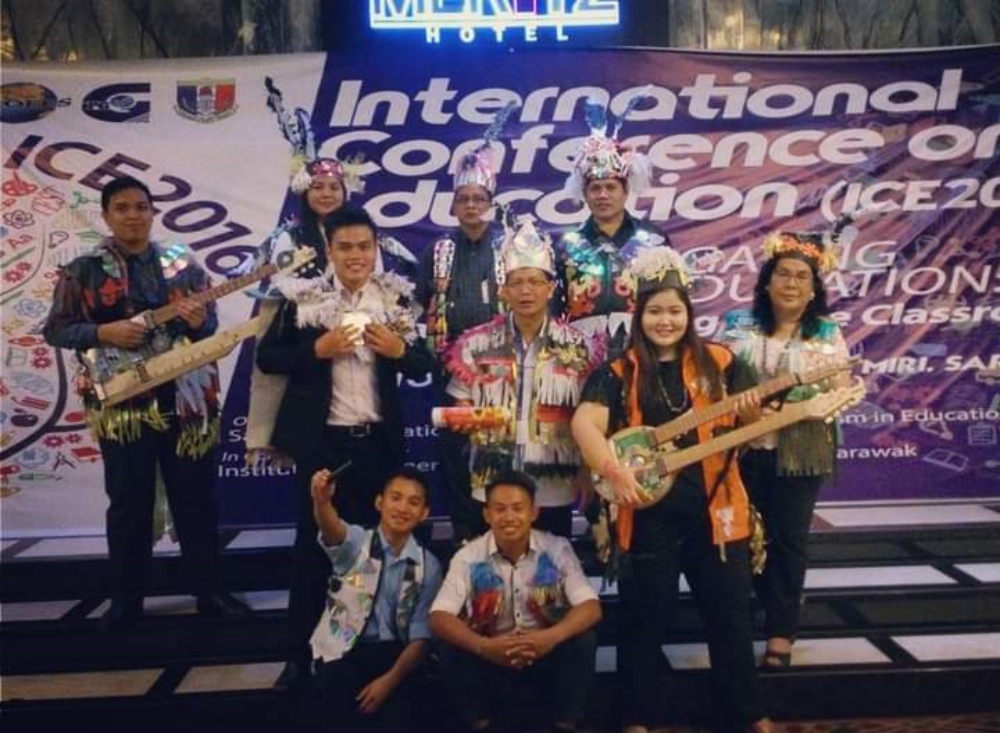 Looking back, she regarded the lecturer appointment as a ‘godsend’, in that it had brought her musical talents and experiences to a higher level.

She stressed: “Music is a very important part of our Sarawak tradition, as well as our school culture. It actually contributes to our well-being.

“The children, especially, love singing and are happy when they are surrounded by music.

“The significance of the ability to play a musical instrument cannot be underestimated – it can become a profession later on, and a hobby for life. Kids who play musical instruments actually speak a different kind of language.”

It should also be noted that Cikgu Lawa was an active member of the Sarawak Teachers Union (STU), under which she had taken part in many activities meant to help raise awareness of unionism and the welfare of all teachers serving in Sarawak.

“During my time, the STU had fought for the issuance of pension cards for the teachers, and also helped guide many to understand their rights over important matters such as insurance, claims and salary increments,” she pointed out.

Cikgu Lawa is a person who speaks from her heart, and she is proud to say that she is happy with her choice of settling down to become a farmer in an ‘ulu’ (remote) area, far from the convenience and modern amenities offered in the city.

“I am happy that I am able to manage my four four-acre plots in Ba Kelalan, which yield about 90 gunnies of rice every year.

“That’s more than enough to provide for my family, as well as my siblings and their families.

“The surplus, I would sell them to friends and customers in Miri and Lawas,” she smiled as she wiped the beads of sweat off her forehead.

For this former lecturer, she believes that the rural womenfolk hold the future of the land in Ulu Ba Kelalan.

“As our men work elsewhere, we must grow food and put it on the table.

“Our land is very precious to us, handed down from one generation to the next.

“I believe that our rice has spiritual powers, and it provides us with good health and well-being.

“I am happy to do this, and I am proud and thankful that God has given me the strength, willpower and freedom to run my own farm.

“This, my friend, is what makes my life richer than it ever was before,” she said.

Previous ArticleSweet, pungent delicacy underneath a thorny covering
Next Article After the tears and cheers of GE15…