Wednesday, February 1
You are at:Home»Columns»Exploring Sustainable Development»Achieving food security and food sovereignty
For the freshest news, join The Borneo Post's Telegram Channel and The Borneo Post on Newswav. 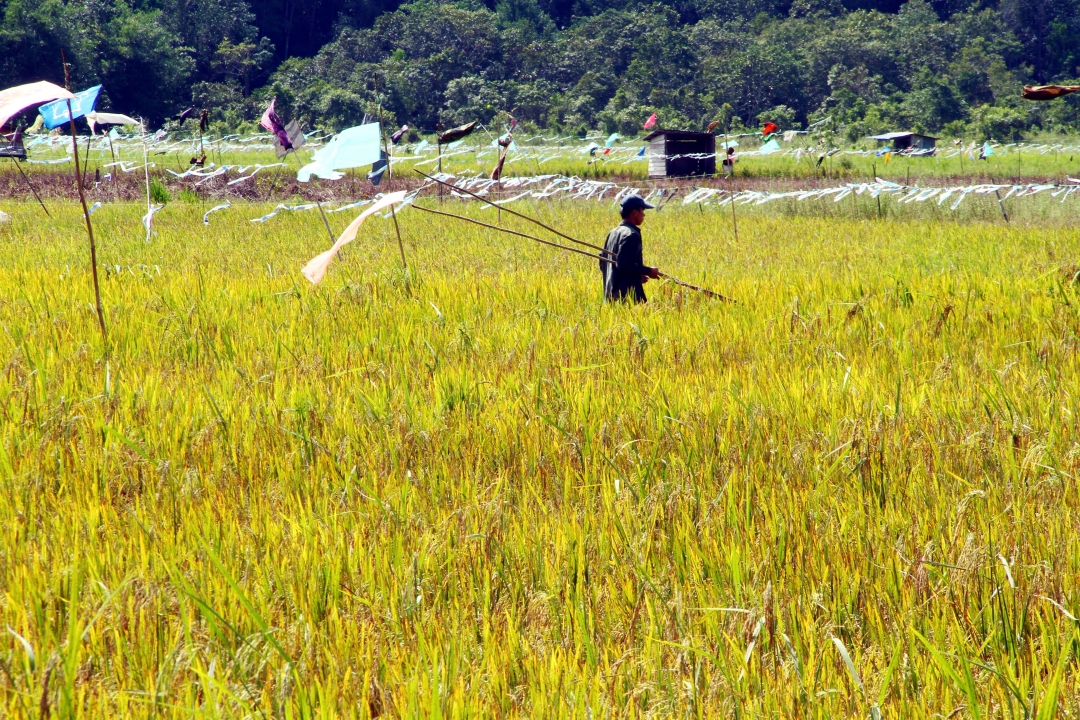 A farmer moves through a paddy field. – Photo by Chimon Upon

IN the previous article, we talked about the stories of Khrushchev and Suharto, who pushed so hard to secure food supply in their countries but failed terribly as they let politics eclipsed sciences in planning.

What exactly does ‘food security’ mean? One criterion the United Nations emphasises is “when all people, at all times, have access to sufficient, safe and nutritious food to meet their dietary needs”.

Notably, another criterion also mentioned is “food preferences for an active and healthy life.”

International trade is often regarded as a tool to ensure food security on a global scale. The flows of food from surplus regions to those in need are critical to ensure food supply. In fact, the existence of the food trade has been shaping our demography.

The case of rice supply in Malaysia is a good example. Our country has limited land areas for rice cultivation. Most of our rice production concentrates in our ‘rice bowl’ in the northern part of the peninsula.

However, considering our rice production capacity, the country’s population has grown beyond the theoretical limit. How did this happen? Imports.

Malaysia is highly dependent on imports for its rice supply, with nearly one-third coming from abroad, especially Thailand and Vietnam. Also, per capita consumption of rice has been decreasing as we have been gradually diversifying our diets with other imported food, such as wheat. (Side note: Japan has close to 100% rice self-sufficiency, but it is not necessarily a good thing.)

We can see that the concept of food security does not consider the asymmetry of power in the food markets, which large producers and economically powerful players dominate. At the international level, such a situation raised many concerns during the pandemic when food producers like Vietnam attempted to limit their rice export. National food security has then become the main agenda item in many countries and regions that rely heavily on food imports.

What also missing are the human and environmental elements, i.e., how food is produced and consumed in social and cultural contexts and how agriculture co-exists sustainably with nature.

With the intensive use of fertilisers, pesticides, herbicides, and genetic technologies, industrial agriculture has been promoted to ensure enough calories, protein, and fats are produced to feed the people. However, over-reliance on industrial development has greatly shrunk the space available for other food production systems, homogenising our diet and reducing our food choices.

Globally, major crops like corn play a key role in combating world hunger. However, the homogenisation of the food supply also increases health risks associated with a low-diversity diet, such as obesity. The proliferation of grocery stores in rural areas has driven the growing consumption of processed food like instant noodles and drink mixes which are high in sodium and sugar. Personally, I have seen some kampung folks rely heavily on Indomie as their staple.

Furthermore, poorly governed large-scale agricultural expansions have imposed severe threats to nature. Much of the food we put on the table today has links to water pollution, deforestation, and land degradation.

To close the gap, the concept of ‘food sovereignty’ was brought forward to address the missing elements of ‘people’ and ‘rights’ in the previous discussion. It was first introduced in 1996 by La Via Campesina, an international farmers organisation, at the World Food Summit.

In contrast to the current food regime controlled by corporations and institutions, people’s autonomy in food production, distribution, and consumption are deemed the key to achieving food sovereignty. The environmental element is also frequently mentioned, stressing the importance of putting ecologically sound production systems in place. Governments and organisations like the World Bank and United Nations have adopted the concept in discussing and designing agricultural and food policies.

Six elements embedded in the concept of ‘food sovereignty’ could be relevant to places like Borneo.

First, it advocates placing the focus of food policy on people’s needs, as food production is considered beyond just a business but the basis of people’s well-being. Borneo’s policymakers may want to shift the emphasis from commercial agriculture as in the past to producing quality food for all the people.

Second, the concept also suggests that small food providers should be given sufficient assistance and recognition. In Borneo, small-scale farming, fishing, and gathering contribute to the diversification of food supplies. Female members of the communities also contribute significantly to providing food.

These food sources may need to be acknowledged by policymakers as a critical component in achieving Borneo’s food security.

The third element connects well to the second one, proposing that food systems should not overly rely on long-distance food supply but on utilising what is available locally.

Given the low population density in many parts of the island, the policymakers in Borneo may have to think carefully about transforming the food systems in local contexts. This point is also closely linked to plastic waste pollution in rural areas, where processed food in plastic packaging (particularly instant noodles, snacks, and various 3-in-1 drinks) has been increasingly replacing the traditional food supply.

In addition, the fourth element is about empowering local food suppliers in managing the landscape. In the past, local communities in Borneo were often left out of the discussions and decision-making processes of large-scale land use planning. Food production to serve local needs, instead of only commercial agriculture, may have to be given extra attention in future planning.

Fifth, the concept also promotes the retaining and (re-)adopting traditional knowledge in food production. It emphasises the importance of traditional practices that account for the relationship with nature and local culture.

There have been efforts in the documentation of traditional knowledge in utilising food and biological resources in Borneo, with Sarawak Biodiversity Centre as one of the prominent examples.

Finally, food sovereignty co-exists with nature. The key idea is prioritising the resilience of the food production systems over productivity. The nature of Borneo provides various critical ecosystem services to the people. The question will be how to maximise the benefits from and minimise the impacts on ecosystem service in securing food supplies for the people.

The concept of food sovereignty is complementary to food security, as it embodies the human dimension with an emphasis on the relationship between people, food, and nature.

In practice, it can be very challenging to steer the direction of ongoing food system transformation from business-as-usual (i.e., the conventional trajectory of industrialization) to a more sustainable and healthier one. However, it may not be impossible with visionary policies.

We have seen a growing resistance from consumers against not nourishing, unhealthy food from large-scale industrial farms. We have also seen numerous bottom-up, agro ecological-based farming schemes being established around the world to seek more nutritious (and delicious) alternatives, including examples in Borneo.

Hopefully, innovations in both scientific advances and business models will enable more sustainable food systems that preserve the flavours of Borneo and achieve real food sovereignty.

Dr Goh Chun Sheng is a researcher at Sunway University and Harvard University. He is interested in exploring the bio-economy and the nature-based economy in Borneo.