Wednesday, February 1
You are at:Home»Columns»Plastics, plastics everywhere
For the freshest news, join The Borneo Post's Telegram Channel and The Borneo Post on Newswav. 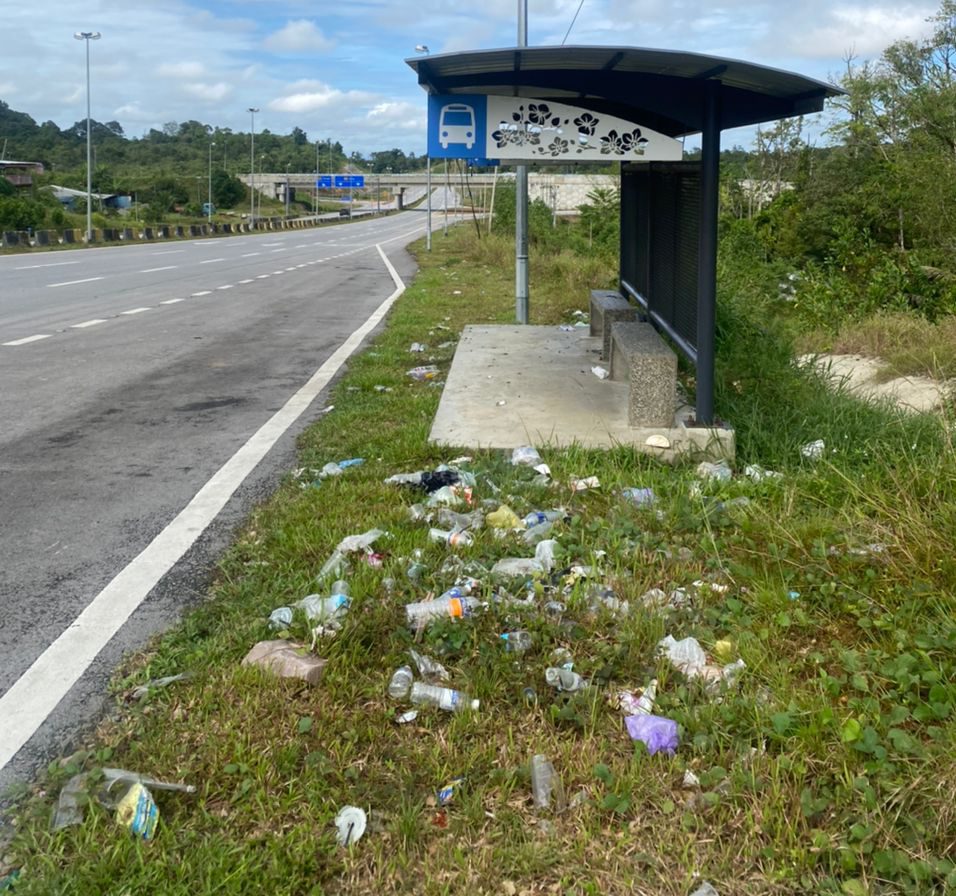 A photo speaks a thousand words. This one, taken along the Pan Borneo Highway, shows a bus stop with rubbish strewn around it.

SARAWAK is a country long known as a tourist destination.

Visitors sit for hours on a longboat on the way to a longhouse and, after dinner, join in a long dance.

All very nice and picturesque, right? But unfortunately, tourists will also have a long memory of the plastic and general rubbish that they see in our rivers.

I have seen rubbish on the banks of the Skrang and the Katibas. It is true that this was five years ago. By now, these rivers could have been cleared of the non-degradable materials – have they?

Can somebody enlighten me, please?

A portion of the Pan Borneo trunk road from Telok Melano and Miri has been completed. Road users have told me that they have been travelling comfortably, enjoying the green scenery of the countryside and looking forward, one day in the near future, to driving all the way to Sabah.

Didn’t they notice the trash?

Someone sent me a couple of photographs of plastic food wrappers seen at several spots between Kuching and Simanggang to prove that there was littering there.

Who could have done that?

The thousands of drivers who enjoy a smooth journey on the new road, that’s who.

‘Don’t drop empty drink bottles and snack packets in your car – open the window and throw them out!’

People waiting at the roadside bus stops are happily sipping and snacking. When the bus finally comes along, they quickly throw wrappings and bottles on the ground – can’t make a mess in the bus, can we?

The sender of the photos warned me: “This must not be seen by the tourists, Uncle. They have a long memory on their journey home.”

Tourists or no tourists, we must look after our environment, not just for them because of their dollars. It is our fundamental responsibility to keep our country clean for the health of our own people.

Health-conscious and civic-minded people have been talking about doing away with the use of plastic cups, plates and drinking straws for years. Yet the human habit of littering dies hard, in the absence of the effective application of any regulations.

In Singapore, it was regarded as a draconian act when the government of the republic implemented an anti-littering law. It imposes a heavy monetary fine on anyone caught littering on public places there.

Malaysia has not strictly implemented regulations regarding littering because the local authorities have not been proactive for fear of losing political support. In September last year, The Borneo Post (Sept 22, 2021) quoted a medical doctor saying that ‘major services from local authorities in Sarawak have declined over the year’.

Being a doctor, he was pointedly referring to the public health service.

I think that it is high time we adopt some regulations a la Singapore’s. Initially, it may not be politically popular, but it will be good for the country in the long run.

What about starting a project to clean our rivers of plastics and other rubbish, and at the same time of sending a strong message to the local authorities to strengthen their role in rubbish disposal?

In 1962, our leaders in Sarawak made the retention of local government, introduced to Sarawak in 1948, a condition of merger with Malaya in the Federation of Malaysia.

Now we know they had their point.

I suggest any one of these local authorities, seriously treating littering as a health hazard, should tighten any existing by-laws governing rubbish disposal, and that all these by-laws should be coordinated among all the councils.

If there’s no specific regulation with which to deal with the plastics problem, then be innovative – write one.

Local councils and the environment

Years ago, I attended a lecture on ‘Local Government in Sarawak’ given by an officer from the Ministry of Local Government. He said that every inch of Sarawak was under the jurisdiction of some local authorities, except for Bintulu.

Bintulu has its own government in the form of the Bintulu Development Authority (BDA); inter alia, BDA has power and authority to deal with rubbish disposal.

Very well, we can take it that every inch of Sarawak is under the jurisdiction of a local council or a statutory body. So why the problem of applying the by-laws? What’s happening?

It is interesting that the federal Ministry of Local Government Development has responsibility over ‘development’ as a component of the portfolio.

At the time of writing, I had yet to read about what or how these two ministries would synergise their policies. I hope that the ministers would look into the possibility of reviving the local government elections in Malaysia, beginning with the resurrection of the elections in Sarawak, which were abolished in 1981 for no good reason.

My friends will probably sigh, ‘there he goes again!’, but I am serious. We would be better represented, and in the end, better managed at the local level, if the local councils were elected by the public they’re designed to serve.

Back to the highway and the rivers

Just flashing in my mind – the newly-minted federal Minister of Works Dato Sri Alexander Nanta Linggi should drive on the Pan Borneo Highway from Kuching to Sibu and from there, to Kapit.

No helicopters please, just use the road we all use!

And for the honour of Sarawak, I hope that all the plastics along the long and winding road would have disappeared before he passes by.

After that the Ministers of Tourism, federal and state, should make a joint riverine trip to Skrang. All the plastics would have disappeared overnight, the people from the travel agencies making sure that the river would be as clean as it was in the days before plastics was invented.

Previous ArticleSignificance, symbolisms of Lunar New Year
Next Article Over 200 stalls to be set up for MBKS Chinese New Year Bazaar