Saturday, January 28
You are at:Home»Features»Committed to lifelong crusade of caring
For the freshest news, join The Borneo Post's Telegram Channel and The Borneo Post on Newswav. 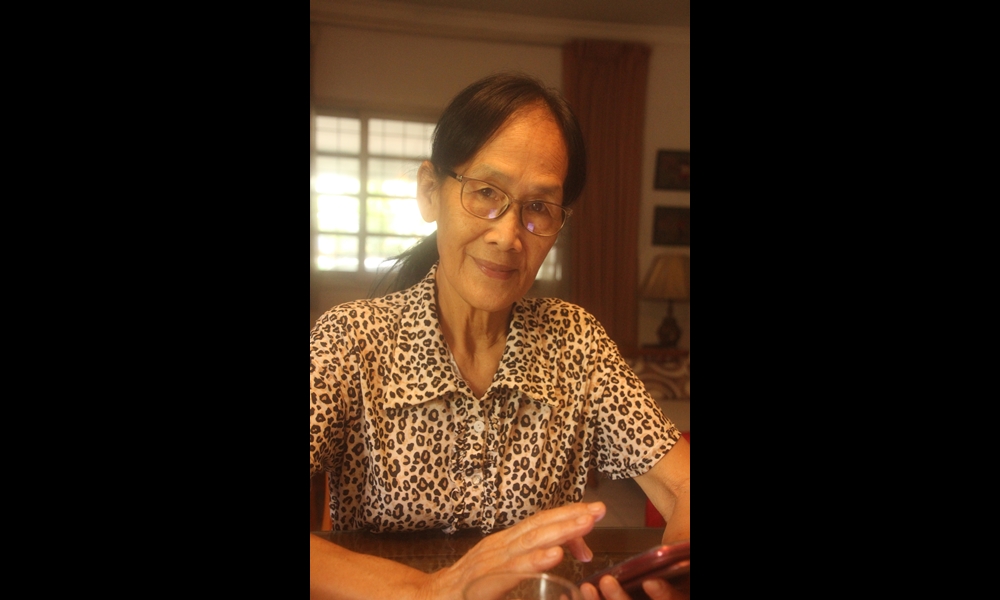 Susan says nurses are not only trained to care for patients’ physical and medical needs, but they also go beyond that, empathising with compassion and helping the patients through emotional challenges.

AT 70, Susan Sipai has not stopped caring.

She still makes home visits to give advice on palliative care, bringing love to the dying and giving moral support and encouragement to the carers and family members.

“I have a burden on my heart for the sick,” says the retired sister nurse.

Susan, who cuts a friendly figure in her slim build, recalls how she wanted to call it quits when she retired 12 years ago.

She was looking forward to enjoying her freedom, spending more time with her grandchildren and also her extended family.

“I had a feel of all those at the beginning of my retirement. I was very comfortable staying at home with no worries about work or having to attend to it. I was so free and I never thought of working again.”

She was 58, the official retirement age then. The new pensioner appeared youthful and energetic, like many active women her age.

As a nurse, she was dedicated, caring, and compassionate.

Her nursing career began when she was an assistant nurse with the Sarawak General Hospital (SGH) in Kuching after completing a two-year nursing training programme.

Ten years later, she was promoted to senior assistant nurse and then staff nurse upon completing her diploma in nursing.

Later, she was promoted to nursing sister, a post she held until she retired.

In the course of her career, she had been conferred the ‘Pekerja Cemerlang’ (Excellent Employee) award four times separately by the government. It was little wonder that as she was about to sit on her laurels after retirement – she received a number of offers from colleges to teach in their respective nursing faculties as a clinical instructor.

The offers looked attractive to Susan. For one thing, she loved sharing knowledge, particularly on health care and helping people. Also, she was known for her caring nature. 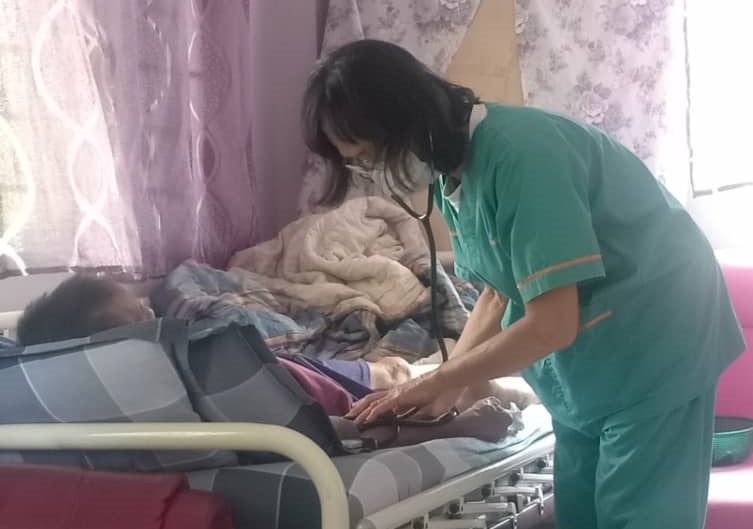 Susan taking her patient’s blood pressure on one of her visits.

She went beyond the hospital to reach out to families of the terminally ill, giving advice on proper health care or how to cope with disability or death, comforting both family and the sick, and praying for them when she was still in the medical field.

All of this she did on her own volition and out of compassion.

When she received calls from the colleges offering her the post, she felt like being ‘torn between two lovers’.

On the one hand, she enjoyed her traditional retirement, but she also enjoyed reaching out and helping others.

In her many moments of thought, she was relieved to realise that if she accepted the job, she could have the best of both worlds. She envisioned herself as a clinical instructor, imparting knowledge, instilling a caring and altruistic spirit in nursing students, and positively impacting their lives.

It was a calling she could not easily resist.

She was also convinced that if she managed her time properly, the vocation would not deprive her of the joy of spending more time with her close-knit family.

She was also thankful for her excellent physical condition, which contributed to her positive decision. She had made up her mind to serve at SEGi College Sarawak.

Susan had yet to confirm her acceptance of the offer when she received a phone call from the college requesting for her to teach the following week.

“When I went there to meet the management, I was surprised to find my name already written on the staff duty roster.

“I hadn’t even given them my reply!”

Susan taught at the college for two years before she accepted another offer to teach at Universiti Teknologi Mara (UiTM), also for two years. As her record in both colleges showed, she was a down-to-earth and dedicated clinical instructor, highly regarded by her students and colleagues.

Susan was not only their clinical instructor, but also a mother figure to her students. They addressed her as ‘indai’ (Iban word for mother) as she would affectionately call them ‘anak’ (children, which in the native language is a common term of endearment).

It was her pleasure to bring out the best in her students as she worked tirelessly to prepare them to be frontline health workers dedicated to their profession. 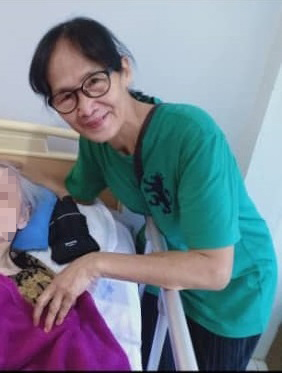 Susan with a patient, who is an octogenarian with Stage 4 cancer.

With her caring disposition, Susan taught by example demonstrating loving care and genuine concern towards patients during the practical training of the students at hospital. She herself had earned the ‘Best Practical Student Award’ when she was still a nursing student at the age of 18.

“What I mean by this is we have to be attentive to details. For example, when I walked through the wards with the students, sometimes I noticed that the device (nasal cannula) used to administer supplemental oxygen was misplaced.

“Instead of resting in the nostrils, they had shifted to the back of the patient and nobody noticed it.

“Then they increased the oxygen level while the nasal cannula was misplaced. They might have forgotten to put it back and nobody had noticed.

“That was why I would always tell the students to see what others couldn’t see… and make sure things like that would not happen.”

Susan was thinking about retiring after four years as a clinical instructor because she felt her age was catching up with her. But when Two Tree Lodge Hospice, a non-governmental organisation (NGO) providing palliative care to terminally ill patients and their carers or families in their homes, approached her, she could not say no.

Care for the terminally ill

“When Dr Winnie Ling, a key member of the hospice offered me the job, it was hard for me to say ‘no’ knowing that she really had the heart for patients, especially the terminally ill such as advanced cancer patients needing palliative care.

“So I took the job. I would visit the patients’ homes four times a week to educate their families on palliative care, offering emotional support and so forth. But later, I reduced the number of my visits to two or three times weekly because of other commitments and also age was catching up with me.”

Today, the grandmother of 15 grandchildren is still making her rounds albeit once a week.

“I normally give pastoral care to the patients and their families, helping them cope with their emotional and spiritual issues now.”

Nonetheless, her concern for the sick is unwavering, as she continues to serve voluntarily whenever she is required.

“I will be there as long as God gives me the strength. When I look at the sick, I look at myself or my mother or any of my loved ones.

“I put myself there and imagine how it is like if it were me. 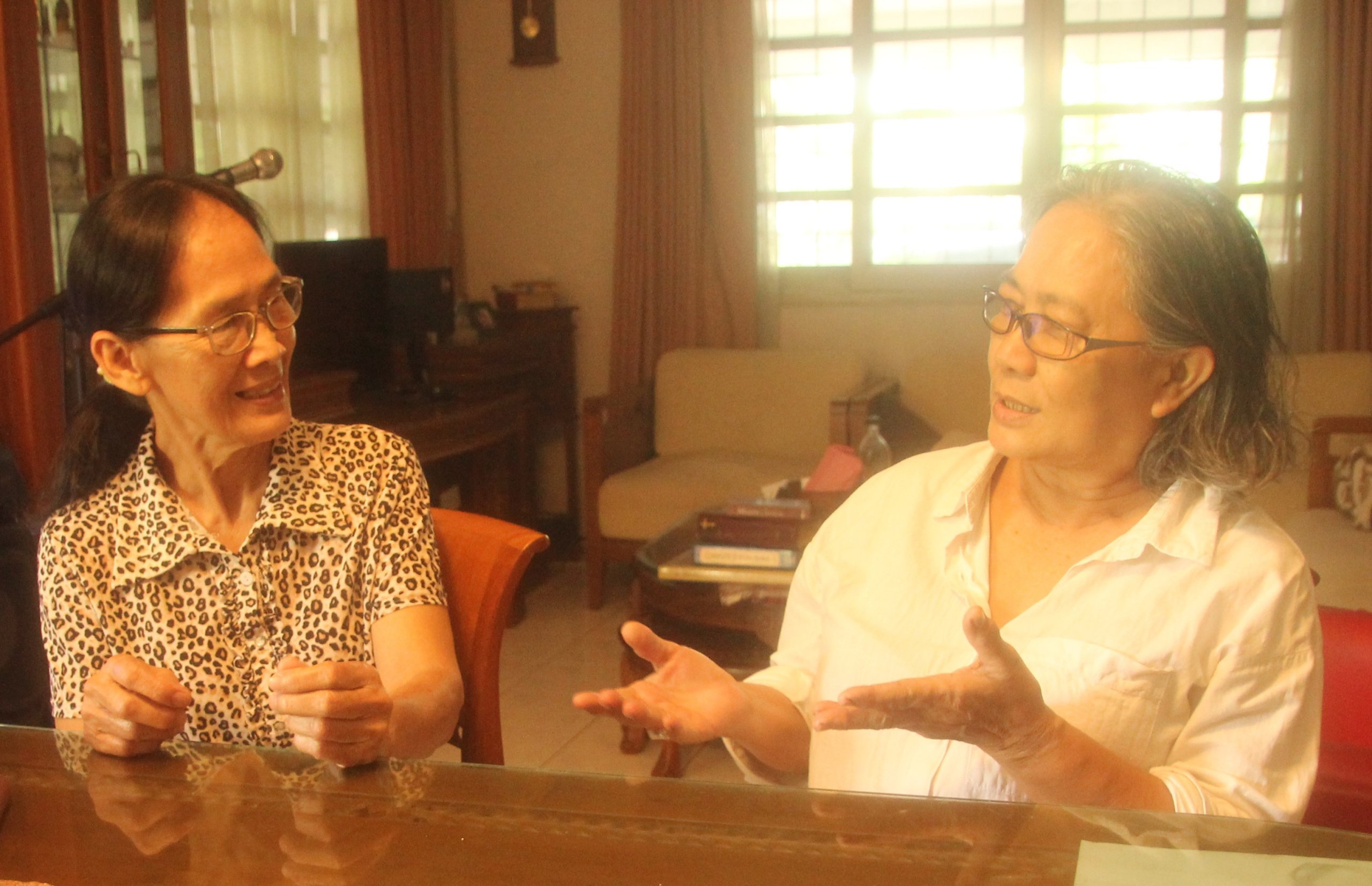 Susan chatting with the writer.

“We are not only trained to care for patients’ physical and medical needs. We go beyond that, empathising with compassion and helping them through emotional challenges.

“We are grief counsellors and hand-holders.

“When I was in SGH, there were people who asked me why I was so close to the patients and why I had to counsel them when they were even not my relatives. But it’s only right and should be normal for us to be kind to one another.

“One day, we may be in their position being sick and helpless and needing the same care and loving touch.

“Everyone needs someone —it is a fact.”

In her long career as a nurse, Susan has seen many patients dying.

“I don’t want to say I’m used to it. I can never be used to it. Every human life is precious.”

A Lun Bawang born and bred in the highlands of Ba Kelalan, Susan came from a God-fearing family.

“I never thought that I would be a nurse, a profession I did not know of then. Being a ‘kampung’ (village) girl, I had never even been to a hospital. All I wanted was to stay in Ba Kelalan to be with my parents, get married and take care of my husband and our children.”

Susan was a fresh school-leaver when a medical assistant at the village clinic told her father that the general hospital in Kuching was looking for school-leavers to be trained as nurses.

It was her father who wanted her to be a nurse. He had to send her to Limbang for the interview.

“I remember what my cousin told me as I prepared myself for the interview: ‘If they ask you why do you want to be a nurse, just say that you want to take care of the sick’.

“So that was what I told the Matron who interviewed me.”

Susan left home for Kuching to train as a nurse. She found the training to be tedious at first because she had no desire to be a nurse. It was not until she began her practicum in the wards that she was drawn to the noble vocation.

Brought up in praying family

“When I looked at the sick in the hospital, my heart was moved with compassion for them.

“I grew up in a praying family. Seeing the sick, dying, and death brought me to my knees.

“I kept praying, asking God to strengthen me and teach me what I needed to know about nursing.

“That was the first year of training, and the rest, as they say, is history.”

Susan now looks back with a sense of fulfilment, grateful that she had stepped out of her comfort zone 50 three years ago to go into nursing in line with her father’s wish.

There, she found her passion out of a heart that cared. 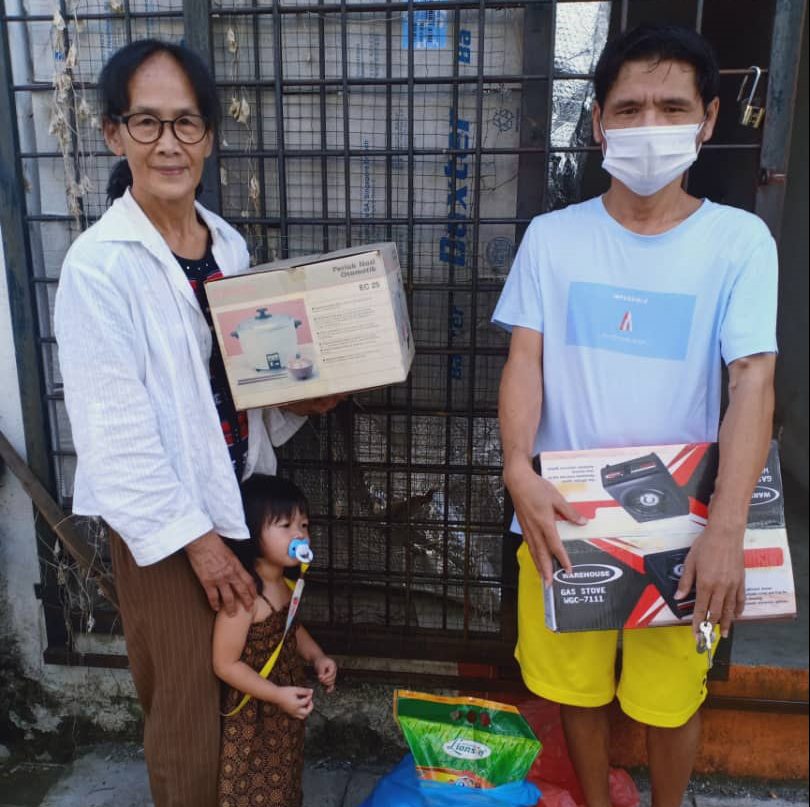 Susan has been caring for Ambrose (right), a kidney failure patient, as her foster son for 20 years. Also in the picture is her granddaughter, Luna.

With her genuine concern for others, Susan has been fostering a poor child named Ambrose suffering from kidney failure for 20 years now. She receives help from Life Care Society where the boy is given a room to stay.

Ambrose, who is from Sri Aman and is currently receiving dialysis three times a week, is fine, though weak and unable to walk.

“Somebody asked me why I cared so much about the boy, and I replied: ‘If I don’t care, who will?’

“Yes, I will carry on caring as long as the Lord gives me the strength. I see there’s a need for carers and my heart goes out to the highly dependents, the terminally ill, the frail aged.”

To Susan, every human life is valuable, and how they are treated in their final moments is critical.

If nothing else can be done, she must find the appropriate words to prepare them for their departure.

Previous ArticleConsumer staples: A recession-resistant defensive play for 2023
Next Article Tradition that brings folks together