Wednesday, February 1
You are at:Home»Business»BizHive»Consumer staples: A recession-resistant defensive play for 2023
For the freshest news, join The Borneo Post's Telegram Channel and The Borneo Post on Newswav. 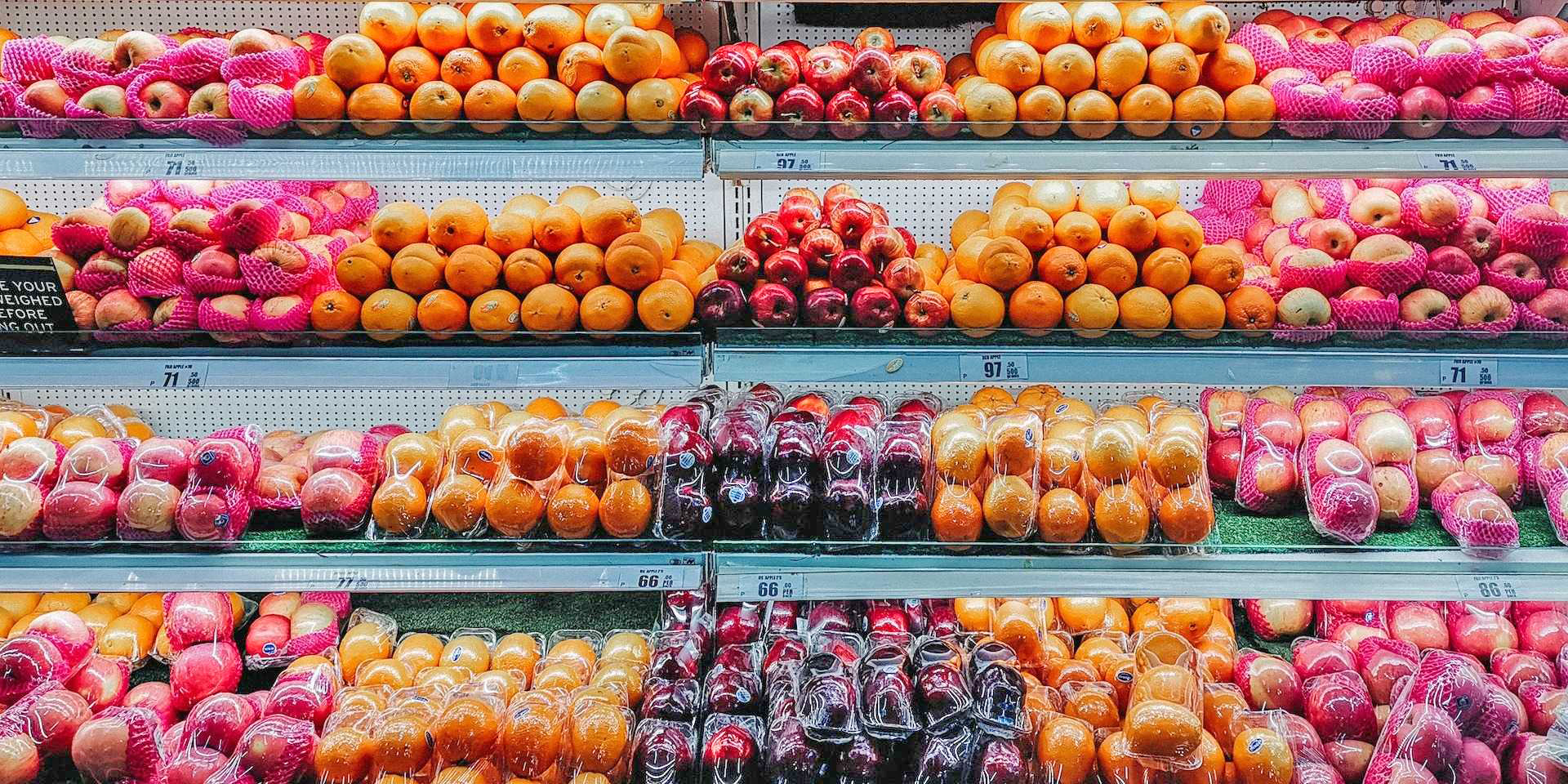 The US consumer staples sector has been fairly resilient throughout the year despite the challenging equity backdrop.

Margins are also holding up despite rising costs. Companies have cut back on sales and promotion as a consumer trade-down anchors demand. Alongside price hikes, this has protected margins as input costs rise. 3Q earnings’ positive sales and sales surprises continue to highlight resilient margins in 3Q earnings.

A strong track record for earnings and outperformance before and after the start of a recession add to the sector’s reliability as a strong recession play. Valuations are slightly rich but earnings resiliency during a recession may provide support.

In a year when markets have been sinking under the weight of inflation and jumbo rate hikes, the consumer staples sector has been a life raft for investors. Being defensive in nature, the sector has largely been shielded against waves of drawdowns and volatility while many others were badly battered.

As global growth sours and the drumbeat of recession grows louder, we are increasingly leaning towards quality and defensive plays that can provide shelter from the impending storm. We believe the US consumer staples sector is one of them. 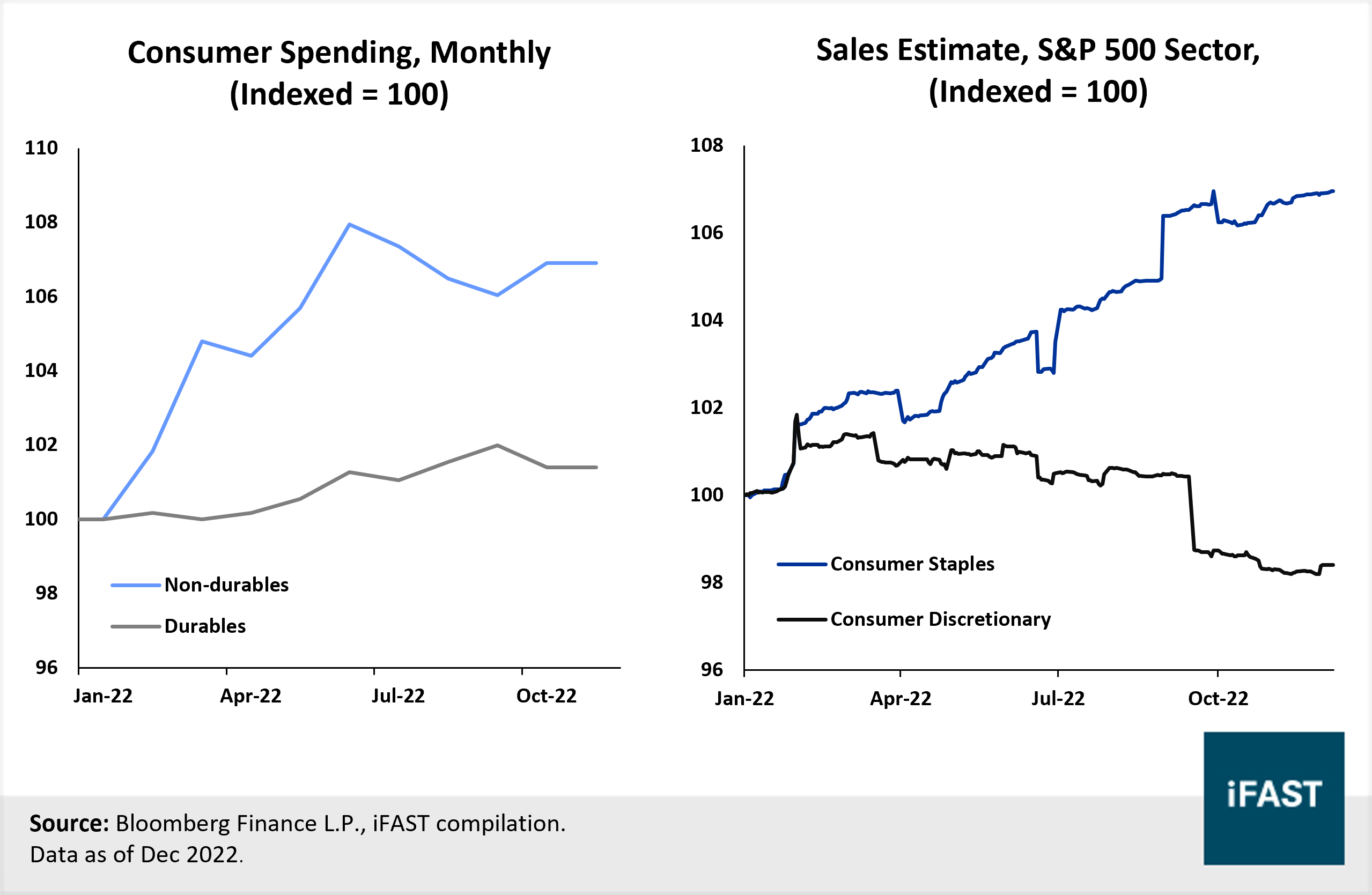 The impact of consumer trade down is visible in spending data and sector sales estimates. 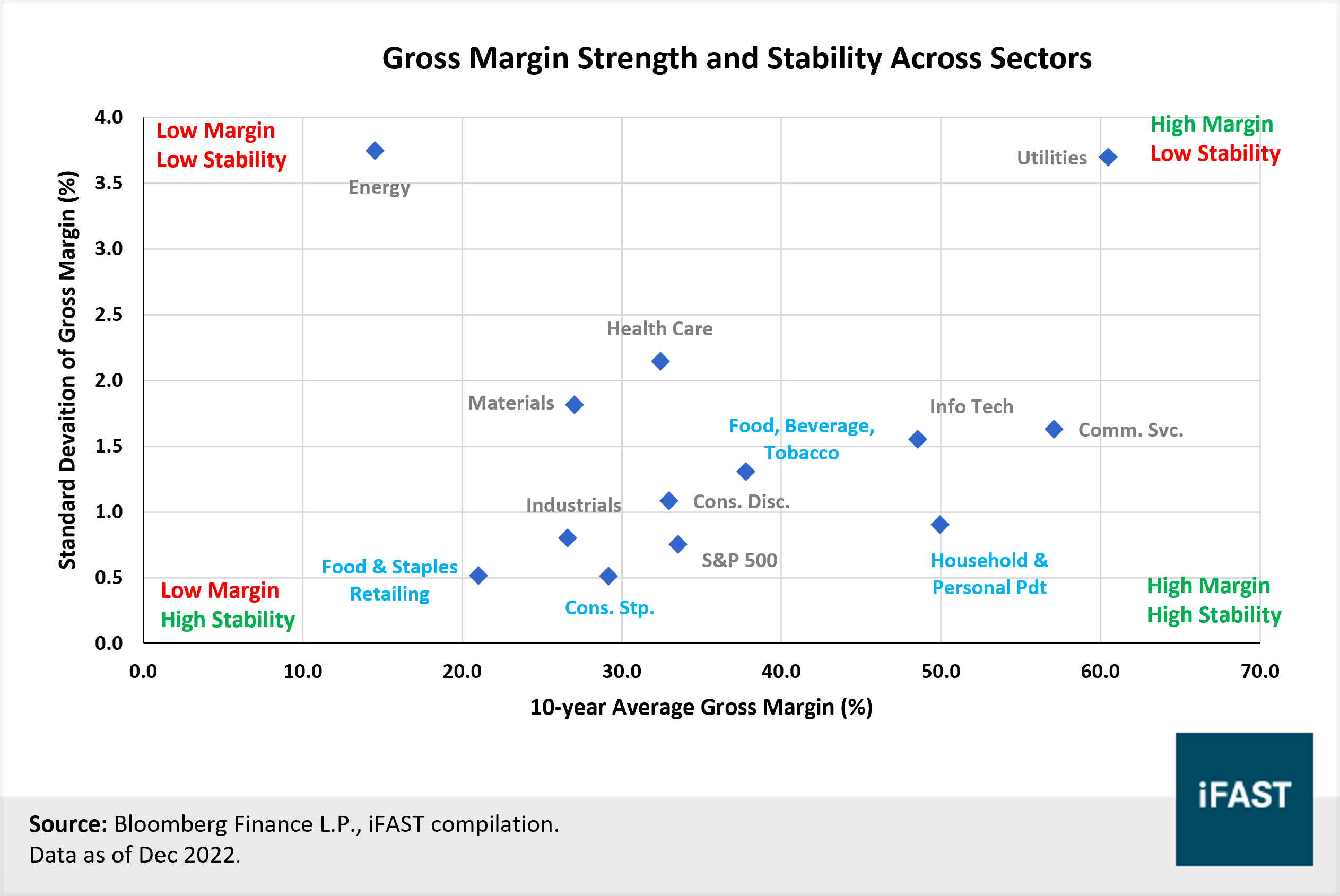 Consumer staples sector in a nutshell

The consumer staples sector comprises companies with primary business activities in i) food and staples retailing and distribution, ii) provision of food, beverage, tobacco products, and iii) manufacturing of household and personal products.

In the US, the food, beverage, and tobacco industry makes up the lion’s share of the US consumer staples sector (51 per cent), led by multinational industry leaders like Coca-cola (KO), PepsiCo (PEP), Phillip Morris (PM), and Mondelez (MDLZ). Next is the food and staples retail industry (28 per cent), led by retail giants such as Walmart (WMT) and Costco (COST). The household and personal products industry (21 per cent) follows closely behind, led by global names like Procter and Gamble (PG), Estee Lauder (EL), and Colgate (CL).

The US consumer staples sector has been fairly resilient throughout the year despite the challenging equity backdrop. It is the second best-performing sector, behind the energy sector, returning two per cent year-to-date and outperforming the S&P 500 index, which has fallen by -13 per cent so far this year (as of end-November).

A common theme across the sector’s 3Q’s result is the observation of a consumer trade-down from pricier, premium goods to cheaper, value-for-money goods as rising prices crimp disposable income. Companies have reported that the trade-down, which we believe is still in the early stages, has helped kept demand firm.

For instance, Walmart was able to deliver better earnings results than Target, as a larger share of its sales came from groceries which often benefits from a consumer trade-down given its inelastic and essential nature.

This is in line with consumer spending data, which showed non-durable spending still growing but spending on durables have remained lacklustre. At the same time, sales estimates for consumer staples firms have been climbing while that of the consumer discretionary sector has been declining.

Looking ahead, with incremental stress on household income and a likely rise in unemployment rates, the trade-down trend will likely be full-blown next year, providing a strong counter against the softening demand from weaker global growth.

Another common trait within the sector is the strong pricing power observed in many companies amidst this high inflation backdrop. This can be measured by the gross margin and margin stability across the business cycle, as companies with pricing power are better able to protect and maintain their gross margins.

We see this from consumer staples and its underlying industries where gross margins have remained stable at around the market average over the past decade. Factors such as brand strength, low product elasticity, scale of economies, and effective low-pricing strategy have contributed to the sector’s strong pricing power, enabling most companies to hike prices without harming sales and market share.

Ih a growing consumer trade-down trend, keeping demand for staples firm, and strong pricing power to protect sales, we expect a higher degree of earnings resiliency in the consumer staples sector relative to the market and other sectors. These factors are likely to protect earnings even amidst a backdrop of high inflation and softening global growth. 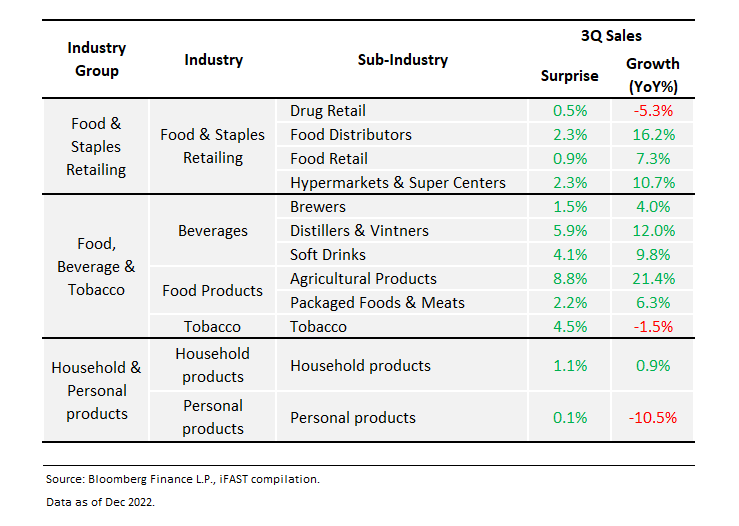 Sales growth and sales surprise for the sector remained largely positive in 3Q despite the high inflation. 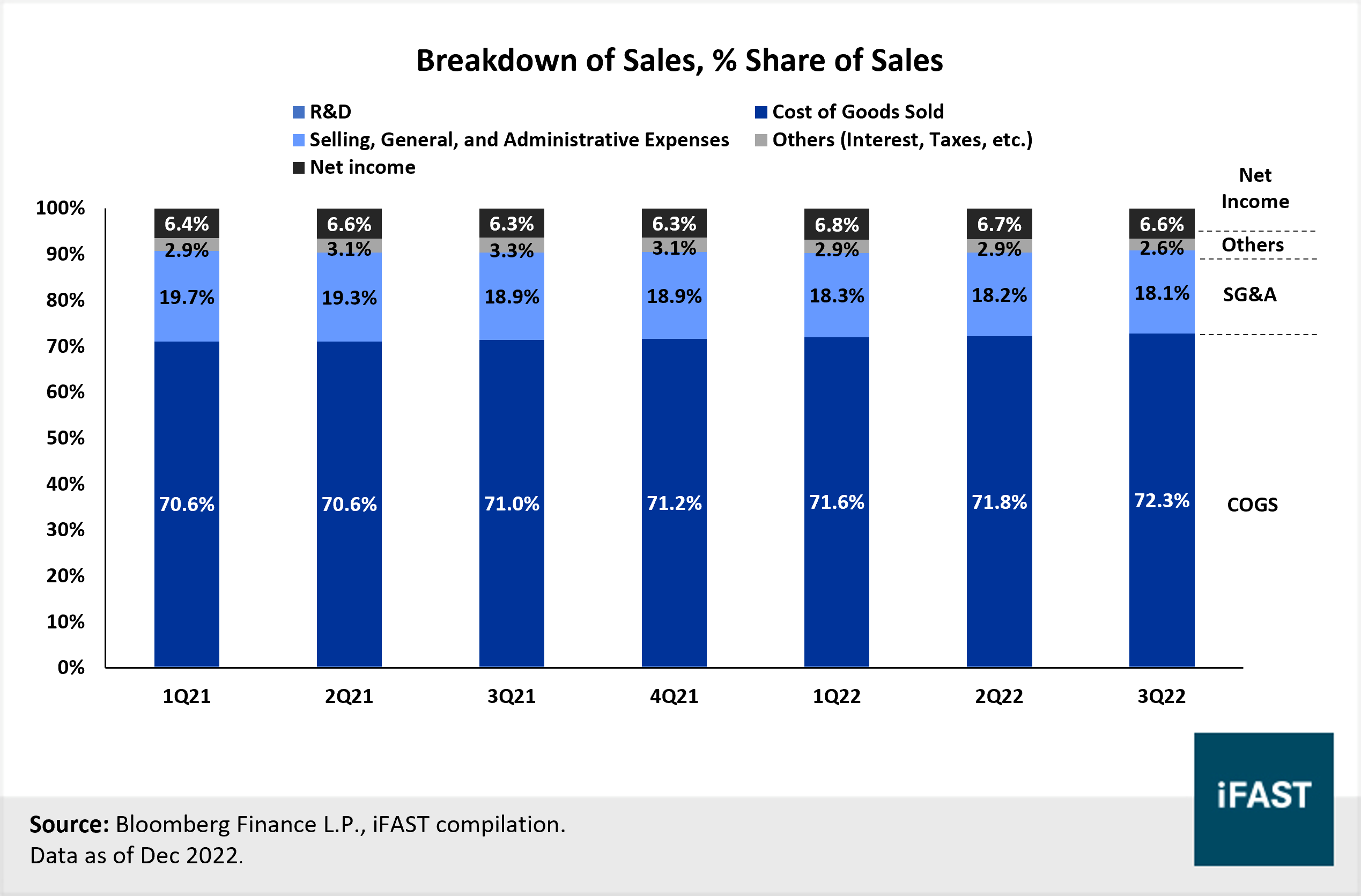 Despite higher input costs (COGS), the sector has maintained its net income margin by largely cutting back on cut back on selling, general, and administrative expenses.

Margins holding up despite rising costs

Despite the backdrop of heightened inflation, earnings for US consumer staples companies have remained relatively resilient. In 3Q 22, the sector delivered strong sales and earnings beat of 2.6 per cent and 6.2 per cent respectively, surpassing the 10-year quarterly average of 0.5 per cent and 4.3 per cent respectively. Sales growth and sales surprise are still largely positive and broad-based across the sub-industries, suggesting that the price hikes have been relatively effective in buffering rising cost.

A breakdown of aggregate sales for the consumer staples sector shows that input costs, such as raw materials and packaging, have risen slightly throughout the year, reflected by an increase in the share of cost of goods sold from 71.2 per cent (4Q21) to 72.3 per cent (3Q22).

This has led to a compression in gross margins, which is a common observation across most S&P sectors.

Across many companies within the sector, we also observed a cutback on marketing and promotion expenses, one of the larger cost drivers for the sector, in a bid to offset higher costs and as demand remains anchored by a consumer trade-down. This is reflected by the decline in the share of selling, general, and administrative expenses (SG&A), from 19.7 per cent (1Q21) to 18.1 per cent (3Q22). This protected profit margins this year, which even rose when compared to 2021.

Companies are also starting to cut jobs and wages with Pepsico – an industry giant and often a bellwether – joining the layoff bandwagon. We think this signals an increasing inclination that even defensive companies are willing to adopt harsher measures to slash costs. Overall, with input costs likely moderating next year and companies demonstrating the ability to defend margins, as well as a willingness to further cut cost, we expect margins to remain resilient.

Aside from the inflation worries, another primary concern for equities is earnings resiliency as growth continues to weaken while recession risks rise. Often, this is not a key concern for the consumer staples sector as earnings tend to be better protected and demonstrate less severe downside in times of softening economic growth.

A primary reason is that the demand for consumer staples is relatively inelastic and non-cyclical as these goods are widely considered non-durable and essential in day-to-day life.

Fundamentally, this means that companies tend to possess predictable and resilient earnings that are less sensitive to changes in the business cycles, even during recessions.

This is evident when comparing the US sectoral earnings decline and negative revision (on EPS estimates) over the past three decades, across four recessions since 1990.

The resilient earnings extend beyond recessionary years, as growth rates have largely remained positive on a year-on-year basis over the past three decades, with only three years of negative growth.

The US consumer staples sector has a reliable track record of outperformance during recessions.

Over the past three decades, across four recessions, the sector has managed to beat both the market (S&P 500) and most sectors during the 12 months before and after the start of a recession.

On average, the sector generates a return of 14 per cent in the 12 months before and 10 per cent in the 12 months after a recession. Again, this is attributed to the sector’s defensive nature and having one of the lowest beta to the market (gauged by S&P 500) which implies that sell-offs tend to be relatively milder. Collectively, the strong track record of earnings resiliency and outperformance before and after the start of a recession add to the consumer staples sector’s reliability as a strong recession play.

Strong support from resilient US consumers

US consumers have remained resilient relative to their global counterparts amidst this challenging environment. Real consumer spending continues to increase month-on-month (in October 2022), with levels above its pre-Covid trend.

The robust spending has largely been fuelled by a drawdown in savings, with the personal saving rate falling to a near all-time low (in October 2022). With limited ammunition in terms of savings, spending will be incrementally dependent on income.That said, the US labour market remains tight, with better-than-expected gains in non-farm employment and a steady employment rate (in November 2022). We do see signs of cooling, such as the decline in jobs opening (in October 2022) and average hours worked weekly (in November 2022).

Lastly, household balance sheets remain healthy as liquid assets are near an all-time high, while debt servicing as a share of disposable income remains near historical lows despite rising household debt.

A healthy balance sheet should limit the risk of drastic spending cuts in the event where income falls and unemployment climbs.

In our view, the relatively resilient US consumers supports the case for US consumer staples sector when compared to its global peers. The sector possesses an outsized 50 per cent – 60 per cent revenue exposure to the US and comprises of many large industry leaders with brand names easily recognisable by the US consumer (and global, to a large extent).

Valuations are rich but not a major pushback

The US consumer staples sector is currently trading at a forward PE of 21.7-folds, relative to the 10-year average of 19.6-folds. The sector may be trading at a premium but this is not a major pushback for us, especially heading to a potential recession. In our view, as growth weakens further, the sector’s earnings resiliency will likely keep valuations anchored.

Compared to other sectors where valuations may increase as earnings estimate plunge, multiples for consumer staples could become increasingly palatable on a relative basis.

Also, as macro and earnings risks intensify, we think valuations for the sector can remain elevated. This can happen when investors re- allocate from cyclical and growth sectors back to defensive ones.