Saturday, January 28
You are at:Home»Features»Tradition that brings folks together
For the freshest news, join The Borneo Post's Telegram Channel and The Borneo Post on Newswav. 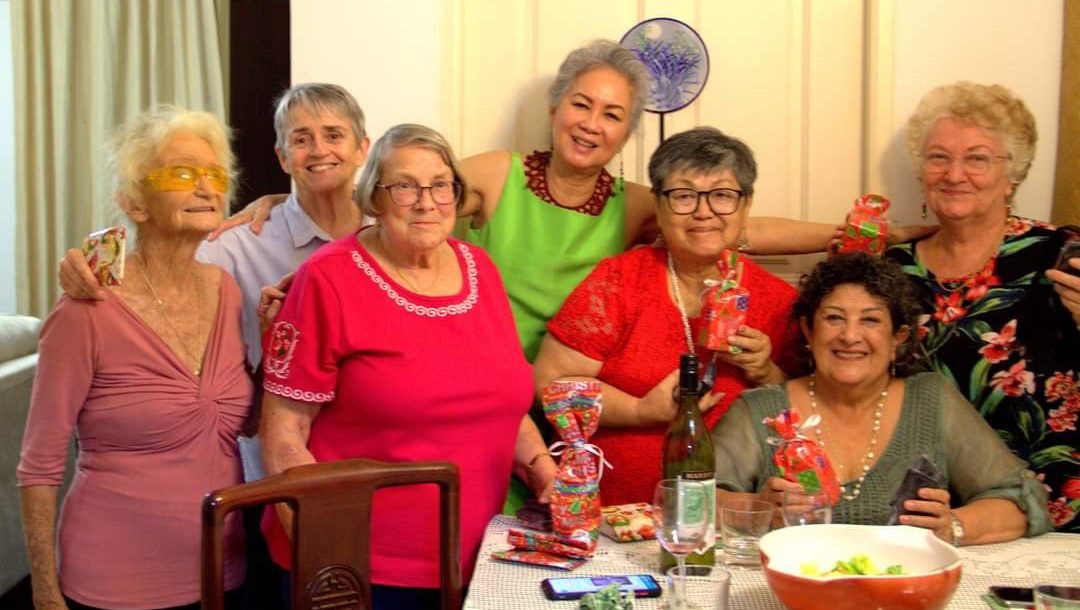 (Standing front, from left) Colette, Florence, the writer and Lesley Linggod in a group photo with Dominique (standing back, left), Koh and Jacqueline (seated).

CHRISTMAS has always been a special time for a group of elderly women expatriates in Miri, who have long regarded this city as their home.

It is during this festive season that they would hold their unique ‘Miri Ladies Christmas Dinner’, which they have been doing every year – except during the height of the Covid-19 pandemic where the Movement Control Order (MCO) restrictions were in force.

“I have been in Sarawak since 1974. Time’s gone so fast, like a blink of an eye – I vividly remember what Christmas was like in Miri when I first arrived,” said Lesley Linggod.

“For me, I just want to feel the spirit of Christmas, living so far away from Australia, from my family there, and to enjoy some turkey and wine!

“Living in the ‘ladang’ (plantation) where my young husband was working then, we could not get hold of a turkey, or a small portion of lamb for Christmas.

“So this ‘Miri Ladies Christmas Dinner’ was like the answer to my prayers,” she reminisced.

Florence Enau, 80, whose husband Jimmy Layang was then working with Shell, came to Miri in 1976.

Hailing from California in the US, she then worked as a Peace Corps volunteer. She was a kindergarten headmistress just before her retirement in 2006. 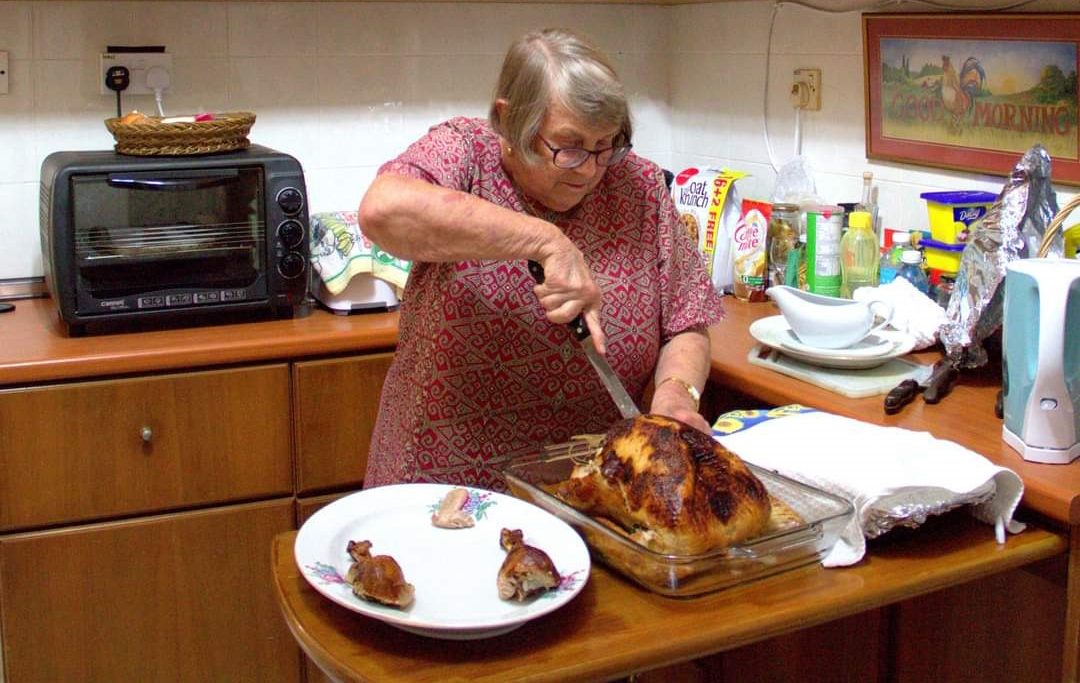 Florence, the host of ‘Miri Ladies Christmas Dinner 2022’, carving the turkey for all to enjoy.

Like Lesley Linggod, she also regarded their annual Christmas dinner as ‘a unique tradition’.

“It’s always been called ‘Miri Ladies Christmas Dinner’. It was first held at the Gymkhana Club Miri in the 1970s – which exact year, no one can really remember now.

“The (late) Datin Jill Lampam, who was wife of then-Miri Resident, did her best to make all the new ‘expat ladies’ feel at home; to be acquainted to local life.”

Adding to what Florence had said, Lesley Linggod said Jill was the organising head of many functions at the Gymkhana Club, all meant to make the expatriates, many of whom were Shell personnel, feel at home.

Lesley Linggod also described the GCM library as a great place where the expatriates could get hold of quality reading materials from overseas, such as really good books from the UK and the Netherlands.

“In those days, reading was still an important activity and it helped the expats connect with their home countries.”

Organising the Miri Ladies Christmas Dinner was never ‘a piece of cake’. The host would need to make a list of those wanting to join, and then get the menu agreed upon.

Back then, the Gymkhana Club was able to cater – Christmas turkey and all the goodies.

Back on the menu: the host must make sure that the guest would get the items that they wanted.

Some requested only fish; some liked turkey; some would want lamb; and then, there were the vegetarians. Each of them paid good money, so their requests and preferences must be taken into account. 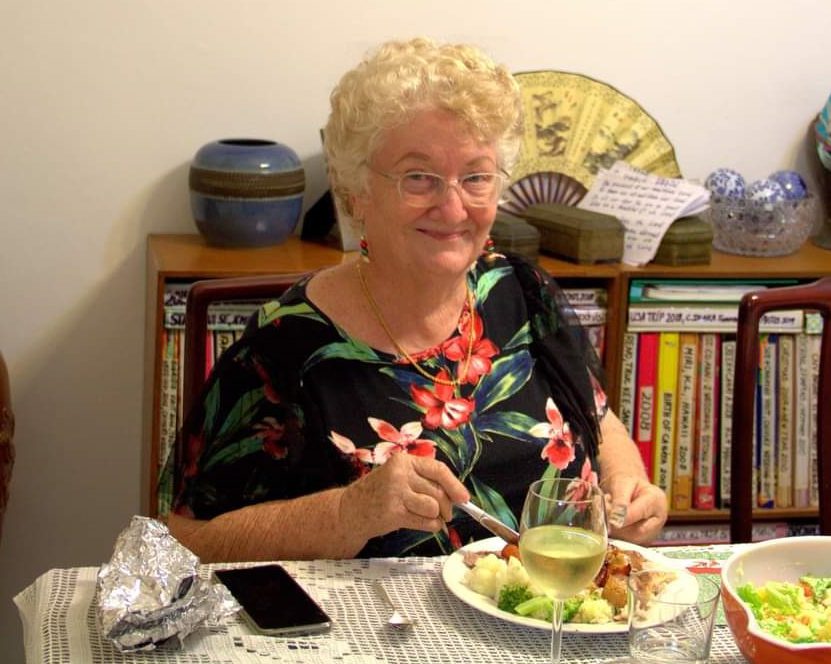 According to Lesley Linggod, the organising chairperson would start confirming the guest list in November.

“There were some years when the dinner only had small groups. This reflected the exodus of expat families who left Miri in 1997, during the economic downturn and Shell’s company restructuring. Plus, catering and organising were not be easy because of the dynamics of social life in those days.

“Still, those who confirmed their attendance truly looked forward to a special evening meant for them.”

She said one of the things that she would always remember from her young days working as a waitress at the club was ‘that delightful punch for the ladies’.

“Yes, in those days wines and beers were permitted in the club. Punch was also offered in the menu.”

It is said that punch was a British invasion, but many have argued that the original idea came from India. The name is said to have derived from the Hindi word for ‘five’, pāñć – most likely referring to the common five elements of this mixed drink: alcohol, sugar, juice from either a lime or a lemon, water, and spices. 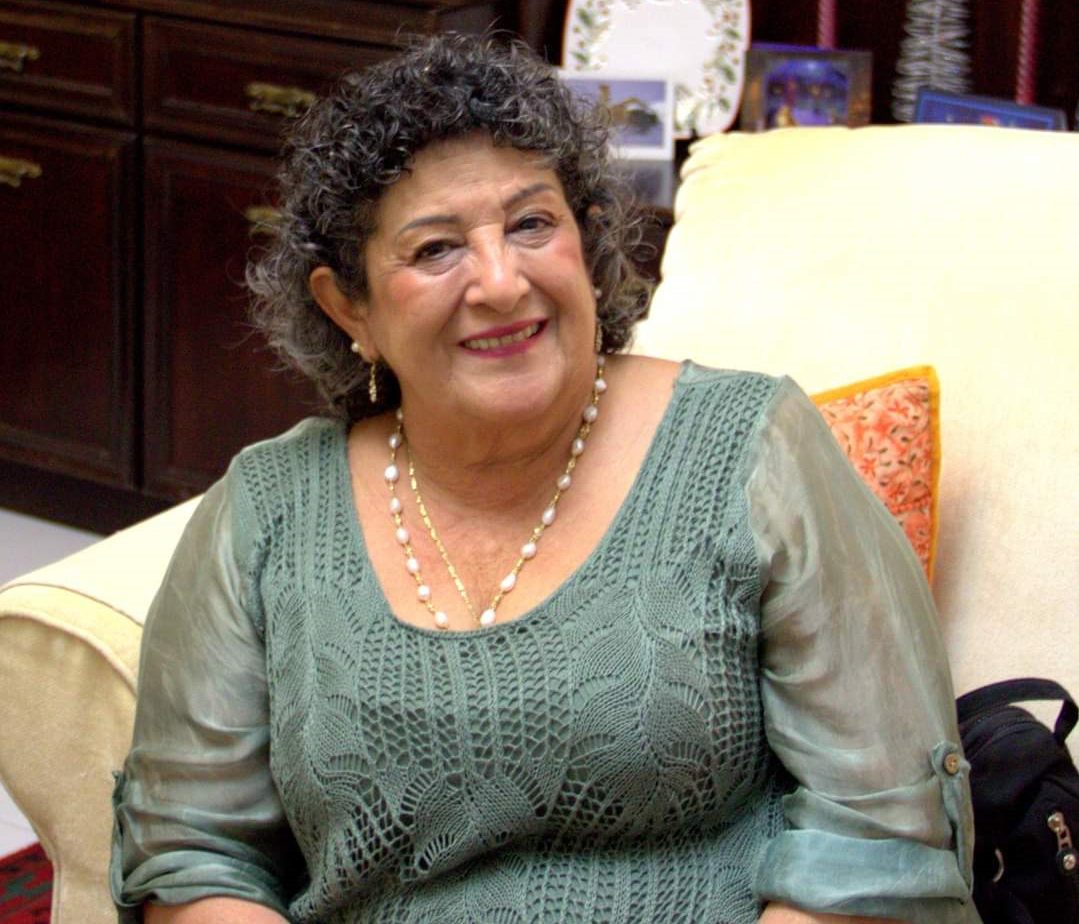 Jacqueline strikes a smile for the camera.

On the other hand, some also believe that the word originated from the English’s ‘puncheon’ – an old volumetric term to classify the sizes of barrels used to store liquid – usually wine – on board ships.

Punch was introduced to England by the employees of the East India Company in the late 17th century, and from there, it spread into other European countries. When served communally, the expectation would be for the drink to have lower alcohol content than the typical cocktail.

It is worth noting that the term ‘punch’ was first recorded in English documents in 1632. At the time, most punches were of the ‘wassail’ type (related to cider or spiced ale), with a wine or brandy base. However, around the mid-1650s, Jamaican-produced rum came into use, and the ‘modern punch’ emerged.

“Many people would remember that in the 1980s, Miri was ‘a town of milk and honey, with ever-flowing alcoholic drinks’,” recalled Missy.

“Beer was the same price as Coca-Cola from the jungle sources, or the ‘jalan tikus’ (so-called ‘rat’s trails’) via the border with Brunei.

“Those enjoying a bit of alcohol would have more than a glass and thus, they would tend to stand around the punch bowl longer.”

Lesley Linggod and Florence both agreed that the highlight of every past Miri Ladies Christmas Dinner would be the singing of the Christmas carols.

Florence would type the song sheets – she still keeps the old copies. 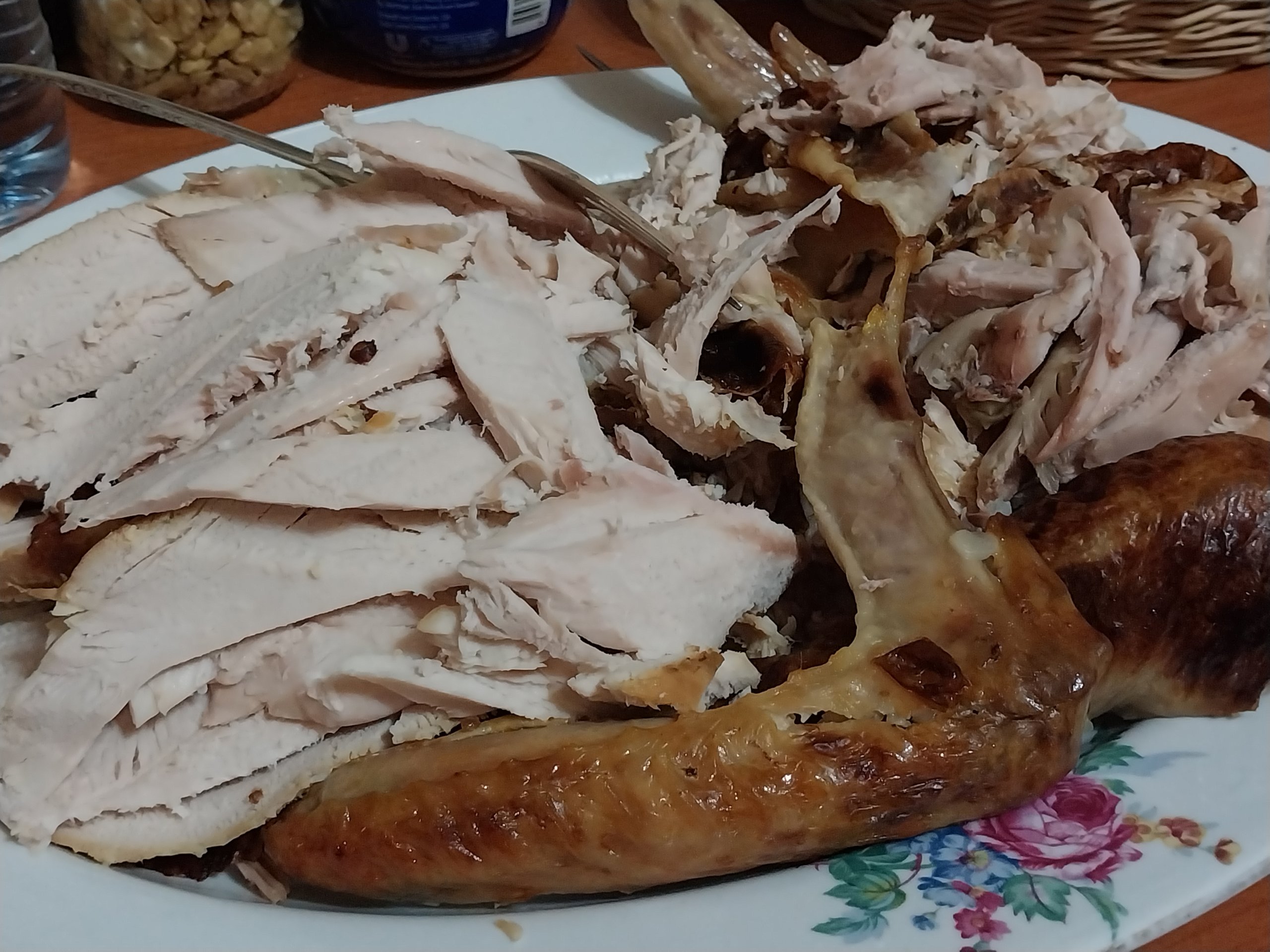 Roast turkey – a must for the ‘Miri Ladies Christmas Dinner’.

However in the 1990s, the karaoke culture arrived and the Gymkhana Club was among a few establishments in Miri that invested in some good sets, which it made available for all kinds of events.

It was around this time when the club no longer became the hosting venue for the Miri Ladies Christmas Dinner, and the carolling began to die out.

For Lesley Tan, an English teacher married to Mirian Tony Tan, the Christmas dinners in the old days would always have a husband of a friend acting Santa Claus – white beard, cap, belt, boots and all.

“He would come to help with the gifts, and he gave the ladies a wonderful time. Photographs were taken.

“He even shouted the signature catchphrase ‘Ho Ho Ho!’ throughout dinner,” said Lesley Tan, a Briton who first arrived in Miri in 1981.

However, like the carolling, Santa no longer made any appearance after the mid-1990s. The gift-exchange, meanwhile, continued for several more years after that. 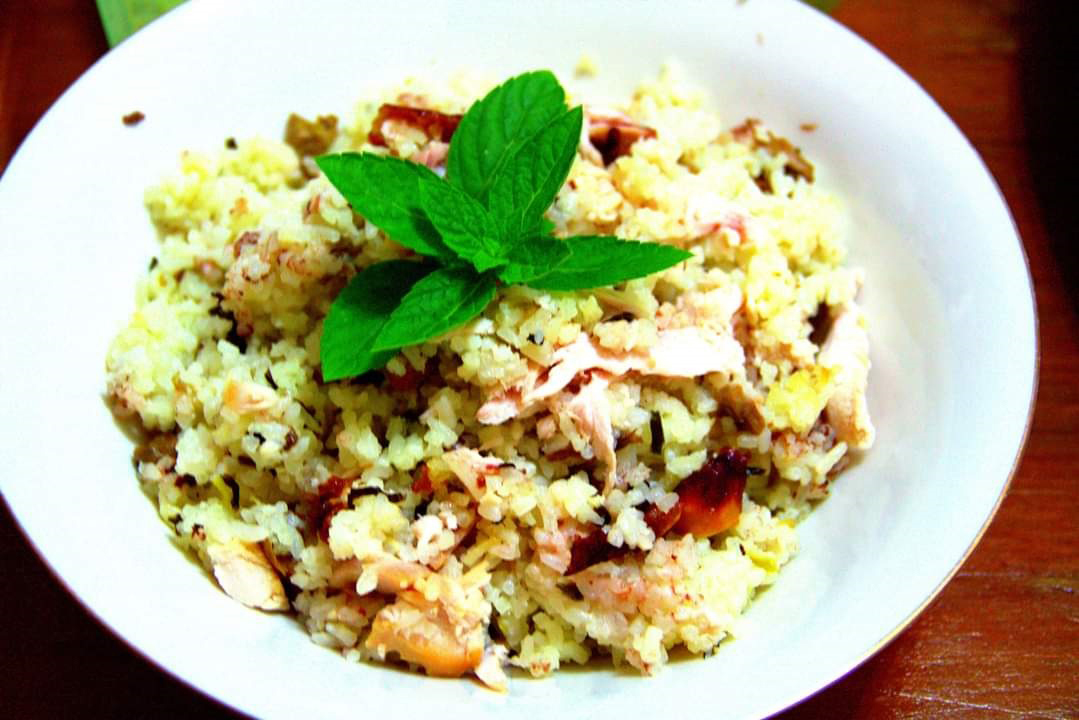 A Christmas turkey can never be complete with the stuffing.

Post-Gymkhana Club, the hosting of the Christmas dinner moved to restaurants around the city such as Miri Café, The Highlander, Piasau Boat Club and Zeppelin.

Nonetheless, amidst the changes, the turkey on the menu remains an enduring element of this gathering.

Having not held the Christmas dinner during the pandemic, the ‘expat ladies’ went all out in having it this year, with Florence hosting.

Each one of them contributed to the menu: Lesley Linggod made her famous Australian trifle; Jacqueline Buri, a Venezuelan, prepared the whole turkey and lamb; Dominique Dodge Wan, who is British-Belgian, brought salads; the pumpkin soup was from the American couple Jim and Judy Douglas; and wines were courtesy of Marilyn Koh, who hails from Brunei.

Colette Mohan, 92, brought her smile and lots of stories. She first came to Miri more than 30 years ago and before that, she had lived in Singapore and Bali. Today, she has family members living in Argentina, and she still has a house in her home country France.

Colette spends over months in Miri every year.

“I love Miri for its warmth, and the fantastic friends.

“I am happy. Isn’t that important?” 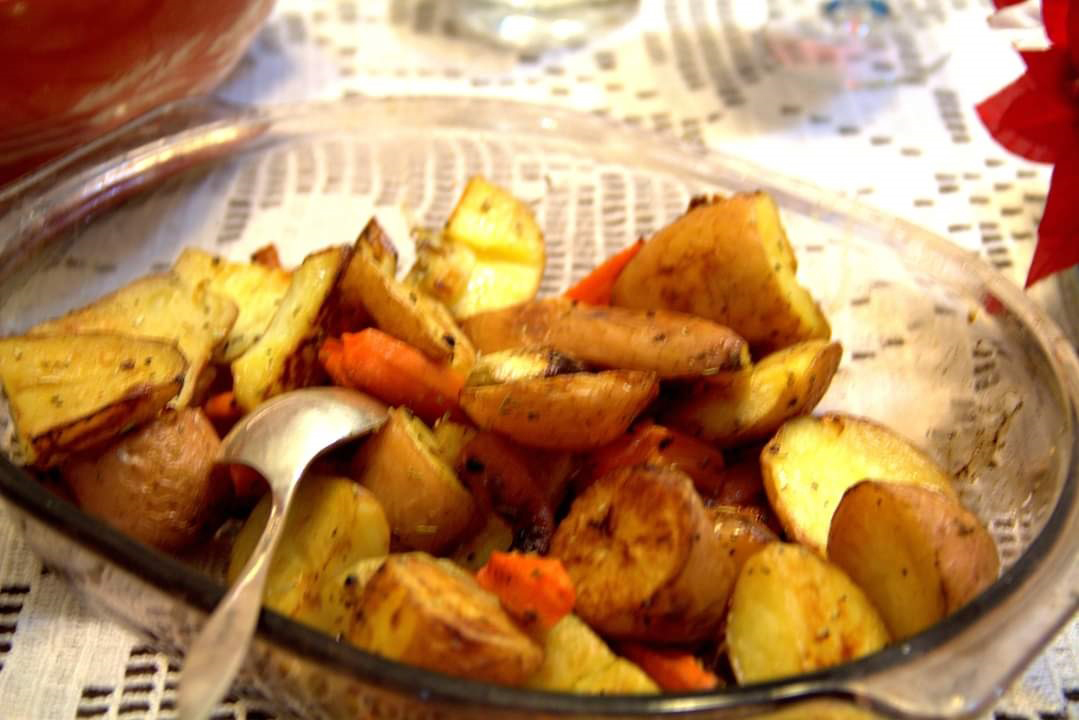 The traditional English roast potatoes and carrots are among the must-have menu items for the occasion.

The youngest of the group is Judy, a teacher and photographer now in her 40s. She and Jim have been in Miri for more than 20 years.

“This is the best Christmas dinner by far – food’s marvellous!

“In the past, I would come and take photographs.

“If we, the ladies, could get ourselves organised, we could definitely make it happen again next year.

The annual Christmas dinner represents much more than just a once-a-gathering for these expatriate women.

Over the years, their lives have intertwined with one another and thus, they have formed a close-knit community. 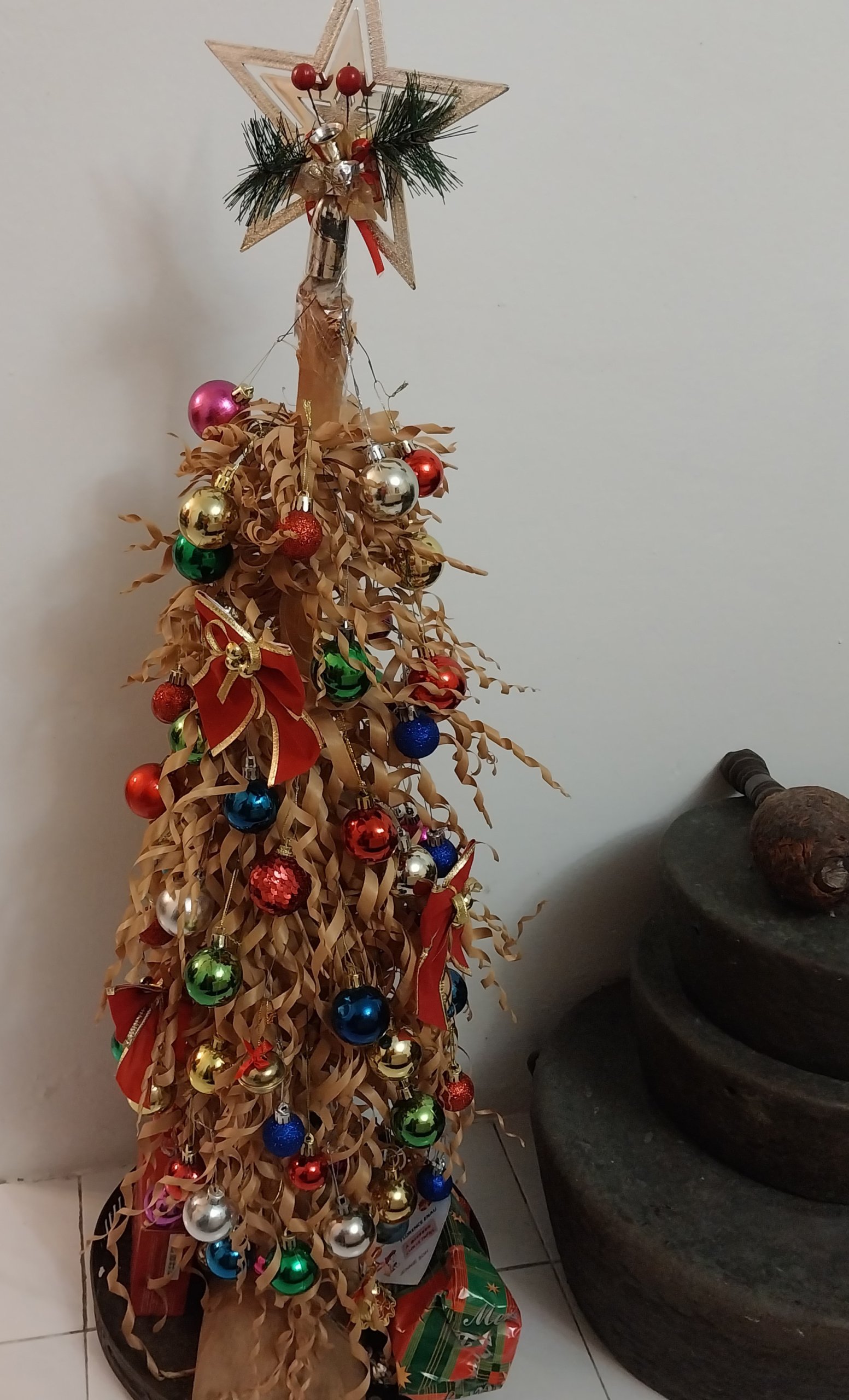 They have been able to withstand the changing times – the best, the worst and all.

Each of them regards the Christmas dinner as a gift – a reward for them after having worked so hard throughout the year; a time to let their hair down; and of course, the chance for them to really enjoy a well-deserving feast.

“It’s a unique tradition that must be preserved, because to me, it is a part of Miri’s social history,” said Lesley Linggod.

Previous ArticleCommitted to lifelong crusade of caring
Next Article Ports have a pivotal role in PCDS 2030 attainment, says Uggah